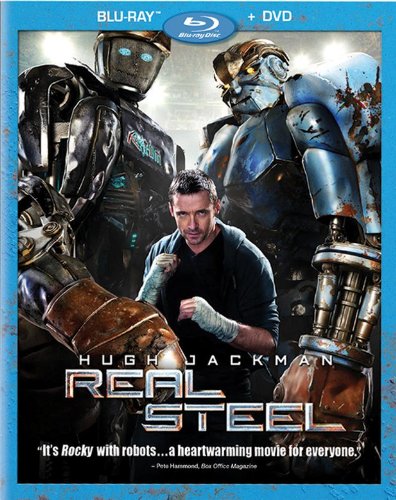 first arrived for me to review, my initial thought was, “great, a movie about Rock ‘Em, Rock ‘Em Robots! Just what the world has always needed.”

It turned out that it was actually more like one of my favorite episodes of the Twilight Zone. My pre-conceived notions about the plot notwithstanding, it is a fun movie. It’s definitely a popcorn flick, and one you might want to mentally check-out of before watching. The plot, that a man fights robots in the future world of high-tech boxing, is far-fetched and the film is at times unintentionally humorous. That said, it has some incredible special effects, and is a lot of fun to watch.

In case you haven’t seen the film, in a nutshell, the plot is as follows: boxing has gone high-tech in the future, and Charlie Kenton is a washed-up fighter who was pushed aside when steel robots took over the ring. Instead of being a title contender, Charlie is a small-time promoter who scrapes by with low-end robots from scrap metal as he “tours” underground boxing venues. After hitting rock bottom, Charlie reunites with his son, Max, to build and train a contender. What follows is a magical story of their comeback. As preposterous as this may sound, the actors really sell the story quite well, even if the concept is a bit out there and the writing is fairly predictable. Like I said at the outset, just have fun watching the movie–don’t over-think it.

I remember back when Blu-ray was in its infancy and stores were using Pirates of the Caribbean to show off the stunning visuals the format can offer. Well, one Disney film has replaced another, as Real Steel’s 1080p transfer easily could make it the new “display” movie to show off the format. Disney has done an amazing job with the video quality here–everything is perfect. It’s sharp, pristine, richly colored, and just plain beautiful.

The DTS-HD 7.1 sound here is as impressive as the video (even on my 5.1 system). As a film that not only features loud noises and thundering effects but also quiet dialogue and light ambiance sounds, this title renders its audio very well. The track sounds exceptional, without any odd use of the channels.

Rounding out the disc is a wealth of extras that might appeal to fans of the film. “Ringside with Director Shawn Levy,” “Countdown to the Fight — The Charlie Kenton Story,” “Making of Metal Valley,” “Sugar Ray Leonard: Cornerman’s Champ,” and “Building the Bots” all take a behind-the-scenes look at the creation of the film. There are also deleted scenes, a bloopers reel, and trailers.

Overall, if Reel Steel is a film that interests you, it’s worth picking up Real Steel Two-Disc Blu-ray/DVD Combo

. The audio and video quality are exceptional and the line-up of extras is solid. It’s a fun movie–definitely something you can pop in and watch to relax on a Saturday night with some homemade popcorn.