During the 2022 D23 Expo, Disney shared new details about the Fantasy Springs expansion coming to Tokyo DisneySea. In this post, we’ll take a look at what was shared on the show floor, including photos of ride vehicles, video of construction progress, and commentary about OLC’s leadership.

For those who haven’t been following its development, the overarching theme for Fantasy Springs is a magical spring leading to a world of Disney fantasy–it’s basically a loose concept for a Fantasyland-style port that brings Frozen, Tangled, and Peter Pan to Tokyo DisneySea, with separate areas for each tied together via magical springs.

The new area will be located in the far corner of the park, behind Lost River Delta and Arabian Coast, in the largest unused parcel at Tokyo Disney Resort. Fantasy Springs will be the most expensive expansion to any theme park anywhere, ever. It’ll cost triple the amount of Tokyo Disneyland’s large scale expansion that included a Beauty and the Beast mini-land and more, and over double the cost of Star Wars: Galaxy’s Edge.

Suffice to say, Fantasy Springs is blockbuster addition. It’s far and away the largest expansion project currently underway in any Disney theme park in the world. While Oriental Land Company (owner and operator of Tokyo Disney Resort) hasn’t released the specific budget for each attraction, our guess is that it’s also home to a few of the top 5 most expensive rides currently under construction, as well.

Speaking of which, let’s start by taking a look at the ride vehicles for each attraction, which were featured on the show floor at the 2022 D23 Expo… 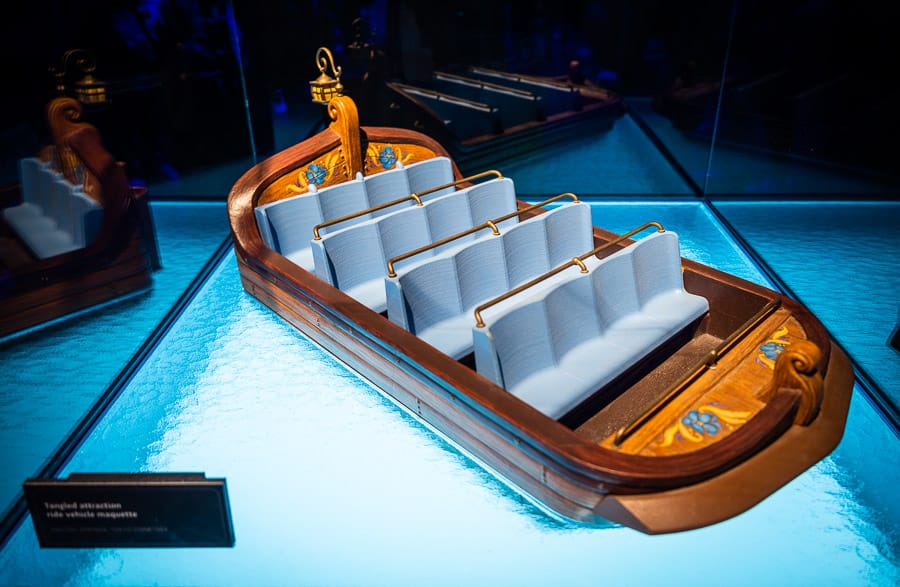 First up is the Tangled boat ride.

The Tangled area will also offer a boat ride where guests board gondolas for a romantic tour of Rapunzel’s “best day ever” as she journeys with Flynn to the lantern festival. This will culminate in countless flickering lanterns that illuminate the attraction’s finale while Rapunzel and Flynn sing an iconic song from the film. Sounds better than bathrooms. Maybe. 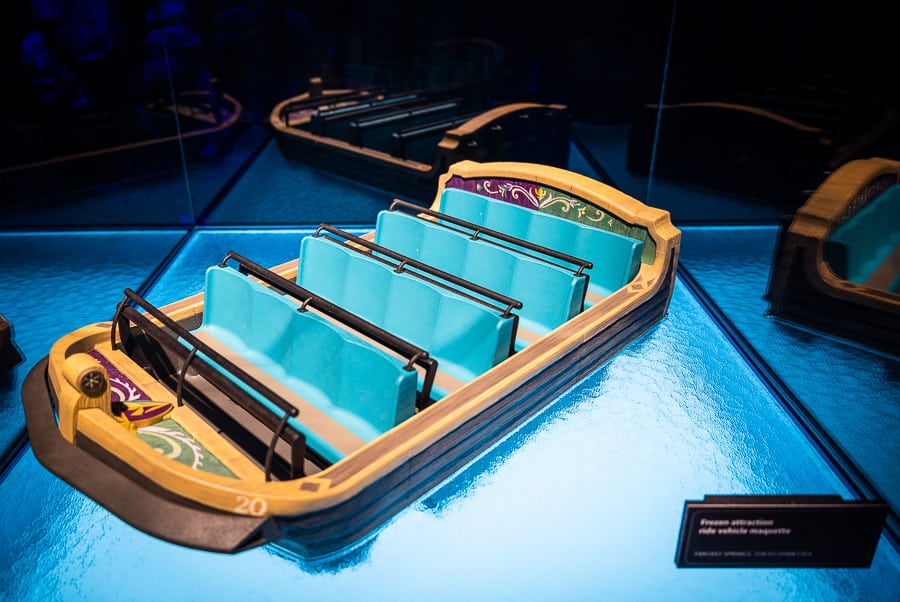 The Frozen area will feature another boat ride. This attraction tells the story of Elsa and Anna with iconic songs from the film and surprising thrills.

There has been a lot of speculation that this is simply Frozen Ever After, but built from the ground up rather than being a retrofit. Even assuming that’s true, it leaves a lot of room for improvement. Disney shared a video of the Elsa Audio Animatronics during the parks presentation, and she was stunning. 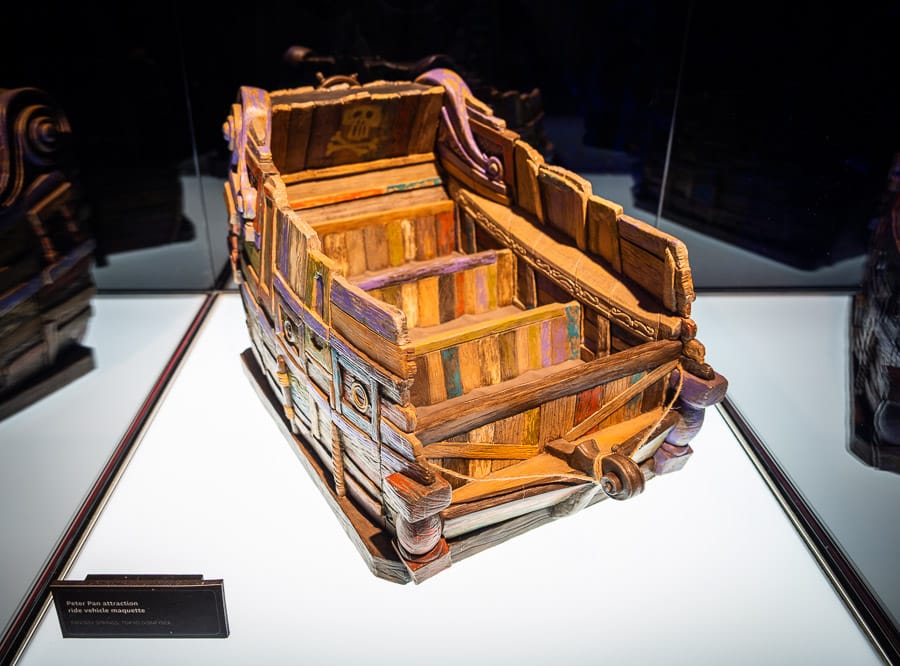 Next, we have a ride vehicle for one of the two Peter Pan attractions. The main Peter Pan attraction will be a boat ride as guests board boats to chase Captain Hook and his crew of pirates who have captured Wendy’s younger brother; Tinker Bell sprinkles the boats with pixie dust, guests fly through Never Land on an adventure that features iconic music and dynamic imagery.

This ride vehicle is absolutely adorable. It looks like the handiwork of the Lost Boys themselves, with patchwork construction and colors reminiscent of madras shorts. 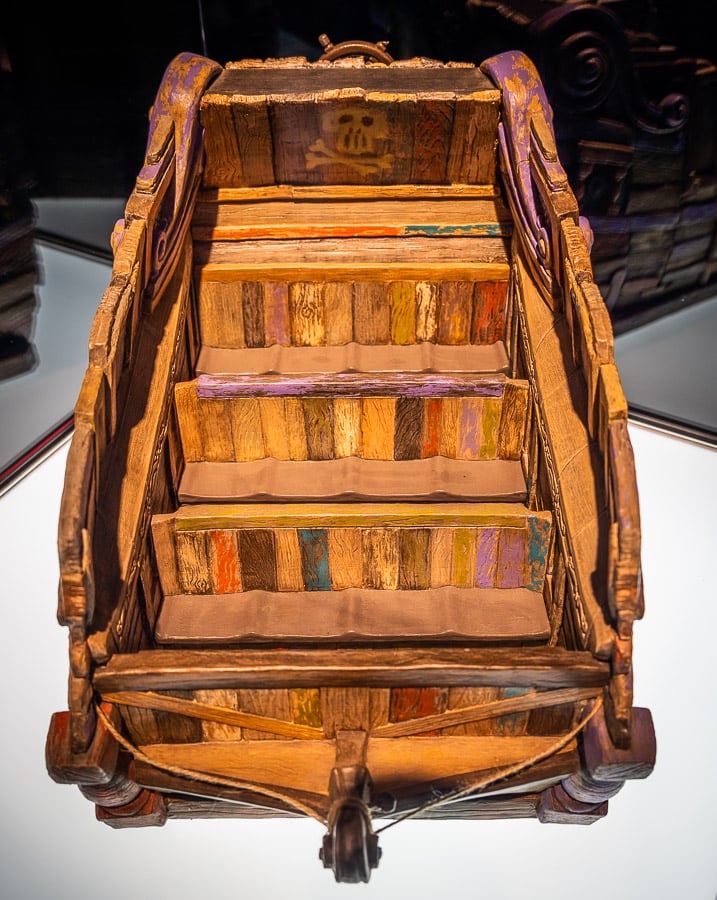 Based on the description and some semi-informed speculation, we’re expecting the main Peter Pan attraction to use technology similar to Pirates of the Caribbean: Battle for the Sunken Treasure at Shanghai Disneyland.

Notice the high walls around the side of the Peter Pan ride vehicles, which are common for (good) screen-based attractions, as they direct guests’ view towards the action and help maintain suspension of disbelief. (This actually looks vaguely like one of Universal’s screen-based ride vehicles.) 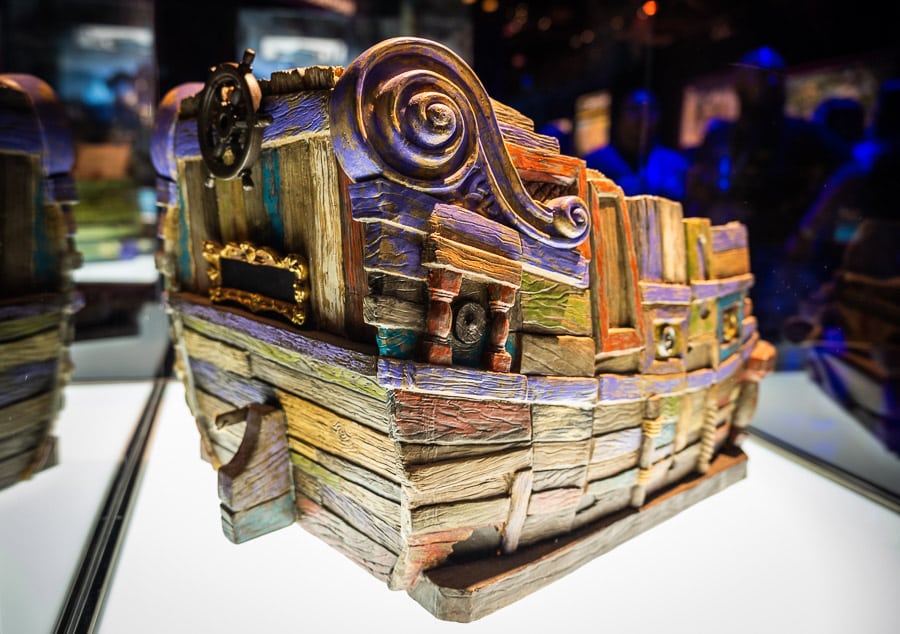 Judging by show building sizes, this Peter Pan attraction is massive. We’re expecting it to be the flagship attraction in Fantasy Springs.

Here’s hoping that, like Battle for the Sunken Treasure, it seamlessly blends screens and physical sets, incorporating practical props and effects alongside screen-based scenery. It’ll definitely be a disappointment if this is just the Rat Ride, but with pirates. 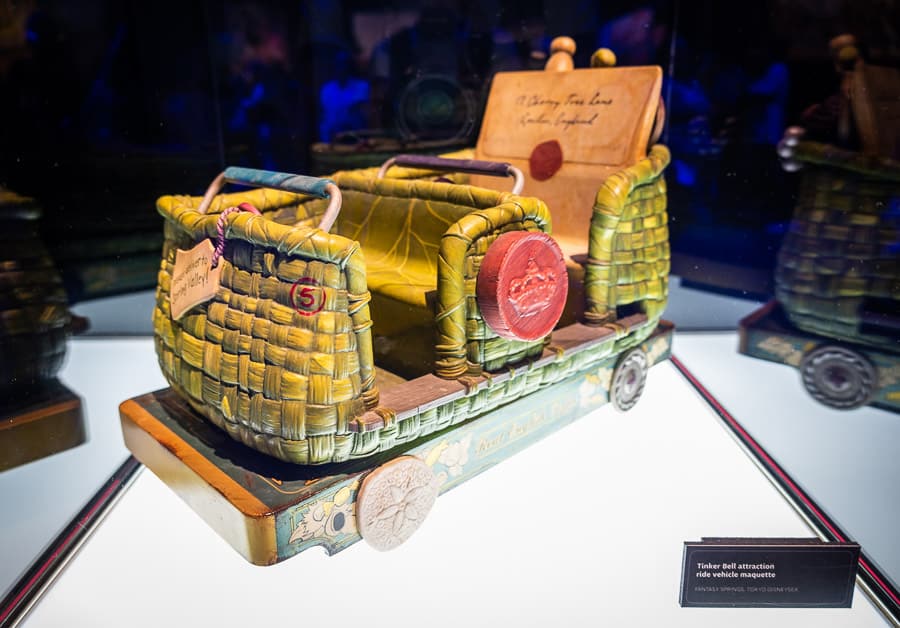 The other attraction in the Peter Pan area will take guests on a tour of Pixie Hollow’s oversized world.

We’re expecting this to be cute, but that’s about it. Perhaps it’ll pleasantly surprise! (I’m actually really looking forward to this, I just don’t want to overhype that attraction with what’s reportedly the lowest budget.) 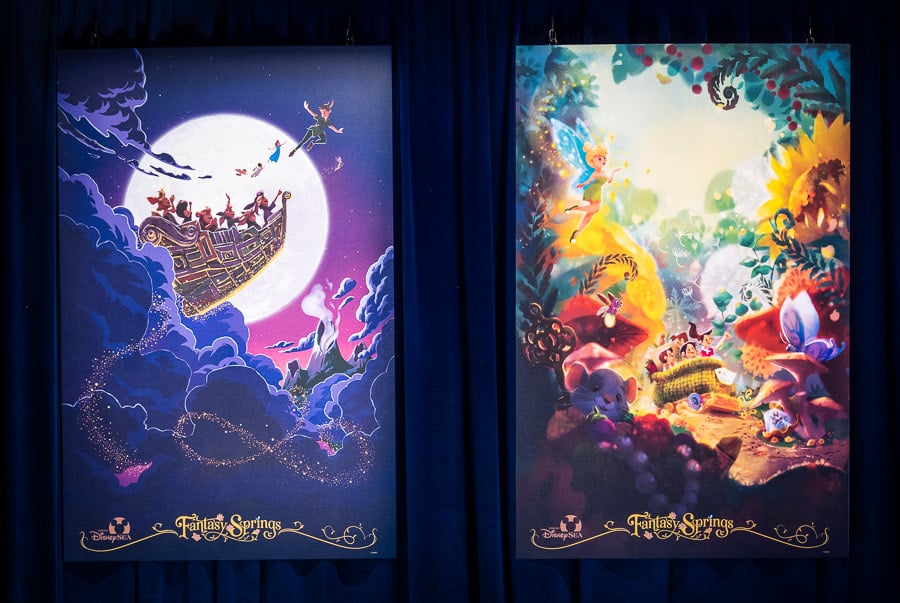 Next up, we have newly-unveiled attraction posters.

I like how both of these actually incorporate the ride vehicles into them. That’s not something you see often with attraction posters, let alone two for the same land. In this case, I think it makes perfect sense, giving the posters the personality and highlighting the really cool vehicles! 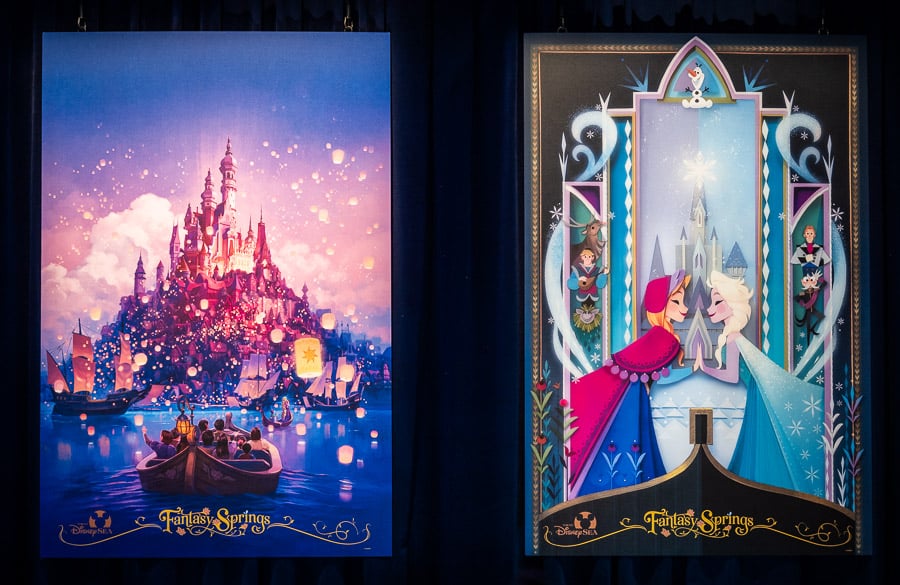 Can we count the curvature at the bottom of the Frozen poster as being its boat? If so, all four ride vehicles are featured in the Fantasy Springs attraction posters. That has gotta be a record.

Personally, I’m most excited for the Tangled attraction. I’m not basing this on any insider info or even informed speculation. I just think the lantern festival really lends itself well to a wow-inducing ride-through scene. It seems like such an obvious candidate for a great boat ride. (And yet, over a decade after the movie, this will be the first Tangled attraction!)

Next, here’s a video showing the progress of Fantasy Springs, which is preparing to open sometime between April 2023 and March 2024:

Finally, I want to share a bit of a “humblebrag” but something that’s also illuminating with regard to how Oriental Land Company operates.

We’ve posted a lot from D23 Expo, but most of this came out of the big parks presentation. We also attended a half-dozen or so smaller-scale parks panels over the course of the weekend. These dealt with topics ranging from S.E.A. to the history of Disney Ambassadors. Eclectic stuff focused on history and themed design, basically.

Someone else was in every single one of those theme park panels with us, and we finally had the opportunity to ask for his photo after the final one of the weekend: 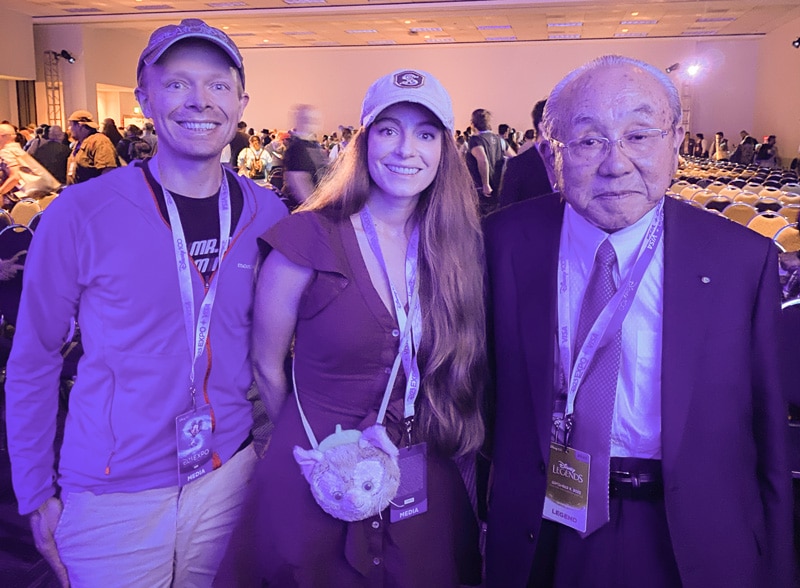 That’s Disney Legend Toshio Kagami, Chairman and CEO of the Oriental Land Company. He has been with OLC and its predecessor before that since he was 22 years old, and became president of the OLC in 1995. Kagami-san was in that role during the construction of Tokyo DisneySea, and has been CEO since 2005. He is now overseeing the latest large scale expansion of Tokyo Disney Resort.

He and the large OLC delegation were very active and highly visible throughout the weekend at D23 Expo, taking photos in the booths and enjoying panels. I never once saw a high-level executive from Disney in a panel that was not one of the flagship presentations (although I did see a couple of them on the floor). 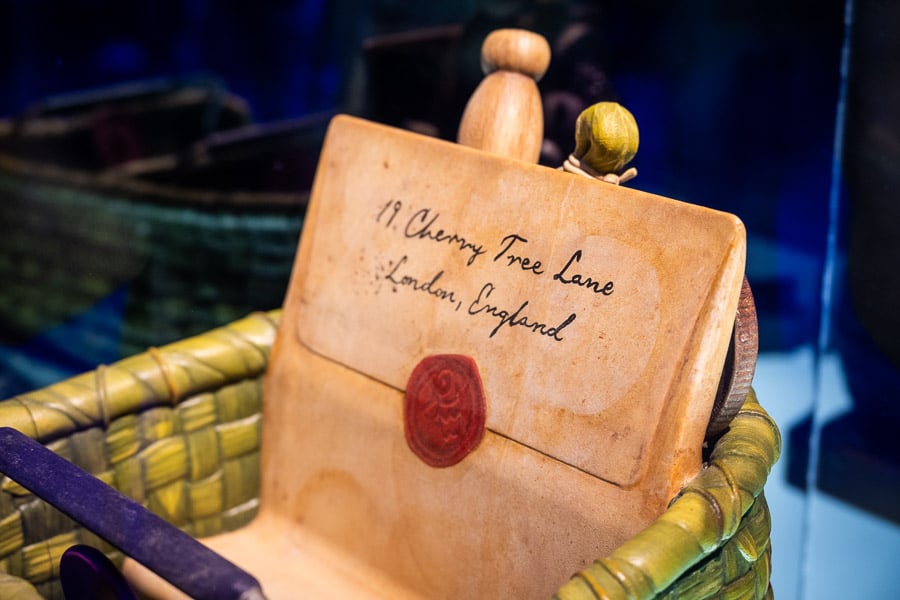 I don’t know why Kagami-san attended presentations about history, Imagineering, etc. Perhaps he was simply being respectful to his hosts–but he probably could’ve done that without keeping a jam-packed scheduled. My assumption is that he’s genuinely interested in theme parks, or at the very least, wants to be informed about his line of business.

I cannot imagine leaders at this level of the Walt Disney Company visiting Japan and doing likewise. I can’t even imagine them doing this at D23 Expo, which concerns their own company and business units. They just do not seem to care that much about theme parks (at best) or feel the parks are beneath them (at worst). 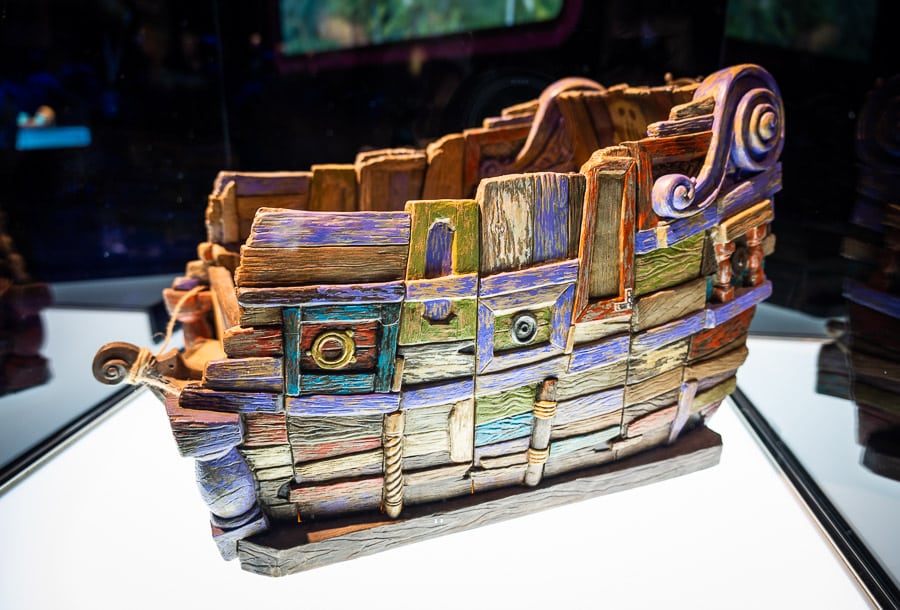 This is one of the reasons that, to this day, I still like Josh D’Amaro. While I doubt he’d go as far as Kagami-san, he has a strong track record as a presence in the parks, even when there isn’t a photo op or PR benefit. I’ve long felt that things would be different at Walt Disney World if the executives had to deal with everything a normal vacationer does or even enjoyed the parks as normal guests.

Kagami-san and his posse being everywhere at the Expo underscores to me the difference between OLC and Disney. Things like this are illustrative of the little ways that OLC is like Disney of a bygone era, and I think that shows up in the guest experience. Maybe he had other reasons for attending so many panels and booths during D23 Expo, but I think this nevertheless symbolizes the difference in approaches between OLC and modern Disney. 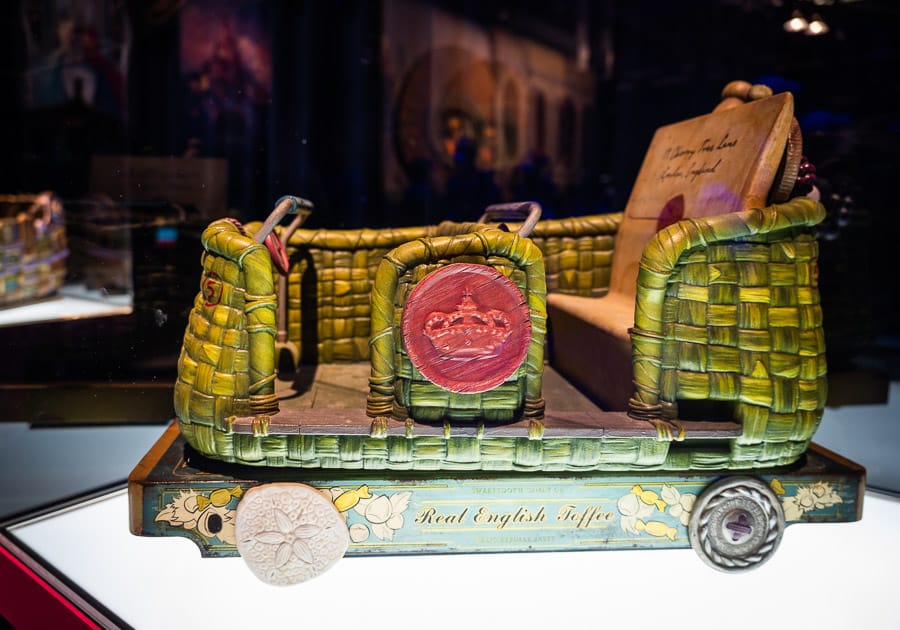 Ultimately, this is a big reason why we are such big fans of Tokyo Disney Resort and (bringing this full circle) are so excited about Fantasy Springs at Tokyo DisneySea. Imagineers didn’t suddenly lose their creative chops or cease having ambitious plans–the problem is that their hands are often tied and budgets are limited at Walt Disney World. (To be sure, WDI has had some big budget blunders, so they aren’t blameless with regard to some recent domestic parks output.)

Fantasy Springs looks to be the defining addition of the decade, and is yet another reason to consider visiting Tokyo Disney Resort. With that said, it’s certainly not the only reason. Tokyo DisneySea and Tokyo Disneyland have been among the top 3 parks on our Worldwide Disney Parks Rankings for ages thanks to their superlative themed design, ambitious attractions, spectacular seasonal events, excellent entertainment, incredible Cast Members, and so much more. If you’re wondering how to recapture the Disney magic, the answer is easy: visit Japan.

What do you think of the Peter Pan, Tangled, and Frozen ride vehicles for Fantasy Springs? Excited for this blockbuster addition to Tokyo DisneySea, or do you not care? Wish the domestic parks would build lands and attractions like this? Do you agree or disagree with our assessment? Any questions? Hearing your feedback—even when you disagree with us—is both interesting to us and helpful to other readers, so please share your thoughts below in the comments!