Disney Vacation Club has published the points chart, pricing, and other membership details for Riviera Resort, which will go on sale later this week. In this post, we’ll share some of these details, as well as some analysis and tips for those contemplating owning at this Walt Disney World hotel.

The 15th DVC property at Walt Disney World, Riviera Resort has already proven divisive among fans (look no further than the comments section on literally any of our construction updates or other posts about the resort). Some have derided the lack of theme, proximity to Disney’s Caribbean Beach Resort, and resale restrictions.

Others are excited about Skyliner transportation to Epcot and Disney’s Hollywood Studios (and by extension, Star Wars: Galaxy’s Edge), the sophisticated dining options, elegant style, and Tower Studio rooms that accommodate two guests. If pricing and point charts are any indication, this polarization is only likely to deepen…

DVC News and members of the Mouseowners forums have uncovered new info about pricing and point charts for Disney’s Riviera Resort. While this hasn’t been officially released by Disney Vacation Club, we’re treating this as news rather than rumor since it’s been discretely posted by Disney, and just not promoted.

Sales will officially begin March 27, 2019. Following that, bookings will begin April 10, 2019 for current members and April 15 for new members. The resort will open December 16, 2019, which is consistent with the cash bookings date. (Quick plug: if you’re thinking about buying at Disney’s Riviera Resort, first be sure to read our Ultimate Guide to Disney Vacation Club, which covers a lot of things you should think about before taking the plunge.) 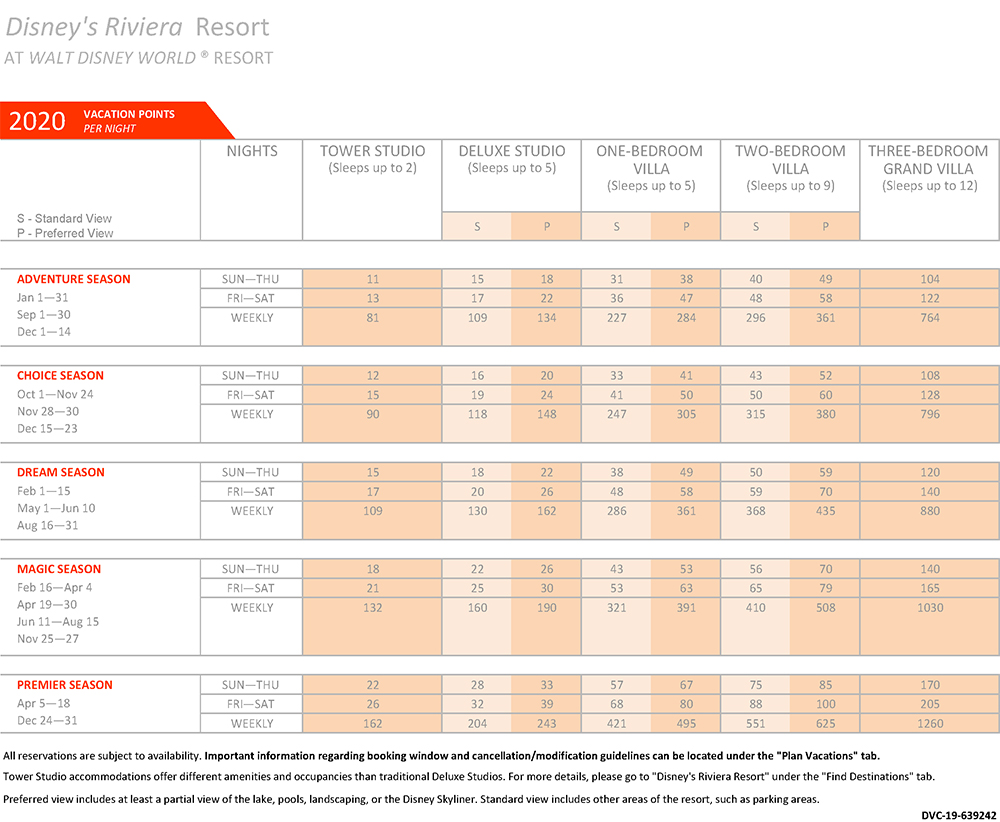 Above is a look at the point chart uncovered by DVC News. I had heard rumors that Disney intended upon positioning the Riviera just below the Villas at Grand Floridian in terms of status, which was something I found implausible. Well, that’s about what we have here, with the exception of the Tower Studio, which has no analogue at other DVC resorts.

Perhaps I’m colored by my bias against this resort, but no matter what the finished product ends up looking like, I don’t view it in the same league as literally any of the Magic Kingdom or Epcot resorts. I’m super hyped for the Skyliner, but it’s no monorail. Nor is it the same as walking to the park. Or being at one of the ‘classic’ and highly-themed resorts.

In fairness to the Riviera, despite not having a theme, it does appear to be luxurious. Moreover, it has a robust slate of sophisticated restaurant and bar options, which should be far superior to any stand-alone offerings at other Disney Vacation Club resorts.

Contrary to early rumors, this is definitely not “Moderate DVC.” It’s very much a Deluxe Resort, just not one that’s to my tastes. I’m still excited to spend a night or two in the Tower Studio, dine at the various restaurants and lounges, and take the Skyliner to Disney’s Hollywood Studios. However, once the new resort smell wears off, I doubt Riviera will join our regular rotation of hotels at Walt Disney World. That’s purely due to our personal tastes, though. Obviously, others feel very differently about the Riviera.

A point chart for 2019 has not been published, but with the resort only being open for around 10 days in 2019, it’s highly likely this year’s calendar will simply mirror 2020 numbers. 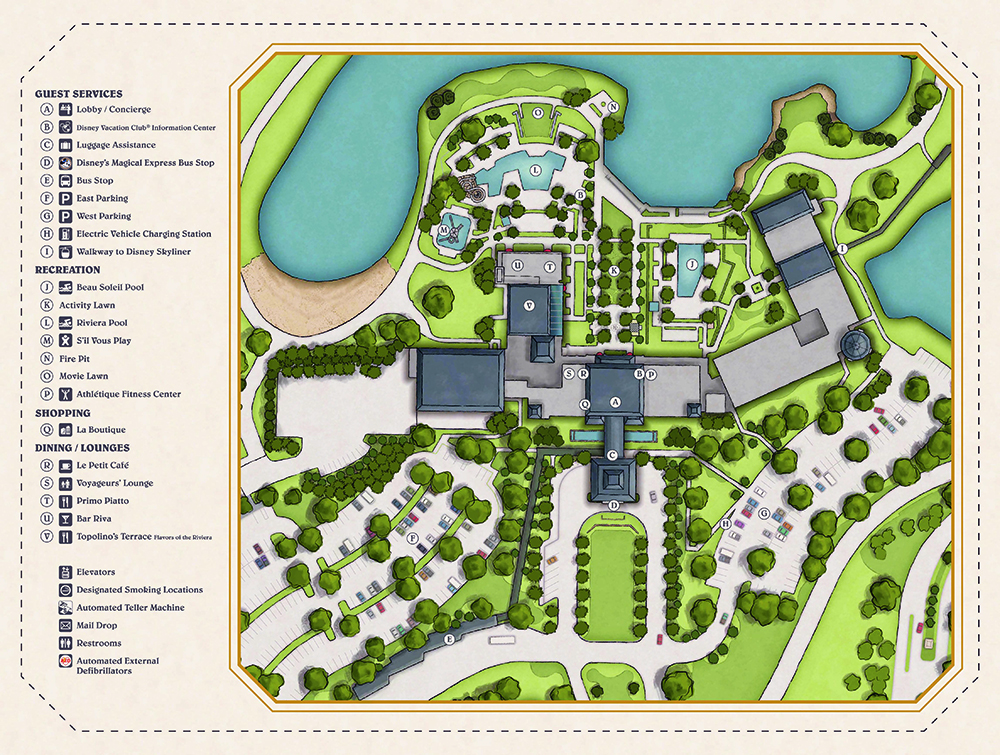 However, the big number that caught my attention is maintenance fees of $8.31 per point. Those maintenance fees are nearly $2 per point higher than Bay Lake Tower or Grand Floridian, which I feel are the Riviera’s closest counterparts given their design and transportation. 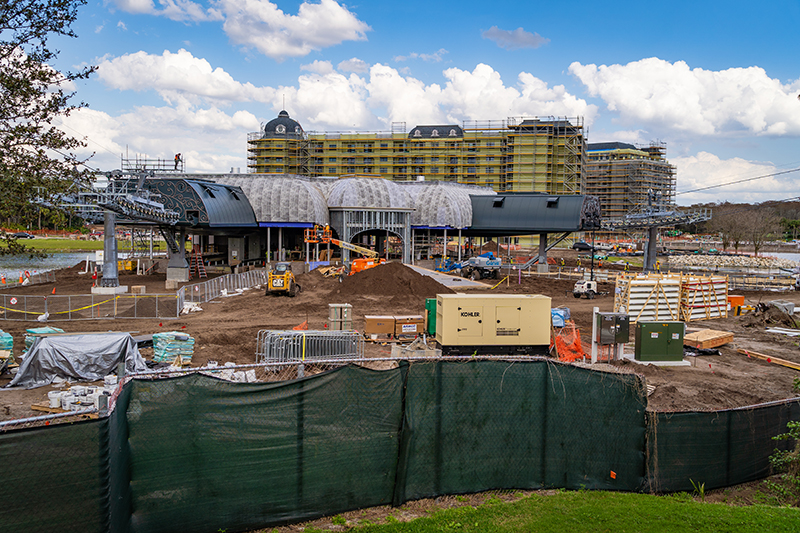 However, Disney’s Riviera Resort is still abnormally high, and the easiest explanation for the rest of the difference is the Skyliner. Just as owners at Grand Floridian or Bay Lake Tower pay for upkeep on the monorail, the same should be expected for Riviera owners and the Skyliner.

What Skyliner expenses are being allocated to DVC owners is unclear, but at first blush, it sure seems like “a lot of them” is the answer. It wouldn’t be a surprise if that means everything associated with the station adjacent to the resort (even though it’ll inevitably be used by Caribbean Beach guests). This is because it behooves Disney to pass along as much of those costs as possible to DVC.

To illustrate, here’s some quick back-of-napkin math. Assuming you own for 50 years and maintenance fees remain flat, that’s $415.50 per point in maintenance fees over the life of the contract. In reality, maintenance fees will increase by about 4-6% per year, pushing that number–which is already over double the upfront cost–much higher. 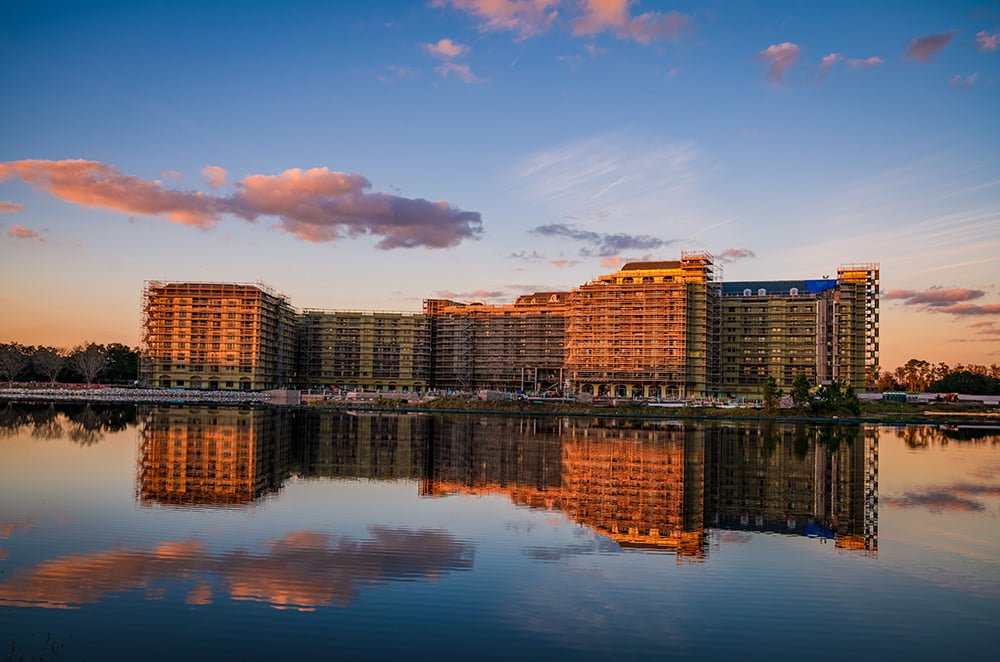 When you consider both maintenance fees and the upfront cost, Disney’s Riviera Resort has the most expensive per point cost over the life of the contract of any Disney Vacation Club resort at Walt Disney World. Given the resale restrictions that are being implemented for the Riviera, it’s also likely to have the biggest drop-off in secondary market value. This isn’t a problem if you plan on “owning forever,” but most people don’t go into ownership with the expectation that they’ll have to sell in a few years. You never know what the future holds.

Overall, I had zero interest in buying at Disney’s Riviera Resort before learning these details…and have zero interest after. Accordingly, I’m probably not the best person to offer an “unbiased” breakdown on this news. I can understand why Riviera is an attractive property for some DVC Members and prospective owners, but it’s simply not for me. I would also encourage those who are excited about it to give the decision serious thought. Disney Vacation Club is entering uncharted territory with Riviera Resort that could seriously handcuff owners if they ever decide (or are forced) to sell.

What do you think of the per point price, incentives, point charts, or maintenace fees at the Riviera? Will you be buying at Disney’s Riviera Resort, or sitting this one out? Do you think the resale restrictions here will have a negative impact on resale values, or is it too early to tell? Any questions about Disney’s Riviera Resort? Hearing from you is half the fun, so please share your thoughts in the comments below!