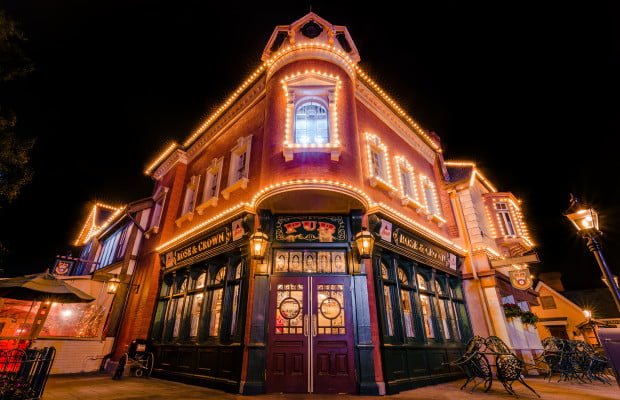 Rose & Crown Pub & Dining Room is a table service restaurant and bar (hence the name) in Epcot’s World Showcase at Walt Disney World with a menu consisting of British pub grub and comfort foods. This review features food photos, and our analysis of the value & quality of this popular restaurant, which accepts the Disney Dining Plan, and the Tables in Wonderland card for a 20% discount. As a relatively inexpensive table service meal, it’s not the best use of table service credits if you’re trying to Maximize Value on the Disney Dining Plan, but there are a few menu options that can make that work.

Many American cultural customs, traditions, and that sort of thing are inherited from our motherland in Europe. One such example is our penchant for pubs. Simple yet hearty food typifies such establishments, and Rose & Crown is no exception. While the pub blends (that you can get without an ADR) are the star of the show at Rose & Crown, there’s a kitchen from which you can order meals of food, too.

Think of Rose & Crown as the poor man’s Le Cellier, which is itself a poor man’s Yachtsman Steakhouse. That comparison isn’t especially apt, but I sensed my window to establish U.S.A. on top of the culinary hierarchy, and felt obliged to take it. The more apt comparison is Raglan Road–one of our favorite restaurants at Disney Springs–and if I were to only recommend one European pub at Walt Disney World, it would be Raglan Road.

This is especially evident when glancing at menu prices, and Rose & Crown deserves an immense amount of credit for its price points. While some options do creep into a more expensive range, there are several entrees on the lunch menu that are under $20, with multiple entrees at or below $16. This makes it only slightly more expensive than most counter service meals, and probably the cheapest way to do a sit-down meal in World Showcase. 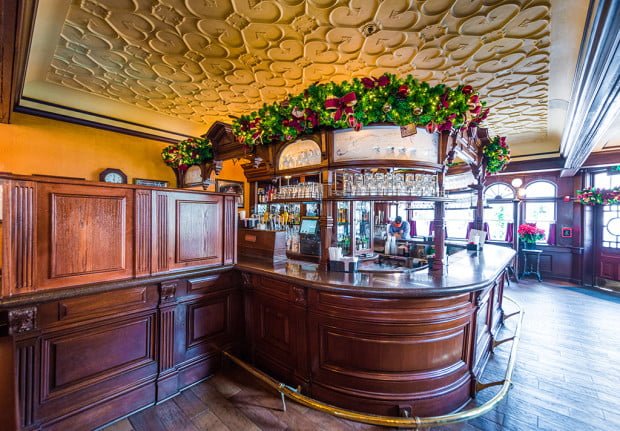 Moving on to the ambiance, Rose & Crown is a typical British pub, although some may be disappointed to find that the Imagineers didn’t recreate the authentic urine scent inside. For my money, Raglan Road also does a better job with the pub ambiance, as it manages to feel slightly raucous without ever actually crossing the line away from family friendly.

Nevertheless, Rose & Crown looks and feels like a lived-in pub, with a molded ceiling, rich woods, and dishes staged on the walls to give the place a cozy feeling. It works well enough, but I’d hazard a guess that many Walt Disney World visitors likewise have a pub in their hometown that works well enough, thematically. 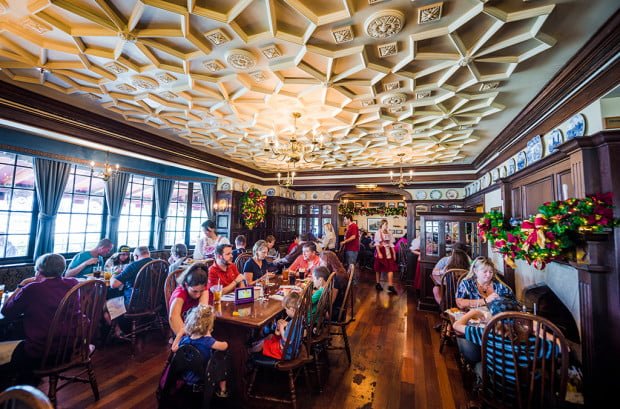 In addition to the dining room, there’s also pub seating in front and a patio out back. The patio gets popular at dinner time as people compete for prime IllumiNations views (which you can request–just make sure you arrive plenty early). During the daylight hours, this patio can be fairly humid much of the year, but the view is nice even when during the day. 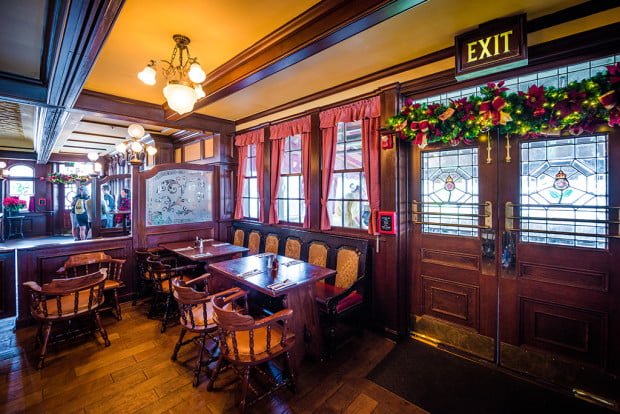 Moving on to the food, we tried the Shredded Corned Beef on Toast, Bangers and Mash, and Cottage Pie for our entrees. We elected to skip the appetizers after noting that most were two-thirds (or more) the cost of our entrees. 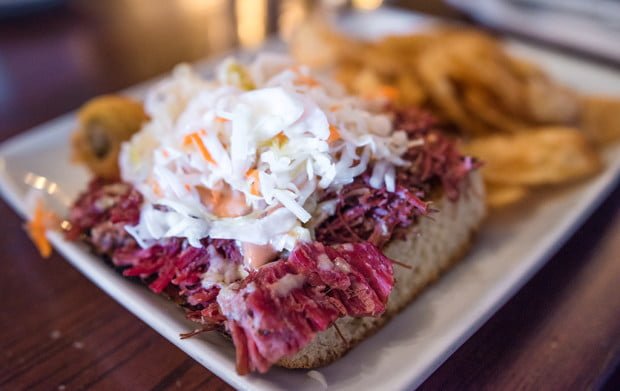 Sarah had the Shredded Corned Beef on Toast, and she thought it was decent. The portion was reasonable, but simple is the name of the game with all of the dishes we had. It tasted like pretty standard corned beef, although the Branston dressing helped give the corned beef a bit more character. 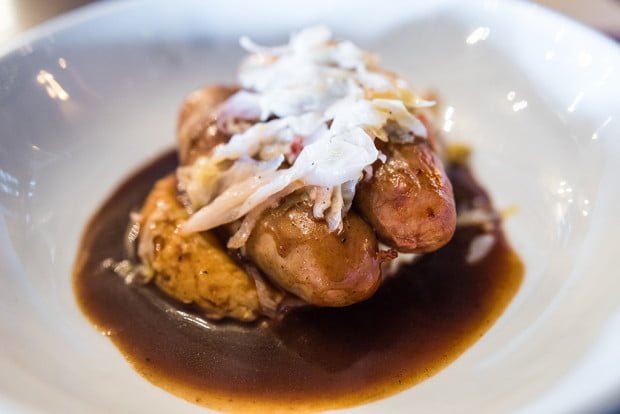 I had the Bangers and Mash, and this dish was once again competently produced, but did nothing to wow me. I felt it was a bit small, but not totally out of line for the price. The creamy mashed potatoes and onion-y gravy were the highlights, and elevated the dish beyond just being “basic” sausage and potatoes. 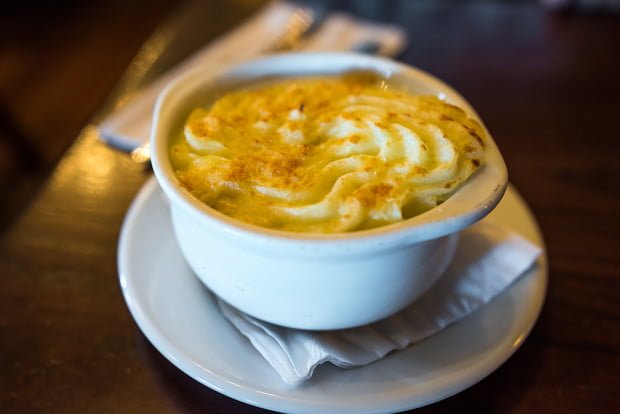 Guy & Jen each got the Shepherd’s Pie, and they both liked it, noting that although the portion size was too small, it was a good ‘comfort food’ dish and the meat to mashed potatoes ratio was favorable. The size was definitely on the small side, especially for a dish that was basically glorified mashed potatoes.

As for desserts, we tried the Banoffee Tart, Sticky Toffee Pudding, and the Warm Apple and Rhubarb Crumble. At <$7 each, these weren’t too expensive, but no one was really wowed by theirs. 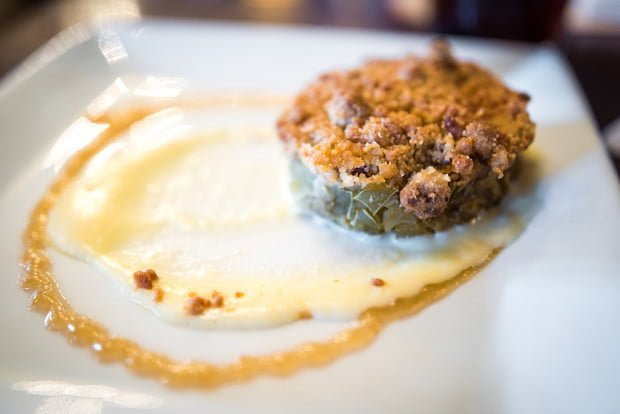 I was reasonably pleased by the Warm Apple and Rhubarb Crumble, with the rhubarb providing a light, tangy contrast to the sweet apples. I wouldn’t get it again if only because there are so many other desserts I enjoy (many of which cost less) around World Showcase, but I wouldn’t recommend avoiding it, either. 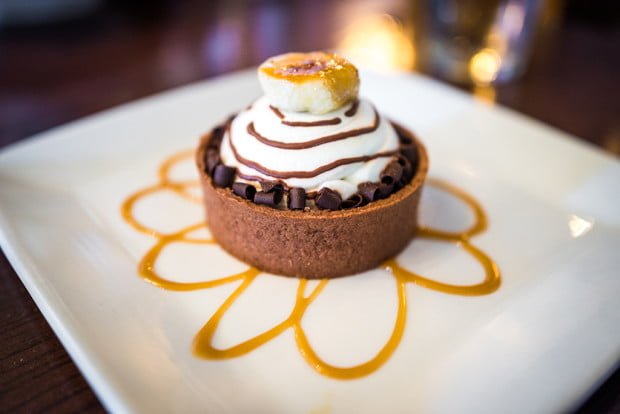 Likewise, the Banoffee Tart was nicely presented and might have been the most complex dish of the entire meal with banana, Jameson Irish Whiskey-caramel, sweet cream, and chocolate. 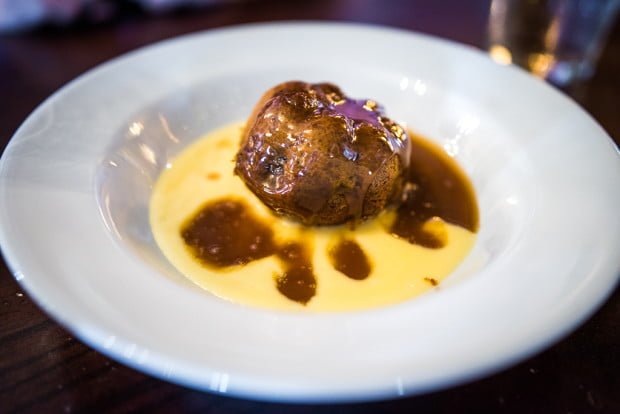 I didn’t have a chance to order the Sticky Toffee Pudding, and I probably never will, as it was shockingly small for the price. This isn’t carefully plated fine dining–it’s British pub food.

Overall, even with all of this said, it’s tough to be too harsh to Rose & Crown. It’s one of the most budget-friendly table service options in Epcot and is probably going to most appeal to those who want to play it safe from a culinary perspective. It also has a loyal following (although we question how much of that is the booze talking), so maybe it’s just us. Even with all of that in mind, it’s tough for us to justify heading to here more than once every few years as the menu is fairly unambitious and we’d rather spend a bit more on one of the spots in World Showcase we truly enjoy (or save and eat somewhere like Tangierine Cafe). If you find yourself compelled to give it a try, we’d recommend hedging your bets by skipping appetizers and desserts, and ordering one of the <$16 entrees on the lunch menu.

We are always grateful when you share our posts via social media with your friends to help spread the word about DisneyTouristBlog. Thanks!

Have you eaten at Rose & Crown? Did you enjoy the experience? What did you order? Share your thoughts and questions in the comments!