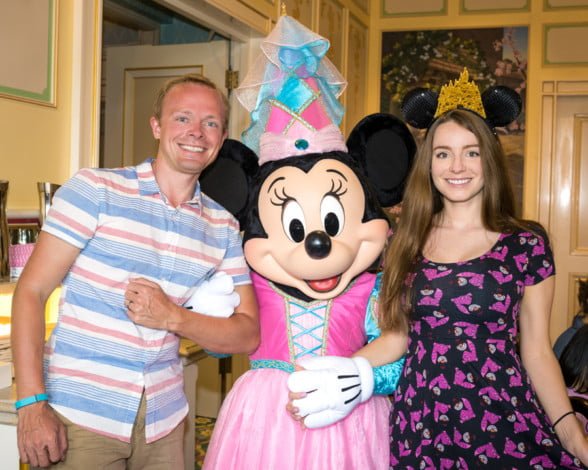 Royal Banquet Hall is a character meal at Shanghai Disneyland, located inside Enchanted Storybook Castle. This is the only table service restaurant in the park (as such, it’s also the only character meal), and it serves breakfast, lunch, and dinner. This review will assess the quality of the ambiance, cuisine, and character components of our meal here (lunch) to determine whether this is a restaurant worth booking during your visit to Shanghai Disneyland.

For some of you, ‘in the castle’ and ‘only character meal in the park’ might be all you need to hear to push you towards Royal Banquet Hall. I totally get that, and if those are the biggest selling points, it’s also worth nothing that during your meal, you will meet Mickey Mouse, Minnie Mouse, Donald Duck, and Daisy Duck, all dressed in their regal attire.

This fine collection of ‘royal wear’ is some of the nicest costuming I’ve ever seen for the characters, particularly at a meal. If character photos are important to you, it’s tough to find a meal (anywhere) better than this one at Shanghai Disneyland. Irrespective of what follows, that might be enough to sell you on Royal Banquet Hall.

Before we get to the substance of the review, let’s talk logistics. Since Royal Banquet Hall is the only table service restaurant in Shanghai Disneyland, it’s a popular reservation (or, at least was when we were there). Those staying at one of the Disney Hotels can make advance reservations, which is what we recommend.

Depending upon availability, walk-ups and in-park reservations may also be possible, but you might also be denied. When we dined here, the line just for those who already had reservations was pretty long. 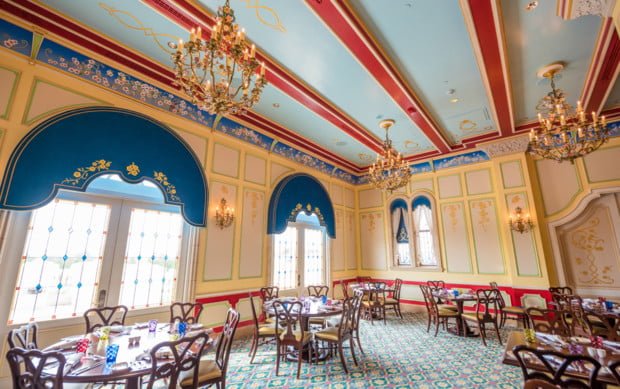 Once you’re through the line, you pass the reception desk and are seated in a waiting room that doubles as a line to meet a princess (Aurora from Sleeping Beauty during our visit).

This line was quite long, so we asked if we could bypass the photo op, which we were able to do. Following that, we were taken upstairs and seated. 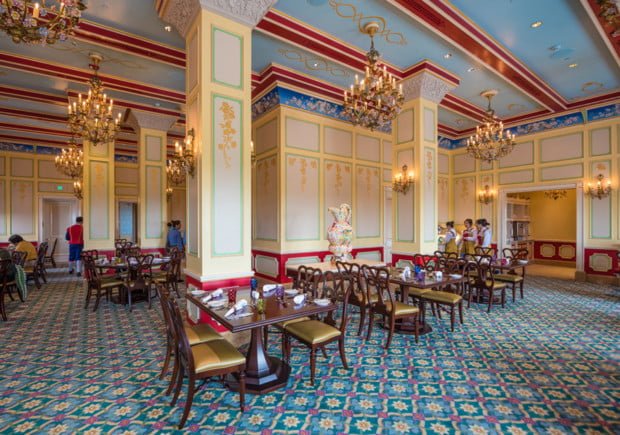 In terms of ambiance, Royal Banquet Hall is a bit of a mixed bag. The interior is supposed to look very lavish and regal, with all of the trimmings and style of such an environment.

This fell flat for me, instead reminding me of an opulent McMansion that ultimately feels hollow and trying too hard to be fancy. 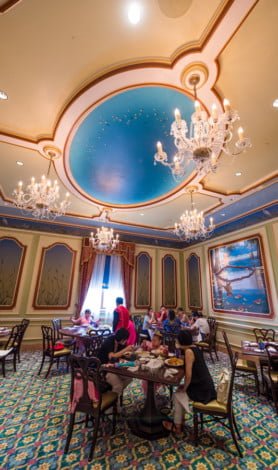 It didn’t help that the spaces were so large and cavernous, and all of the details looked fairly superficial and cartoonish. There is a surplus of patterns and trim-work, but there was little sense of quality or depth to Royal Banquet Hall. It just didn’t do much for me. 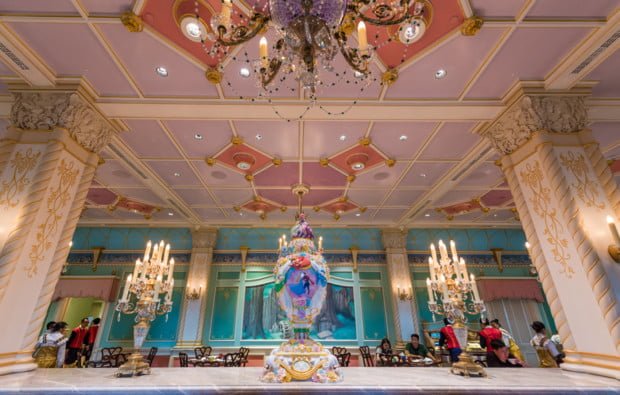 Perhaps I’m missing something, and since this is inhabited by Disney characters maybe there was a desire to cartoonify it, to give it an almost Toontown-esque undertone? I doubt that, though. Both Cinderella’s Royal Table and Akershus (both at Walt Disney World) are inhabited by Disney princesses, and they lack this feel. Instead, both of those restaurants are exquisite.

Those restaurants have depth, texture, and a tremendous amount of lived-in detail. They actually feel like being inside authentic castles. 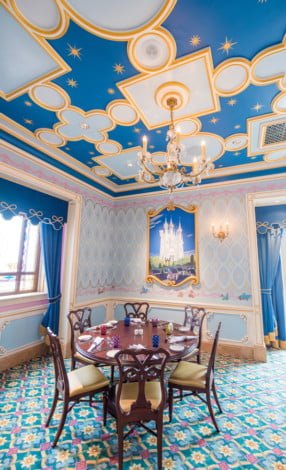 By contrast, Royal Banquet Hall feels like being inside a modernized caricature of a mansion–but with decor that reminds you it belongs to royalty and is, therefore, a castle.

There’s a lot going, as if to scream “THIS IS FANCY” but it wasn’t convincing. 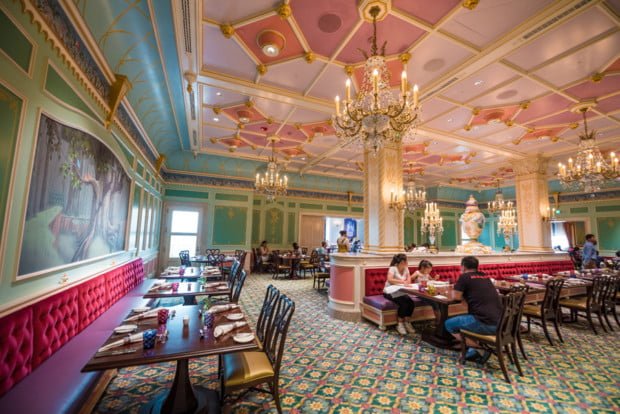 This isn’t to say the design is all bad; there are some cool little touches around the restaurant that I enjoyed. I just wouldn’t recommend dining here because you want a cool themed environment. Many of the counter service restaurants at Shanghai Disneyland have better-executed theme. 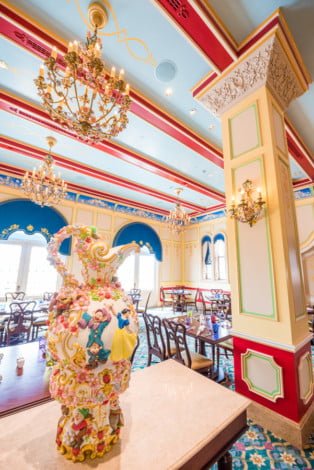 In terms of cuisine, this is the same type of prix fixe meal that should be familiar to anyone who has dined at Cinderella’s Royal Table. 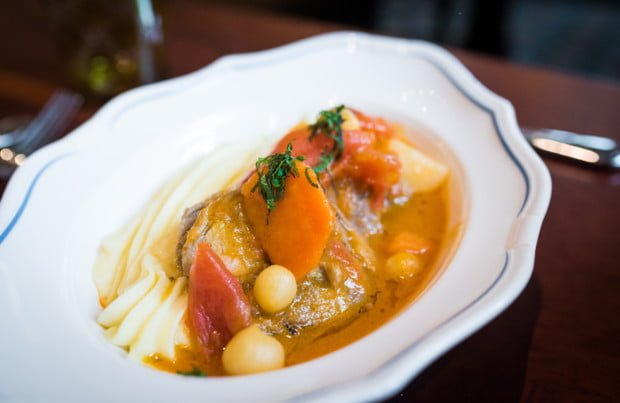 In fact, I would be shocked if that wasn’t the template for this experience. There were parallels between the two meals, most notably that Royal Banquet Hall also aspired to be rise above “typical” Disney character dining and aim for something a rung below fine dining. 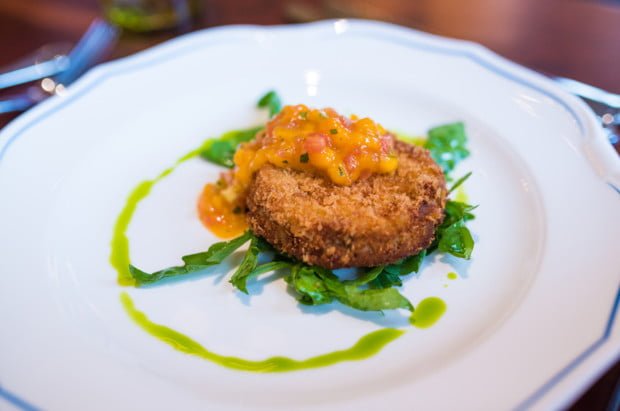 We tried the crab cake, cheese & leek tart, duck, slow-cooked short rib, and a couple of different desserts, and nothing was all that memorable. 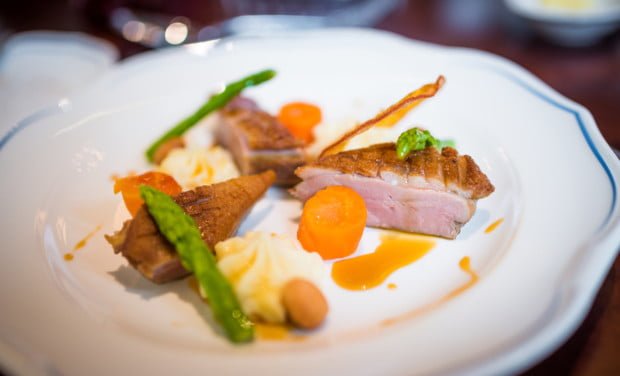 Most items were capably prepared and beautifully-plated, but left no lasting impression. 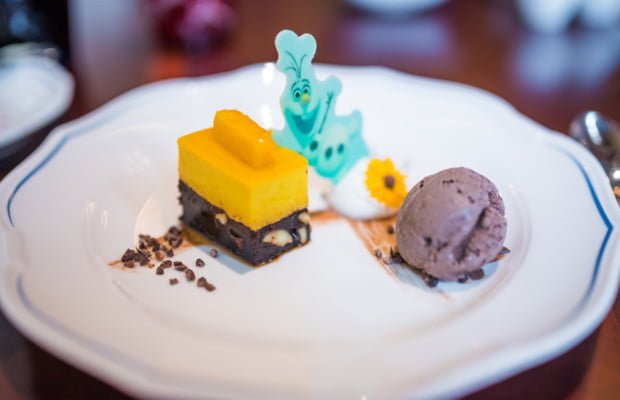 But really, if Olaf makes an appearance on your plate, who cares who the food tastes?! 😉 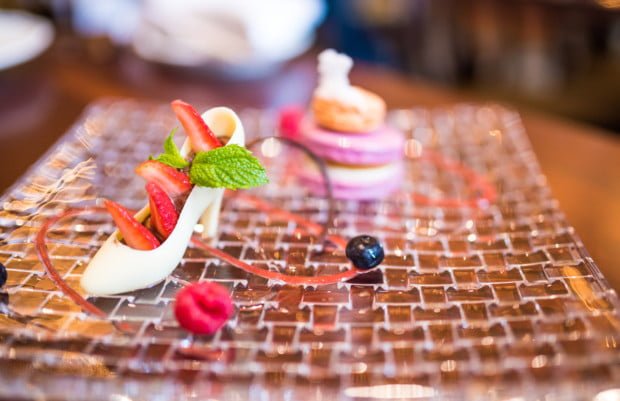 The Cinderella “Glass Slipper” dessert was pretty good, and it’s photogenicity is off the charts. 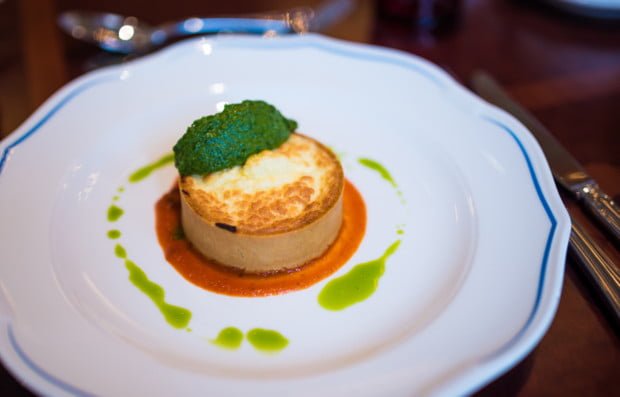 It’s all a valiant effort, and I have to give them points for trying something more than a standard buffet or phoned-in menu items, but it ultimately falls short. 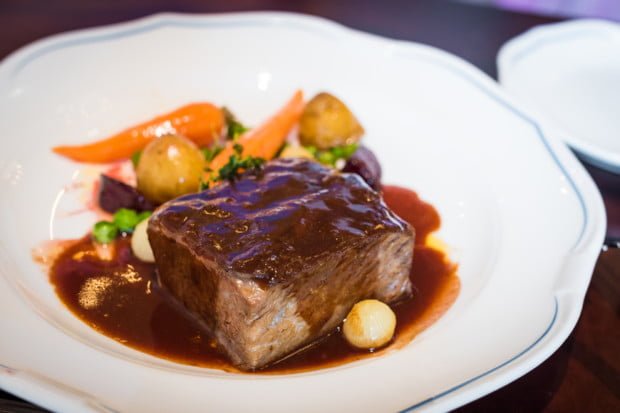 Nothing we ordered had the nuanced flavor profile or quality that typifies fine dining (or justifies the smaller portions) and while the plating is nice, it’s not enough when the food is only good. 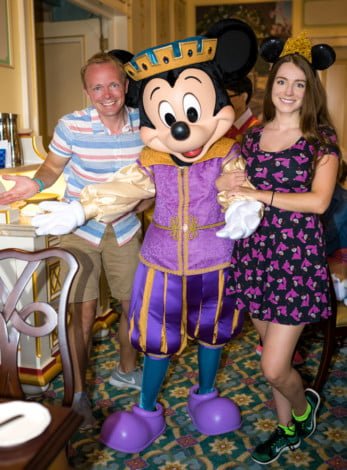 This is especially true when you’re paying over $60 per person for a meal (appetizer, entree, dessert, and beverage) that is “fancy” in appearance alone. To be quite frank, I found a couple of our counter service meals at Shanghai Disneyland to be better in quality, and all of them to be significantly better in value. 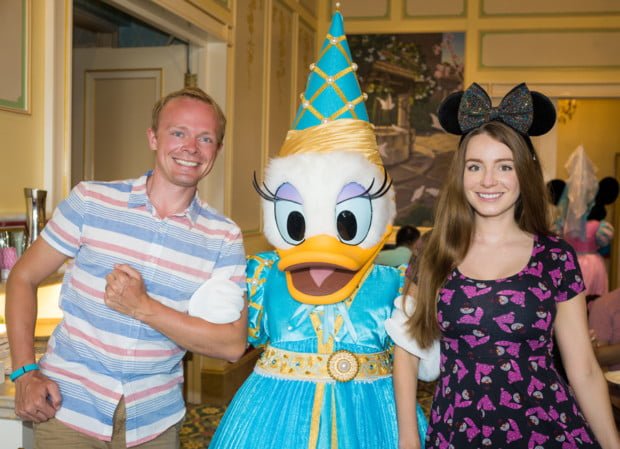 With that said, we talked to several other parties who were there for Shanghai Disneyland’s opening day, and they almost all universally praised the meal. So, perhaps we are curmudgeonly anomalies. 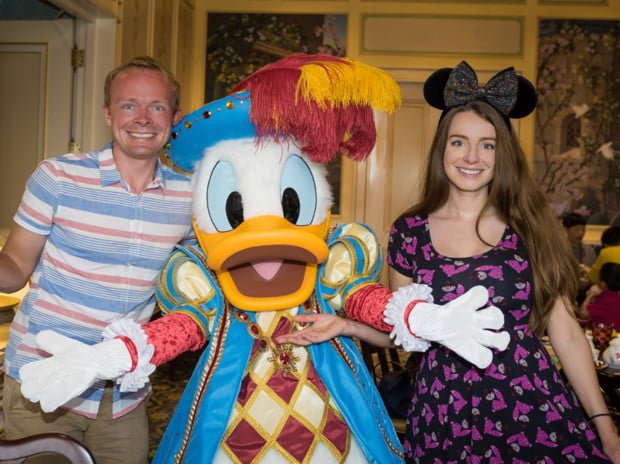 Certainly, there is a price to be paid for the characters coming to your table in unique attire, and as you can see, these costumes are really cool. 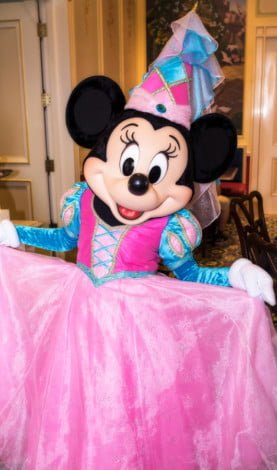 However, this character experience alone does not justify spending $60 per person (at least, not for me). If we value the meal at $20/person (an amount I find to be appropriate given pricing and quality of upper-echelon Shanghai Disneyland counter service restaurants), the character component still costs $40. Perhaps you’re able to justify that, or you ascribe an additional value to dining inside Enchanted Storybook Castle, but I cannot. While I recommend (and defend) Cinderella’s Royal Table as a “worth it” experience despite the high price tag, Royal Banquet Hall simply does not measure up to that.