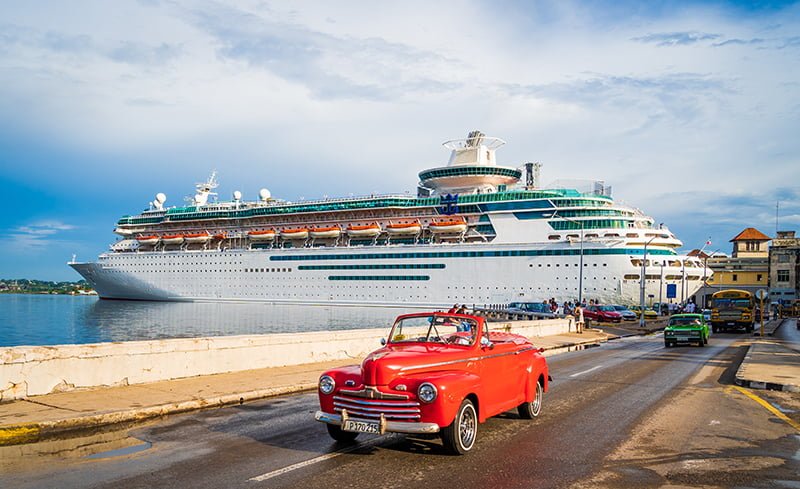 We recently had the chance to cruise Royal Caribbean for the first time, and thought the experience was interesting. Especially as fans who have previously espoused an unwavering allegiance to Disney Cruise Line.

Our reason for choosing Royal Caribbean was simple: we wanted to visit Cuba. Disney Cruise Line does not sail to Cuba. Hence, DCL would not be how we traveled to Cuba. This is something that has been on our travel bucket list for several years, and after restrictions on Americans visiting Cuba were eased a couple years ago, we saw the perfect window. When that easing was subsequently rolled back, we knew we better move more quickly.

There was a bit more to our thought process than that, but this is a blog post about Royal Caribbean, not visiting Cuba (stay tuned for those posts on TravelCaffeine.com as soon as I get through all of our Cuba photos). Suffice to say, we’ve been monitoring cruise prices to Cuba for over a year, and when a stellar last minute deal presented itself that worked with existing travel plans to Florida, we decided to jump on the opportunity.

In terms of the basics: dining, entertainment, and daily activities, Royal Caribbean was a pleasant surprise. I wouldn’t put any of these things on par with Disney Cruise Line, but the rate we paid for this cruise was also far less than we’ve ever paid to sail with Disney, so it’s not exactly an apples to apples comparison.

In particular, the food was a bright spot, especially after hearing some negatives about it from friends. We have absolutely no complaints about dining aboard Royal Caribbean. (Although access to all-you-can-eat food when trying to eat healthy is not always the most “fun” experience!) 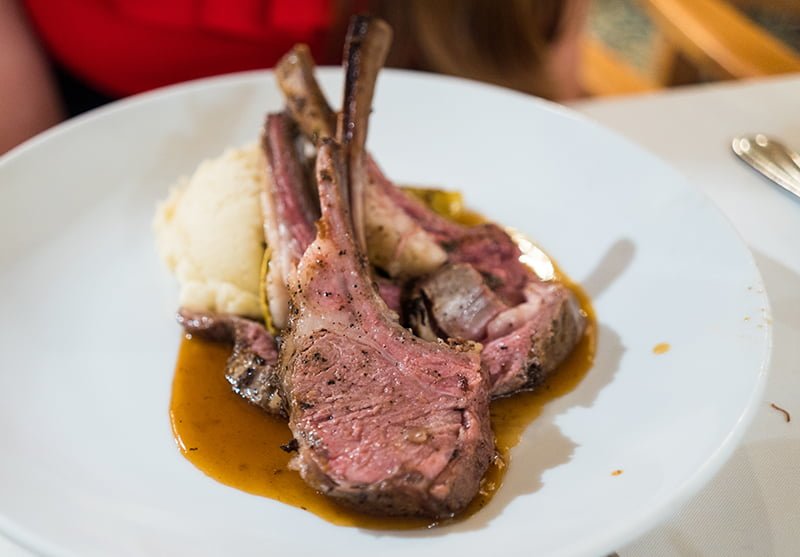 We also didn’t feel nickel and dimed with Royal Caribbean. The cost of soda and upcharge dining options are commonly cited as ways Royal Caribbean does this, but we just skipped all of these. Soda doesn’t work with the whole ‘healthy living’ thing, but if it did, I probably would’ve been okay spending ~$9 for unlimited Coke Freestyle on our day at sea.

Otherwise, I have to say it doesn’t totally bother me to not pay for things I’m not using. I’m not suggesting line-iteming everything, as that would get tedious and annoying, but it can make sense in some scenarios. 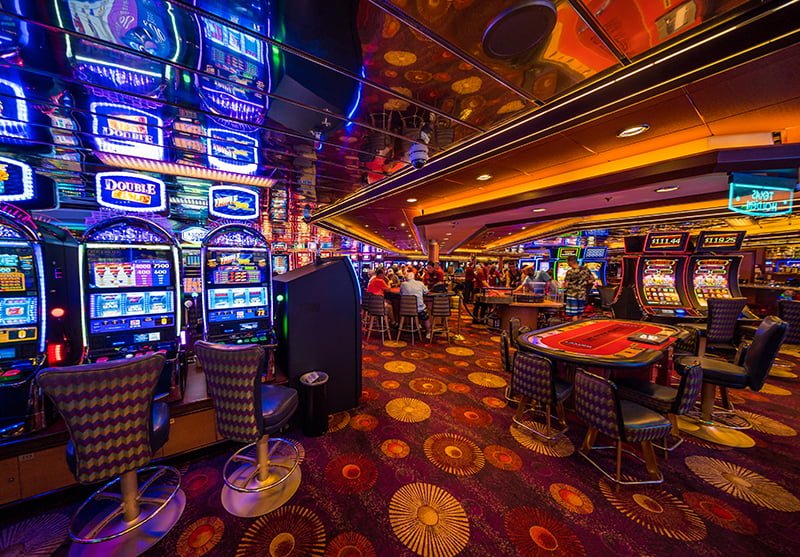 The casino also didn’t bother us. It’s prominently located off the main atrium, and we passed through it several times, but aside from people smoking, it did not have an appreciable ‘impact’ on the nature of the cruise. With the casino, we were bracing ourselves for the worst but it was no issue.

The logical part of my mind views the casino as a nice revenue stream for other cruise lines, and potentially one way of subsidizing costs for everyone else. So…it also can make sense in some scenarios. With that said, I remain glad DCL doesn’t have casinos. These are two very different cruise experiences and I don’t think the vibe of this cruise is something I’d want on a more family-oriented cruise line. 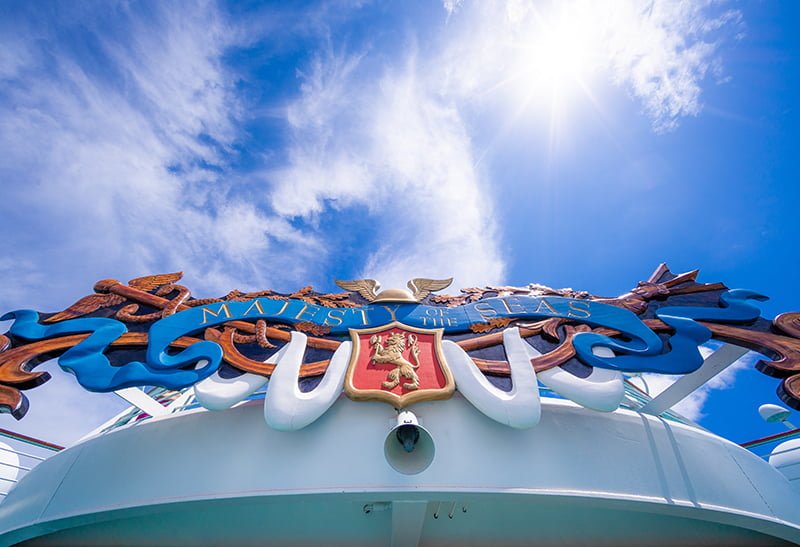 One thing that’s difficult to comment on is the quality of Royal Caribbean’s ships. We’ve heard plenty of positives about the amenities on the newer ships and the array of features they have, but that was not the case with our ship, the Majesty of the Seas.

Going in, we knew that we’d be on one of the oldest ships in Royal Caribbean’s fleet, which was christened in 1992. We booked the cruise it was cheap and because we’d rather do the ‘floating hotel’ thing than deal with an Airbnb or hotel in Cuba. 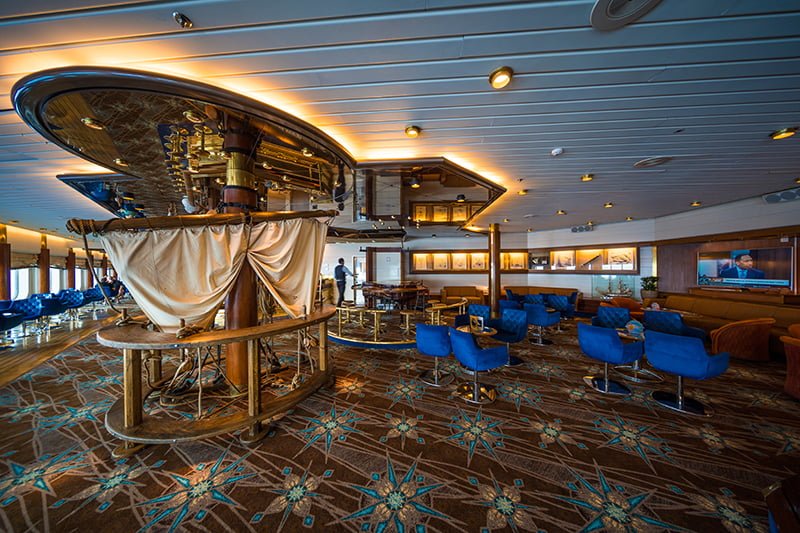 For us, the ship was intended to be nothing more than a means to an end, and we were bracing for the worst based upon what we had heard about Royal Caribbean’s older ships.

Supposedly, this is the largest ship that cruises into Havana, so the options for a cruise to Cuba are limited. 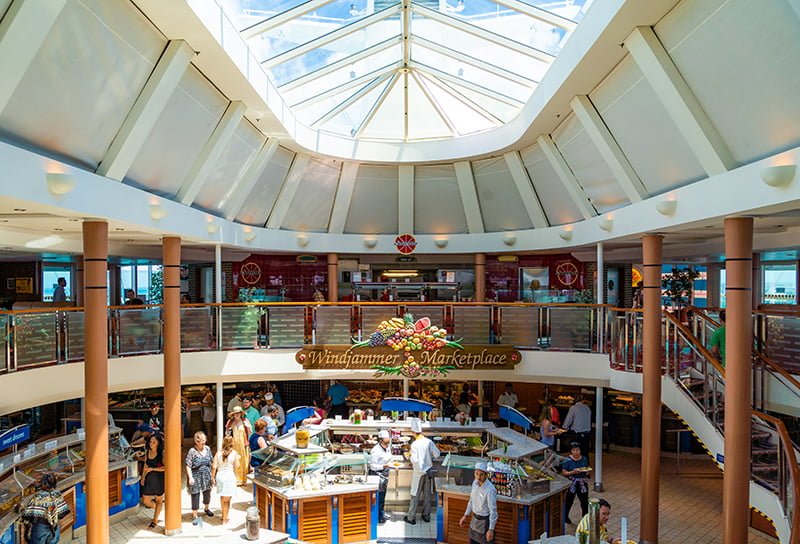 Initially, we were taken aback by the pronounced late 1980s/early 1990s aesthetic of the ship. It was basically an early 1990s mall in cruise ship form.

Once we got past the initial shock of just how little had been updated, we both commented on how well the ship had been maintained. It was as if the ship had been stuck in a time capsule in 1992, and reopened for our cruise with only the public restrooms and casino updated. For something so dated, it was remarkably pristine. 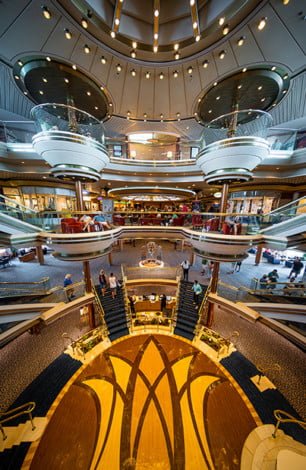 To be entirely honest, by the end of the cruise, the ship’s interesting aesthetics had really grown on me. It reminded me of the malls, hotels, and even EPCOT Center of my childhood.

Perhaps it’s personal nostalgia, but I think there’s a certain warmth and reassurance in some of the now-derided designs of the late 80s and early 90s. 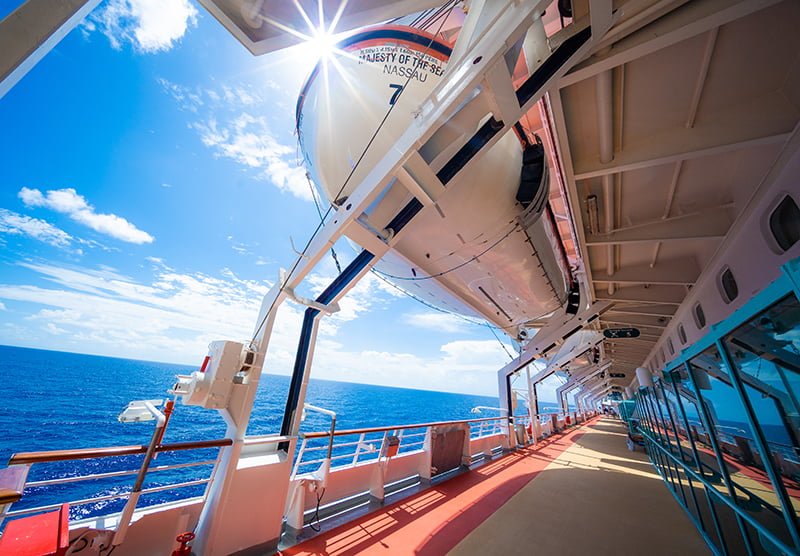 The question is how well Royal Caribbean’s newer ships do in this regard, as the cruise industry has essentially been revolutionized since this ship debuted. 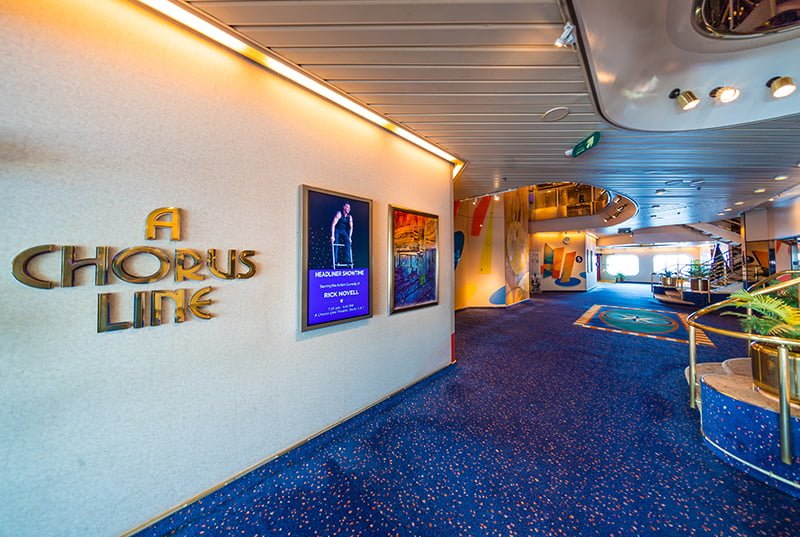 One thing that did slightly bother me about Royal Caribbean was how the ship pushed third party vendors. Several common areas were regularly overrun with handbag, jewelry, and art “sales” and there the daily itinerary was filled with seminars offering shopping “opportunities.”

To be fair, Disney’s hands are hardly clean in this regard, and I’ve been highly critical of Disney promoting Diamonds International. This strikes me as tacky, and it still baffles me that people go on cruises to buy these things. It just seems antiquated…but there must be a market for it, as this type of thing is common on cruises and in port cities around the world. 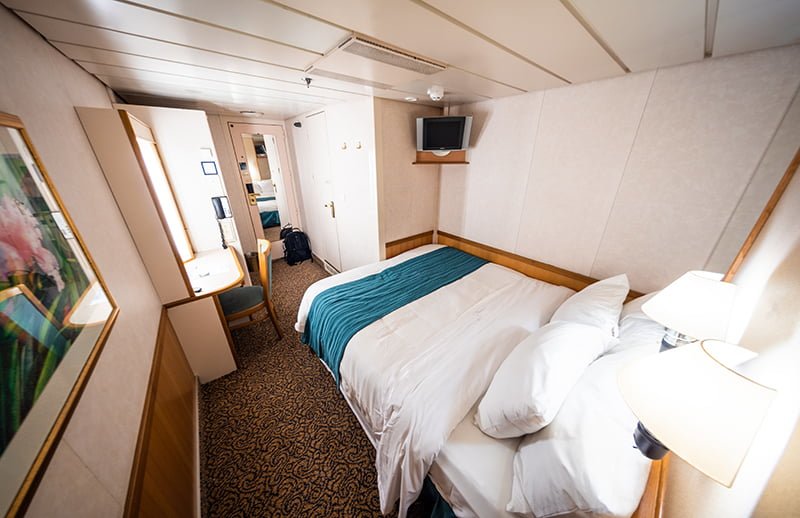 The other main point of apprehension with regard to Royal Caribbean before we sailed was in terms of service. Across all of the Parks & Resorts division, Disney Cruise Line is the gold standard of guest service. We don’t think that Royal Caribbean rises to this high bar, but we also think the service “culture” and goals are different with Royal Caribbean.

Nonetheless, we were very impressed with the service on Royal Caribbean, and it easily exceeded our expectations. There were several crew members in high-profile positions who would’ve been the creme-de-la-creme even on DCL, including the cruise director and culinary director. We’d even go as far as to say that service on Royal Caribbean is generally superior to Walt Disney World or Disneyland, so it’s hardly a slouch in this regard. 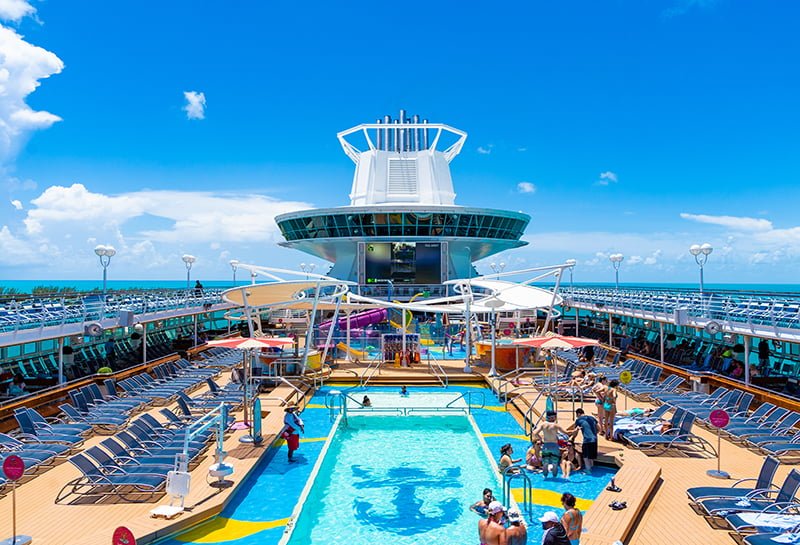 Overall, it was a good first impression of Royal Caribbean, but hardly a conclusive one. It’s not an experience that moves the needle away from Disney Cruise Line as our strong preference, but it was sufficiently positive that we are both open to trying Royal Caribbean again. We have zero regrets about cruising with Royal Caribbean (aside from not choosing the overnight Havana itinerary, but that’s on our schedules, not the cruise line) and if there’s a destination we want to visit to which DCL does not sail, or if there’s another steal of a deal on a future Royal Caribbean itinerary–hopefully next time in one of the newer ships for a fairer comparison.

Have you sailed with Royal Caribbean? What did you think of the experience? How do you think it stacks up to Disney? Do you agree or disagree with our take? Any questions? Hearing feedback about your experiences is both interesting to us and helpful to other readers, so please share your thoughts below in the comments!