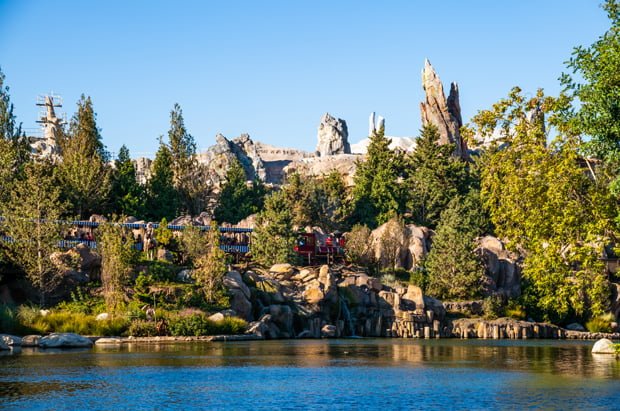 It’s been a while since our last all-around Disneyland update, and a lot has changed as the park preps for everyone in California, plus half the populations of Utah, Nevada, etc., to descend upon the park for Star Wars: Galaxy’s Edge in Summer 2019. In this post, we’ll cover some of that prep work, progress on Star Wars land, and other things that have changed over the past few months.

Star Wars: Galaxy’s Edge is the motivation behind many of the changes happening around Disneyland Resort. From the new parking structure (which is going up at a brisk pace and seems likely to debut in time for next summer) and its pedestrian bridge to efforts to reduce pinch-points and ease crowd flow, much is happening at Disneyland with an eye towards next year.

A lot of this has already happened. Planters and benches have been removed in an effort to create more walking space, and while this makes walkways more conducive to smooth traffic flow, it also strips a tad of personality from Disneyland. I remain baffled at the decision to plunk a Star Wars land at the back of a theme park built in 1955, as even without Galaxy’s Edge, Disneyland has buckled under heavy crowds, but that’s just me.

I guess we’ll see how things go come next summer. I’d hazard a guess that long shuffle to the back of the park will be frustrating, and one-way traffic will make the worst fireworks, parade, or Fantasmic crowd direction seem tame by comparison.

On the plus side, the rock-work is looking great: 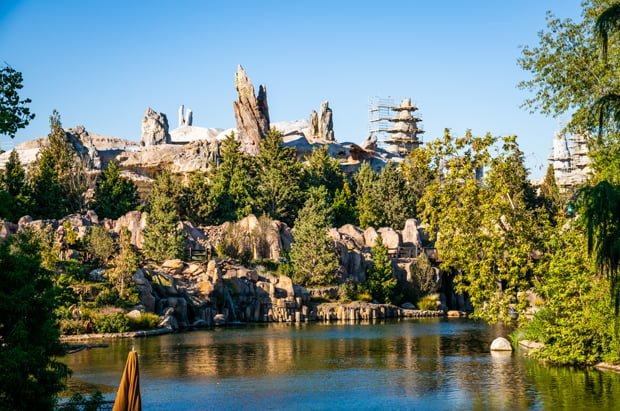 I know not everyone is happening about these rock spires rising above the Rivers of America, but I love it and think it blends perfectly. Foliage obscures the Black Spire Outpost architecture, leaving just the cragged mountains.

Of course, they’re not your ‘traditional’ mountains, but they’re also not overtly Star Wars. They’re no more alien than something you might find in Utah, or even California’s own Yosemite National Park.

I’m still not a fan of Disney opting to plop a Star Wars land into Disneyland rather than having the IP anchor a third gate, but that ship has sailed. What Imagineering has done with the scenery back here to make it ‘work’ together is masterful. 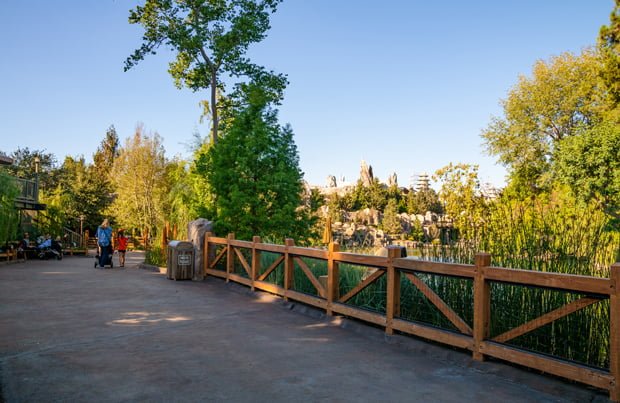 It’ll be nice to have Critter Country no longer be a dead end. If there’s one saving grace of this project in terms of guest flow, that’s it.

Perhaps in the long (long) term, this will ease the congestion in New Orleans Square a bit. Then again, by the time the Star Wars crowds die down in a decade, Disneyland will probably be debuting something new (A Frozen mini-land? Mickey & Minnie’s Runaway Railway?? A Chicken Little E-Ticket?!?) on the expansion pad between Galaxy’s Edge and Toontown, and we’ll see another surge in crowds. 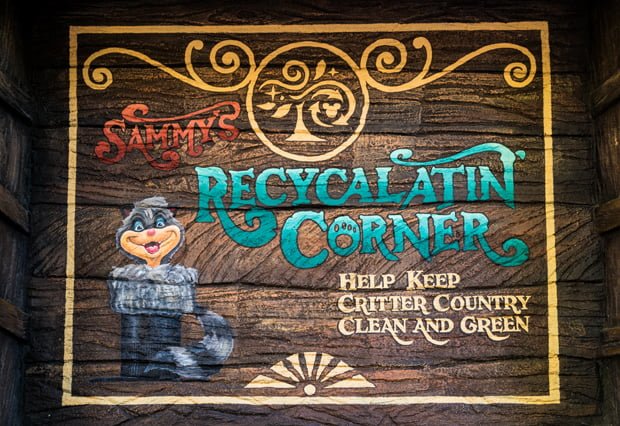 Speaking of Critter Country, this new recycling station featuring Sammy from Country Bear Jamboree is about the greatest thing ever.

Okay, so perhaps the something even better would’ve been not replacing Country Bear Jamboree with a weak Winnie the Pooh attraction, but if we can’t have the Country Bears perform, at least there’s this.

I suppose I should also applaud these conservation efforts on more than just a ‘reference to obscure CBJ character’ level, but it feels like most of what Disney does on this front is motivated by saving money, with reducing the company’s environmental footprint being something of a happy accident. If this were truly a concerted effort towards sustainability, why move several restaurants from reusable plates and silverware to plastics? 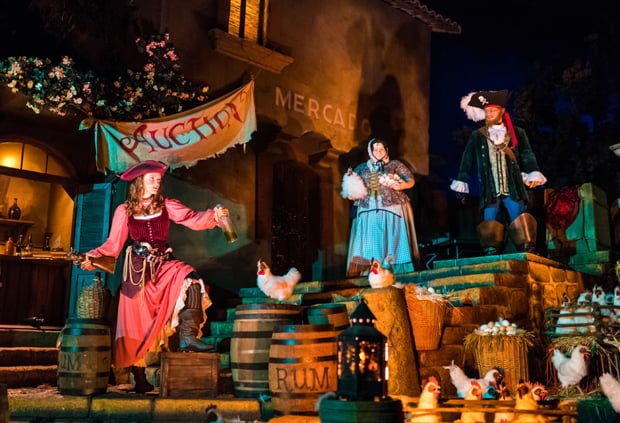 Moving on to New Orleans Square, Pirates of the Caribbean has been open for a while since the controversial changes were completed this summer. I’ve already said everything I have to say about the rationale behind the change, so I’ll just refer back to that post for those curious.

As for the execution of the new scene…eh, it’s a mixed bag. I have nothing against the new dialogue, which I say in response to criticism of the “ten for a hen” and other lines in this scene. In fact, I think a lot of ‘iconic’ Disney parks quotes are cheesy; the difference between memorable and cheesy is often the passage of time.

All things considered, the scene is definitely less noteworthy now. It seems like this end product was chosen simply because it was the path of least resistance, requiring the least alterations while still changing the ‘message’ of the scene.

Unfortunately, it just doesn’t leave an impact (or even make much sense) now. I could get behind changing the auction, but I would’ve preferred to see the scene more fully transformed. 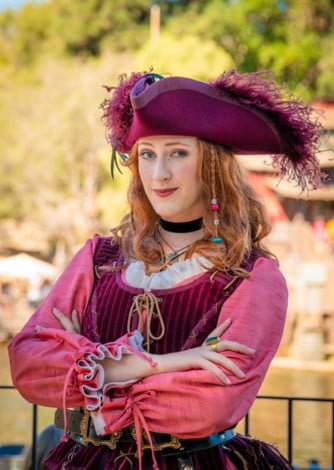 Otherwise, Pirates of the Caribbean is looking and sounding great. It’s good to see aspects of the original attraction restored, and with the movie franchise, and more specifically, its lead star, falling out of favor, hopefully all of the movie-related additions are peeled back in the future.

The photo above is not the most life-like Audio Animatronics figure ever created–that’s the walk-around Redd meet & greet character in New Orleans Square. 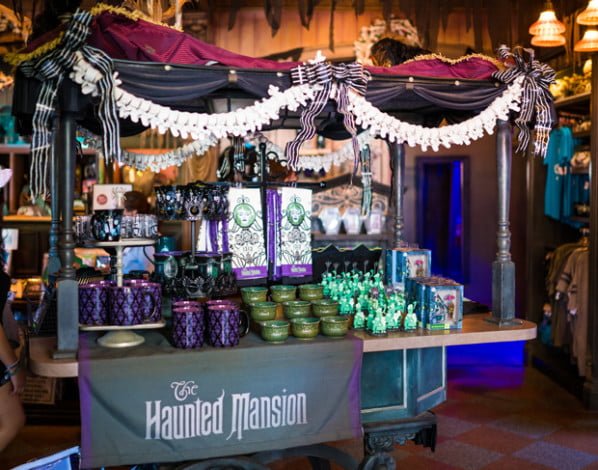 I remember a time when there was a perplexing lack of Haunted Mansion collectibles. In the last several years, Disney has really rectified that, and done a good job with Haunted Mansion items. They are (almost) all tastefully-done, with a range of options. Whoever is in charge of Nightmare Before Christmas merchandise should take notes. 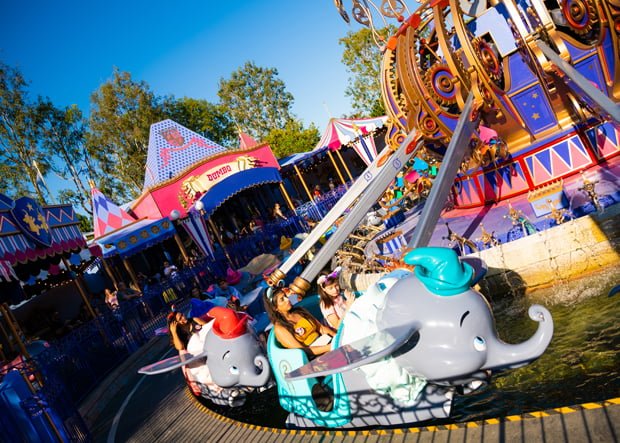 Moving to Fantasyland, the covered queue on Dumbo looks nice. It fits the attraction’s style and provides nice shelter from the sun. 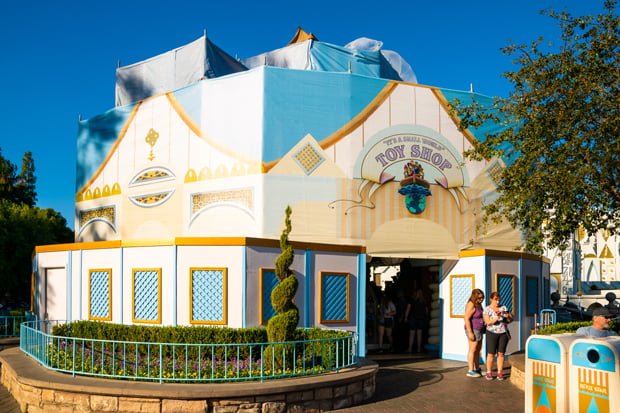 Scrims up around the ‘it’s a small world’ toy shop. 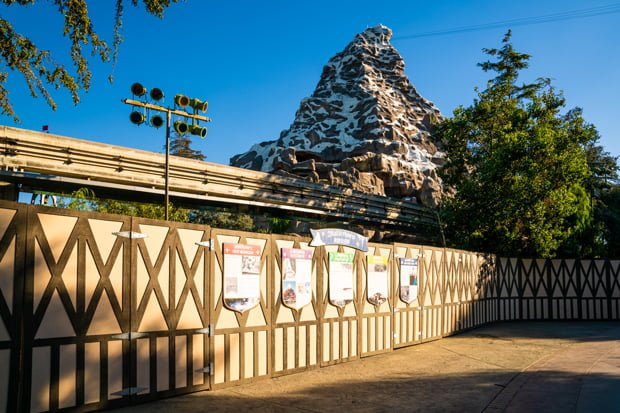 Work continues on the Matterhorn, with only a reopening timeframe of “Fall 2018.” It’s expected that the queue will be redone and expanded, which would be very welcome. 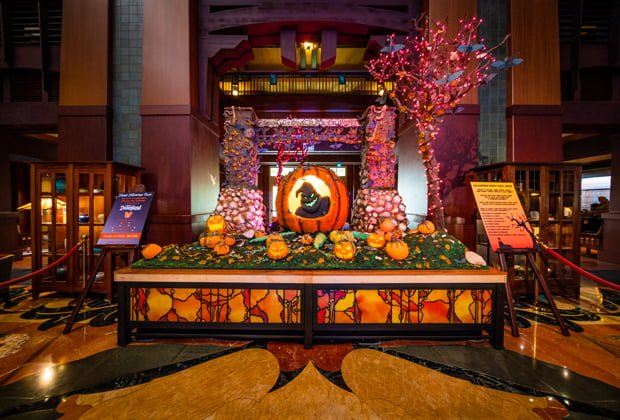 Here’s the Halloween display from Disney’s Grand Californian Hotel & Spa. This is obviously not in Disneyland park, but I always take photos of these and forget to post them since they don’t really fit elsewhere…so here it is.

That wraps it up for this overdue Disneyland update. As you can see, a lot is happening in preparation of Star Wars: Galaxy’s Edge, plus a scattering of changes unrelated to Star Wars. Oh, and we didn’t even cover Halloween, which is currently ongoing…for the time being. Despite this long absence, we’ll be back in just a few weeks with a report on the start of the best time of the year at Disneyland–Christmas!

What do you think of the pre-Star Wars: Galaxy’s Edge changes at Disneyland? Think the park is ready for the crowds? Thoughts on other topics from this Disneyland update? Any questions? Hearing your feedback–even when you disagree with us–is both interesting to us and helpful to other readers, so please share your thoughts below in the comments!