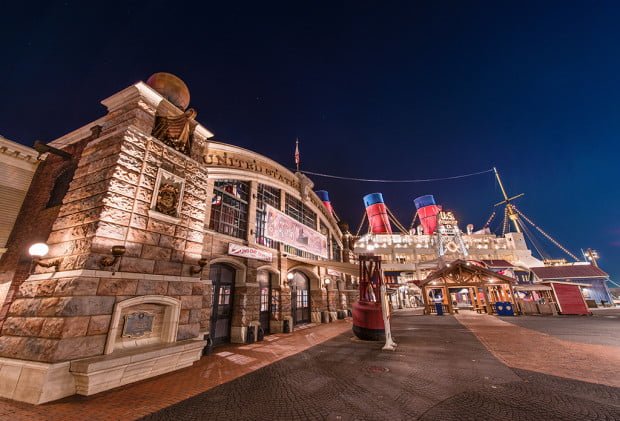 Sailing Day Buffet is a restaurant in Tokyo DisneySea’s American Waterfront. As the name suggests, it’s a buffet, and it serves mostly Western options, but it really isn’t all American cuisine as the location would suggest; there’s a broad enough selection of different international items (all of which are completely tame), conventional options, seafood, carved meat, and more. It even it moderately vegetarian-friendly!

This review takes a look at the food available on the food on the buffet, plus the seasonal ambiance we experienced at Sailing Day Buffet at Halloween. The review costs 2800 Yen, which is currently about $23. I figured I should start giving the actual yen amounts in these reviews, as the Crystal Palace buffet is the same price, yet our review reflects a dollar cost of 30, which was what the conversion rate was at the time. As you can see, things have improved significantly since then. For an all inclusive price of <$25, Sailing Day Buffet represents tremendous value.

Now let’s take a look at the environment. The restaurant is set in a dockside warehouse for the United States Steamship Company, which is based on an actual company formed in 1848 to carry U.S. mail from New York to California, with stops in New Orleans, Havana, and Panama. The company had the SS Ohio and the SS Georgia built in 1848, and purchased the SS Falcon in early 1849; it also carried the passengers by steamship.

It’s unclear whether the building is based on any historical photographs of boathouses used by the actual company. There’s plenty of details and supplies stacked high in the upper level and it feels authentic. Unfortunately, as far as Tokyo DisneySea goes, the concept itself is on the weak side (“a big warehouse filled with supplies where people get to eat–how exciting!!!).

That’s about the only downside of Sailing Day Buffet; let’s take a look at all of the ways it excels, including the skeleton performers! 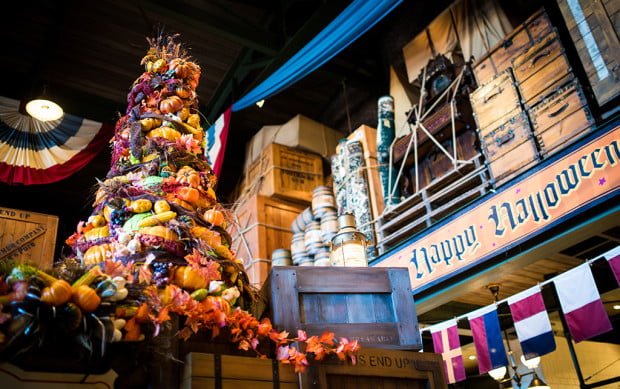 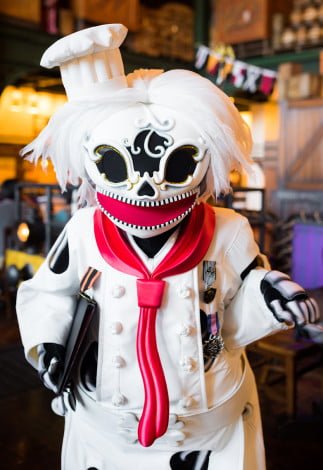 Well, if you’re intrigued by these performers, you might want to make Priority Seating reservations for Sailing Day Buffet, as they invade the restaurant! 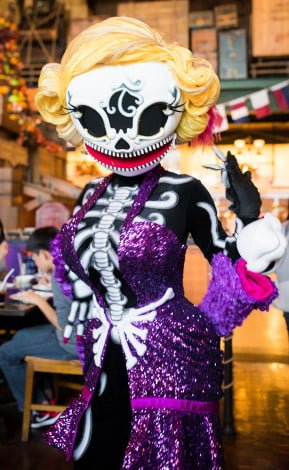 The hilarious hijinks of the Skeleton Friends alone make the restaurant a must-book at Halloween. They serenaded us on the violin, opening mocked us in their squeaky little voices, and were a ton of fun as they goofed around and interacted with guests.

Gelatoni BFF Guy Selga was visibly red after the female above mocked how he excitedly said, “oh my god” time and time again in her squeaky little voice. If you’re visiting during Halloween, think of this like a (way better) character meal. It’s worth it just for the entertainment. 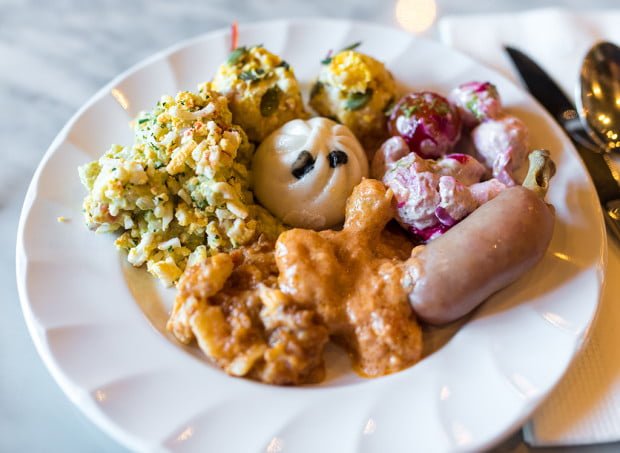 As for the food, it’s pretty spectacular, too. You’ll notice in this first plate one of the most glorious food items from Tokyo DisneySea: meat on a bone. Some Disney fans have raised concerns about this culinary gem, but those concerns are entirely misplaced. Much like a hot dog, no good can come out of seriously contemplating this food. It’s meant to be thoughtlessly devoured like a barbarian, and enjoyed for its wonderful, meatacular taste.

It’s great to see the meat on a bone represented at this American Waterfront restaurant, as it really epitomizes our brave nation. In fact, if I were doing a “remix” of the American flag (long overdue, IMO), it would probably consist of a photo of Chuck Norris eating some meat on a bone. Maybe throw some rad lightning bolts and a howling wolf into the mix too for added wow factor. 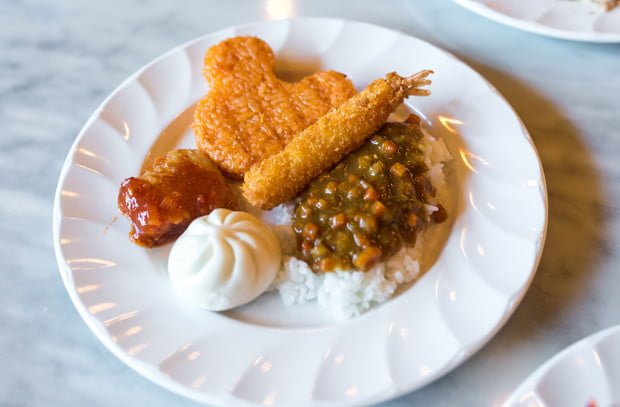 There’s a ton of other stuff on the buffet, from curry to a variety of fruit and vegetable salads, dim sum, fish, and much more.

Me going through a point by point list of what was on the buffet would really be an exercise in futility, as this is a location where the menu changes seasonally, so the pumpkin-heavy menu during our visit won’t be there if you visit for Christmas, Easter, etc. (If you do go for Halloween, make sure to try the pumpkin gnocchi if they have it–amazing.) 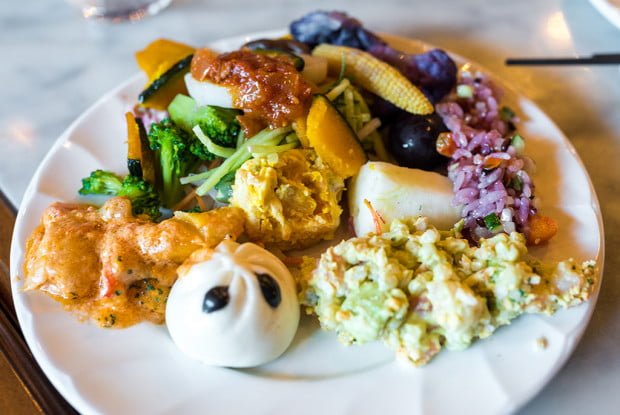 Here’s a plate full of various salads and other assorted stuff. Judging by the distinct lack of meat on this plate, you can bet this wasn’t mine.

Actually, I did try a number of these salads, and all were complex and tasted great. Although I wouldn’t call many of them “healthy”, what was nice was that there were fruits and vegetables on the buffet, and you’d otherwise pay a premium for fruit in the parks. 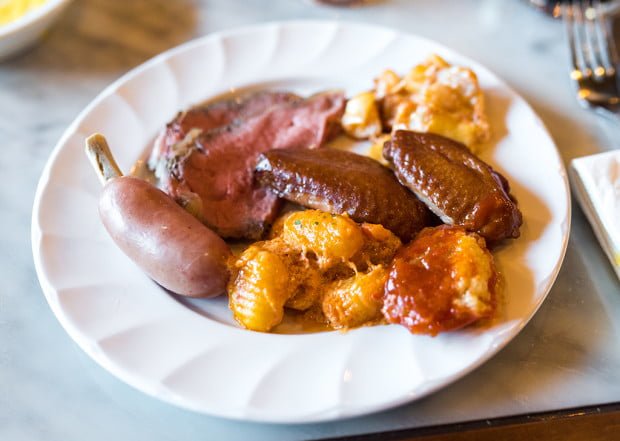 Ah, that’s better, one of my plates. If you’re wondering why it isn’t stacked higher with deliciousness, that was done for you, so the plate photographed better. You’re welcome…I sacrificed much energy that could have been spent eating to walk to and from the buffet extra times.

In addition to the glorious meat on a bone, there’s some prime rib and chicken wings here. The wings were great, but the prime rib was only slightly above average. These few photos from the buffet really don’t do justice to the incredible variety and quality of the buffet. For Walt Disney World veterans, I’d probably compare this to Boma in terms of variety, albeit far less adventurous. One of the biggest fears people considering a trip to Tokyo Disneyland & DisneySea have is of unfamiliar food, but the food in the parks is incredibly tame and Americanized, almost to a fault. The only people who should have concerns are vegetarians. 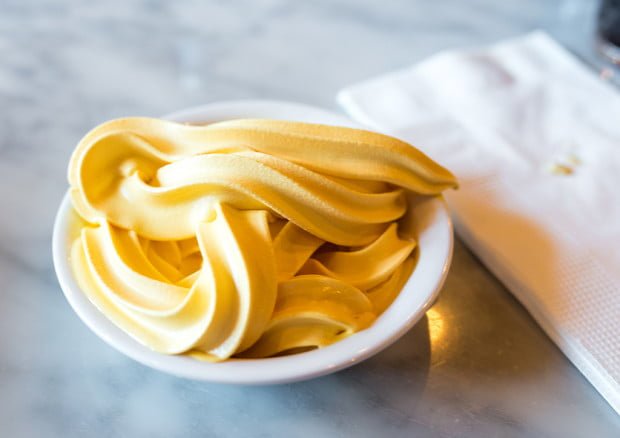 One laudable advancement of science and the culinary arts in the last decade or so is the ability to put pumpkin into literally any dish and have the end result be awesome. Sailing Day Buffet has self service custard, and one of the available flavors during our meal was pumpkin. It was amazing, and we all ate way too much of it. Although in fairness, I think “too much pumpkin custard” is an oxymoron. 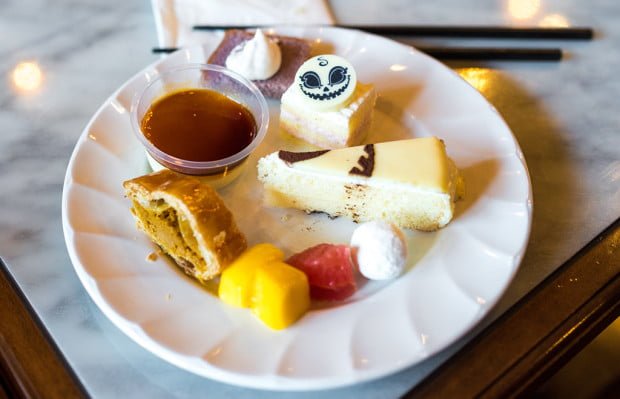 Tokyo Disney Resort doesn’t mess around with desserts. This isn’t amateur hour, and the desserts at Sailing Day Buffet reflect a certain “seriousness” about desserts. 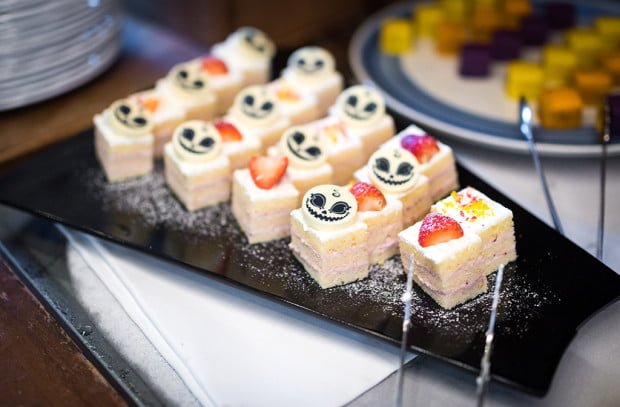 Again, there’s really no point going into great lengths discussing the desserts here, as every single one was seasonal for Halloween. 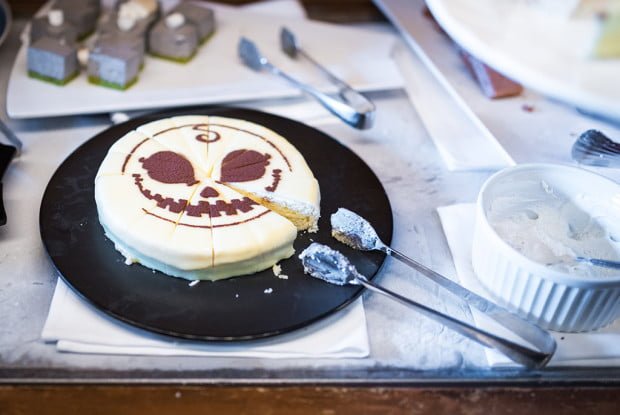 The Skeleton Friends were featured prominently on the desserts. We tried every dessert for…let’s say for the sake of research and/or quality control (Option C: we’re pigs), and they were pretty much all delicious. 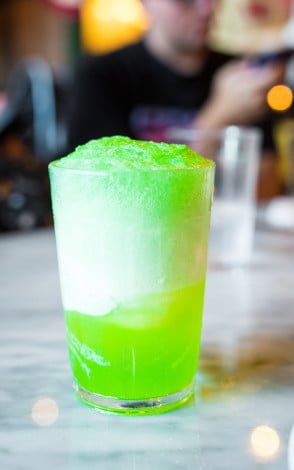 Then, at the end of the meal, when I was so stuffed that I could barely waddle away from the table, I had an epiphany that I’m sure is already being studied by the children in Japanese history classes: I decided to put vanilla custard in a cup and fill it up the rest of the way with melon soda.

Now that Ecto-Coolers have been banished from the market by the FDA for containing too much plasma, I’m going to dub this the official drink of Slimer from Ghostbusters. This is incredibly high praise, because we all know that Slimer is a national international galactic treasure. Suffice to say, my conceit aside, this drink was amazing. Like a root beer float but with a drink that was way more awesome. 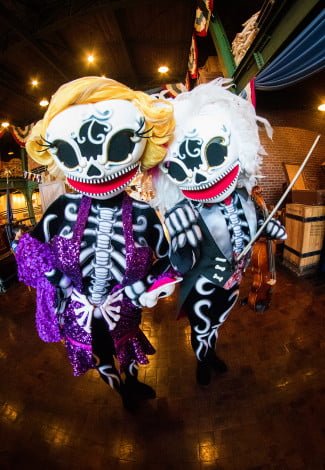 Overall, we are huge fans of Sailing Day Buffet. The theme is a bit of a letdown relative to all of the amazing spots in Tokyo DisneySea, so you’ll have to weigh how much that matters to you if you have limited time in Tokyo DisneySea, but the value for money here is unparalleled, especially if you’ve packed a “typical” American appetite and the portions at other restaurants at Tokyo Disney Resort are leaving you hungry. We mention the buffets in our Tokyo Disney on a Budget article, and despite them costing more than counter service meals, we feel they are the best values in the parks and hotels (there’s one in each park and hotel). You could eat a late lunch here and be good to go for the rest of the day. While I cannot comment on each different seasonal menu here, the quality of the Halloween menu was so good that I’d recommend the other menus blind and highly recommend eating here regardless of the time of year you visit. We will likely be back on our next trip.

August 2017 Update: Since originally publishing this review, we’ve dined at Sailing Day Buffet several more times (probably 4 or 5). We love it. While the cuisine rotates seasonally to a degree, it’s a great place to go if you have a large appetite and want a good value. Highly, highly recommended (despite the theme).

Does Sailing Day Buffet look good to you? Have you dined here? If you’re a regular, any favorite season to go? If you have any other questions, post them below and I’ll try to answer! Hearing feedback about your experiences is both interesting to us and helpful to other readers, so please share your thoughts below in the comments!