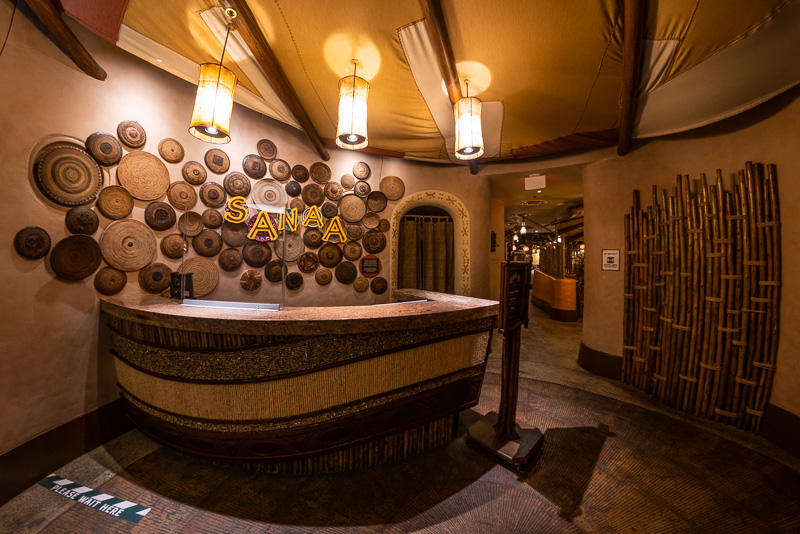 It’s no secret that we’re huge fans of Sanaa. Our most recent review called it Walt Disney World’s Best Food You’re Not Eating. It has regularly cracked our List of Top 10 Table Service Restaurants. So we were pretty excited about the opportunity to try two magnificent and new-to-us WDW dining experiences at Sanaa during our recent stay at Animal Kingdom Lodge.

Before we get ahead of ourselves (since it is a hidden gem that some of you probably haven’t even heard of, much less dined at), Sanaa is a table service restaurant at Disney’s Animal Kingdom Villas – Kidani Village. That’s the Disney Vacation Club expansion to the hotel, which is accessible from the main lodge via a walking path, shuttle bus, or car.

Sanaa is frequently cited as a hidden gem among Walt Disney World fans and other blogs like this one. We are far from the only ones who sing its praises, but the combination of its off-the-beaten-path location and its relatively adventurous menu makes Sanaa a non-starter for many guests. However, in the eternal wisdom of Indiana Jones Adventure (no, not “look not into the eyes of Mara”): “real rewards await those who choose wisely.”

We’re not going to fixate on Sanaa’s theme too much here but it bears mentioning that the atmosphere at Sanaa is exceptional. It’s a beautiful mix of African art, including handcrafted artisan pieces, and stunning views into the Sunset Savanna.

The seating area is also perfect, with a variety of styles and plenty of booths to break up the space. The venue is bursting with detail, including patterns, textures, beams, and even a canopy overhead. 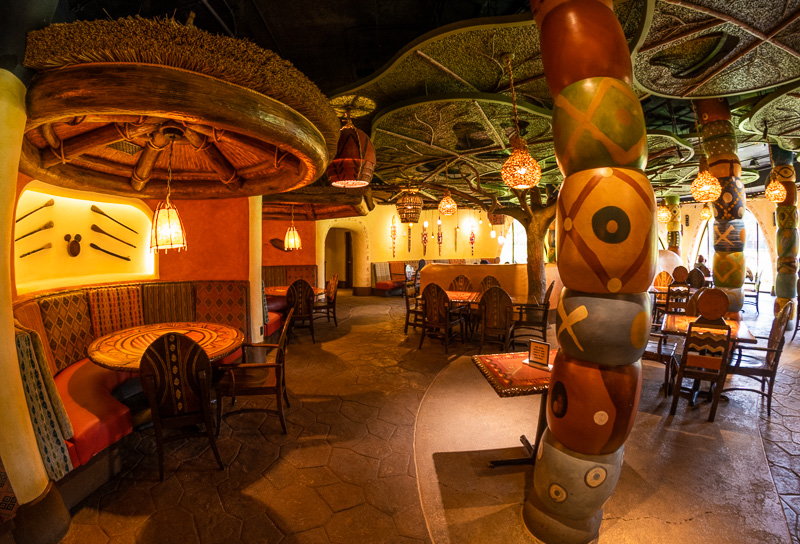 Walt Disney World recently expanded mobile order service options and the ability to check-in for reservations via the My Disney Experience app. There were several changes, with the big one that we really like being able to view current availability, wait times, and join a virtual wait list at participating table-service restaurants.

These are all positive developments that would be welcome enhancements to My Disney Experience even in normal times. They’re especially great for those Walt Disney World guests like us who don’t plan where we want to eat six months in advance. 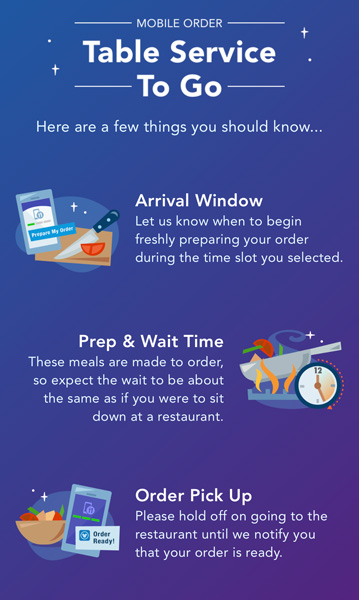 Lost in the shuffle was the expansion of Mobile Order Table Service To Go, which is exactly what it sounds like. This service was quietly rolled out to select table-service restaurants–or restaurant, singular, at the time since it debuted only at Sanaa. It has since been added at Kona Cafe, and will debut soon at the Wave of American Flavors. We’d expect it to roll out at many more resort table service restaurants by 2021.

Visitors to Disney’s Animal Kingdom Villas — Kidani Village can now place a to go order from a selection of items on the table-service menu inside the restaurant and pick up the food. You can then eat at poolside tables outside, in your room, or wherever else (within reason). 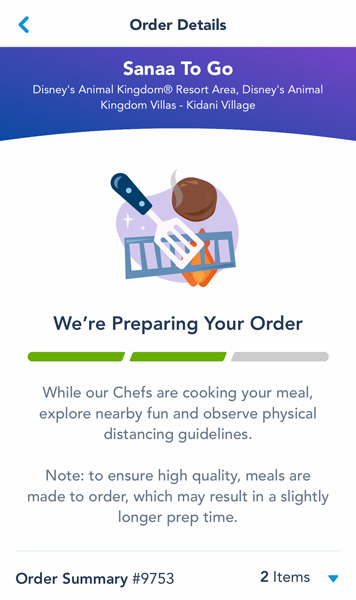 We placed the order from our room, hit the ready/prepare order button, then walked over to Kidani Village.

After only a few minutes of walking around the lobby there and doing some zebra-watching, our order was ready. Total prep time was under 20 minutes. 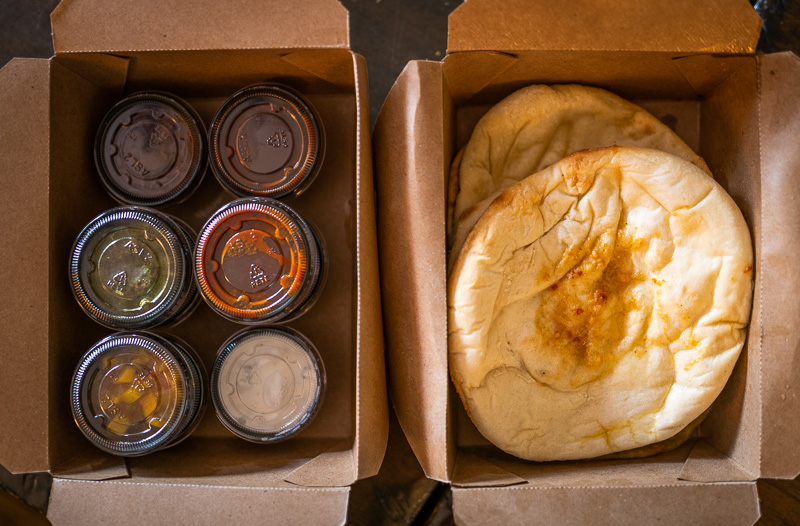 Rather than eating at Kidani Village, we opted to take it back to our room, a value studio at Animal Kingdom Lodge – Jambo House.

I’ve always had the dream of feeding Sanaa’s bread service to a giraffe from our balcony, like a dreamy scene from Citizen Kane. Although given the present circumstances, it’d probably be more like something from The Last of Us. Neither scenario was in the cards this particular day, and not just because I’m too selfish to share with some free-loading giraffe. Rather, because our view was of the parking lot and some dumpsters, not the savanna. 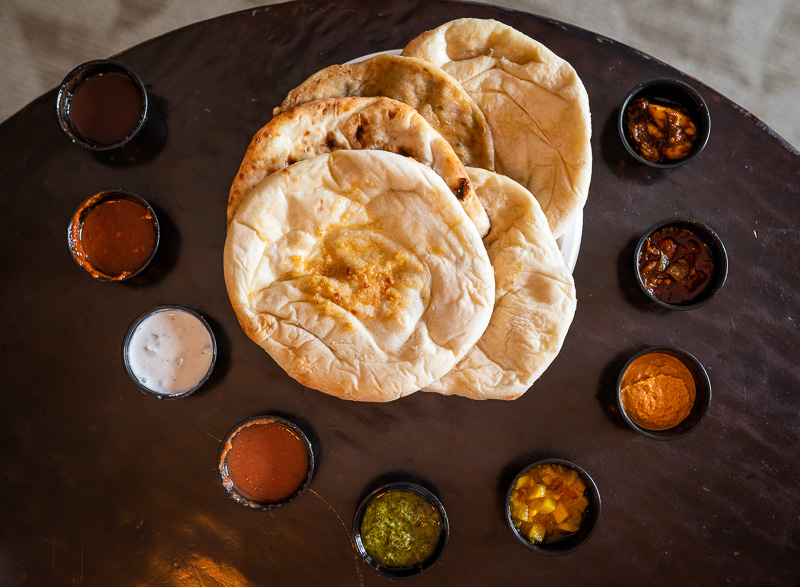 But I digress. I probably don’t need to re-review Sanaa’s spectacular bread service, but just in case, it was spectacular. Probably would’ve been better devoured immediately, but was still excellent ~12 minutes later.

There’s also something to be said for eating it in pajamas while sitting in bed watching Must Do Disney with Stacey. Now I know what those Wall Street bros mean when they yammer on about a “power lunch.” 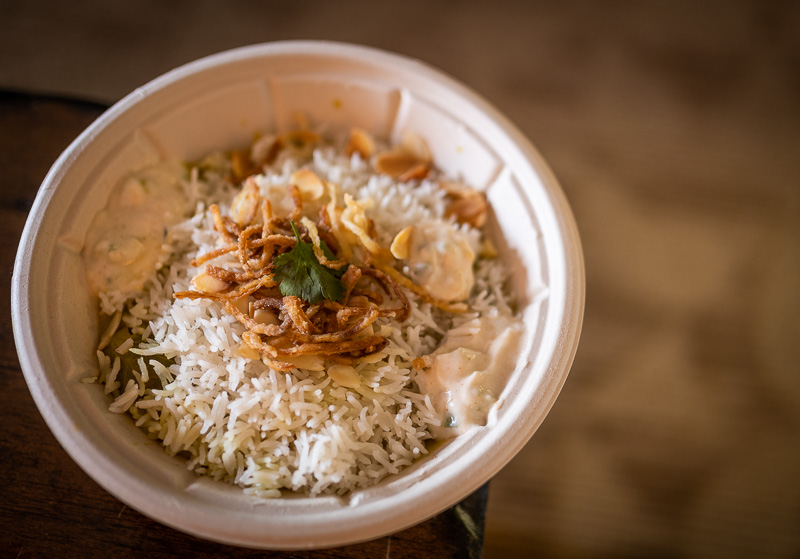 For our other entree, we ordered the African-inspired Biryani: Fragrant Rice with Seasonal Vegetables influenced from the Cape of Good Hope. Also fantastic. A rich dish and succulent dish with a complex flavor.

My vote was for the Grilled New York Strip Steak, but that seemed like too ordinary of a choice at Sanaa–and also a risky proposition for our first attempt at Mobile Order Table Service to Go. Maybe next time! 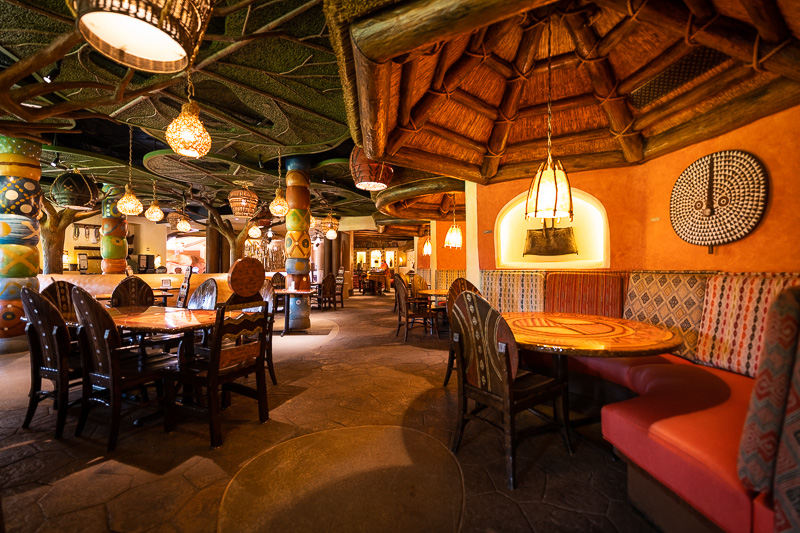 The next morning, we returned to Sanaa for their new to us breakfast.

This debuted a few years ago and, I’ll be honest, I totally forgot about it. When Walt Disney World announced reopening restaurant options at Animal Kingdom Lodge, I thought this was new new. We’ve stayed at Jambo House and Kidani Village several times since this started, but we’ve always opted for Boma or the Mara. 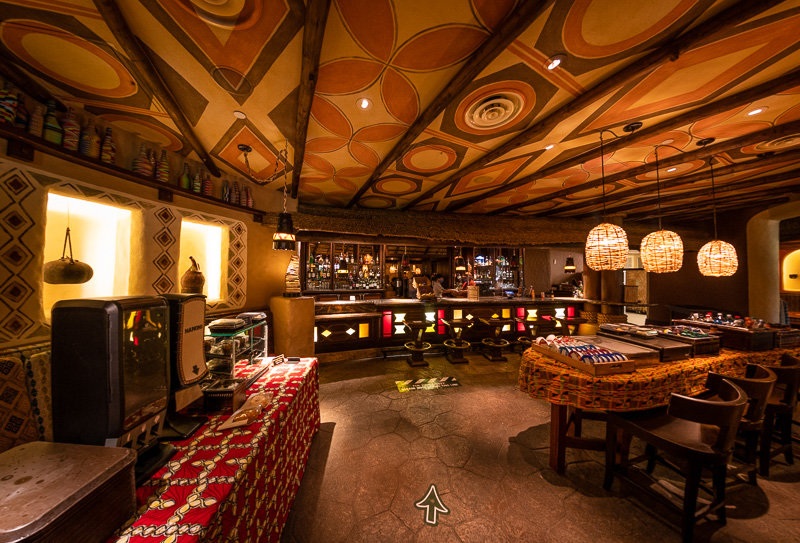 Since breakfast at Sanaa is new-to-us, I’m guessing it’s all new to many of you. As such, I’ll walk through the process.

It starts by heading into what’s normally the bar and lounge at Sanaa, which is set up with a variety of cold grab & go options. You can buy these and be on your way, or order a hot meal at the register. 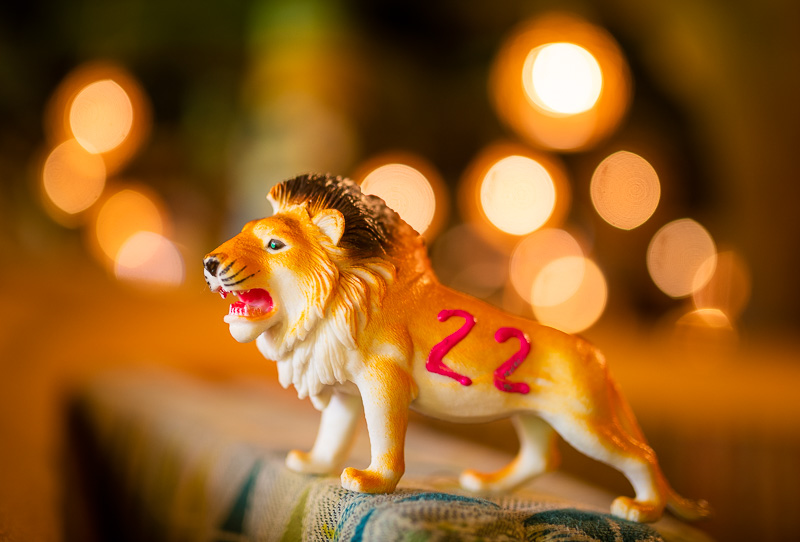 After ordering, you receive a numbered animal, which Cast Members then use to find you in or around the restaurant’s seating area.

At present, all orders are served to-go. It’s like the current Mobile Order set-up, minus being able to do it in-app. Once you receive your order, you can dine in the restaurant’s seating area, take it back to your room, or go wherever (again, within reason–no feeding the giraffes). 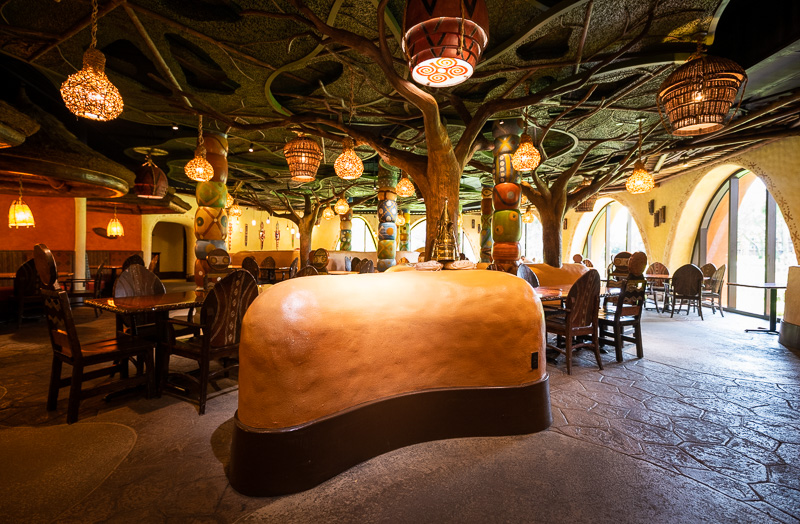 We were literally the only guests in the restaurant at this point and it’s been months since we’ve dined indoors, so we opted for the savanna view over our room’s dumpster/parking lot vista.

Selfishly, we were pleased by the lack of people…but also hope this isn’t the case on a regular basis. It’d be a shame if breakfast at Sanaa were eliminated due to a lack of popularity. (Maybe it was just because we ate so late?) 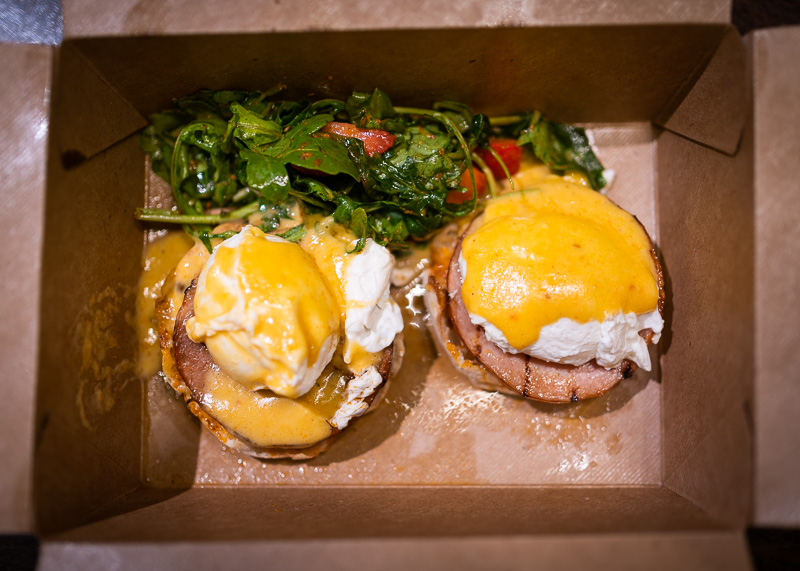 It’d be a shame if breakfast at Sanaa were eliminated because it is fantastic. Seriously, this might be the best counter service breakfast in all of Walt Disney World. (And we say that having just enjoyed the exceptional breakfast at Primo Piatto only a couple weeks ago.)

For our first entree, we picked the Eggs Benedict: Two-poached Brown Eggs, Canadian Bacon, Spice Route Hollandaise, Arugula, and Berries. Pretty unadventurous by Sanaa standards with only a few mild notes of seasoning, but we wanted to see if a “counter service” breakfast could pull off Eggs Benedict.

They can and they did. This dish was competently made, and on par with what you’d get at any table service restaurant around Walt Disney World. That’s not the most effusive praise, but keep in mind that Walt Disney World is treating–and pricing–breakfast at Sanaa as a counter service meal. 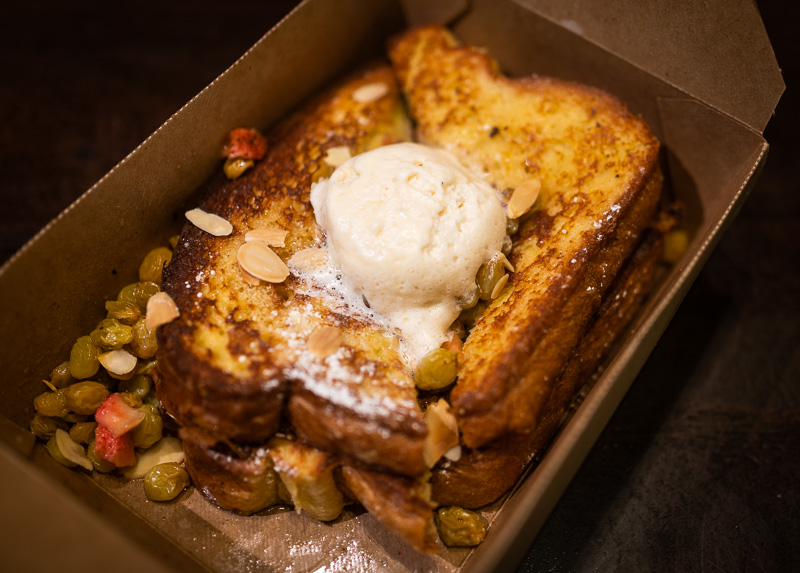 This was the real deal. We’ve previously raved about the Salted Caramel-Apple French Toast at Ale & Compass (home to the current “Best Breakfast at Walt Disney World“) but this might be better than that entree. The saffron and other spices are the perfect twist on the familiar dish, with the heavy chai cream providing blissful decadence.

The Shahi Tukra French Toast is a distinctly “Sanaa” dish, while also being a sugary and approachable breakfast treat. This earns our highest recommendation–I can only imagine how perfect it’d be on a crisp fall morning while sitting on a balcony and watching giraffes. 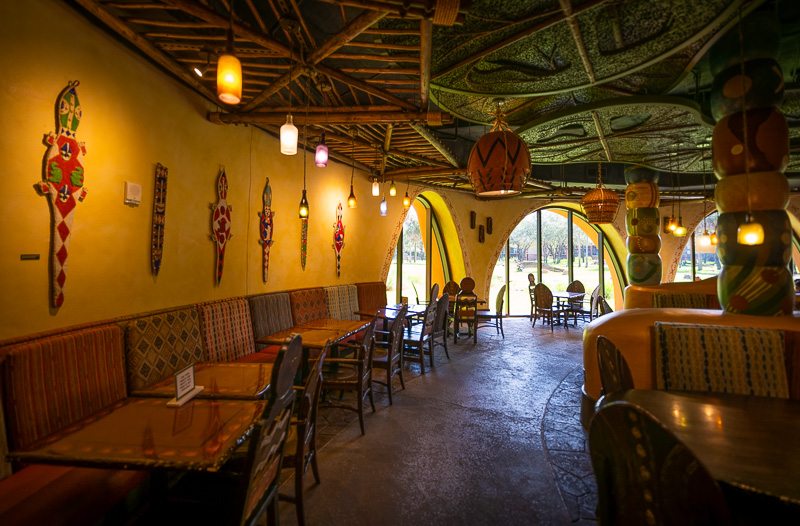 There were a couple more breakfast items we wanted to try at Sanaa, but those will have to wait until next time. That is, if we can convince ourselves not to order the Shahi Tukra French Toast again. (The Eggs Benedict was also good, but not that good.)

Ultimately, both of these meals were magnificent, great “new” ways for us to enjoy one of favorite restaurants at Walt Disney World. However, the “Sanaa Dilemma” remains the same as always. For first timers reliant on Disney transportation, getting to and from here is too much of a time commitment.

Conversely, Sanaa is unquestionably worth the trek to Kidani Village if you’re staying at Jambo House, have a rental car, or drove to Walt Disney World. If you’re a longtime or regular Walt Disney World visitor who has still yet to get out to Sanaa, you really need to stop sleeping on this hidden gem and make a meal here happen. It’s off the beaten path and getting to it can be a hassle, but it’s such a delightful change of pace–both figuratively and literally–that it truly deserves your time and effort.

What do you think of Sanaa? Have you done Mobile Order Table Service to Go here? What about the counter service breakfast? Is Sanaa worth the time and effort of getting there? Where does Sanaa rank in terms of dining at Walt Disney World for you? Have any favorite dishes at Sanaa? Any questions? Hearing your feedback about your experiences is both interesting to us and helpful to other readers, so please share your thoughts or questions below in the comments!