Those who follow the Disneyland rumor mill are no doubt aware of the reports that on September 28, 2013, the Court of Angels (Court des Anges) in New Orleans Square is slated to close as part of an expansion of Club 33. Per these rumors, the Court of Angels will become the new entrance to an expanded Club 33, and although it’s as of yet unclear whether the courtyard itself will be retained, informed speculation suggests that it is logistically impossible to keep the courtyard as-is and add the necessary accessible entrance to this location.

While I feel that it’s very unlikely that the Court of Angels will return in any recognizable form once Club 33 completes its expansion, I want to reiterate and stress that at this point, its closure is just rumor. I don’t want to be rumor-mongering over something that is potentially false rumor, but I feel that the overarching topic here is one that’s worth discussing regardless. If it returns, I will be beyond happy, and reminded that many of those who work for Disneyland also cherish the parks. If the Court of Angels disappears, it will really come as no surprise. Disney has shown that it views the area as expendable, transforming it into an ornament shop each of the last several Christmases, and using it for Pirates League last Halloween.

Some in the Disney community have suggested a campaign to “Save the Court of Angels,” with petitions and that sort of thing. That’s not the purpose of this article, and I don’t believe any such campaigns have a remote chance of success at this late stage. Unlike sentimental attractions even casual guests have cherished memories of, the Court of Angels is something that likely goes unnoticed by large swaths of the general public. Therein lies the problem. On paper, the Court of Angels is expendable because it serves no quantifiable function and average guests won’t even know what they’re missing.

There’s nothing particularly noteworthy about the Court of Angels for most guests. It doesn’t house an attraction. It has no strong ties to Walt Disney history. In fact, I’d hazard a guess that some of you reading–even those who have visited Disneyland before–have never even heard of the Court of Angels.

The Court of Angels is “just” a tucked away serene and quiet spot. It’s just the most beautiful corner of the most beautiful land in Disneyland. It just embodies everything most of us love about the Disney theme parks: gorgeous details and beauty for no particular reason, save for that incredibly important reason that those aforementioned qualities are exactly what set Disney theme parks apart from other parks. For many guests, these “Disney Details” and themed environments are what gives Disney theme parks their allure. We come back time and time again, and spend countless hours wandering places like World Showcase or Cars Land not because of anything on a park map, but because of the ambiance of simply being there.

The significance of these details isn’t lost on those working for Disney, either. I have countless Disney coffee table books featuring art and analysis from Walt Disney Imagineering that illustrate exactly how important those details are to the overall guest experience. The Disney Parks Blog even has a recurring piece called “All in the Details,” showing off the heavily-detailed quality of the parks. And they’re right to tout these details, as they are important. While the Disney parks might be just as popular with average guests so long as they didn’t get rid of the castle, Dumbo spinner, or Mickey Mouse meet & greet, many within the Company know that appealing to the lowest common denominator by making business decisions only on the basis of the ‘average guest’ is a slippery slope with long term consequences.

While I have little doubt that many individuals working for the parks understand the importance of these details, in the grand scheme of operations, actions speak louder than words. In terms of actions, in recent years it has become clear that some of these details are not as important as is stated. A corner with some pretty flowers or a water fixture but no defined function is actually dead space. As fans, we always hear that the “Accountaneers” are to blame for this–the folks who pore over spreadsheets and study reports on retail profitability per square foot.

Honestly, I don’t know if the supposedly “evil” Accountaneers are to blame, nor do I care. I think it’s fairly undeniable that various elements of the parks that could best be described as beauty for the sake of beauty have proportionately decreased over the years, while the proportionate square footage of dining and retail has increased over the years. Regardless of the cause for such a shift, to me, the decrease of one and increase in another says everything that needs to be said.

The point of this article thus is not to start a campaign to save the Court of Angels that is likely predestined for failure. Instead, it’s to remind one another, and maybe those who make the decisions or those who view the parks as figures on a spreadsheet, that things like the Court of Angels are incredibly important to the Disney theme park experience. It’s the little moments we treasure just as much as a ride on Space Mountain, and it’s the little details that become indelible parts of our memories from visits to the parks over the years. These little things might seem superfluous on paper, especially when the alternative is expanding a private club that can generate $35,000+ on each new member it’s able to accommodate, but they are what help define our days in the parks, and what keep us coming back.

Monetization and profitability are critical elements of the theme park business, but there also is a long term price to be paid for maximizing short term profits at the expense of the guest experience. There are only so many supposedly superfluous ‘fatty’ experiences that can be cut before you get to the bone. It might be too late for the Court of Angels, but here’s hoping other details and quiet corners aren’t similarly lost in the same manner. In the face of potential new retail and dining, the details shouldn’t always be viewed as “the fat.” 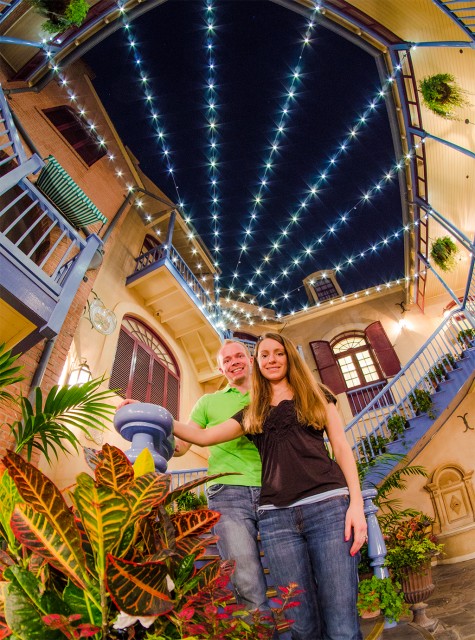 As for the Court of Angels, now seems like a good time to look back and share those memories we all have formed there over the years. Our memories of it are pretty simple–it’s a place we visit to slow down during the day, usually to just sit on the steps and look around. At night, it has been one of our key points of mischief. Like vagrant loiterers, I can’t count the number of times I’ve felt the slow tap of a security guard’s foot as he waits for me to finish “just one more” 30 second exposure of the Court of Angels. My favorite memory of it, oddly, is not when it was serene at all, but on the first Disneyland 24-hour day at about 3 am when the place was littered with napping guests. It felt like the aftermath of a war, and was bizarre at the time. Now I laugh at the memory, thinking about just how dedicated many of those fans were to spending 24 hours in Disneyland.

We intend to see the Court of Angels once more before September 28, 2013 (as you can tell, I need some more shots that are of the details, and aren’t fisheye! ;)). Here’s hoping that’s not our last memory of the place!

If you have formed memories from the Court of Angels, I encourage you to share them in the comments. Even if not, share whether these little “Disney Details” are important to you.

74 Responses to “The Court of Angels Is Important To Disneyland”