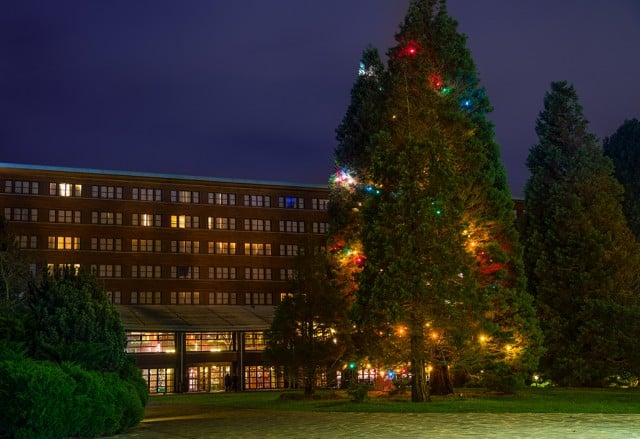 Disney’s Sequoia Lodge is a hotel at Disneyland Paris, with an aesthetic inspired by America’s National Park lodges with a modern twist. (Imagine if Frank Lloyd Wright designed Yosemite’s Ahwahnee.) Disneyland Paris doesn’t tier its hotels the same way that Walt Disney World does, but Sequoia Lodge would occupy about the same position as Wilderness Lodge, on the cheaper side of the Deluxes. Price-wise, it’s in the mid-range of Disneyland Paris hotels.

The short walking distance to the parks is an obvious pro, but the con is the lack of a grand and cavernous lobby. This lobby, to us, is a defining characteristic of Wilderness Lodge. Mind you, not every National Park lodge has a grand lobby like this, but it’s certainly a great characteristic that Sequoia Lodge is lacking. This is especially true at Christmas-time, when the beautiful Christmas tree makes a great centerpiece to the Wilderness Lodge lobby.

Otherwise, Sequoia Lodge is pretty much neck and neck with Wilderness Lodge. The details in Sequoia were great, with lots of nice finishing touches, murals, and art you might expect to find in a National Park lodge. Of course, this was all on the rustic side. This rustic look and feel is fine by me and perfectly on-theme, but if you’re primarily interested in luxury, the theme is inherently limiting in that department. 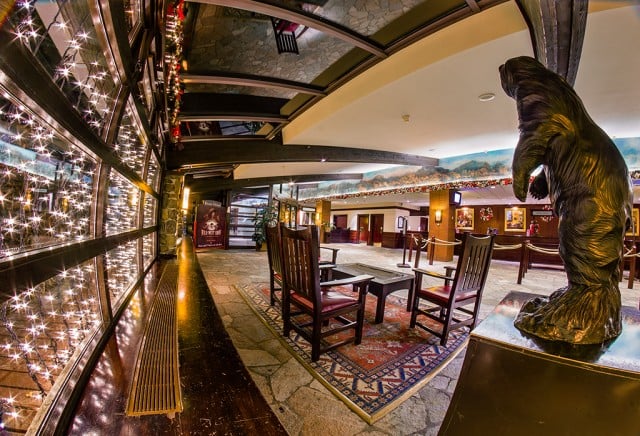 This is why we felt the modern choice of architecture was a wise one. It balanced out the rustic theme a bit and made the hotel border on trendy (to be sure, it’s not). From the clean exterior lines to certain light fixtures and fireplaces, it feels like a modern take on a National Park lodge. This is one case where two contrasting styles compliment one another, rather than clashing. There’s no identity struggle, it just works.

The thematic highlight of Sequoia Lodge is definitely Redwood Bar & Lounge. We stopped by here a couple of times, and it captured the essence of the lodge wonderfully. The furniture was large and luxurious, the lights were low with the table we were at being mostly lit by white strands of Christmas lights in a window that looked through to the lobby. In the center of Redwood Bar is a beautiful pass-through fireplace that is stunning. We literally could have sat by this fireplace for hours. At its best, Disney transports you to a different time and place. This fireplace definitely did that, and sitting in the lounge watching it was a really enjoyable experience. Relaxing next to it after a long day in Disneyland Paris felt more like unwinding after a long day of winter hiking in a National Park lodge. It may “just” be a fireplace, but as always, it’s the Disney details that make the difference. 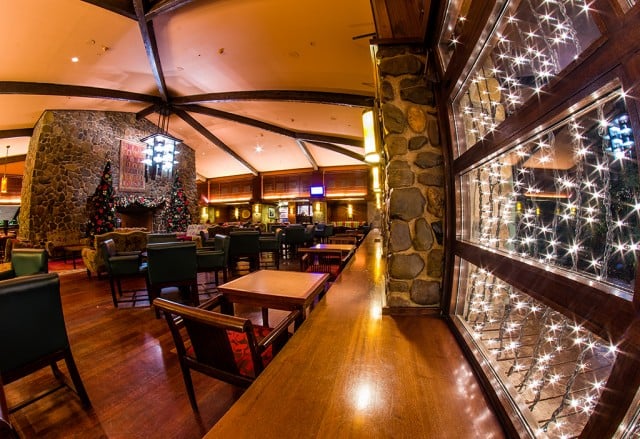 Restaurants at Disney’s Sequoia Lodge include the aforementioned Redwood Bar & Lounge, plus Hunter’s Grill (table-side carved meats–the more expensive of the two restaurants) and Beaver Creek Tavern (buffet featuring barbecue). We dined at Hunter’s Grill and Beaver Creek Tavern for breakfasts (included with the hotel stay) and while these meals were fine and the restaurants had nice ambiance, these included breakfasts were not a sufficient basis for us to judge the restaurants. Redwood Bar & Lounge was exceptional, and we highly recommend even non-drinkers visit it. As for breakfast, we recommend booking it early–2 hours before park opening. We booked breakfast one morning at 8 am, and we waited in line 45 minutes. The mornings we did 7 am breakfast, there was never a wait. 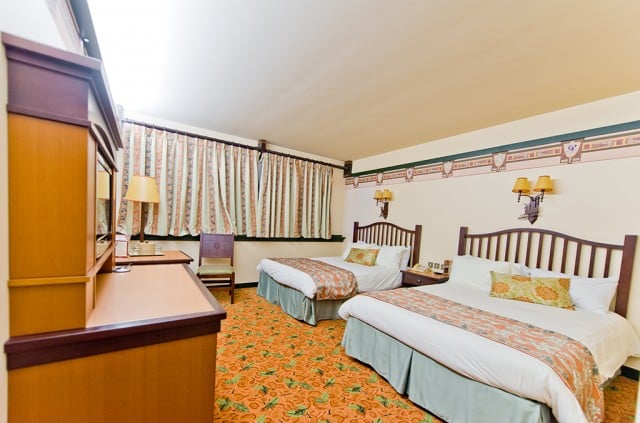 As for Sequoia Lodge’s rooms, we can’t quite heap on the praise. The rooms had been refurbished shortly before our stay, but they still left something to be desired. I think this is a fairly common complaint with this style hotel, and even Wilderness Lodge and the Grand Californian Hotel aren’t immune to it. The theme makes it difficult to convey the sense of luxury that the price suggests. 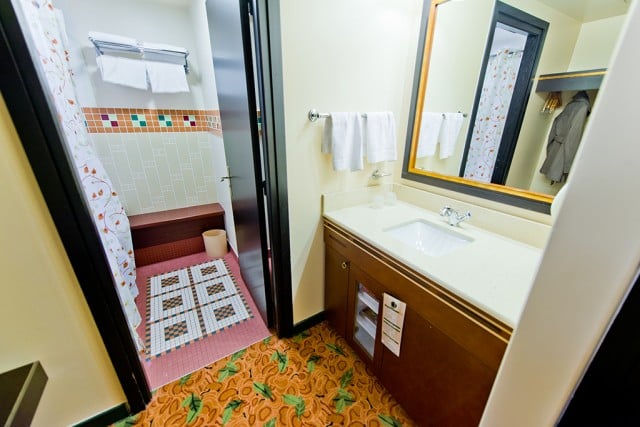 This is not to say that anything was wrong with the room. It was spacious with large beds (albeit on the hard side), and a nice bathroom. As compared to Wilderness Lodge and (especially) the Grand Californian, I think the details and little touches in the room were a bit sparse. In fairness, Sequoia Lodge is less expensive than both Wilderness Lodge and (especially) Grand Californian. In any case, we still thought the rooms at Sequoia Lodge were fine, and we don’t mind the rustic theming. 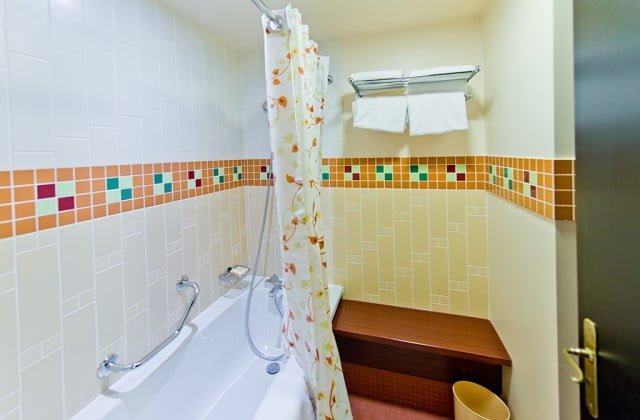 Recently, Sequoia Lodge opened a new booking class called the Golden Forest Club. This is similar to the Castle Club in Disneyland Hotel (which offers views of Paris’ castle!) and the Empire State Club at Disney’s Hotel New York. In this case, the rooms are on the top floors of the main building and offer access to the Golden Forest Club Lounge.

This lounge features a giant tree with golden lanterns hanging from its branches, and serves breakfast with Disney characters and free drinks and snacks in the afternoon. Of course, rooms in this class cost significantly more per night. We haven’t stayed at the Golden Forest Club level, and probably won’t given that we feel it offers poor value. If our budget allowed, we’d probably rather put that money towards splurging on a night in the Disneyland Hotel.

Speaking of which, although we’ve only stayed in Disney’s Sequoia Lodge, we have toured each of the hotels at Disneyland Paris, and Sequoia Lodge is our top pick for the best mix of value and quality, based upon what we saw. Disneyland Hotel is the nicest overall, but with prices over double the cost of Sequoia Lodge during our visit, it was out of the question. If money were no issue, we’d stay there. Sequoia Lodge would be our #2 pick if we had an infinite budget, which would put it ahead of the more expensive Hotel New York and Newport Bay Club. 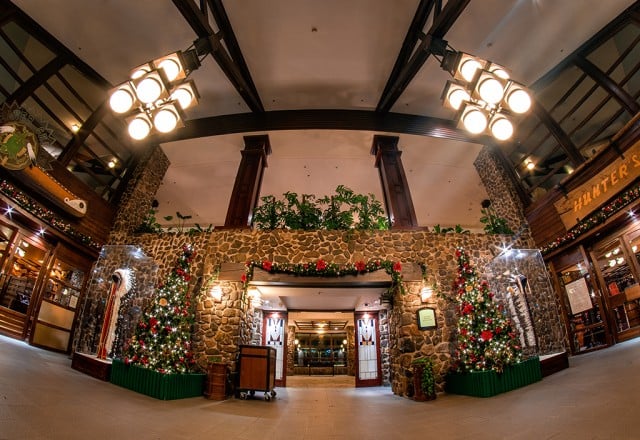 Overall, Disney’s Sequoia Lodge is a great compromise of theme and value if you want an on-site Disneyland Paris hotel. The theme is enjoyable, especially around Christmas and the hotel is a short walk to the parks. There are other strong selling points, such as the great Redwood Bar & Lounge, but ultimately it’s the cross of a great theme and a price point that isn’t too overwhelming (for a Disney hotel–Val d’Europe has hotels that are quite nice for less money) that makes Sequoia Lodge a standout for us.

Have you ever stayed at Disney’s Sequoia Lodge? What did you think of it? Planning a stay? Your comments are half the fun, so please share any questions or feedback about Sequoia Lodge at Disneyland Paris that you have in the comments!