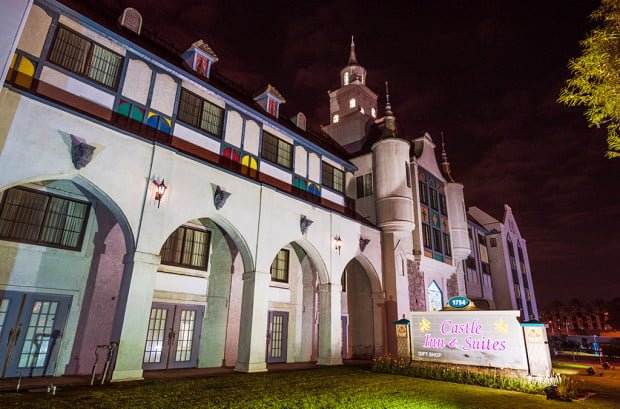 Castle Inn & Suites is a Disneyland Good Neighbor Hotel in Anaheim, 10 minutes from Disney California Adventure & Disneyland. This review has photos of the hotel, thoughts about our experience of staying here, and our take on who might like this hotel most.

If you’ve ever been down Harbor Boulevard, you’ve probably noticed Castle Inn & Suites–it’s the hotel that looks like a medieval castle. Basically, if you’ve ever found yourself lamenting the fact that you can’t stay in the Cinderella Castle Suite (at Walt Disney World–not Disneyland) because you’re not a high-roller like Tom Cruise, this is the “perfect” alternative for you.

Well, sort of. The rooms here are in a castle-like building located in the United States, but that’s about where the similarities to the Cinderella Castle Suite end. Castle Inn & Suites is a kitschy-looking motel with an exterior that looks like a castle that has seen better days.

From the outside, it looks like its best years were about the same time when the Medieval Times Dinner & Tournament was popular. Much like that dinner show, which declared bankruptcy in 1997 but has inexplicably been sputtering along since, Castle Inn & Suites also still exists.

Actually, although Castle Inn & Suites does ostensibly appear to be “Medieval Times: The Motel”, it’s actually a fairly solid hotel. Most people who see photos of Castle Inn & Suites’ exterior probably think they know the score here, so to speak. It looks like a motel that was decorated in a medieval style in the 1980s when that was en vogue, attempting to lure families here who might be willing to pay a premium to stay in a castle because their “kids would love it.” 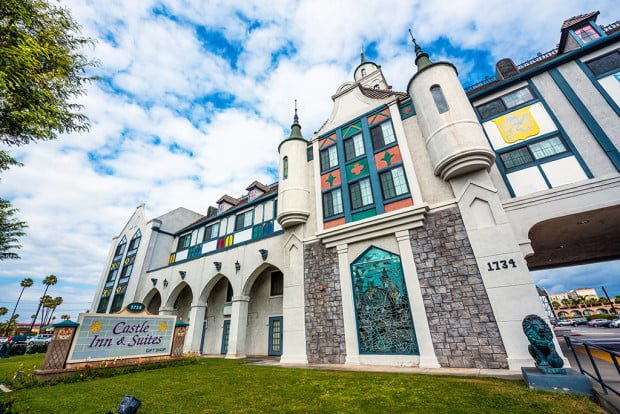 Before we get into the actual quality of the hotel, let’s start with a bit of background. Castle Inn & Suites is one of the 39 Disneyland Good Neighbor Hotels. You can get an idea of how it stacks up to the competition in our Disneyland Hotels Reviews & Rankings post. If you want an overall comparison of the benefits of staying off-site versus on-site in our Off-Site v. On-Site Hotels at Disneyland post.

In terms of location, Castle Inn & Suites is on Harbor Boulevard near the intersection with Katella Ave., meaning that it’s not directly across the street from Disneyland. Still, it’s pretty close, being just shy of a 10 minute walk to the Esplanade. Of course, walking is for peasants. I assume you knights of the round table reading this can probably just ride your destrier to the parks in like 45 seconds. 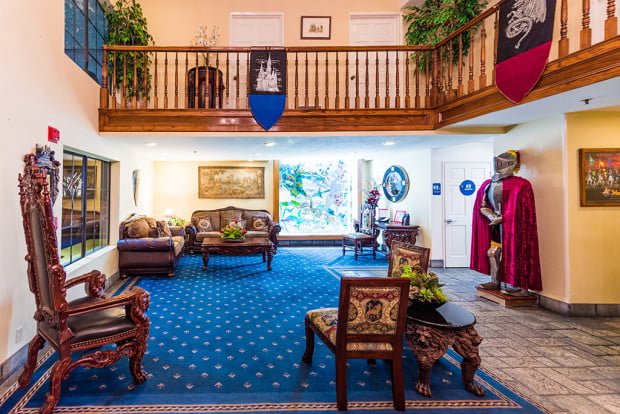 The fact is, Castle Inn & Suites main selling point for many–and the reason others (myself included prior to staying there) are dismissive of it–is going to be its exterior appearance. That’s its defining characteristic, and why most people will book it over alternatives. Once you pass through the curtain wall, through the ward, and into your chambers (can you tell someone just Googled “Castle Terminology“?), you’ll find there’s more than meets the eye.

For starters, WiFi and parking are both free and both work, in the sense that the WiFi is fast and the parking is plentiful. This isn’t the norm at all Disneyland area hotels, so that’s nice. There’s also a halfway decent (by Harbor Blvd. standards) outdoor pool and hot tub, guest laundry, and in-room coffee makers with coffee. I don’t know why I’m pointing out the coffee, as 99.99% of hotels have this, but Castle Inn mentions it 3 separate times on their amenities page, so I’m guessing they think it’s a big deal? (It’s not.) 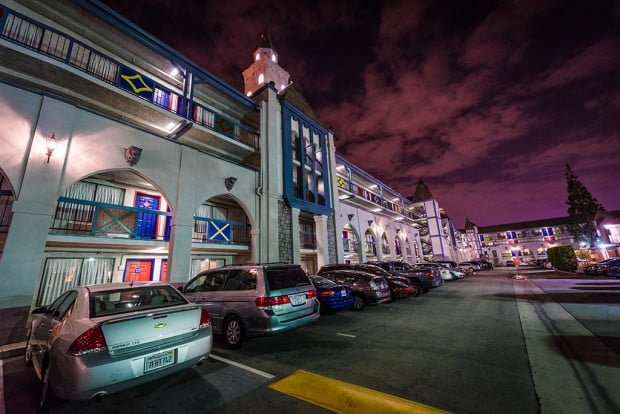 Then there are the guest rooms. I didn’t hear any noise outside my room and the AC unit wasn’t obnoxiously loud, two things which are also not the norm at hotels near Disneyland.

Now, the rooms themselves don’t look like they have been updated recently (the bedspreads are a giveaway), but there is something nonetheless nice and endearing–at least to me–about these rooms. 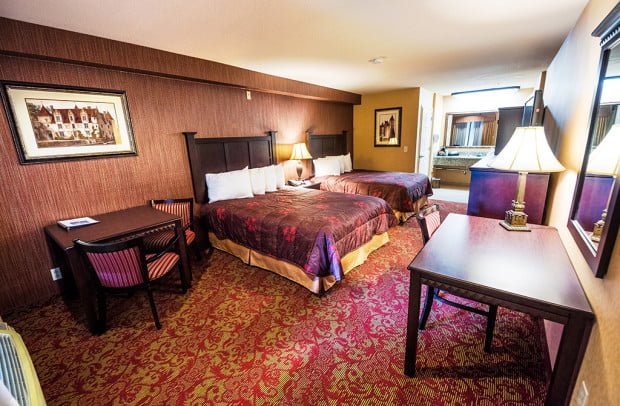 For starters, the room interiors have aged much better than the exterior. I really like the framed castle art in the rooms. I know this is such a minor thing, but it stood out to me, and didn’t in any way feel hokey or dated. To the contrary, it classed the place up a bit and gave it some character. 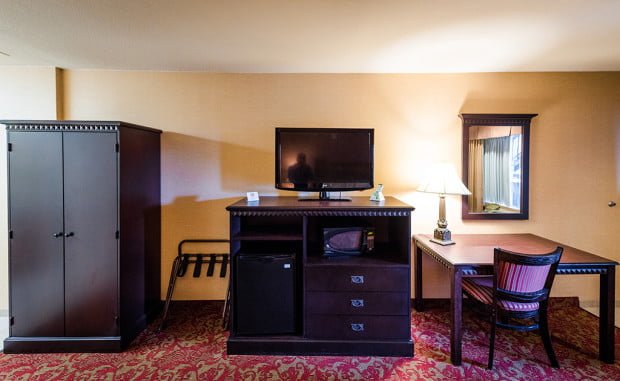 Likewise, the carpet was textured and looked nice. The entire room looked nice, actually. Even though I knew based on the design that it probably hadn’t been remodeled any time recently, it was still clean and had a quality look to it. It’s as if the hotel were dated, but almost by design and in a manner that didn’t make it feel tired. 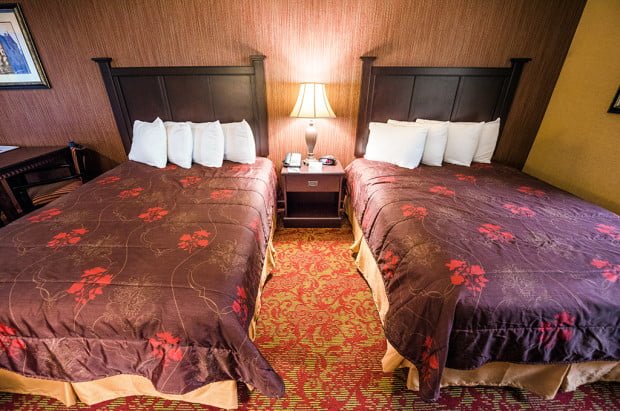 The bedding is passable. Certainly nothing “fit for a king”, but also not peasant rubbish. It won’t be your best night of sleep ever, nor will it be your worst. Nothing noteworthy. 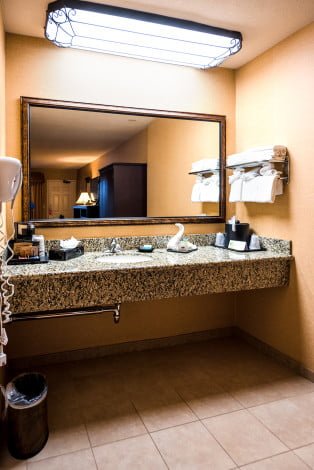 The sink is outside the bathroom, which is pretty common of the hotels near Disneyland. Both areas are incredibly basic, albeit clean. Nothing particularly noteworthy here, either. 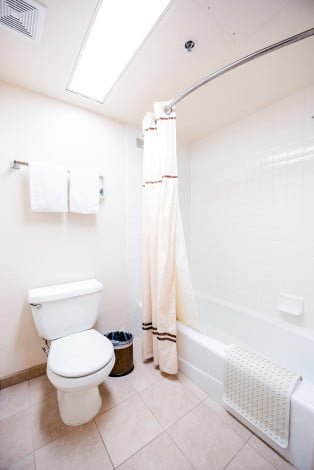 You might think I’m being generous to the room because I went in with low expectations. In all honesty, I figured the hotel was simply a gimmick that would rest on its medieval style with the rooms and amenities being paltry.

That’s not the case at all. While the rooms certainly aren’t the nicest in the area–not even close–they don’t feel like an afterthought. They are reasonably nice and most guests will find them suitable as basic hotel rooms go. 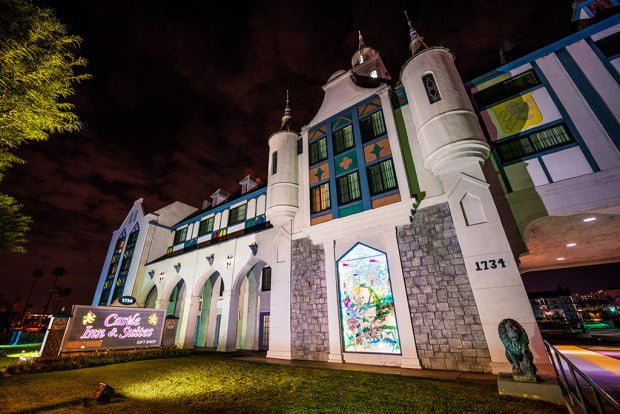 The fact with Castle Inn & Suites, though, remains that it’s a hotel defined by its style and, in most cases, that is going to be the main selling point. Staying here is something that will “make” a trip to Disneyland for some kids (I recently overheard a little girl say to her father, “can we stay in Cinderella’s Castle next time we come?” when passing by the hotel).

The overarching point of this review is that Castle Inn won’t disappoint in terms of the rooms if you are considering staying here for the sake of your kids (or for the sake of the adults in your party who obsess over the royal baby despite living in a country that fought a war for independence from the monarchy). If you don’t care for the medieval style, you more than likely won’t end up here. This is the case mainly because of pricing–you will generally pay a bit of a premium for Castle Inn & Suites’ style as compared to other similarly-situated hotels near Disneyland. 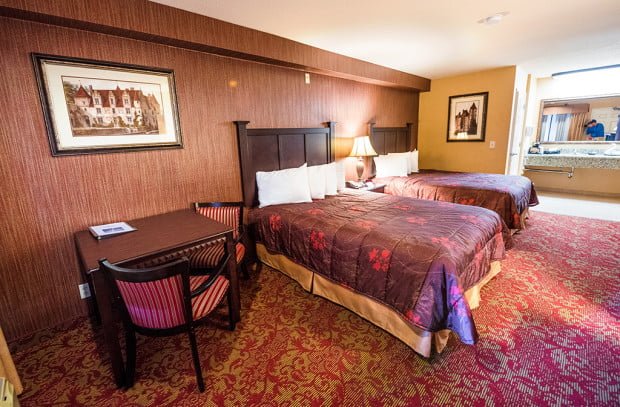 Rack rates at Castle Inn & Suites are sort of kooky, at least in my experience. In checking rates now through September, they are all pretty much in the range of $150-170/night base. Some summer weekends are less expensive, some more expensive.

Christmas week has significantly cheaper rates, with prices around $120-130/night for the holidays. I can’t explain some of the summer pricing, but I assume rates are lower the further in advance you purchase. With many Disneyland-area hotels, the best approach is to book as early as possible for the best rates, or hope for availability at the last minute for something cheaper. With the latter approach, you’ll need to be flexible in where you’re willing to stay. 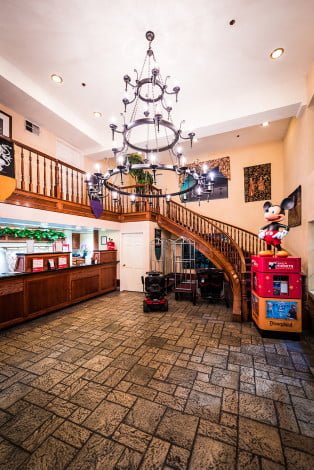 Overall, Castle Inn & Suites is a hotel that I’m betting most people book to make the trip special for their kids who will be thrilled by the idea of sleeping “in” a castle. The bad news there is that you’ll pay a bit of a premium for that (roughly $20/night on rack rates). The good news is that the premium isn’t a staggering amount, and more importantly, the hotel rooms are fairly appealing, well-maintained, and clean, albeit a tad dated. Given that Castle Inn & Suites could likely rest on their laurels of being “the castle hotel” and still have a high occupancy rate, it’s nice that they actually do make an effort and have fairly solid rooms. You won’t feel like actual nobility at Castle Inn, but you won’t feel like a peasant, either.

Get discounted pricing on a Disneyland vacation package that includes your stay at Castle Inn and park tickets via Get Away Today. We always recommend them to save money on Disneyland tickets, and this is a great way to get an even better deal by purchasing a bundle that includes hotel and tickets. Click here to price out your dates!

Have you stayed at Castle Inn & Suites in Anaheim? Did you enjoy your stay? What did you think of the guest rooms? What about the medieval style? How did your kids react to “staying in a castle”? Considering this hotel? Do you prefer staying off-site or on-site at Disneyland? Please share your thoughts or questions in the comments section below!