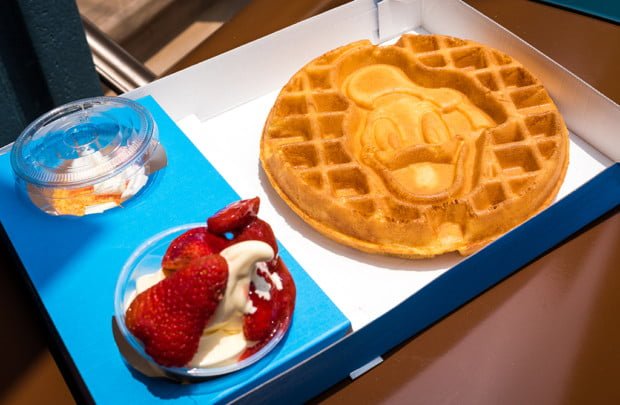 There were splashes of Tokyo DisneySea theming throughout the park, but Il Paperino was more like a tidal wave of DisneySea. Tucked away down an intimate alley towards the end of Mickey Avenue, it had a gondolier motif that was reminded me of Gondolier Snacks, also a gelato shop, near the gondolas in Mediterranean Harbor.

Despite the ostensible similarities, the two snack spots are considerably different, with Il Paperino being populated with Disney characters, and having a more cartoonish vibe. Both locations work, but I’d say Il Paperino is actually more of a standout at Shanghai Disneyland.

Even though this was bursting with so many guests that we had to eat our ice cream on top of a trash can, I’d bestow “hidden gem” status on Il Paperino because it’s not the kind of spot you’re going to hear many people raving about in their summaries of Shanghai Disneyland. It’s definitely worth checking out as a cute spot with some great detail work inside and outside around the cute alley in which it’s located. Having exceptional ice cream certainly didn’t hurt my opinion of the place, either.

One of the great benefits of visiting a new park is having a desire to see shows. There are a number of well-done shows at Walt Disney World, for example, that we haven’t done in years because we’ve had our fill of them over the years. I don’t know why we find that shows have less ‘replay value’ than attractions (especially since shows can differ upon repeat viewings), perhaps it’s a matter of scheduling? I don’t know. 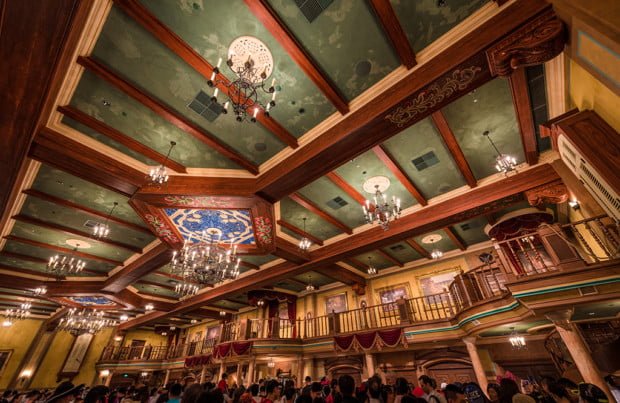 In any case, “Eye of the Storm: Captain Jack’s Stunt Spectacular” at the El Teatro Fandango was high on our list of things to do. You might think the theater’s name was a blatant sponsorship, but it turns out that fandango is actually a word that means something. Next you’re going to tell me that Google is also a word with meaning. In both cases, the brand meaning has probably swallowed the term for us, but the same probably isn’t true in China. 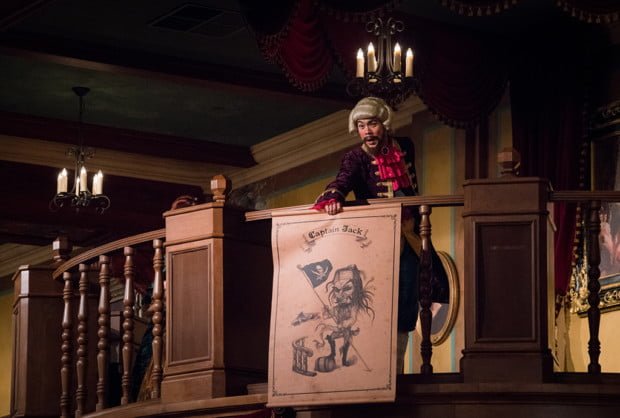 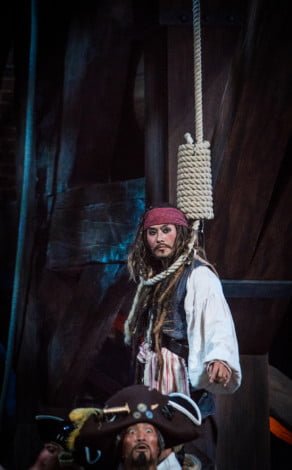 The thing about Disney attractions is that they are a highly visual medium with storylines (to the extent that they exist at all) that are usually incredibly easy to grasp even if you don’t listen. To the extent that the audio matters to the attraction, it’s more often in terms of the score, and that’s almost always universal. These attractions are usually aimed at a broad audience (including young children) so they need to be quickly grasped, and visuals are the easiest way to do that. Nothing even remotely like a Christopher Nolan mind game going on. 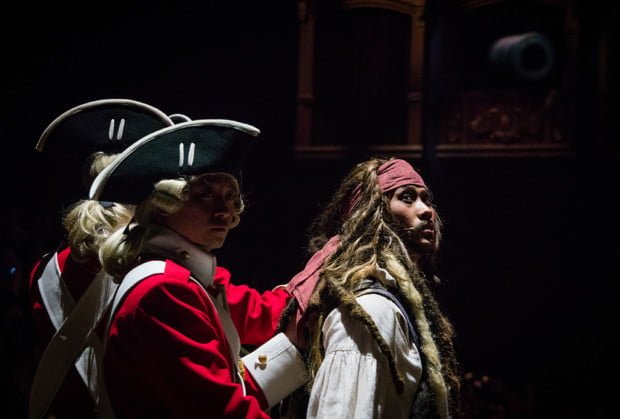 As for Eye of the Storm, it was excellent. Costuming, acting, visual gags, and the action were all very well done. Jack Sparrow matches wits and swords with British naval officers in pursuit of him, with pretty much the whole bunch being babbling idiots. Hilarity ensues. 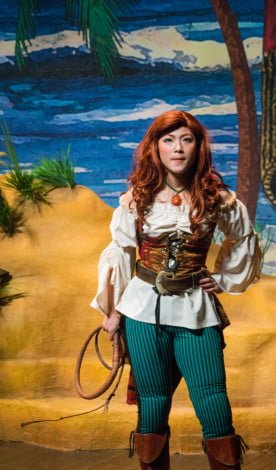 The exception to the ‘babbling idiots’ bit is the female lead, who is the one character in the show who comes across as both strong and competent. I’m not sure who she’s supposed to represent from the films (Angelica would make sense–or perhaps an original character?), but it’s refreshing to see Disney depicting its female characters this way.

The quality of the show would be high regardless, but there’s a wow moment in the show that is delivered in the form of an Jack Sparrow and one of his captors being caught in the eye of the hurricane. This is an amazing sequence, and my photo doesn’t really do it justice (the video screen and my camera didn’t play nice with one another). 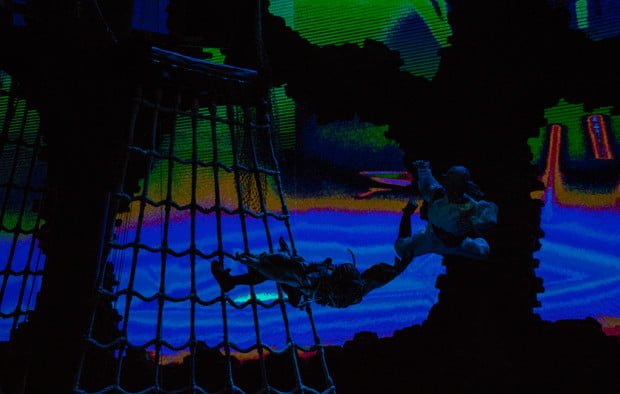 However, the company that produced this unique, wall-less wind tunnel has a page with more information about it (along with video) that is really fascinating. Even if not understanding the dialogue in the show matters to you for some reason, Eye of the Storm is worth seeing for this one effect, alone. It’s that awesome. 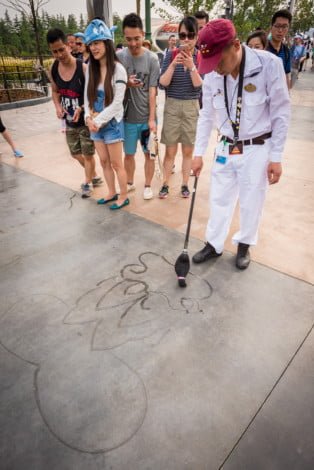 After this, the three of us split up. Sarah was going to take a nap (the lure of Duffy was too strong and she went shopping instead) and Mark was going to meet a friend while I wandered around aimlessly. 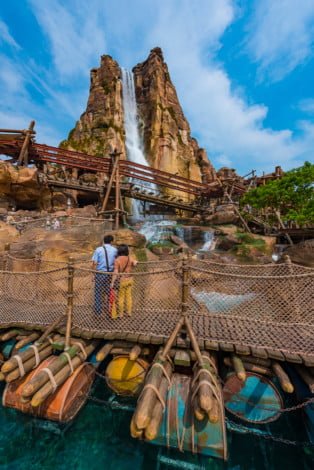 My wanders first took me to Camp Discovery in Adventure Isle. This could be (mis)categorized as a play area akin to Redwood Creek Challenge Trail, but it takes that same concept and style and expands upon it and offers an elaborate, expansive area that holds appeal for guests of all ages. That’s a line you hear a lot for areas like this, and it’s seldom true. (If anything, the official attraction page for Camp Discovery undersells the area instead of embellishes it.)

Despite being an exemplar among play areas, Redwood Creek Challenge Trail itself is plagued by this problem. It’s okay for adults to take their kids through once, but there is no independent appeal for the older audience. Camp Discovery, by contrast, has winding trails that pass by waterfalls and are satisfying, quiet experiences for adults and older guests.

If anything, Camp Discovery seems weakest for kids. Its “Excavation Site” looks fun enough (for kids) but it’s the least fleshed out of the three main components of Camp Discovery. The aforementioned “Vista Trail” (for older audiences) offers ample space for walking and quiet relaxation alongside interesting visuals, and the more intense “Challenge Trails” (rope courses) are actually intense and provide an exciting, physical experience for teens and above. I mentioned in our Impressions post that these rope courses were a highlight of Shanghai Disneyland, and I really hope they aren’t changed due to the rigors/dangers of the course.

On this particular afternoon, the rope courses had a ~60 minute wait (getting harnessed in takes some time), so I opted for the Vista Trails. I spent a good 20 minutes wandering around some of these, and found what I saw to be quite lovely. 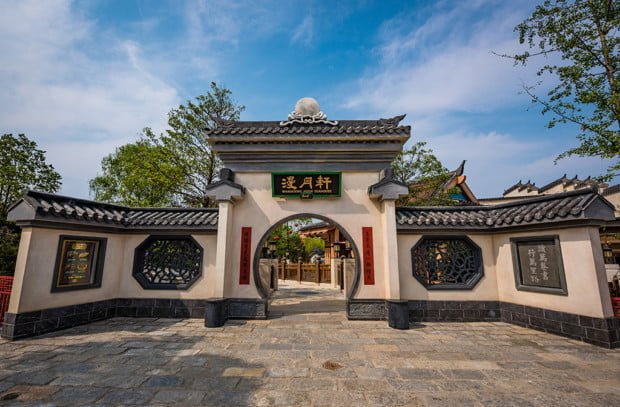 I had more time to kill until we all planned on meeting back up, so I decided to partake in one of the more glamorous aspects of blogging: photographing restaurant seating areas. For reasons beyond me, people don’t like to be photographed while eating, so I try to take these photos when seating areas are close to empty. Usually, mid-afternoon is the perfect time for this task. 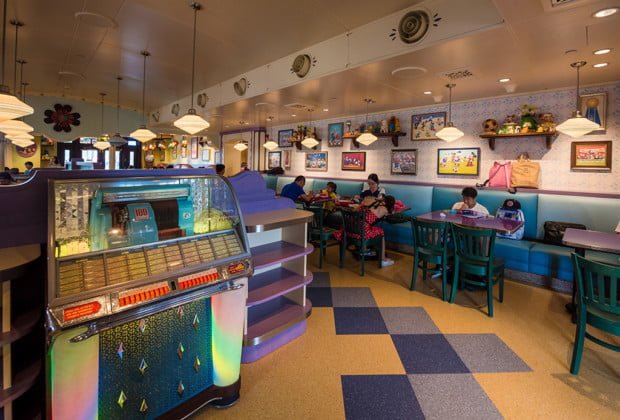 That was not true at Shanghai Disneyland. Due, presumably, to the heat, lack of shade outside, and lack of easily-accessible air conditioned attractions, every single seating area was filled with people. On the plus side, most of them were sleeping or resting as opposed to eating, so they didn’t mind me taking photos. (Because everyone loves their photo being taken while they sleep!) 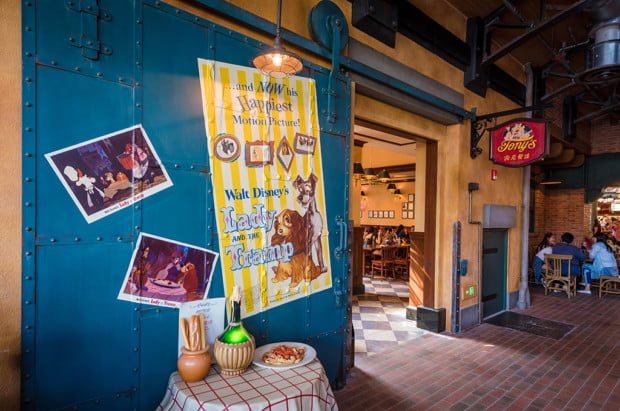 I gave up on this after encountering the same scenario in a few restaurants, and decided to wander around outside getting photos. I spent a lot of time in Fantasyland trying to find compositions, before realizing it was time to meet back up with Sarah and Mark at Il Paperino. 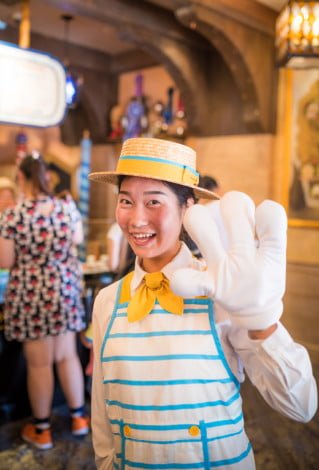 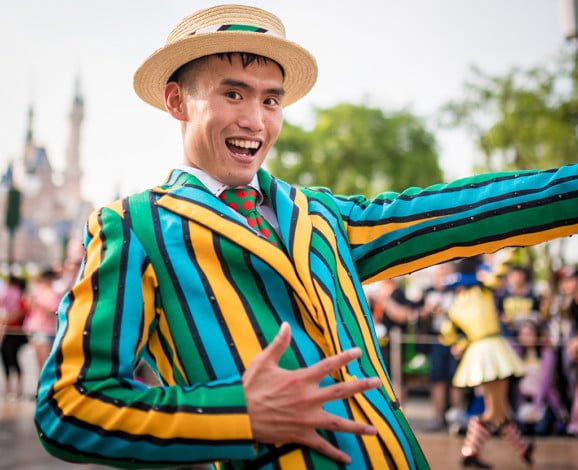 He had only seen Mickey’s Storybook Express 7 times at this point, so we had to watch it. Kidding aside, I am glad we watched it, but it was pretty unremarkable. 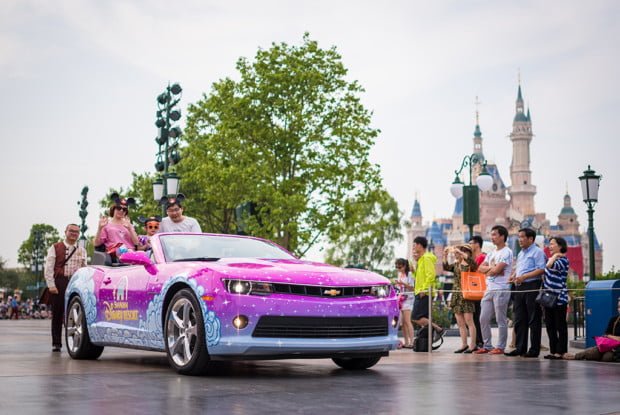 The costuming was very good (in segments) and there were a couple of strong floats–particularly the Mulan one–but otherwise the highlight was the car that preceded the parade, which set a high bar as my new dream car. I suspect the only thing that could surpass its puffy cloud, sparkles, and flashy purple-ish color would be some ill neon green lightning bolts on the side of a bedazzled hot pink Hummer. 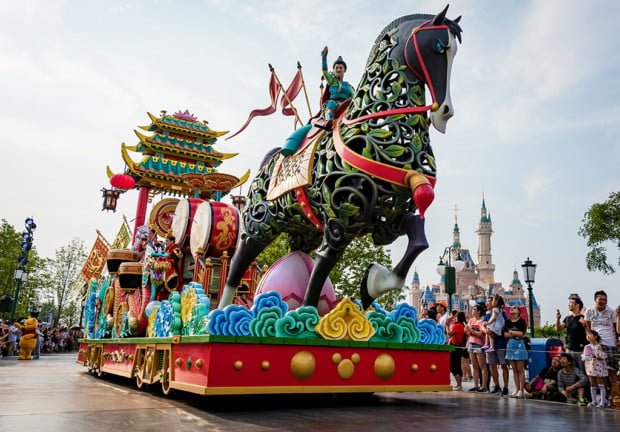 This Mulan float was on par with the floats in Festival of Fantasy, Soundsational, and other high-end productions of late, but the rest of the parade felt lacking by comparison.

Maybe if it had debuted 5 years ago, I wouldn’t feel the same way, but it seems like Disney’s daytime parades have improved across the board in that time. 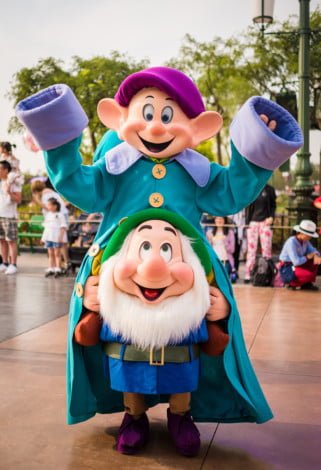 Maybe it’s just me, though. 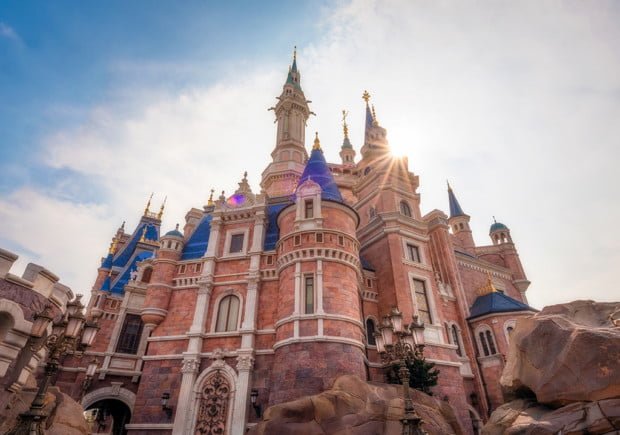 It was almost evening and we realized the golden hour sky was again looking good, so we split off in search of some good photos at this point. Surely this would fall apart before sunset…but we’ll pick up there in part 4.

If you enjoyed this installment of our Shanghai Disneyland Trip Report, we would greatly appreciate it if you’d share it via social media or leave a comment to let us know you’re reading. A lot of effort goes into trip report posts (surprising given their quality—but true! 😉 ), and we hope readers enjoy them!

What do you think of Shanghai Disneyland thus far? Would it matter to you that attractions aren’t in English? Does Camp Discovery sound like it would hold your interest? Any questions that we haven’t answered yet? We love hearing from readers, so please share any other thoughts or questions you have, in the comments!