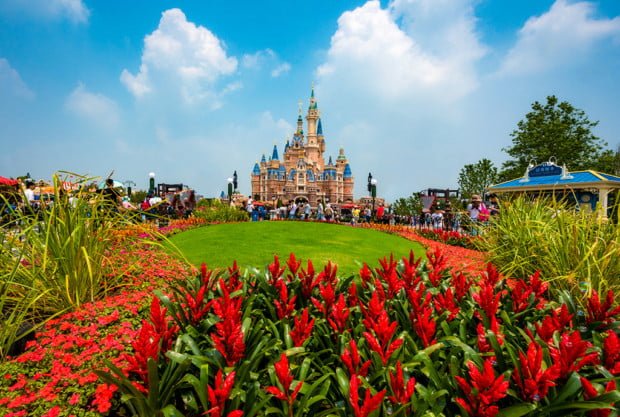 Our Shanghai Disneyland Grand Opening visit picks up here on day 2, after our experience closing out the park opening day. This is the first installment that will have (a few) on-ride photos, so if you want to avoid spoilers, exit now. Before we start running around on the second day, we wanted to briefly cover the vlog side of the trip report, which is finally here.

Although neither of us have anything remotely resembling a strong camera presence (and I’m far from extroverted–the safety of being behind a keyboard and screen just conceals that), but we wanted to give this a try. For one, many readers have asked about it. Additionally, we felt it would be a fresh format for trip reports. We haven’t done nearly as many of those as we used to, and that’s partly because of the effort required. It’s also partly because after a while, there’s a redundancy and sense of stagnation to writing them.

You might wonder why we chose the grand opening of a new park as a time to start vlogging. I was already preoccupied with photos and we had a lot of ground to cover in the park. We’ve done a few vlogs with Guy Selga, and during our last visit to Tokyo Disney Resort with them, we discovered we are a lot more comfortable on camera recording in a place where many other guests probably can’t understand what we’re saying.

Most of you are reasonable people and, as such, probably have not recorded yourselves on camera while walking around a theme park. There are any number of compelling reasons not to do so. One of which is that you feel incredibly self-conscious walking around, talking to a camera. Most other guests are totally oblivious to what you’re doing and don’t care either way, but there’s still an weariness you have.

With that in mind, it made sense to get comfortable with video in Shanghai before trying it in Disneyland and Walt Disney World. In theory, at least. Again, all this is a long-winded way of saying: lower your expectations for the vlogs. If that’s not a good “subscribe now to our vlog!” pitch, I don’t know what is. Anyway, here’s the train-wreck covering day 1:

Okay, enough trying to explain away why we suck. We’ll get better over time? Maybe. Let’s move on to the day itself.

What I neglected to mention at the close of day 1 was that Mark and I actually had to walk back to Shanghai Disneyland Hotel after we were done shooting, and I mean walk along the road. The bridge that cut across the lake was locked off, and the buses had stopped running for the night. Consequently, we didn’t get back until after midnight.

Despite this, we were all up bright and early the next morning, and at Shanghai Disneyland in time for rope drop. Unfortunately, so too were a ton of other people, as it was clear attendance wasn’t limited for day 2 to the same degree as opening day.

Security was also increased, with bag scanners and metal detectors set-up. If ever the term “security theater” was apt, that was here. Virtually everyone set-off the metal detector, and we were all just waived through despite this. No one was watching the bag scanner, and if you didn’t act quickly, your bag would fall onto the ground after being scanned. I’m not really sure what the point of this all was, but hey, at least it was quick! 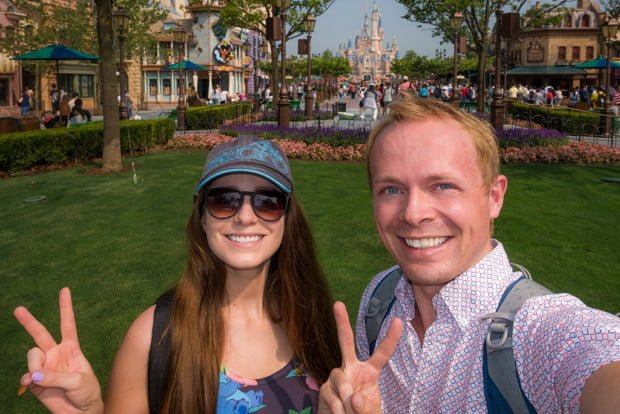 We were far less fortunate at the turnstiles, which took forever. It took us nearly 30 minutes to get inside the park, at which time we headed directly to Adventure Isle. The Shanghai Disney Resort app indicated that Roaring Rapids was down, but we were hopeful that it was mistaken, in which case we’d grab a Soaring Over the Horizon FastPass and jump into standby for Roaring Rapids.

The Soaring FastPass part of that worked, with our return time being after fireworks. Soaring is the most popular attraction at Shanghai Disneyland, more popular than both TRON Lightcycle Power Run and Roaring Rapids when you account for the downtimes the latter two have been experiencing (which inflate their wait times). 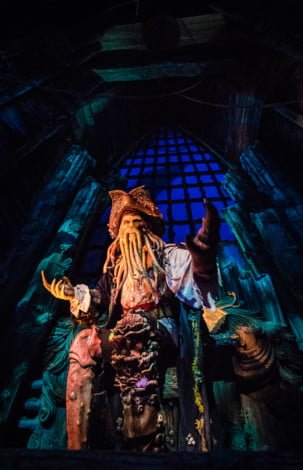 First up after that was Pirates of the Caribbean – Battle for the Sunken Treasure. This attraction had an irresistible siren song that we could not resist, even if its capacity made it a better option later in the day.

Think of it like Spaceship Earth, except instead of a giant geodesic sphere prominently placed at the front of the park to lure guests, this attraction had a fairly non-descript entrance and placement, and it was instead the substance luring people inside. 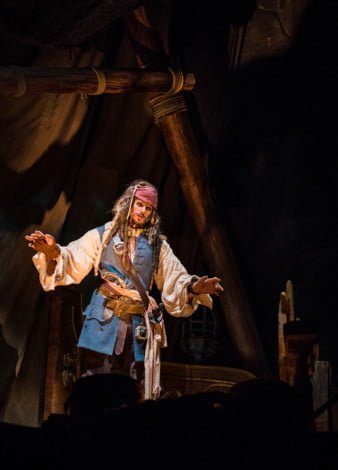 This Jack Sparrow AA early in the attraction is the first “wow” moment. I’m not quite sure how the effect of him transforming from a skeleton to Jack is accomplished, but my guess is either projection mapping (of the skeleton) or that the AA rotates (and the skeleton is on the reverse side). Given the rest of the attraction’s tech, the former seems more likely. Either way, incredibly impressive and effective. 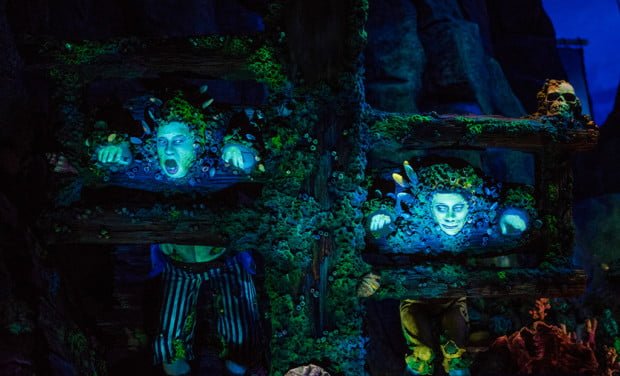 After Pirates we were fairly hungry, so we began contemplating where to eat. Wandering Moon Teahouse had been touted as the park’s flagship restaurant, so we decided to eat there. After finding that it wasn’t open yet, we had a SQUIRREL! moment when we realized that–holy cow–it was a beautiful day! There were clouds and blue sky!

Instead of doing whatever it was that we talked about doing in lieu of Wandering Moon Teahouse (I think heading back to Treasure Cove, since we knew restaurants there were open?) and just started running around taking photos. There was only a small patch of blue behind Enchanted Storybook Castle with the rest of the sky still being overcast, but that was good enough for me. 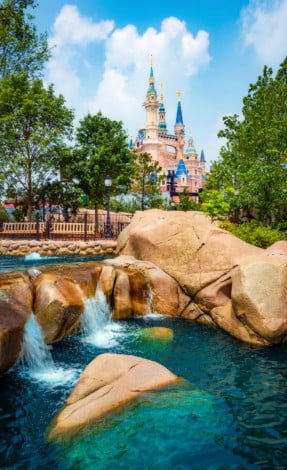 After our first two mornings in Shanghai, I was beginning to worry that this trip was going to be a photographic bust. The sky had likewise been overcast on this particular morning, and when I saw the blue sky, I was worried that it would be a small window (sort of like the hour of blue skies we had over the course of our first visit to Disneyland Paris), so I ran around making the most of it. 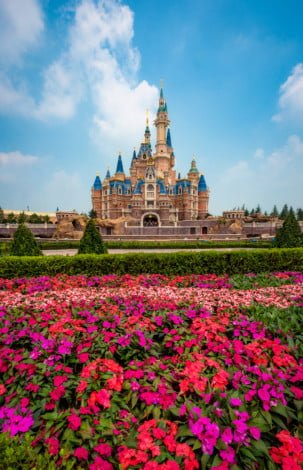 This was fairly short-lived not because the window of opportunity closed, but because the weather was unbearable. It was as if we had made a Faustian bargain for those wonderful skies, and the sacrifice was more temperate weather. This day demonstrated just how hot and humid summer in China can be, and why many travel guides caution against visiting during these months. There are probably few deals with the devil I’d turn down if they meant better photo conditions, so I can’t complain too much. 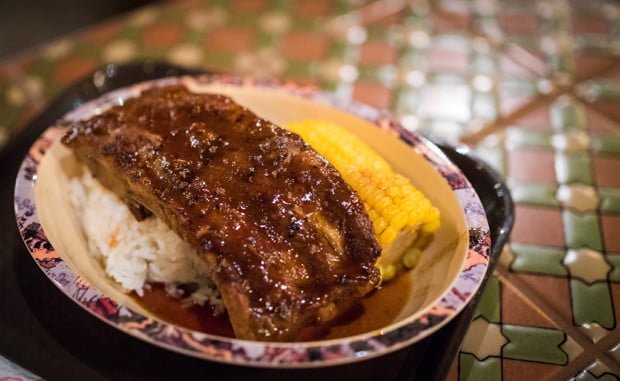 With Wandering Moon Teahouse still not open, lunch was at Barbossa’s Bounty. I mentioned in our Shanghai Disneyland Grand Opening Impressions post that this was my favorite meal of the trip. I’ll do a full review of this restaurant later, because I consider it to be one of the highlights of the park. (Mark had the ribs, pictured above.) 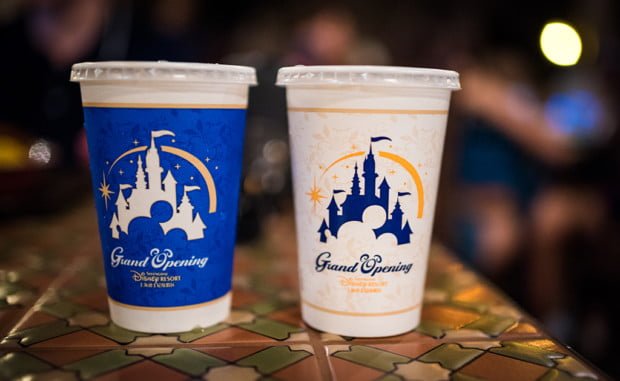 I had grilled squid that cost about $12, with a view overlooking Pirates of the Caribbean – Battle for the Sunken Treasure. The squid was a bit tough (to be expected), but the flavor was excellent and I’d actually call this a better meal than what I had last time I was at Blue Bayou in Disneyland…for about $40 less. 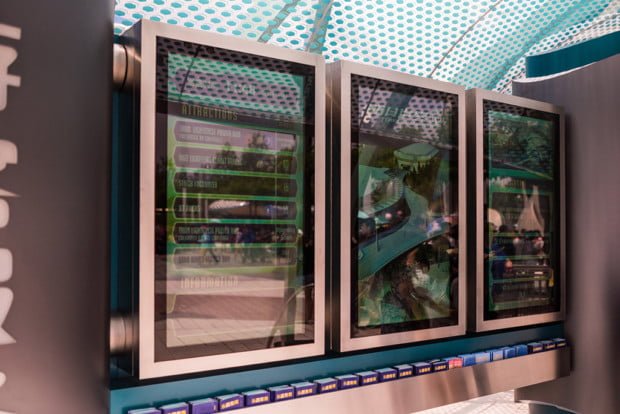 After criss-crossing the park for TRON Lightcycle Power Run FastPasses (this time with a return time at night!), we surveyed our options and realized that wait times were pretty steep for most attractions, many of which also had outdoor queues. For lack of better ideas, we decided it was time for ice cream. This would be the first of two ice cream stops that afternoon, as the humid weather was slowing our pace down to a lethargic crawl.

Click here to read about our ice cream adventures on Page 2!