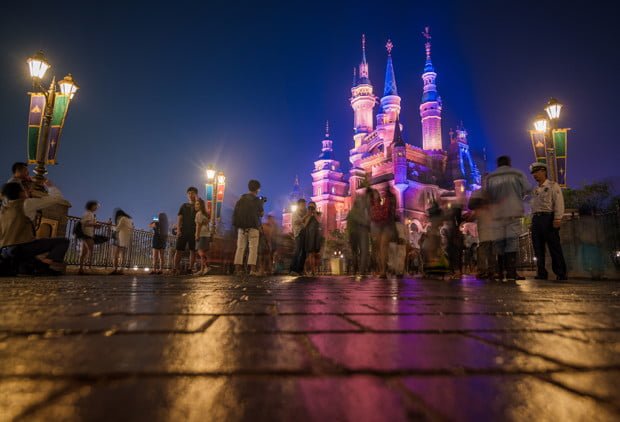 At this point, we realized that we were halfway through the day, but still hadn’t gone close to or inside Enchanted Storybook Castle, so we headed that way. I mentioned that seeing the castle in person for the first time started to win me over on its design, but walking around and through it totally sold me on it.

Maybe it’s because you’re focusing on the environment as a whole instead of singling out specific design details, but it felt less and less like a hodgepodge and more like a regal castle as I walked around it. Part of me wondered if I was just seeing it through rose-colored glasses, but Sarah felt the same way.

The final test would be how it looked at night. That’s what totally sold me on the look of the castle, particularly from the angle in the photo above. It really benefits from the show lighting, I think, and evokes the Florida and France castles from this perspective. Nothing can top the castle at Disneyland Paris in terms of charm and whimsy, and Walt Disney World’s castle takes the cake in terms of personal nostalgia, but there’s a certain grandiosity about Shanghai Disneyland’s castle that works for me.

For the first installment, I indicated that night photos had to be used due to the rain and overcast skies preventing me from taking many photos that day. That was before I reviewed all of my photos from the trip, and came to the realization that I didn’t take many photos at all outside of sunset and night shots.

As such, don’t expect many of the photos going forward to coincide with the text. I wouldn’t necessarily say I’m disappointed with my photos from the trip–to the contrary, I really like some of the sunset and night photos I took–but I did a poor job with daytime photos, detail photos, and other shots I’d normally put in trip reports. In my defense, there we were caught up in the excitement of the Grand Opening, and the midday humidity made it a real challenge to find the energy for photos. 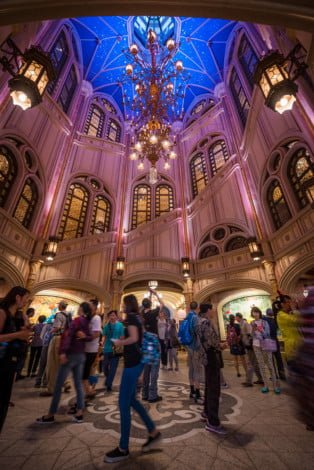 While we’re on the topic of things that are disappointing, you’ll notice there’s no vlog in this installment. (I mentioned I’d start in part 2 or 3, so I haven’t gone back on my promise yet!) This is in part because I’ve been sick the past few days, and also because I’m dreading going through the footage.

I’m not downplaying it when I say that a lot of what we recorded in the park is comically bad. Not only that, but there were large stretches when we didn’t record anything at all–hence the need to sit down at home and record some “in studio” stuff to flesh out the video. The vlogs are coming, but that might be a bad thing, not a good one. 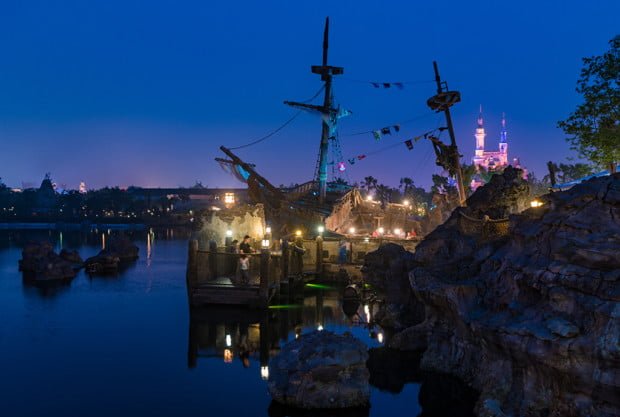 Thanks to the overcast sky, the transition from day to night was anything but. All of the sudden it was just nighttime. We found ourselves in Treasure Cove (again) at this point, and looking around, it was clear how much everything benefited from the show lighting at night.

I think this is fair to say about every Disney park, but it’s more pronounced when you don’t have those puffy Florida clouds against a bright blue sky. Plus, some places do show lighting better than others. Treasure Cove, Adventure Isle, Tomorrowland, and Mickey Avenue all do it very well in Shanghai Disneyland. 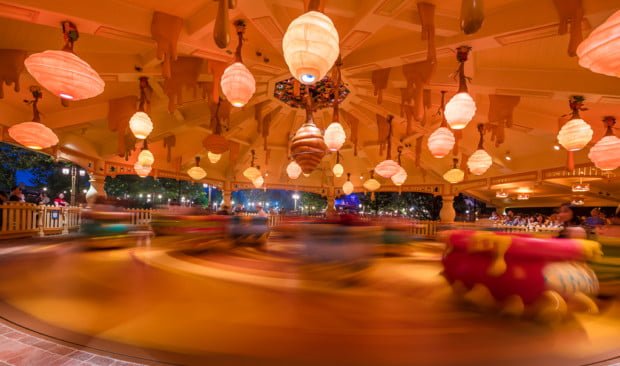 We didn’t have much time to soak up the nighttime ambiance of Shanghai Disneyland, because Ignite the Dream was starting in 45 minutes, so we figured it might be a good time to snag a spot before others started to line up.

It turned out we were a good hour or more late to the party on this, as every prime spot in the Gardens of Imagination was already taken. I rushed around looking for potential “secret” spots while everyone else held down a suitable alternative, to virtually no avail.

Finally, I headed all the way to the front of the park, near what would be Town Square in Mickey Avenue. There, I noticed the strangest thing: hundreds of people, the entire length of Mickey Avenue, were sitting down! I raced back to get Sarah, Molly, and Mark, and we headed there, surprised by this relaxed vibe as compared to the chaos of the Gardens of Imagination. Granted, we wouldn’t be able to see much of the castle projections from here, but the bursts should appear grander. Plus, sitting!

The area was not even remotely crowded, and there was plenty of space for people to spread out, even while sitting. This seeming theme park social contract for sitting during the show filled me with a sense of optimism. Could the path towards a fireworks viewtopia be blazed in Shanghai? It was looking that way!

One thing did worry me, and that was a couple that was standing up about 50 feet in front of us. It sounded like people nearby were talking to them, with my assumption being that the couple was confirming that they’d be sitting during the show. All it would take is one ‘rebel’ to blow this whole thing, but that seemed unlikely given that everyone remained seated after their conversations with the couple. 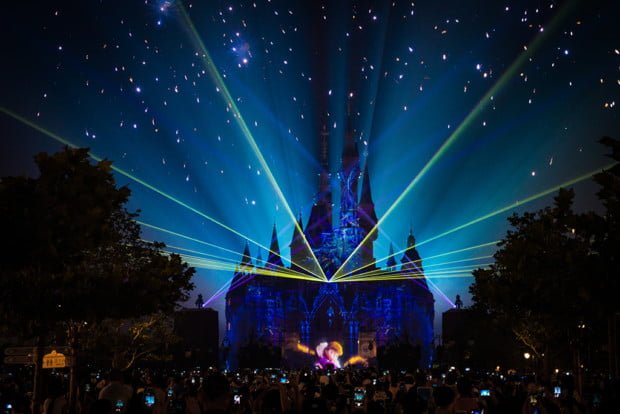 The fireworks started, and the couple remained standing. Within maybe one minute, the entirety of Mickey Avenue went from sitting to standing. With that, we were left with the broken promises and shattered dreams of that fireworks viewtopia that held such hope for a few minutes. I was left scrambling to extend my tripod, although that proved futile since not only was everyone standing, but there was a sea of shoulder kids and guests holding up their phones and iPads as high as possible. Instead, I tried to shoot the show handheld, with minor success.

All day, the overcast sky and mist had been a bummer, but during Ignite the Dream it actually shined. Whatever kind of spotlights were used behind Enchanted Storybook Castle caught the mist, and formed this diffused aura of light behind the castle that was mesmerizing. Mark had an interesting point here: that this might have been a calculated move to use the smog to the show’s advantage. The main show of Ignite the Dreams from this location was pretty stunning, as a result. 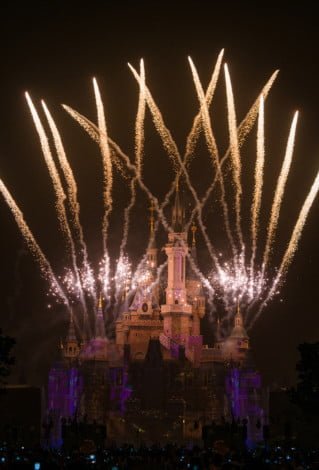 With our travel frequency comes a propensity to treat what we’re doing as work or commonplace, and not give proper weight to our experiences. We are fortunate and incredibly thankful for how much we are able to travel. The opportunities we have are not lost on us. Throughout the entire day, we found ourselves stopping and reflecting on how incredible it was to be at opening day for a new park in mainland China.

It really hit me, though, during the special finale for the Grand Opening. (Note: this same finale, minus the fireworks, also ran the second and third nights of our visit. I’m not sure if it’s a permanent post-show, or if not, how long they consider the “Grand Opening” to be. If you plan to attend in the first year, you might want to play it safe and not want to watch that video.)

For me, the Grand Opening finale was nothing short of hauntingly beautiful. The score, the imagery projected onto Enchanted Storybook Castle, and the gentle bursts were incredibly emotive. As I stood there, I couldn’t help but tearing up watching, and thinking about being so fortunate to experience it firsthand with Sarah.

I put my camera down until the very end, thinking this was the only night that special finale would run, and wanting the experience burned into my memory. This was far and away the highlight of opening day at Shanghai Disneyland for us, and I remarked to Sarah at this point (the most stirring moment, I think) that this alone justified our decision to attend. She agreed. 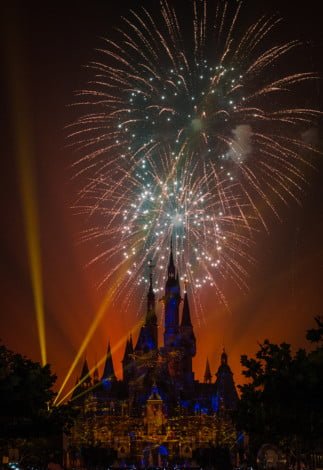 It was the perfect way to end opening day in Shanghai Disneyland, and for most guests, it did signal the end of the day. Like fish swimming upstream, rather than heading towards the exit, we raced towards Adventure Isle, contemplating a quick ride on Roaring or Soaring to knock those out. Roaring was closed and (I think) Soaring had a long wait.

Instead, I opted to start taking photos. While doing so, I noticed that IAAPA (International Association of Amusement Parks and Attractions) was having an evening reception in the park, with Pirates closed to everyone but IAAPA guests. 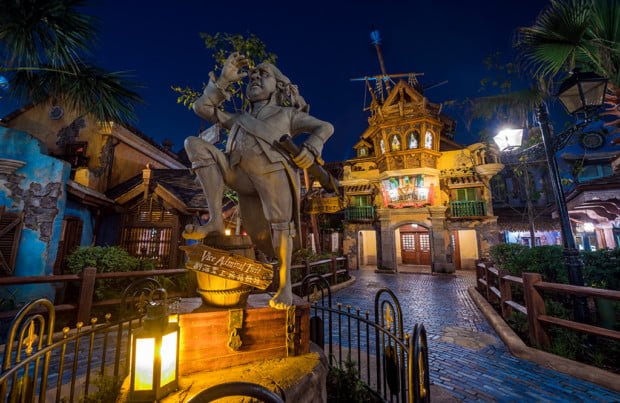 IAAPA had a 5,000 member conference in Shanghai that coincided with opening day. We noticed a lot of IAAPA members that evening, as well as the next day. Although they probably didn’t have much say in the matter, it was interesting that Disney was essentially putting its opening day product out there for professional critique. 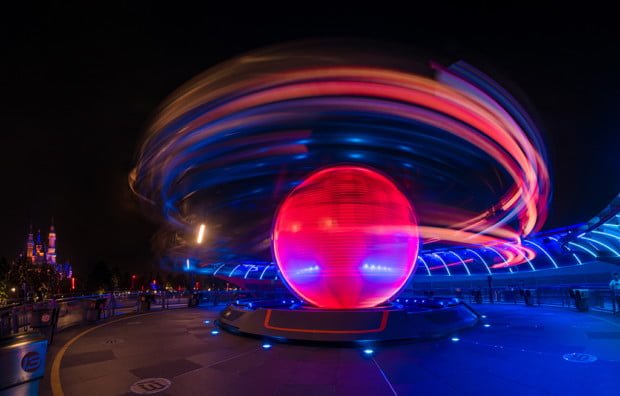 At some point Sarah was getting tired, so she headed back and left me by myself to take photos. I wound up in Tomorrowland, enamored with its color-changing lights, racing Lightcycles, and water. As I stood there, I also found the background music growing on me. (There’s supposedly 4 hours of background music in Tomorrowland–and I’m betting there are separate day and night loops based on what I heard over the course of the trip.)

I had virtually unlimited time in Tomorrowland, as security didn’t approach me at any point. Against my better judgment, I opted not to sleep on a park bench under the warm glow of the neon, and instead headed towards the front of the park.

There were still plenty of guests in the Gardens of Imagination and on Mickey Avenue, trying to snap last minute selfies and finish shopping. As is standard with Disney, the shops on Mickey Avenue seemed to be open an hour (or so) after park closing. 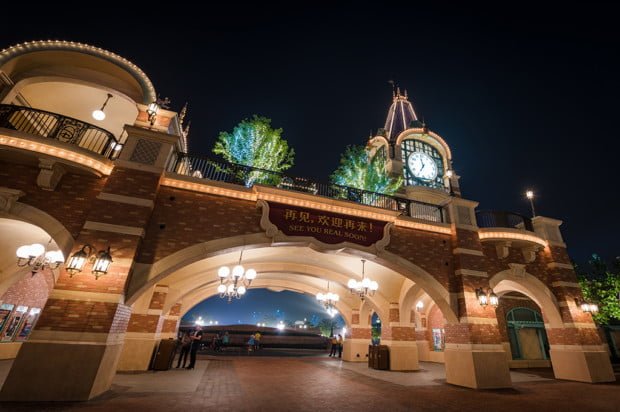 I ran into Mark on Mickey Avenue, and we lingered for a while longer until all of the shoppers and selfie’rs left. Based on observing how they interacted (or didn’t) with guests who were sitting on benches, it seemed like security didn’t really know what to do about the stranglers.

It was as if they had been trained to clear the park by moving forward and not allowing guests past them, but not on how to “encourage” guests to leave. We joked that we probably could’ve stayed all night, but that would have been poor form. Instead, we left moments behind the last of the shoppers. 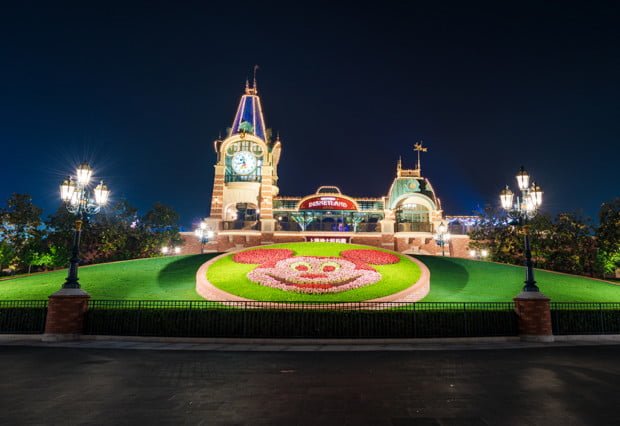 If you enjoyed this first installment of our Shanghai Disneyland Trip Report, we would greatly appreciate it if you’d share it via social media. A lot of effort goes into trip report posts (surprising given their quality—but true! 😉 ), and like all people who put their lives out there on the internet, we have a need to feel loved. Consider sharing this post your act of charity for the day.

What do you think of Shanghai Disneyland thus far? What are your thoughts on Enchanted Storybook Castle? Any attractions you’d like cloned in the U.S. parks? Any questions that we haven’t answered yet? We love hearing from readers, so please share any other thoughts or questions you have, in the comments!