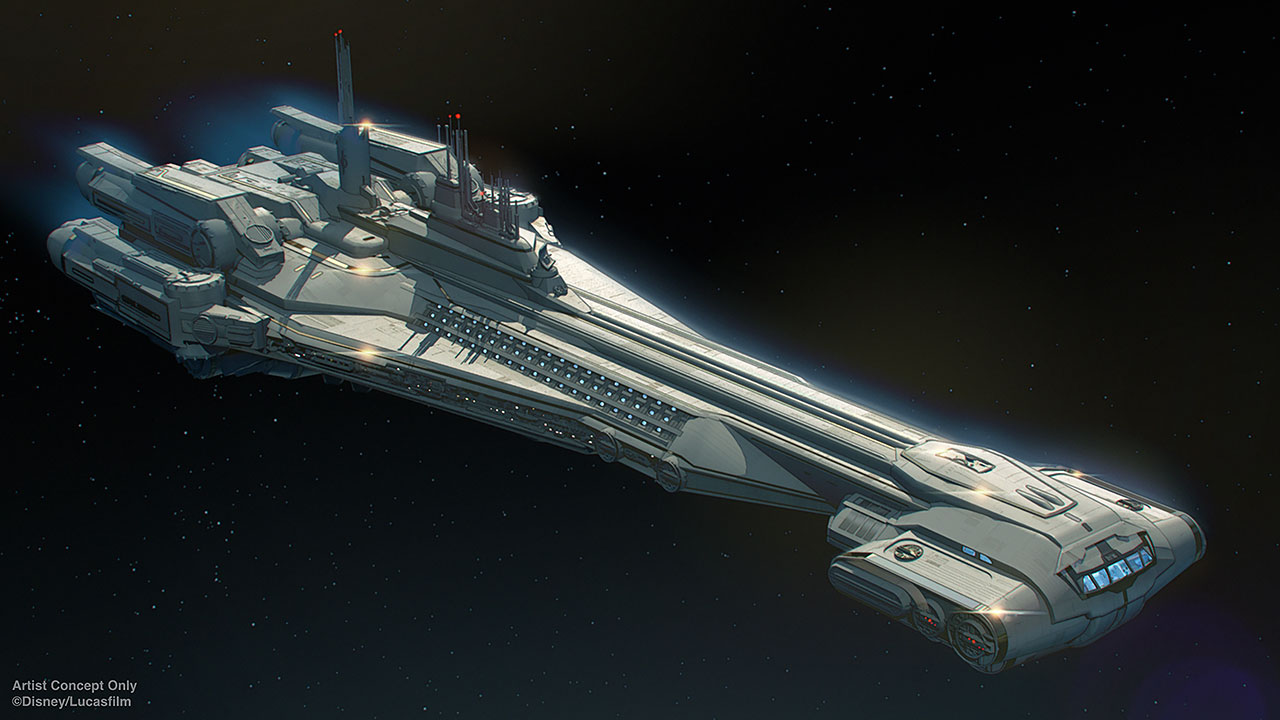 In August 2019, Disney revealed that this new hotel would be called Star Wars: Galactic Starcruiser. Disney additionally revealed that this will be a two-night adventure aboard a glamorous starship. Once onboard the starcruiser (called the Halcyon), guests will interact with characters and become active participants in stories that unfold around them on their galactic journey.

At the last D23 Expo, Chairman of Walt Disney Parks & Resorts, Bob Chapek, confirmed that the Star Wars: Galactic Starcruiser Resort will debut as part of the new Disney 360 vacation concept. This new vacation concept will be a living adventure that allows guests to be active participants in an entirely new form of Disney storytelling.

Last May, Disney took this a step further, confirming that the hotel is currently under development on the south side of Disney’s Hollywood Studios, just east of World Drive. Following that, land was cleared for the new hotel, but not much substantive work occurred last year. In 2019, we finally started seeing visible progress, with underground infrastructure work occurring in a pit at the construction site. Still, the project is quite far from going vertical, and several years away from opening. 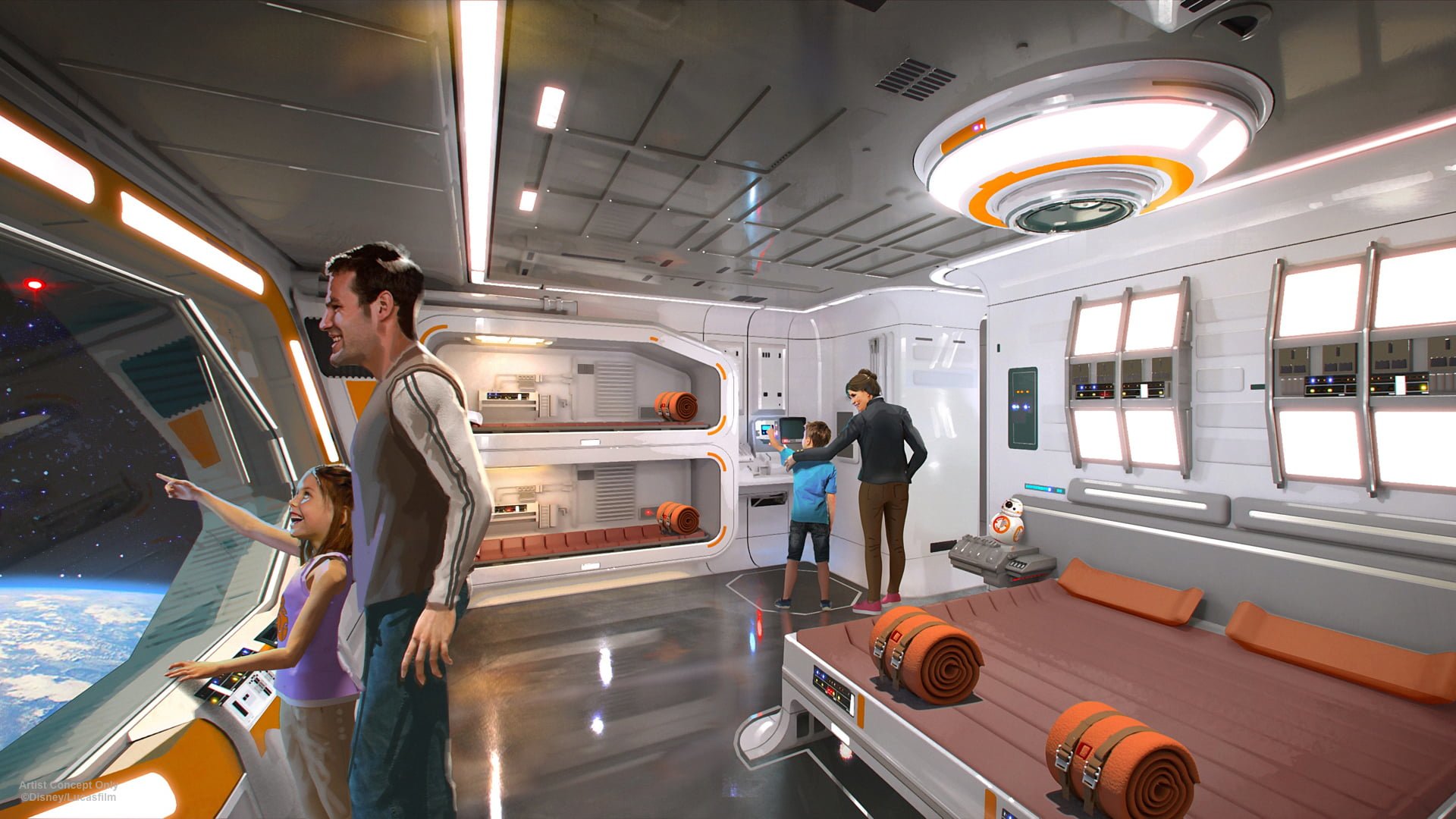 In the original Star Wars Hotel’s original announcement, Bob Chapek shared that “from the second you arrive, you will become a part of a Star Wars story! You’ll immediately become a citizen of the galaxy and experience all that entails, including dressing up in the proper attire. Once you leave Earth, you will discover a starship alive with characters, stories, and adventures that unfold all around you. It is 100% immersive, and the story will touch every single minute of your day, and it will culminate in a unique journey for every person who visits.”

It’s a fascinating idea, one that sounds like a hybrid of a live action role playing game–something Disneyland previously tested (to a totally different extent) with Legends of Frontierland–and the all-inclusive resort hands-on ‘enrichment through entertainment’ experience of the Disney Institute.

While both Legends of Frontierland and the Disney Institute were ahead of their time pushing unique concepts, both of them were (arguably) failures. (There’s a decent chance you’ve never heard of either.) Legends of Frontierland only lasted a summer at Disneyland, and the Disney Institute is now Saratoga Springs (with a name that endures as some sort of corporate training program).

Presumably, this Star Wars Hotel will not suffer a similar fate… 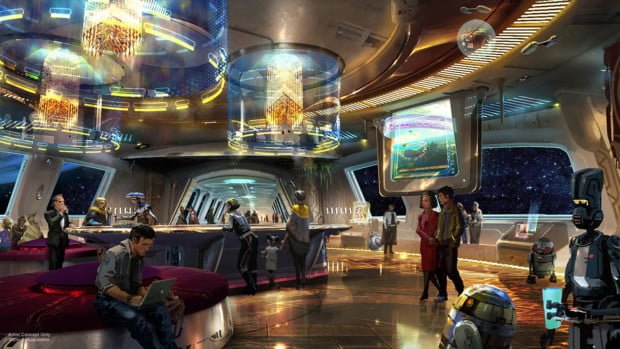 There are still a lot of unknowns and unconfirmed details about the Star Wars Resort. Even with all of that, this is a game-changer, plain and simple. It’s a revolutionary concept, and one that will likely be highly lucrative for Walt Disney World if they can pull off the concept. It’s probably not for me, but not everything at Walt Disney World is. I can still sit in the corner and politely clap at what I think is an idea with a ton of potential.

Per the previous rumor, which was based upon extensive questionnaires that Disney had sent out, the Star Wars resort experience at Walt Disney World would entail guests being immersed in a 2-day story set in the the Star Wars universe and taking place both at their resort and within Star Wars Land.

Since this was announced, I’ve seen a few people “report” on pricing at the Star Wars Resort. I would take all of these numbers with a huge grain of salt. Walt Disney World has yet to settle on 2019 hotel pricing for its standard resorts–there is no way there is concrete pricing for a resort that has not even started construction yet.

Yes, this is going to be an incredibly expensive resort. It’s rumored to be an all-inclusive resort experience, with per person pricing. It wouldn’t surprise me if it’s like Disney Cruise Line with pricing based upon double occupancy and each additional guest in a room costing more (but not quite as much) after that.

However, in terms of actual pricing? No one knows yet. With things like this, so much depends upon actual operational costs, what the actual capex outlay ends up being for the resort, and even things like the economy. (If things are still booming when this opens, expect higher prices.)

No matter whether the price is $600 per person or $2,000 (or more!), there will be a loud chorus of “TAKE MY MONEY, DISNEY.” How loud that chorus is all depends on the final number. With a presumably low capacity for such a personalized experience–and a huge fan base for Star Wars–it might be the case that demand always outstrips supply.

This is sort of what we have seen with limited capacity events Disney has done in the past. It does not matter if something is an objectively good value if there’s enough scarcity and enough fans with a surplus of disposable income. That could be the case here. 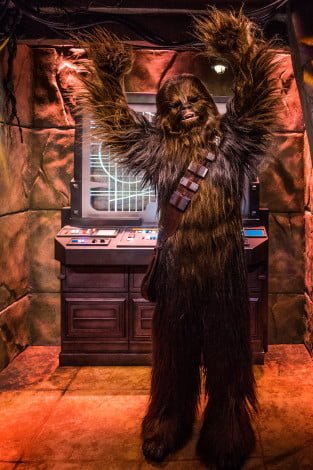 The big question is when will this open? Unless there’s a literal starship hotel being built off-site that will be flown in come 2019 when Star Wars Land opens, construction for this hotel has yet to begin. It would appear that permits have not yet been filed, either. (August 2019 Update: construction now has begun and we’re anticipating that Star Wars: Galactic Starcruiser Resort will open in 2021.)

There’s the possibility that the Star Wars Hotel will be taking over an existing property, which would allow it to open sooner rather than later, but that also seems unlikely. More likely is that this has yet to begin, and won’t be open when Star Wars: Galaxy’s Edge debuts in 2019. I wouldn’t be surprised if the target date here is 2021, so it can be bundled as part of the Walt Disney World 50th Anniversary celebration.

Other unknowns include whether the Star Wars: Galactic Starcruiser Resort will also be built at some point at Disneyland Resort. While it was not announced at D23 Expo, the concept has been on the table for Disneyland as well. The hotel dynamic and resort operations in California are a bit different, and current delays with Anaheim City Council in moving projects forward could be what caused the delay in announcement there. Or, it could be entirely off the table.

Irrespective of the details, the fact that Walt Disney World is going to build the Star Wars: Galactic Starcruiser Resort as an immersive, storytelling boutique hotel is a bold and laudable move. It’s the kind of envelope-pushing experience for which Disney was once known–and seems to be returning to. To my knowledge, nothing has ever been done like this anywhere, and this is a revolutionary concept. While the Star Wars Hotel is almost certainly going to price us out, it’s still a really cool idea, and I’m excited that Disney is moving forward on it. I wouldn’t go as far as to call it risky given the crazy demand for all things Star Wars, it’s certainly an ambitious concept, and far more applause-worthy than Walt Disney World just re-theming some existing hotel rooms by throwing some Ewok-fur comforters on the beds, a BB-8 lamp in the corner, and calling it a day.

What do you think about the addition of a boutique Star Wars: Galactic Starcruiser Resort to Walt Disney World? Does this make you want to yell “TAKE MY MONEY!!1!” to Disney, or would it not appeal to you at the potentially high price points? Would you prefer an immersive “Disney 360” experience, or would you prefer a more conventional hotel stay? Let’s hear some of your thoughts about this news in the comments below!