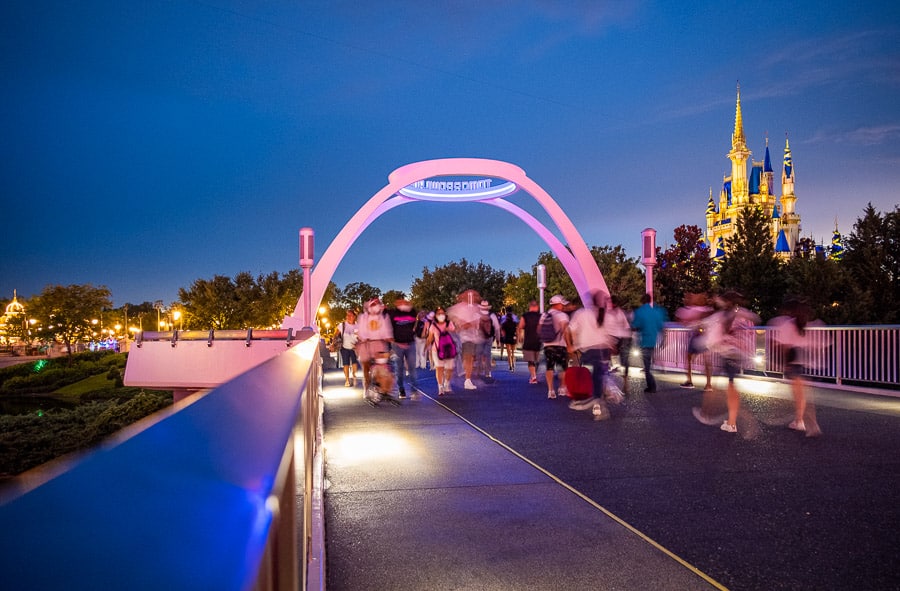 With the arrival of August 2022, we’re nearing the end of summer season and the official start of Halloween at Walt Disney World. This wait times report covers ride & daily data for last month at Magic Kingdom, EPCOT, Hollywood Studios, and Animal Kingdom, while also offering commentary about attraction efficiency and predictions for the off-season.

By way of recap, summer crowds followed a familiar pattern–at least in June as wait times increased gradually over the course of the month. Our expectation heading into summer was that Independence Day would be the peak of the season, with crowd levels gradually trending downward in the following weeks.

As it turned out, Fourth of July marked the slowest stretch of the summer season. Crowds rose in the week after that, before more or less plateauing mid-month. Here’s a look at what happened in late July and the first couple days of August as schools in the South have started going back into session…

As always, all graphs and wait time stats are courtesy of Thrill-Data.com:

We’ll start with the monthly numbers for Walt Disney World as a whole. (The last bar is August 2022, which is only two days old at this point, so not exactly indicative of anything.)

Last month started slow, exactly on par with May. After that, wait times increased slightly, but not to a significant degree. The numbers ended up splitting the difference between the prior two months–3 minutes higher than May and 3 minutes lower than June.

With the week by week view, we can see that wait times increased during the two weeks after Independence Day, but then began receding. That probably overstates the differences over the course of the last month–all of these weeks since the Fourth of July have average waits of 40-42 minutes.

Now that schools are starting to go back into session, it’s likely these numbers will drop even further. It’ll be interesting to see whether Walt Disney World is back to May levels by this week or next.

Individual days illustrate mostly the same, but with more bars.

The most interesting aspect of these wait times is the spike July 25-28, followed by a sharp slowdown the final three days of the month. Crowd levels went from 8/10 on July 25 to 3/10 on July 31.

For park by park analysis, we’ll start with Magic Kingdom. The same trend is even more pronounced at WDW’s flagship park, going from crowd levels of 9/10 early last week to 3/10 on Friday and Saturday, and 4/10 on Sunday.

If I were looking for a narrative to explain this, it would be a “last hurrah” during the week for those taking summer vacation during the waning days of school breaks, before heading home and getting ready over the weekend. I don’t know whether this actually is the best explanation, but it’s what comes to mind. 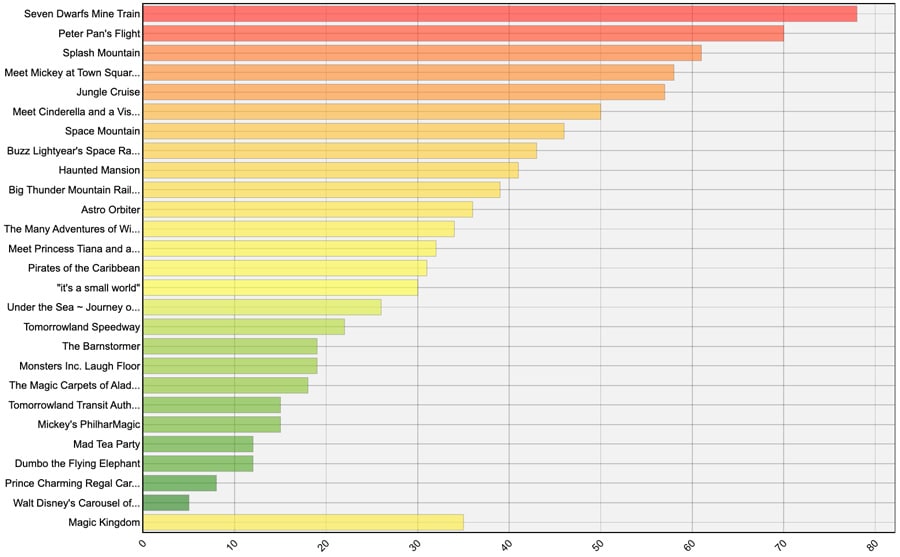 Here are the specific ride averages for Magic Kingdom:

Most notably, Jungle Cruise continues to fall in the rankings. 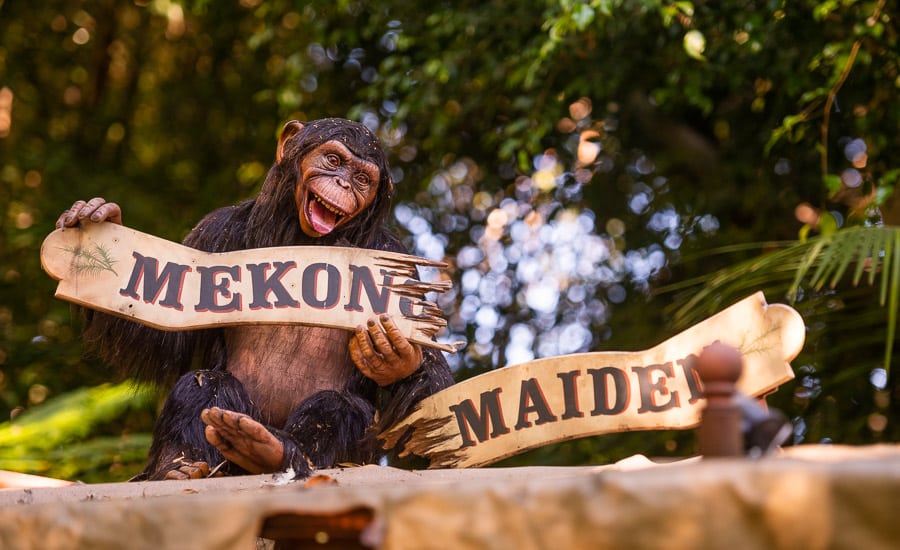 The spike in Jungle Cruise’s popularity has been a popular topic in the comments of other posts, and this is one we’ve been watching closely. There are a few explanations for this, including the reimagining last year and film featuring national treasure, the Rock. It would not be the least bit surprising if longtime, annual visitors are more inclined to revisit Jungle Cruise to see what has changed. It’s also possible the movie rekindled curiosity and/or first-timers are expecting a tie-in.

Don’t get me wrong, I love what Disney did with the Jungle Cruise additions. Betting big on monkey madness was an objectively good decision. You do Pirates of the Caribbean first, and then walk next door to Jungle Cruise, which has twice as long of a posted wait time. The only logical conclusion is that it has twice as many Dwayne Johnson Audio Animatronics as PotC has Johnny Depp (or at least one really big “Rock Robot”). Instead, you’re greeted by a plethora of primates and a bunch of puns. 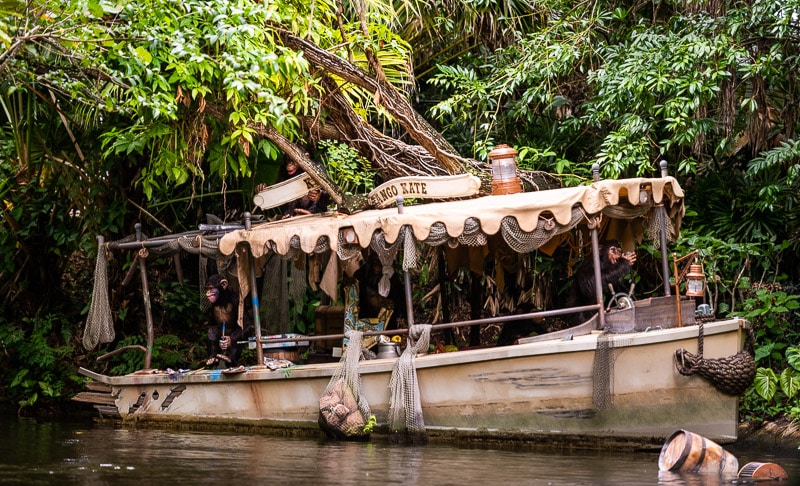 Another possibility is attraction efficiency, or lack thereof. Len Testa recently shared work by TouringPlans‘ researchers suggesting that Jungle Cruise was operating way below its theoretical hourly ride capacity. I talked to Len about this, and he said there was some conflicting info from skippers–but the conflict is seemingly one of degree. Regardless of that, I think the observation probably stands–Jungle Cruise is not operating at or even close to 100%.

Now, don’t go putting on the tin foil hat and speculating about the same thing happening with all other attractions just yet. While it’s possible that Walt Disney World is purposefully reducing efficiency to increase wait times and push people towards buying the Genie+ service, it’s worth noting that Jungle Cruise is at least somewhat unique.

Jungle Cruise is a labor-intensive attraction due to the skippers and the slower loading process. A shortage of skippers or newer Cast Members who aren’t as adept at quickly loading boats could both result in fewer guests riding the attraction per hour. The latter part is true at other attractions–newer Cast Members don’t dispatch ride vehicles as quickly, thereby lowering operational efficiency–but not the former. 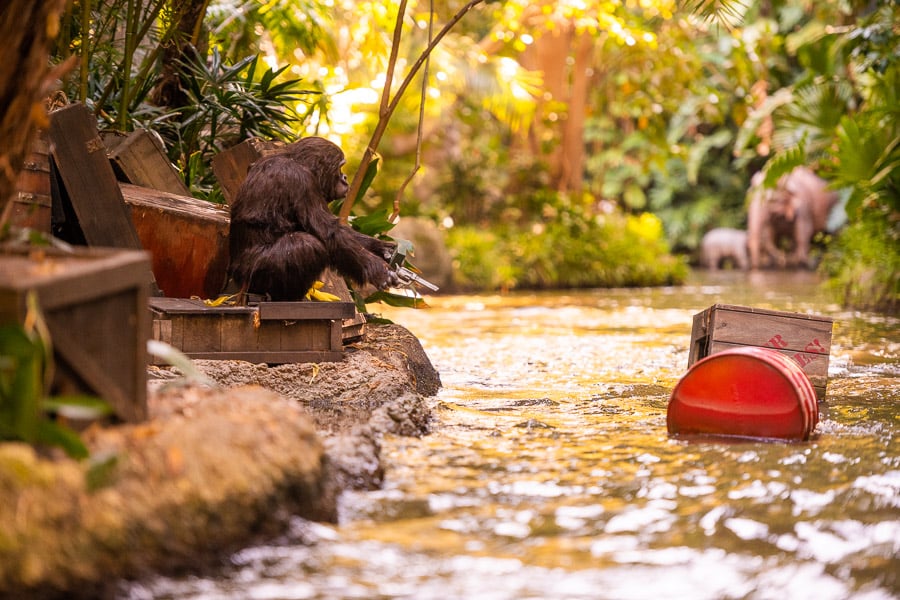 In other words, other attractions could be experiencing this same phenomenon, albeit not to this degree. It would be less a deliberate decision by management and more a result of fewer seasoned Cast Members. (Walt Disney World definitely is not intentionally short-staffed–that would be the equivalent of dodging dollars to pick up pennies.)

Oh, and it’s also a near-certainty that wait times at Jungle Cruise are being inflated, but that’s true across the board and has been for a while. There’s no reason for us to believe that Jungle Cruise is any better or worse on this front, but the gap between posted and actual wait times does seem to be larger than normal right now. Whether this is intentional to push Genie+ or a result of less predictability due to the myriad operational challenges is likely in the eye of the beholder.

(My “consistently cynical” take is that it is not nefarious. Walt Disney World has a lot of problems stemming from shortages, insufficient resources, and employee turnover. While certain root causes are self-inflicted, the negative guest-facing outcomes are largely not by design. See also Hanlon’s Razor.)

We spent a lot of time analyzing Jungle Cruise wait times, but the “good” news is that we can mostly breeze through the rest of this. Nothing else from the wait time data is nearly as interesting.

Animal Kingdom follows the same pattern as Magic Kingdom in the last week-plus. 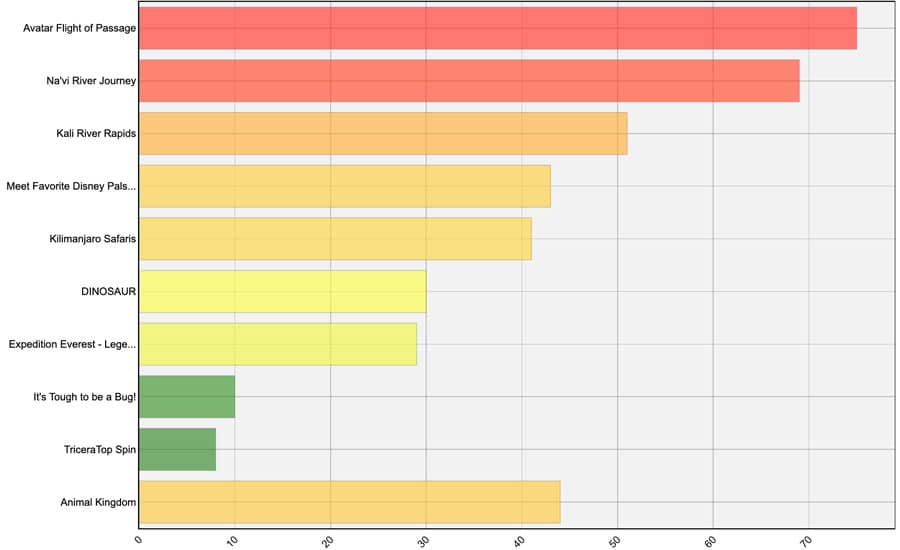 Here are the attraction averages for Animal Kingdom:

It’ll be downright hilarious if Walt Disney World actually goes ahead and moves Expedition Everest back to Individual Lightning Lane status. It’s the 7th most popular attraction in a park with very few attractions!

Most of these lows are occurring Fridays through Sundays, which makes sense. EPCOT is the locals’ park, and Floridians are more likely to visit for festivals and atmosphere than rides. Locals are also more likely than tourists to cancel park plans at the last minute if the weather is bad–and it has been a hot and rainy month. Nevertheless, 2/10 for a Sunday during the summer of Cosmic Rewind’s launch and Food & Wine Festival is not exactly a great showing for EPCOT. 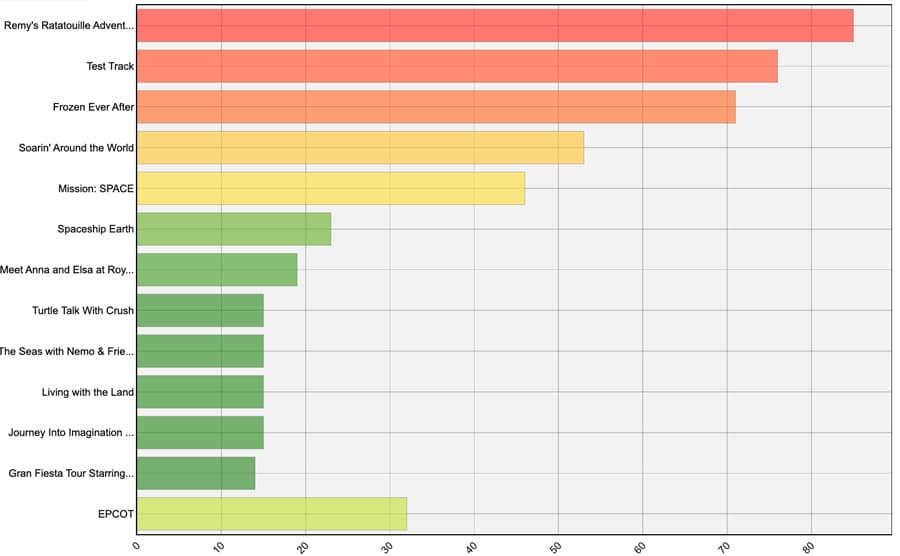 Here are individual attraction wait times at EPCOT this month:

These times for headliners at EPCOT are actually up. However, the supporting player attractions are almost all at 15 minutes (and walk-ons for much of the day, in actuality), which really drags down the average.

Once again, the most consistent park. After a busy start to last week, wait times have receded at DHS. As has been the case for the last several months, Disney’s Hollywood Studios is manageable if you arrive early, stay late, and avoid popular attractions during the middle of the day. 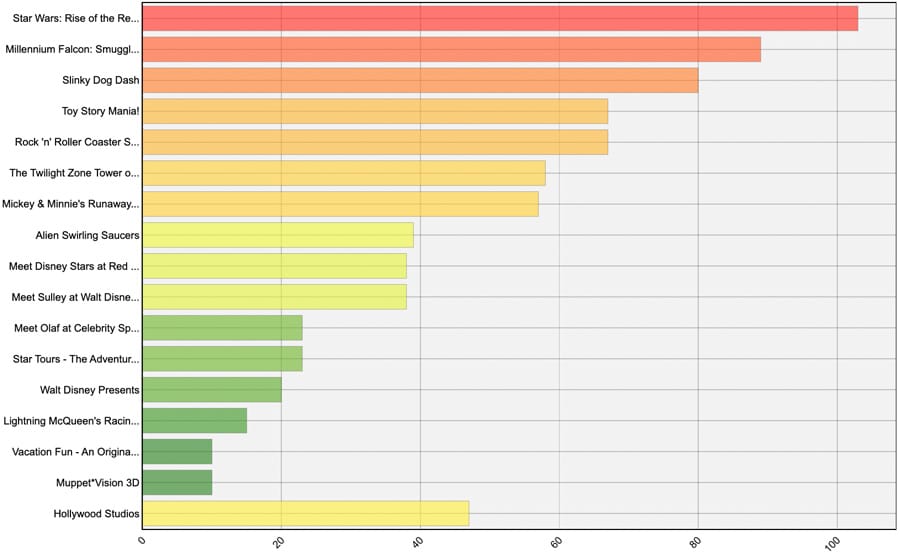 Here are ride-by-ride wait times for Disney’s Hollywood Studios for the month:

The Twilight Zone Tower of Terror’s average is still around half what it previously was, down from over 100 minutes to under an hour. At present, it’s again operating at full capacity, with one side of the refurbishment that took the ride down to half-capacity finished. It’s unclear when work on the other side will begin, but our hope is that it doesn’t start until the off-season.

(This is a good illustration of how a reduction in ride capacity impacts wait times. Obviously, the underlying reason for Tower of Terror’s up-and-down wait times differs from Jungle Cruise, but the end result is similar.)

For the sake of comparison, here’s a high-level look at the weekly wait time averages for Universal Orlando.

The general trend of Universal Orlando’s crowd levels in the last month track with those of Walt Disney World. The big difference is that there was a bit of a bump towards the end of July before the August slowdown started. 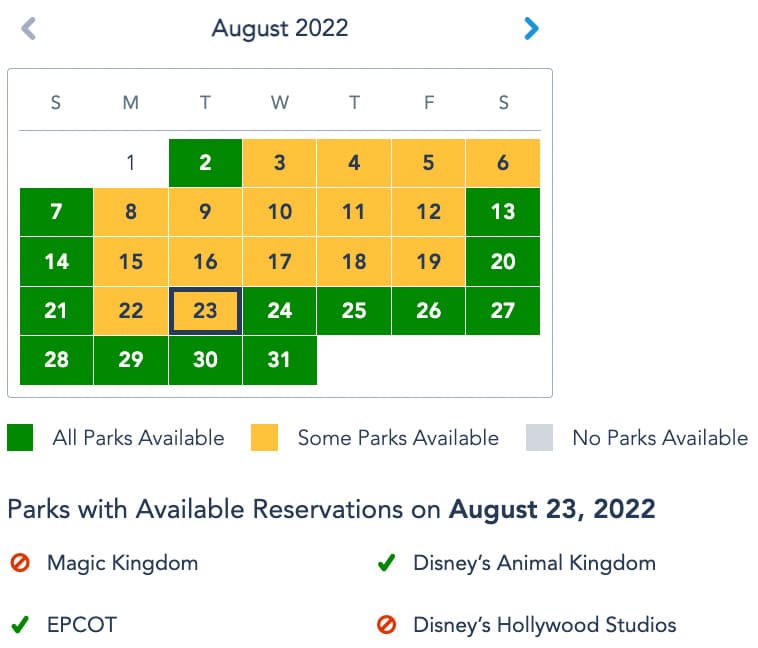 There’s a lot more yellow on the Disney Park Pass calendar since last week’s post: No, These Dates Won’t Be Busy at Walt Disney World. That’s worth reading for some theories as to why reservations filled up first for Mickey’s Not So Scary Halloween Party. In a nutshell, it’s more of the same–manipulating attendance and allocating resources (staffing).

It’s especially interesting that weekends are not filling up as quickly as weekdays, despite Saturday and Sunday being historically busier during the early fall off-season. To us, this suggests that Walt Disney World is scheduling more Cast Members on the weekends, thereby increasing attendance caps to levels exceeding organic demand. (Just a working theory–could be wrong.)

Aside from attractions like the aforementioned Jungle Cruise, staffing woes have a disproportionate impact on dining. While it does impact operational efficiency at other attractions (see above), that may not be enough to register in wait time data. However, you could wait longer for your Mobile Order to be ready and fewer registers might be open in gift shops or EPCOT festival booths, etc. All of that impacts the guest experience, but would not be evident from the wait time data in crowd reports like this. (Again, just a working theory that could be wrong– 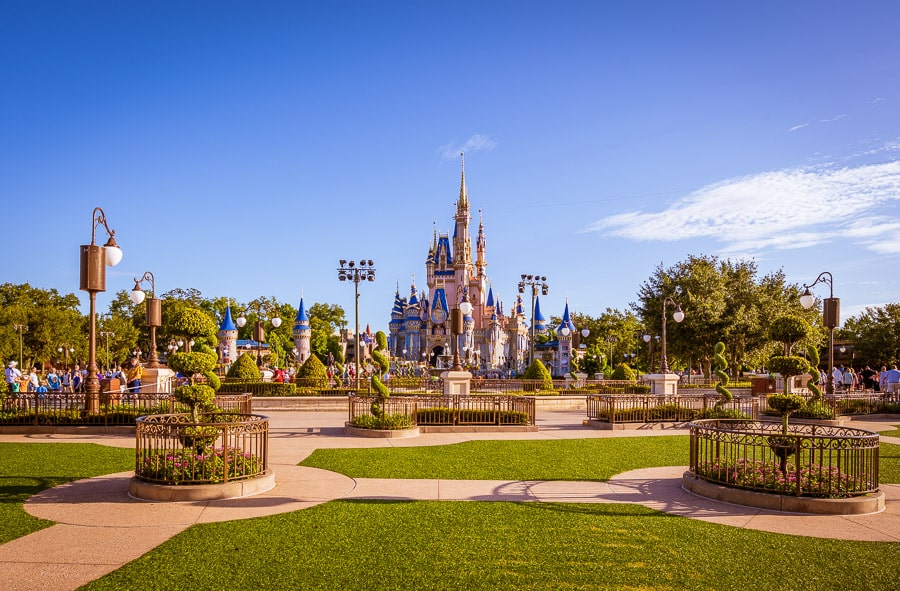 Ultimately, it’ll be interesting to see what happens in the next couple of weeks with crowds at Walt Disney World. Southern school districts have already started going back into session; several major ones including Atlanta and the Gulf Coast had their first days on August 1 (more return on August 4). In Central Florida, both Osceola and Orange County schools go back into session on August 10.

Consequently, our expectation is that this week continues to slow, with an even more pronounced drop-off next week. The following week should see an even sharper drop, heralding the unofficial start of the fall off-season at Walt Disney World. That should be good enough for average wait times in the 33 to 35 minute neighborhood, or around 4/10 on the crowd calendar. That would be about on par with the lows of this May and the highs of last August.

We’ll see whether the degree to which those predictions end up being accurate, or if Walt Disney World crowds and wait times throw us another curveball. We’ll continue monitoring crowds and report back in mid-August after the first couple Mickey’s Not So Scary Halloween Party nights.

Thoughts on late summer crowds at Walt Disney World? What about attraction inefficiencies like those described at Jungle Cruise? Predictions for the rest of the month or fall off-season? Think the theory about the Park Pass calendar being used to redistribute crowds across all four parks makes sense? If you’ve visited within the last month, what did you think of crowds? What about posted v. actual wait times? Do you agree or disagree with anything in our report? Any questions we can help you answer? Hearing your feedback–even when you disagree with us–is both interesting to us and helpful to other readers, so please share your thoughts below in the comments!

26 Responses to “Summer Crowds Start to Slow at Disney World”