Theme-wise, Taste Pilots’ Grill is designed to look like a 1950s hanger that has since been taken over by a younger group of hip aviators (you can read more about Imagineering’s backstory for Condor Flats here). As is the case with the rest of Condor Flats, some of this “hip” layer has been removed as part of the Disney California Adventure overhaul. The restaurant nails the theme pretty well in that it does look like an old hanger, with some little details and authentic photos highlighting the history of aviation. Even with all of that, it’s not great, but it’s good. In fairness, it’s tough to achieve both authenticity (which would amount to it being simply a restaurant in an empty warehouse-like building) and significant detail-work. Condor Flats is one of my favorite lands, and I think it has so much unrealized potential, which describes how I feel about Taste Pilots’ Grill’s theming. There are some scattered details around the restaurant, but I’d still love to see more. There’s seating both inside and outside at Taste Pilots’ Grill; we normally eat outside since it’s usually busy and chaotic inside. Outside offers pretty views into the rest of Condor Flats and of Carthay Circle Theatre.

Unfortunately, Taste Pilots’ Grill has been the rare example of a recent decline in dining at Disneyland Resort. While most other restaurants are on the upswing, Taste Pilots’ Grill is a shadow of its former self. And I don’t mean because that plane in the first photo is no longer on the facade. Unlike most Disneyland restaurants that have been receiving new and improved menus over the last couple of years, it seems that each change at Taste Pilots’ Grill is a change for the worse. First, the Full Throttle Fries disappeared. Then, the Aviator’s Chicken Sandwich was removed from the menu. Finally, the X-3 and X-5 Rocket Ribs got the boot. Here’s a look at the menu in all of its former glory. 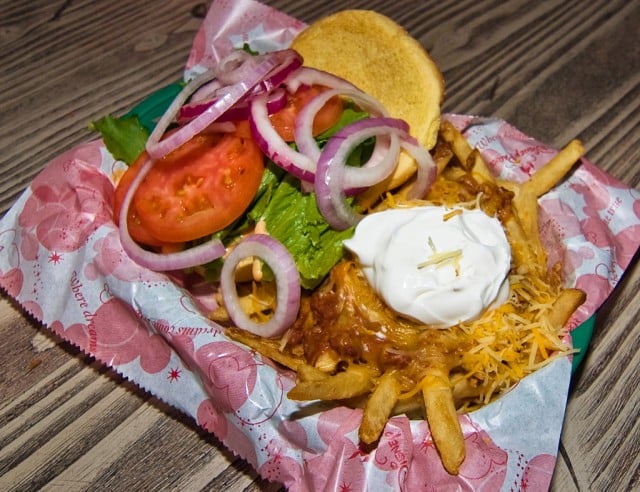 Sure, a meal from the old menu probably contained 3,502% of your daily saturated fat, but when you’re on vacation, who cares?! Along the way, all of the aviation-inspired names were also replaced with standard names. Perhaps guests were confused when their burger wasn’t part jet and the restaurant received complaints? Whatever the case, Taste Pilots’ Grill is a shadow of its former self. This has caused outrage among fans, as Taste Pilots’ really used to be a great “guilty pleasure” restaurant. Now, it’s the standard, stereotypical theme park fare.

There are really only two exceptions to this: the Chili Burger and the Bleu Cheese & Bacon Burger. I’m not a fan of chili burgers, so I gave that one a pass. If you’ve tried it, please leave your thoughts on it in the comments. However, the Bleu Cheese & Bacon Burger combines three of my favorite things: bleu cheese, bacon, and burger. The burger itself was your stereotypical “bad” theme park burger. It looked like it had been cooked a few days ago, reheated in the microwave, and then stuck under a heat lamp. Definitely left something to be desired. 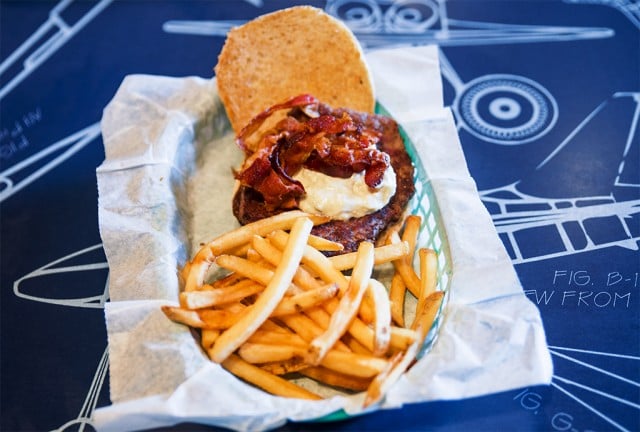 The bleu cheese here was the interesting part of the meal, and I’m not really sure what to make of it. The best way to describe it would be as a bleu cheese “spread.” On the one hand, it tasted good. It and the bacon actually made the burger taste quite good, overall. On the other hand, the bleu cheese was the epitome of “fake food,” as it clearly was bleu cheese flavoring (and some crumbles) in some sort of sour cream base, with other stuff thrown in. It reminded me of the fake eggs Disney serves at counter service restaurants for breakfast. Except in this case, it tasted good! I’d order it again, but I eat enough way-too-healthy food at home that I figure some fake food here and there isn’t going to kill me.

As mentioned above, Taste Pilots’ Grill also has chicken items on it. These are the basic options available, and I generally don’t bother with them. If grilled chicken is your thing, the sandwich or salad (especially given the toppings bar) probably aren’t terrible options, but there are such better choices throughout the park that I can’t imagine trying them. Plus, there’s no way they’ll stack up to the Aviator’s Chicken Sandwich pictured above! 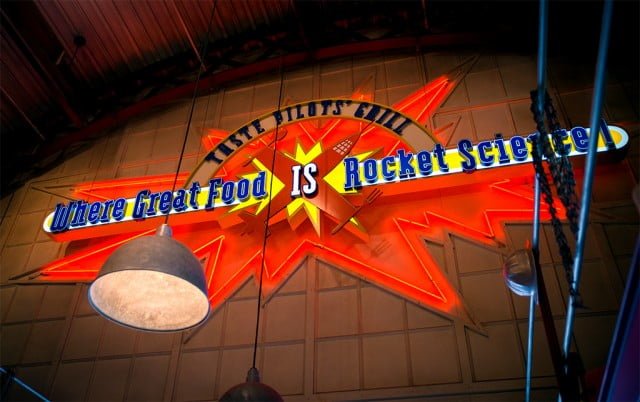 Taste Pilots’ Grill’s saving grace is probably its toppings bar, which can help redeem even the blandest burger. It’s not as large as the bars at Cosmic Ray’s or Pecos Bill in Walt Disney World, but it has the important things, namely, good lettuce, tomatoes, and onions. I wouldn’t eat here for this reason alone, but it does help Taste Pilots’ Grill’s cause just a bit.

Overall, Taste Pilots’ Grill is a dud. Had I written this review in mid-2010 when I first dined there, I would be singing its praises as a great restaurant for unique and unhealthy (yet oh-so delicious) options. Unfortunately, the menu has had most of its best choices since removed. Perhaps this is in part due to Disney’s health initiative, but it’s still disappointing that the unique options have been replaced with largely bland and homogenized choices. Taste Pilots’ Grill does have a pretty interesting theme and its options are okay if you have picky eaters or don’t want to venture far from Soarin’, but in Disney California Adventure, there are now far better counter service options.

Do you like Taste Pilots’ Grill, or do you think it’s sorta “meh”? Do you remember the good ole days of the glorious menu? Share your thoughts in the comments!

To read other Disneyland restaurant reviews, check out our Disney Dining Reviews Index.