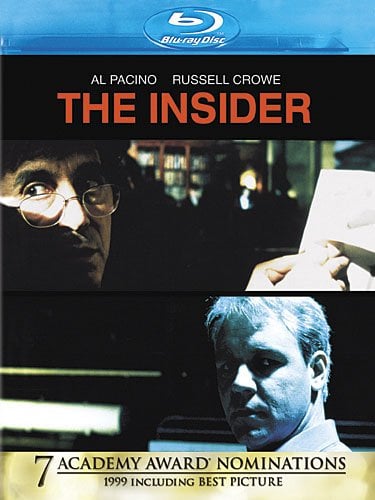 The Insider tells the true story of two men, 60 Minutes producer Lowell Bergman, played by Al Pacino, and former Brown & Williamson R&D man Jeffrey Wigand, played by Russell Crowe. The film details their they work to uncover and bring to light the truth about nicotine’s addictive properties and Big Tobacco’s attempts at a cover-up while its CEOs testify before Congress. The film is adapted from from Marie Brenner’s “The Man Who Knew Too Much” and based on an actual 60 Minutes interview from 1995 with a tobacco industry whistleblower. Wigand and Bergman fight the good fight as just about everyone stands in their way–from those associated with Big Tobacco to CBS executives.

The resulting film is an intense yet almost documentary-like accounting that is an excellent film. The film is provocative and character-driven, and despite the dense subject matter and quiet tone, always keeps the viewer on the edge of their seat.

The video looks great here, with wonderful clarity and cinematic noise retained as intended. Viewers will notice that there are significant shifts in tint and color balance from scene to scene–these are entirely intended and they look great in the Blu-ray release.

Audio is similarly well-done, but The Insider was never intended to be an auditory assault, so don’t expect a ton here. Disney’s DTS-HD Master Audio 5.1 surround track mostly focuses its attention on the front channels, but since the movie is dialogue-driven, this should be expected.

The Insider isn’t exactly a film that will push your home theater system to its limits, but what Disney has done here with the transfer and audio is solid.

Here’s where The Insider Blu-ray is a disappointment: there are only 2 extras. A throw-away production video and a trailer. It’s incredibly disappointing that such a provocative film with real, rich history received such poor treatment in the extras department. I’m sure there could be a two-hour (or more) documentary that would be incredibly interesting, and yet…nothing.

2 Responses to “The Insider Blu-ray Review”