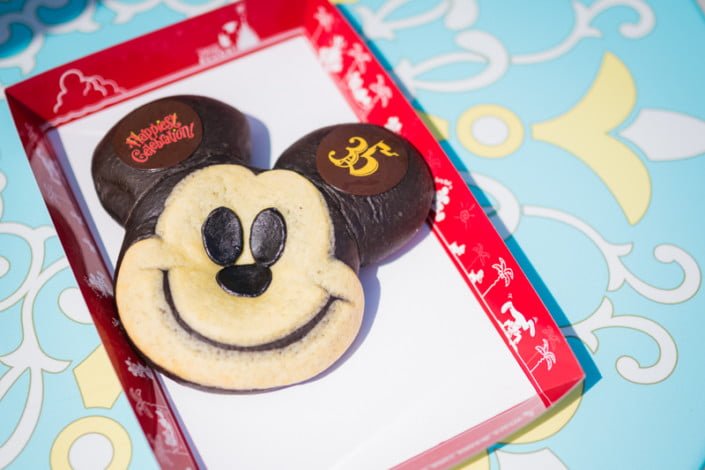 For the 35th Anniversary Happiest Celebration!, restaurants at both Tokyo Disneyland and DisneySea are offering special menus, which will be available from now until March 2019. In this post, we’ll try some of these snacks, and share photos and thoughts about our favorites with you.

Fortunately, there are a lot of new foods to try for Tokyo Disneyland’s 35th Anniversary, and we made excuses to try just about all of them. From Mickey Mouse-shaped bread stuffed with cream cheese to new popcorn to a beef waffle cone and much more, there’s a ton to try.

First up is the Mickey Bread with Cream Cheese & Blueberry Jam, Chocolate, and Strawberry Filling, which is pictured at the top of this post.

Available from Sweetheart Cafe, this has been our unanimous favorite of everything we’ve tried. It sounds so simple–bread with filling, but it’s executed perfectly. The bread is slightly doughy and flavorful, and the filling puts it over the top. A great snack, especially if you’re really hungry or want something to share. 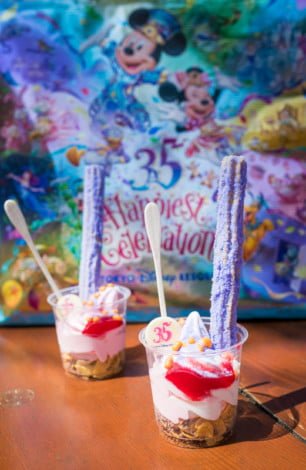 We’ll continue with the second-best item of the Happiest Celebration: the Strawberry Critter Sundae from Rackety’s Raccoon Saloon.

This is always delicious and is always a must-get snack at Tokyo Disneyland. I’ve literally never had a bad version, but this one is even better than normal. Thanks to the added candy and Cotton Candy Churro (!!!), it’s a beautiful mix of berry and sugary flavors. It very well might rot your teeth at an alarming rate, but it’s totally worth it. 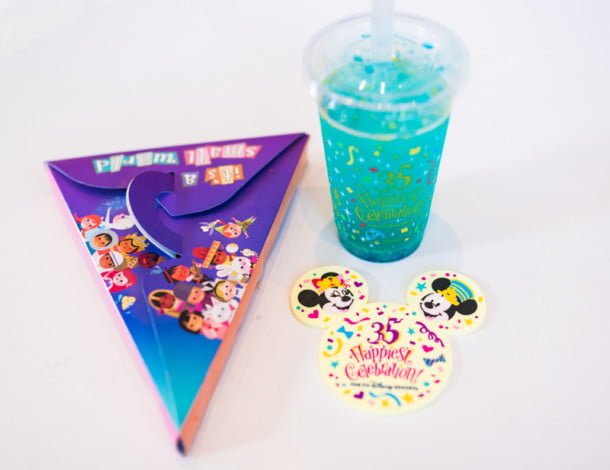 While not technically one of the Tokyo Disneyland 35th Anniversary food items, the new ‘it’s a small world’ Pizza was released at Captain Hook’s Galley on the same day as the rest of this stuff.

Being a mix of meats and cheeses (I guess from around the world…maybe?), this is a fairly normal pizza as compared to their usual special sets here. It’s absolutely delicious, and worth getting as a set with the blue drink, too.

We also bought the souvenir Happiest Celebration drink coaster, and debated getting the ‘it’s a small world’ souvenir lunch bag that you can purchase with this. As with so many Tokyo Disneyland foods, the packaging here was incredibly nice. The only thing that stopped me from packing it to take home was the melted cheese all over mine. 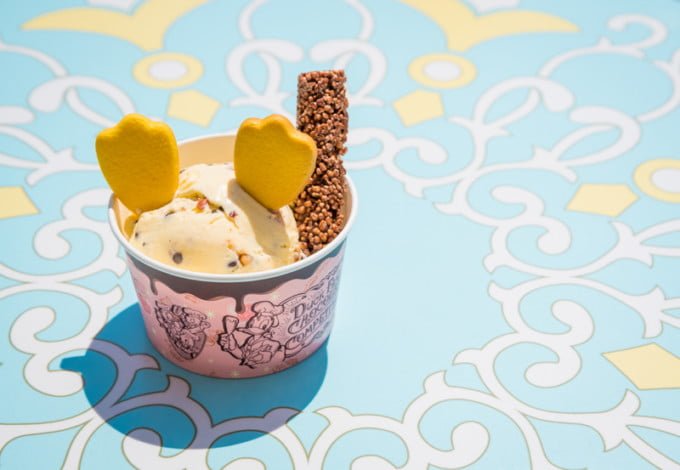 Another quasi-35th item is the “Donald Duck Butt Sundae” at Duck Family Chocolate Competition. This is a new location in World Bazaar selling souvenir tins of chocolate crunch for the Happiest Celebration.

As is the case with all things ice cream, this was delicious. However, I still prefer Strawberry Cheesecake, which is rich and creamy.

Since the Duck Family Chocolate Competition store opened, it has had a huge set of switchbacks, and is probably the longest line in the park. Note that the Duck Family merchandise is also sold in the Emporium, and the desserts are sold at Ice Cream Cones, so no need to wait in that lengthy line unless you want the souvenir tins of chocolate crunch. 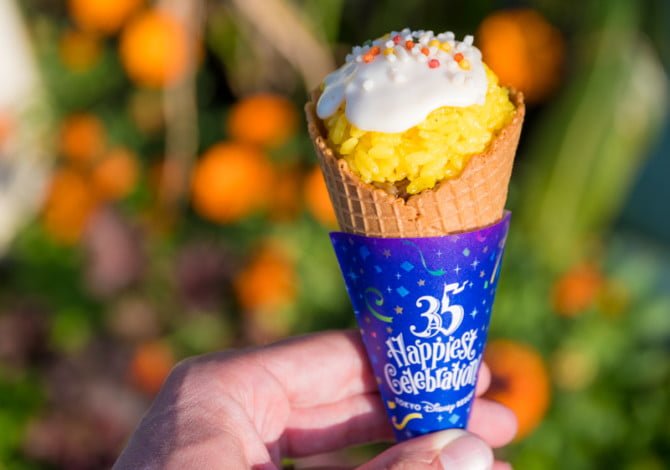 Next up is the Beef and Rice Cone from the Gazebo.

These cones are becoming a special event staple, and are worth trying if only because it’s a bit surreal to eat something savory from a waffle cone–the same one you’d normally associate with ice cream. The beef in here is tender but fatty; overall pretty tasty, but not as good as the beef and mashed potatoes cones they’ve done in the past here. 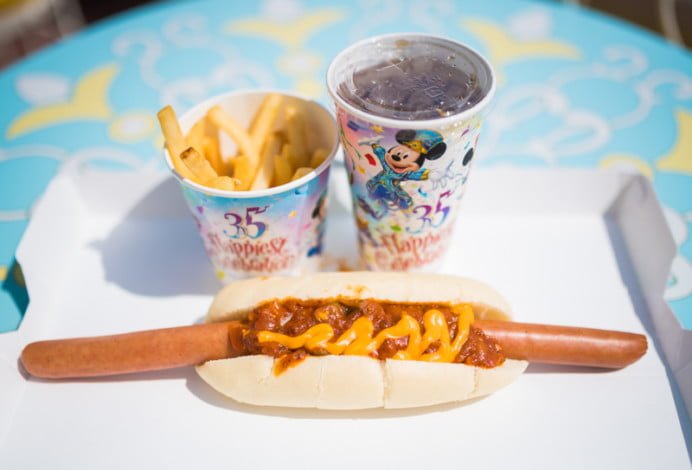 Around the corner from the Gazebo is Refreshment Corner, serving the Footlong Hot Dog.

This is an “is what it is” type of thing. I knew it was a must-get once I saw the cool packaging (yes, I’m such a geek that I’m taking it home). I also like the snap to Tokyo Disney Resort’s hot dogs, so I’m a fan. It’s nothing revolutionary, but it’s a good hot dog. 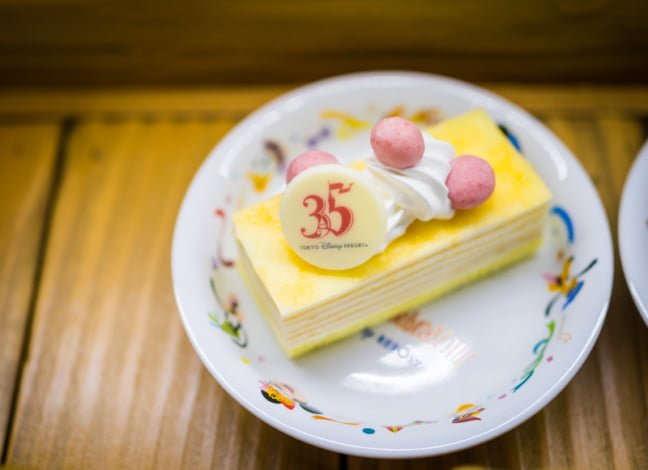 Finally, there are a bunch of other desserts–mostly cakes and mousse–that are on the special menus at Tokyo Disneyland and DisneySea, but that we’ve seen with regularity.

For example, the huge cake at Queen of Hearts Banquet Hall is identical to what has been offered for (at least) the last 5 years, except with a “Happiest Celebration” banner on it now. This is a great cake and we’ll have to taste-test to confirm that it’s the same (even though we know it is), but the line has been too long at Queen of Hearts every time we’ve checked the past few days.

Overall, when you couple the special snacks and menus for Tokyo Disneyland’s 35th Anniversary with the normal items available year-round, there’s more cute deliciousness than one person could hope to eat during a single trip. Snacking has always been one of Tokyo Disney Resort’s strong suits, and they’ve continued that legacy during the Happiest Celebration. Above all else, do not miss the one-two punch of Duck Family Chocolate Competition and Sweetheart Cafe.

If you’ve visited, what are your favorite snacks at Tokyo Disneyland? Anything new for the anniversary that we missed on this list? Snacks you’re looking forward to trying in the parks? Any questions? Hearing feedback about your experiences is both interesting to us and helpful to other readers, so please share your thoughts below in the comments!