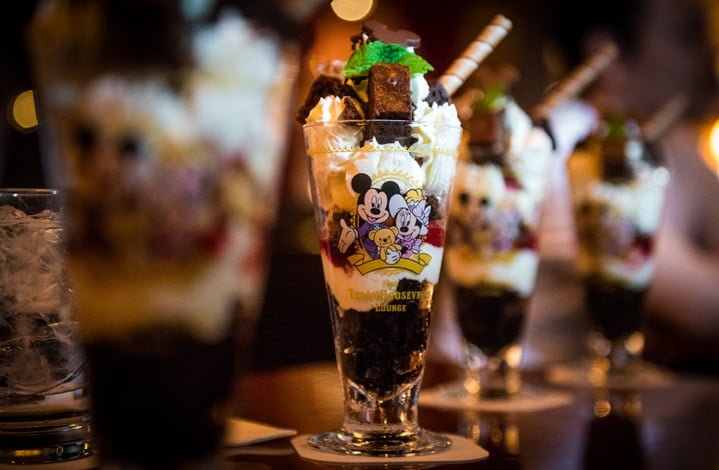 Not only is Tokyo DisneySea the greatest theme park in the world, but it’s also one of the greatest in terms of food and snacks. Beyond the famous popcorn flavors and their prized-after popcorn buckets, Chandu Tails, the Gyoza Dog, Tokyo DisneySea has some incredible lesser-known snacks. In this post, we’ll take a look at some of our favorite snacks in Tokyo DisneySea.

Although many snacks and food options can seem odd to foreigners, many of these snacks are quite normal, and in terms of taste, pretty much all of them would appeal to an ordinary American palate. With that said, we approach food with open minds when traveling, and eat just about anything we come across.

We’ll start out this post with my absolute favorite spot in Tokyo DisneySea, which is Sultan’s Oasis in the Arabian Coast port of call, otherwise known as “Chanduland.” By the way, if you’re looking for snacks in Tokyo Disneyland, check out our Awesome Tokyo Disneyland Snacks post. 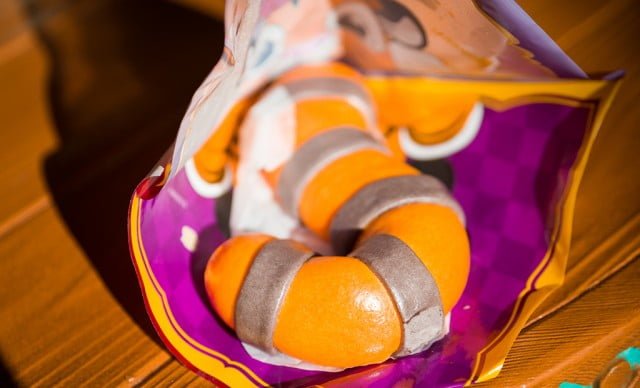 Chandu the Tiger, star of the incredible Sindbad’s Storybook Voyage, is one of the greatest Disney theme park characters ever–so great that he even has a snack (although a slightly morbid one!) named after him.

The Chandu Tail is a tiger tail-shaped steamed chicken cream bun that packs a lot of flavor. Available back at the Sultan’s Oasis (more on this awesome little spot later!), these are a must eat. 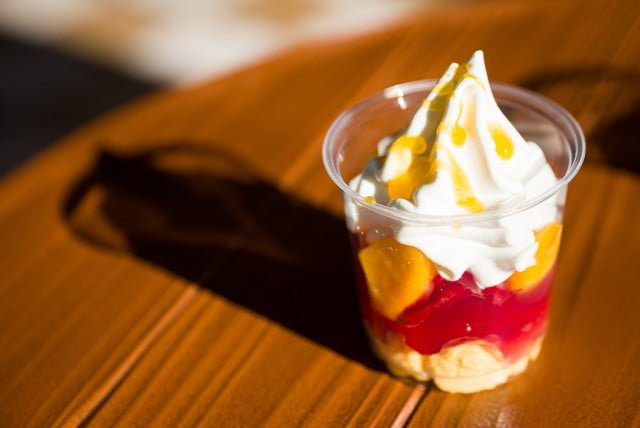 Another gem from Sultan’s Oasis is the “Sultan’s Sandae.” I’m not entirely sure what was in this, but I’m thinking it was coconut ice cream with mango chunks, red jelly topping, and pineapple syrup.

Whatever the ingredients, the flavors combined for what was essentially a “tropical punch” ice cream sundae. This snack is an absolute must-do. 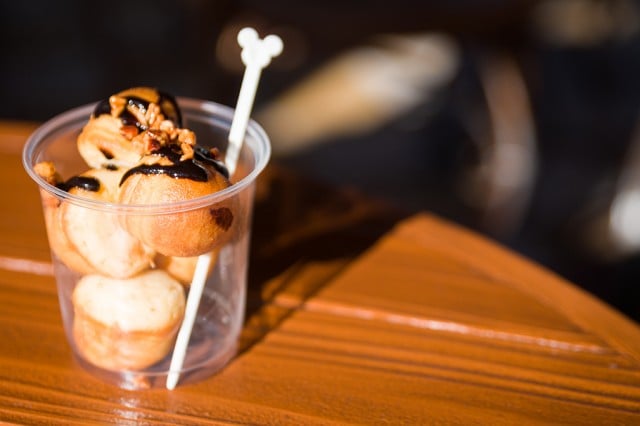 These Maple Cream Balls are yet another gem from Sultan’s Oasis. They’re sort of like the cream puffs you can get at Costco, except with a maple drizzle on top.

Yes, they are as awesome as they sound. I don’t want to overdo it with the Sultan’s Oasis snacks–we tried everything on their menu and they could literally do no wrong. We might have to do a full review of that place because even though it’s a snack stand, it is all sorts of awesome. 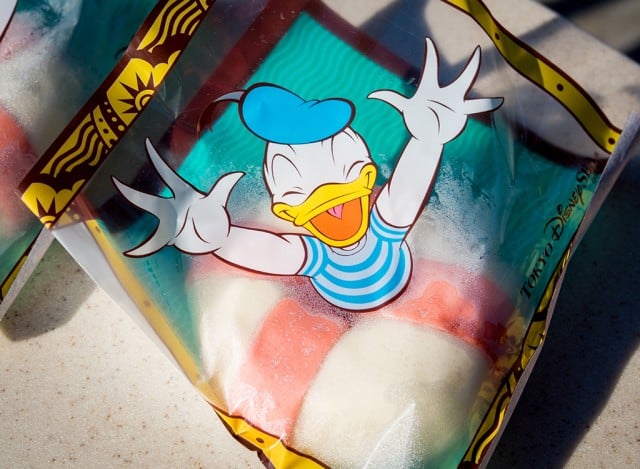 The are thick, loaded with shrimp, and taste delicious. I think of this as like the Japanese equivalent of a lobster roll (even though they’re really in no way comparable in terms of taste). Ukiwa Buns rank up there for me as one of the best snacks in Tokyo DisneySea. 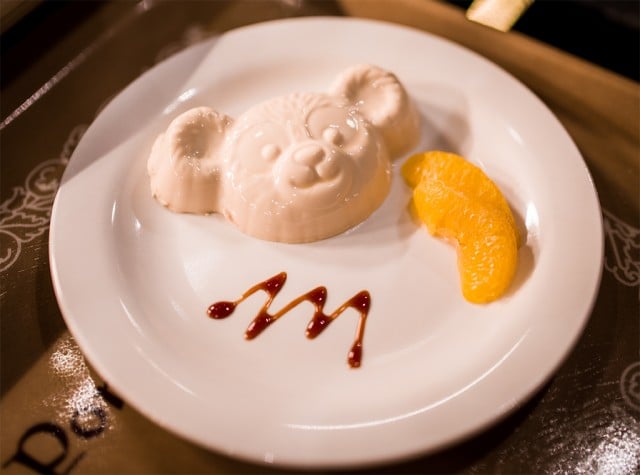 I don’t normally cover food that’s just regular stuff available at the Tokyo Disney Resort restaurants, but the next two items are exceptions. This Duffy jelly dessert was surprisingly good.

For you non-Duffy people out there, I’m sure there would be a certain satisfaction derived from eating Duffy’s face, too. 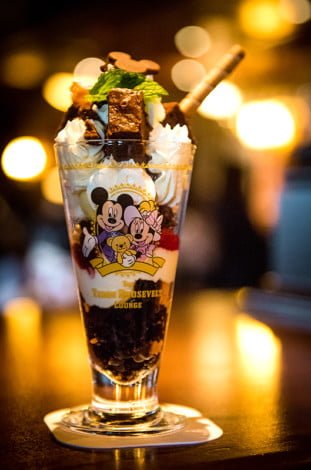 I don’t know the precise name of this dessert at Teddy Roosevelt Lounge, but it’s basically an ice cream sundae made to look like spaghetti. Why spaghetti? I can only assume because it’s awesome, and President Roosevelt would’ve wanted it that way.

Regardless, this sundae was delicious, with great taste and texture. Pretty much everything we had at Teddy Roosevelt Lounge was awesome, and that’s not just the booze talkin’. 😉 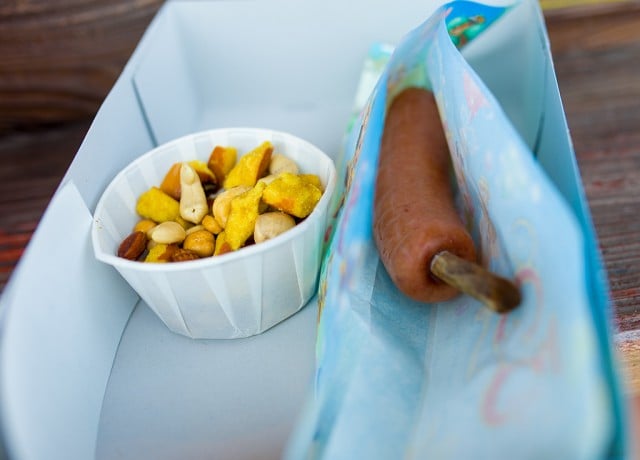 Barnacle Bill’s is a stand in the American Waterfront that has three things going for it: dinosaur decor, meat on a stick, and flavored beer.

Above is the meat on a stick, with was a mild sausage that was incredibly juicy and flavorful. I really liked it, even if it wasn’t incredibly unique. 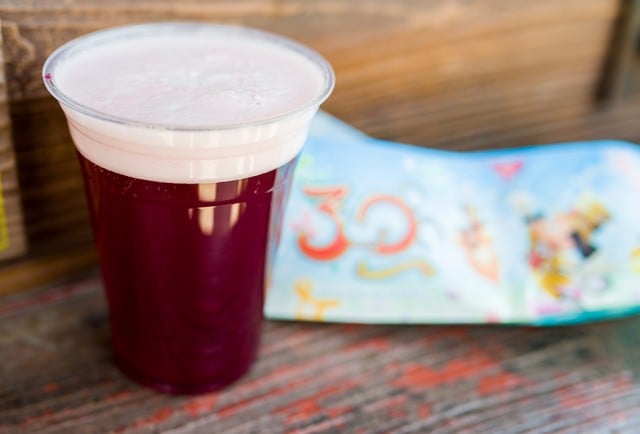 This flavored beer is also from Barnacle Bill’s, and was simply referred to as a special seasonal “red” beer. It had a bit of a fruity, citrus taste to it. It was fairly full-bodied, and wasn’t half bad. 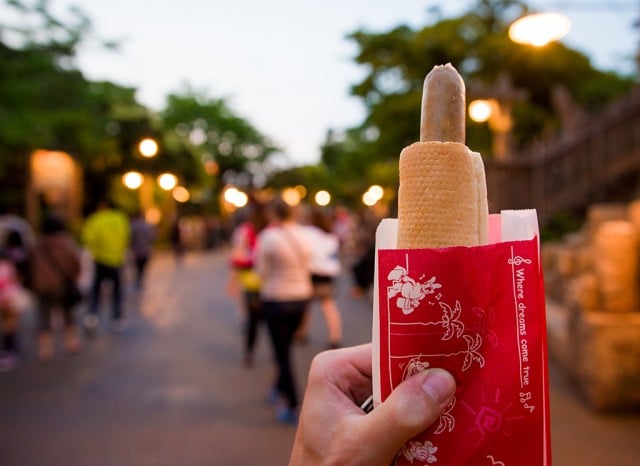 This is the Yucatan Sausage Roll at Expedition Eats–the first snack we ever had at Tokyo DisneySea! It was pretty good, although the roll was a little crunchier than I would’ve liked.

The sausage was very good, though. I wouldn’t call this an especially unique snack, so if you have a tight budget (or small stomach) it’s safe to skip. 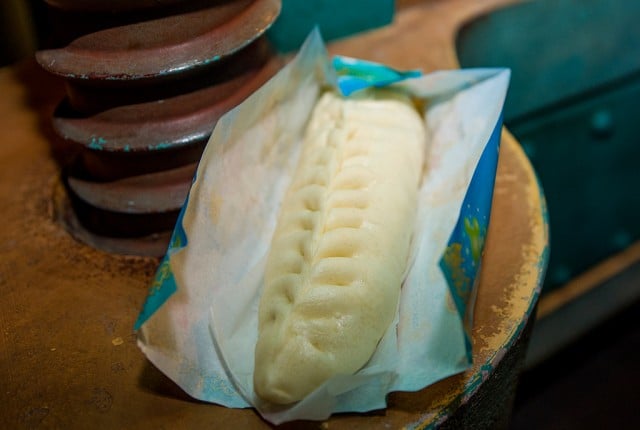 This is the world famous Mysterious Island Gyoza Dog. Besides the crazy popcorn flavors at Tokyo DisneySea, this is without question the most hyped snack. At one point, lines for this could be longer than some attractions in the park, so it was relocated to Nautilus Galley! It’s basically a soft, spongy roll stuffed with sausage and other stuff.

On our first trip to Tokyo, I wasn’t all that impressed–I thought it was a bit bland. On our second trip, I decided to give it another chance, and it lived up to the hype. I don’t it was so much a matter of the Gyoza Dog being different, I just split it the first time and probably didn’t get enough sausage in my bites of it. Lesson to be learned: do not share snacks at Tokyo DisneySea! 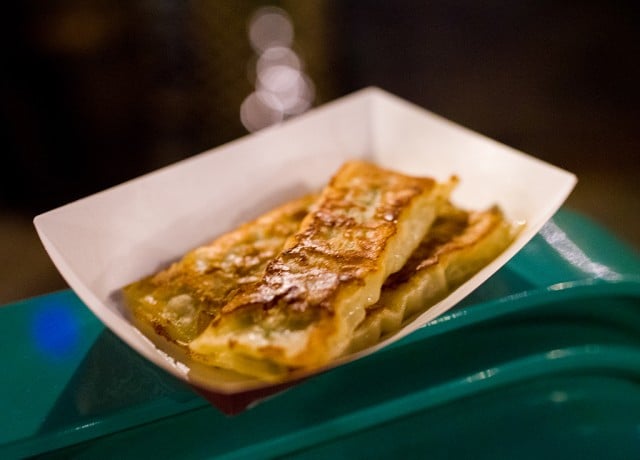 We ordered these Pork Gyoza at Nautilus Galley, and they were incredible. Great crisp fried pork flavor and excellent texture made them a real winner. In general, Nautilus Galley is a winner.

This little snack counter down at water level is away from crowds, offers a great view of the lagoon, and some good snacks. If you are a turkey leg addict, you can even get those here (they’re about $5 and look slightly smaller than the US turkey legs–we didn’t try them). 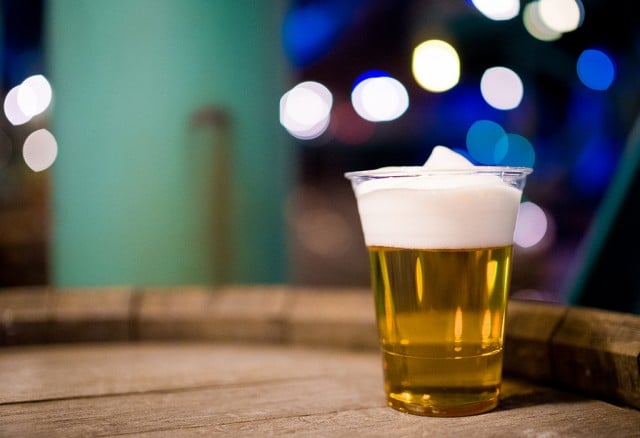 Also at Nautilus Galley is this Frozen Beer. It’s almost exactly like the frozen beer at the Japan pavilion in Epcot, which is to say, disgusting.

I’m convinced this concept is a total gimmick to sell people piss-water beer through the premise of a frozen head on it. 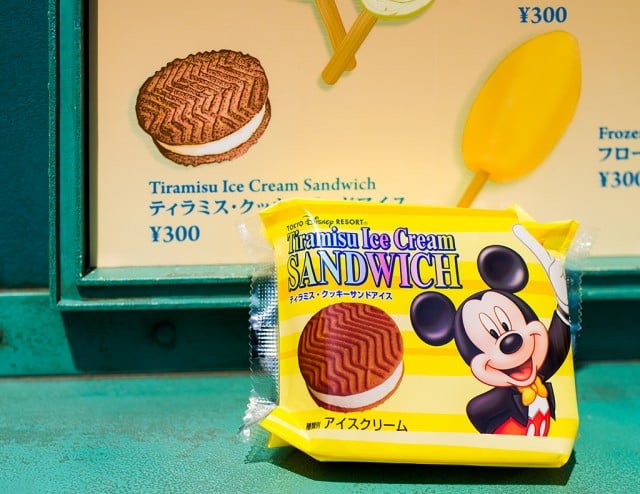 This Tiramisu Ice Cream Sandwich is available at ice cream carts around Tokyo DisneySea. At first we were reluctant to order it because packaged ice cream seems so generic to us (sorry, “Premium” Mickey Bar fans!), but this was excellent. I didn’t think tiramisu would translate well to ice cream, but it absolutely does.

The geniuses in charge of Tokyo DisneySea food & beverage need to tackle bacon flavored chocolate milk next. I’m convinced that there’s nothing that team can’t do well! 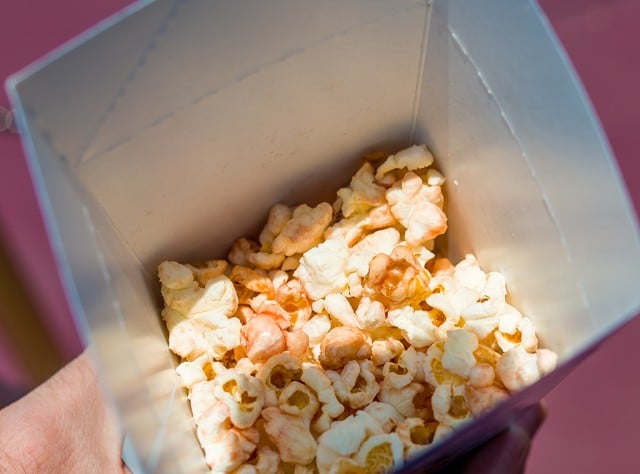 Tokyo Disney Resort is known for its bizarre flavors of popcorn, which in reality are viewed as “awesome” by most guests rather than bizarre. We were so excited to sample all of the different popcorn flavors that we bought a Duffy Spring Voyage “suitcase” the first night of our first trip so that we could save money on refills (in actuality, I don’t think it saves you money at all).

We ended up trying a few flavors of popcorn, but to be honest, the luster of this quickly wore off. This strawberry popcorn from Port Discovery was okay–it reminded me a bit of Fruit Loops cereal, and I’m not really sure if that’s a compliment or not. 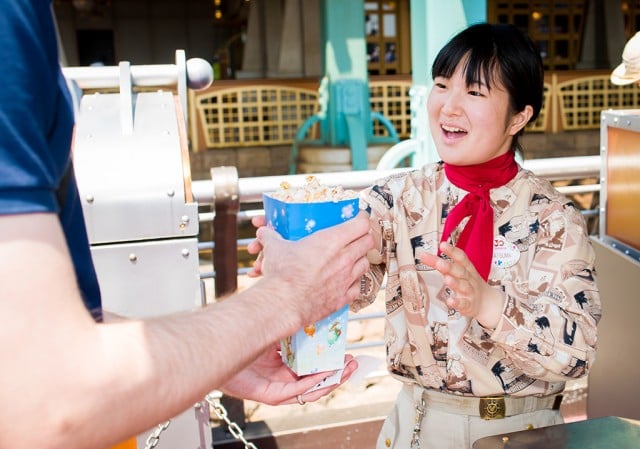 Part of it was the long lines for popcorn, part was that the flavors themselves generally weren’t all that great, but the biggest thing was that the other snacks were so good that it didn’t make a ton of sense to waste time and valuable stomach real estate on popcorn.

We were so unimpressed that we didn’t try any popcorn our second trip. We’ve given the popcorn more chances from time to time on subsequent trips, but it’s still not a snack we seek out. Everyone else seems to love it, though, so to each their own. 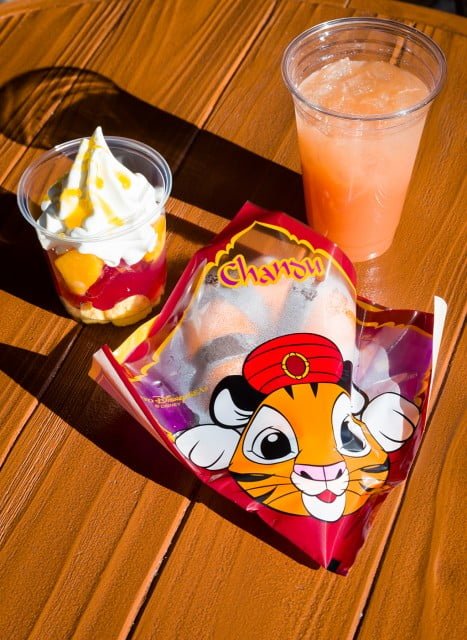 There you have our look at just a handful of the many snacks found all around Tokyo DisneySea! As you can see, there are a lot of interesting snacks in Tokyo DisneySea, and many of them are shockingly delicious. If you get a chance to head to Tokyo sometime, make sure that you bring plenty of money for grazing. Don’t forget to say hi to Chandu!

Which of these snacks looks best to you? If you’ve been to Tokyo DisneySea, what are your favorite snacks there? Please share your thoughts and questions in the comments!