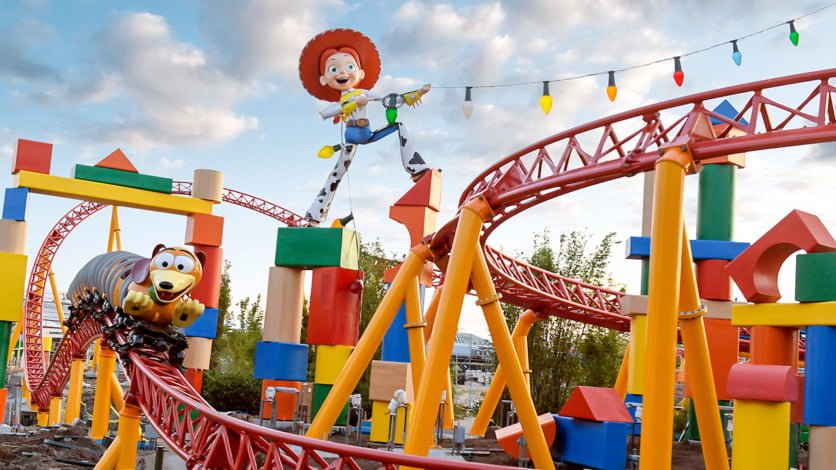 We have an official opening date for Toy Story Land at Disney’s Hollywood Studios! The grand opening will be June 30, 2018, which is later than expected. (Last updated June 8, 2018–see new section at bottom of post.)

In fact, following the progress update at last summer’s D23 Expo, I wrote: “I would not be surprised to see Toy Story Land soft open in time for Easter/Spring Break 2018. I’m not ready to make that ‘bold’ prediction just yet, but it certainly appears that construction is quite far along.”

This only seemed to be re-affirmed last September, when Slinky Dog Dash Roller Coaster began cycling, a step that usually begins a few months before a roller coaster is slated to open. Given that this is the flagship attraction of Toy Story Land, it seemed likely that Toy Story Land would have no problems making a Memorial Day 2018 official grand opening.

So, why June 30, 2018? We have no idea. The few progress photos we’ve seen of the construction site have shown slow progress since last fall, and it’s unclear whether this is by design or due to unforeseen delays. We have not heard of any rumors of delays on the project, but then again, we haven’t heard much of anything.

It’s possible this is entirely by design. At this point, we’re beating a dead horse with this, but mid-June through mid-July was one of the slowest times of the year at Walt Disney World last year (if not the slowest stretch), so this opening date might be strategic. Even the Fourth of July, which used to be incredibly busy, has been comparatively light in the last couple of years.

Get guests booking trips for opening weekend and Florida residents and those in nearby states to make the trek down to Orlando for a long weekend trip. (A long weekend trip during Peak Season in terms of ticket pricing, we might add…and also one that has lower-tier Annual Passholder blockouts, potentially pushing some fans into buying single day tickets during their blockout dates.)

That’s totally speculation on our part, but we really don’t know how else to explain the June 30, 2018 opening for Toy Story Land. Aside from Slinky Dog Dash, it’s not as if anything being done in Toy Story Land is exactly reinventing the wheel. Alien Swirling Saucers is a re-skinned clone of Mater’s Junkyard Jamboree, and work has been underway to re-route the entrance for Toy Story Mania for a few weeks already.

As for the land’s overarching thematic work, it’s relatively straightforward. While this Toy Story Land will differ considerably from the existing Toy Story Lands in Hong Kong and Paris, the premise remains the same: guests shrink to the size of a toy to explore the world of Andy’s backyard with favorite Toy Story characters, including Woody and Buzz.

Toy Story Land is not some richly-themed environment like Pandora or Star Wars: Galaxy’s Edge that will take years to complete. The basic work on the walkways and other outdoor areas could easily completed by April if Disney wanted to fast-track the work and get the project done by then.

It’s also possible that the ‘delay’ is by design to the extent that Disney’s resources to construct all of its simultaneous projects in Florida are spread too thin. The construction labor and subcontractor pool in Central Florida is only so deep, and if faced with that problem, Disney might have chosen to prioritize hotel construction work and consciously made the decision to let Toy Story Land slip into June.

It’s still highly likely that Toy Story Land will have soft openings or Annual Passholder previews prior to this June 30, 2018 grand opening date. What form these take is unclear, as well as when they will start occurring. We’d hazard a guess they won’t be pre-registered a la Pandora – World of Avatar, but that’s just a guess. (Part of that might be wishful thinking–we prefer the unannounced soft openings, and think they make more sense for this smaller scale land.)

If this June grand opening date is a calculated move to spike June and July crowds, it’s entirely possible that soft openings still begin by Memorial Day or early June. This would be a way for Walt Disney World to test the attractions and Cast Members to gain experience in a relatively lower crowd scenario, so that would definitely be a plus.

Unannounced soft openings by mid-June would also be great for guests, and probably the best chance at experiencing Toy Story Land between now and 2022 with low crowds. (We’re currently faced with the dilemma of whether to book a late-ish June trip before the official opening, but the chances of being burned with a lack of soft openings and having to deal with Florida’s summer humidity has us reluctant to do that.) 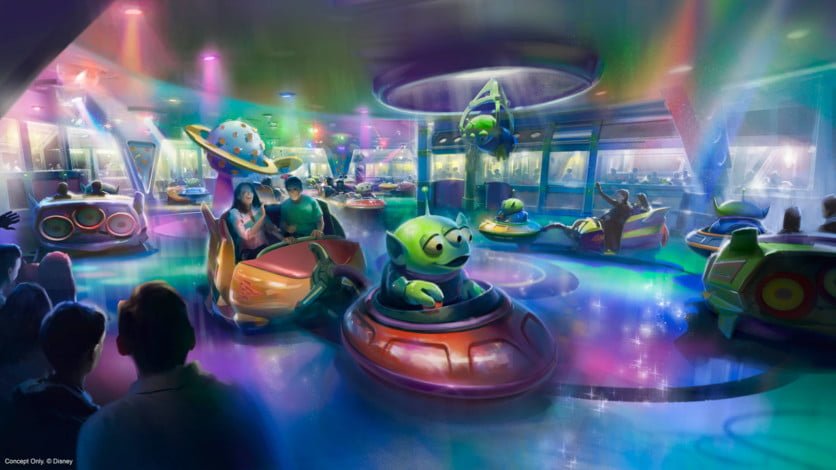 June 7, 2018 Update: Cast Members working at Disney’s Hollywood Studios have been notified that there will not be any sort of guest previews for Toy Story Land, and that the only attraction they will be able to preview is Slinky Dog Dash. It’s not even certain that both new attractions will be ready for media previews a couple of days before the land’s grand opening. (Disney has announced exclusive Annual Passholder “Postviews” for Toy Story Land in September, though.)

Previously, we thought Toy Story Land would be a very different scenario than Frozen Ever After, the opening of which was delayed into summer, with the attraction being worked on even after it opened. If you told us last September that Toy Story Land wouldn’t open until June 30, 2018, we would’ve laughed at you.

Now, Toy Story Land is in the same boat. The land is struggling to make its June opening date, and while we have been advised that Toy Story Land definitely will open on June 30, it’s unclear whether it’ll be totally done. The good news in this, at least, is that Slinky Dog Dash is not the problem, and it (hopefully) should not run into issues with downtime once the land debuts because it was rushed to make an opening deadline.

Alien Swirling Saucers is a different story, but hopefully it will be ready to go by the end of June. To us, it seems a bit odd that there are delays with this attraction–it’s pretty “simple” by ride system standards, and this is basically just Mater’s Junkyard Jamboree with a different look.

Still, this could mean a rocky start for Toy Story Land the first couple of weeks once it does debut. It’s unknown what problems might exist, and whether Cast Members will have a sufficient training period on the attractions between the time Imagineering hands off the land to Operations, and the time the opens to the generally public. This will likely be compounded by heavy crowds eager to experience this major addition to Disney’s Hollywood Studios. We’ll keep you posted on what else we hear, and whether the pace of construction picks up and if whatever problems exist are remedied prior to opening.

Are you excited for Toy Story Land, or is this just a light appetizer until Star Wars: Galaxy’s Edge in 2019? 😉 Will you be booking a June or July 2018 Walt Disney World vacation to experience Toy Story Land at opening? Any soft opening theories of your own to add? Any questions? Hearing your feedback about your experiences is both interesting to us and helpful to other readers, so please share your thoughts or questions below in the comments!