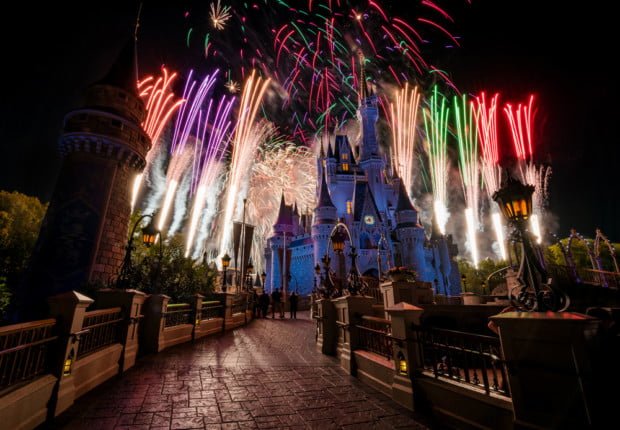 Originally, my plan was to scour old trip reports and quote myself as a way to share what Wishes has meant to us over the years. This is not (just) because I’m arrogant and/or lazy enough to quote myself. Rather, it’s because my opinion of Wishes has changed quite a bit over the years, and I thought tidbits from old trip reports would be nice time capsules of how I’ve felt about it at various times.

After spending a couple hours engaged in futile searches (speaking of which, the search feature on this blog is atrocious; someone should really look into that!), I realized I haven’t said a whole lot about it over the years. Most of my commentary has revolved around how to take photos of it, and I’m not sure photo-jargon is the best way to pay tribute to Wishes. Instead, I’ll recount from memory how my opinion of Wishes has come full circle…

Before that, let’s start with some history. Although Wishes has had a long run, its run has not been nearly as long as that of its predecessor, Fantasy in the Sky.

This show made its debut in 1971 and ran for over 3 decades, until being retired when Wishes debuted in 2003. (A pyro-heavy variation of Fantasy in the Sky still is shown for New Year’s Eve.) 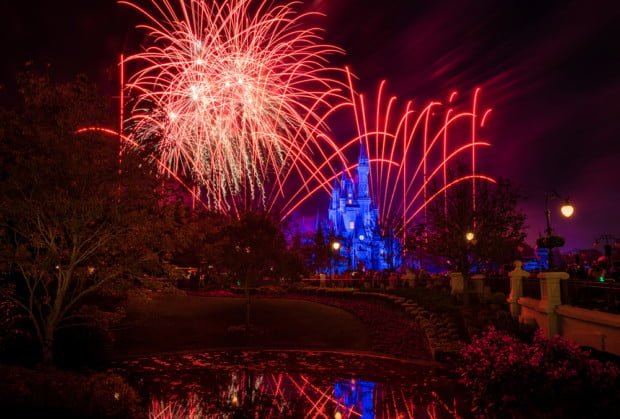 Wishes was the flagship draw for the celebration, which also included the addition of Mickey’s PhilharMagic. 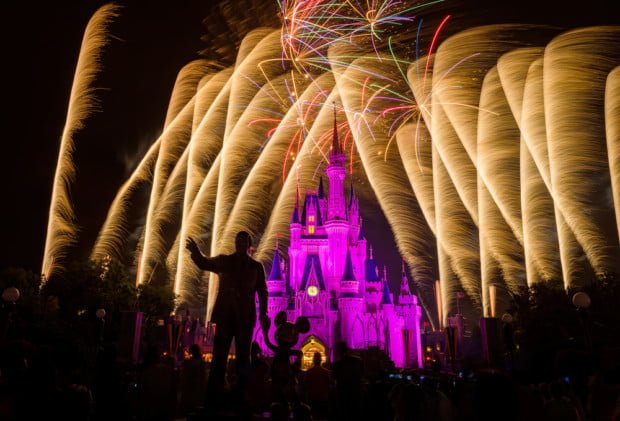 A couple of years old, Wishes was still relatively new at this point. 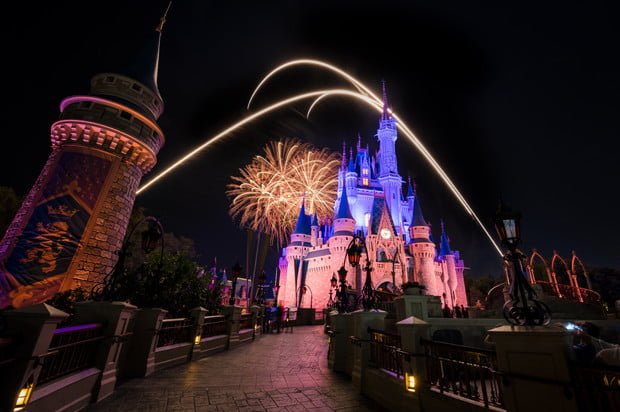 Wishes differed from previous castle parks fireworks shows that predated it in that it used a narrative thread to weave songs together, tugging at the heartstrings of guests in the process.

Whereas Fantasy in the Sky was enjoyable for recognizable music and fun pyro, Wishes was a bona-fide nighttime spectacular. 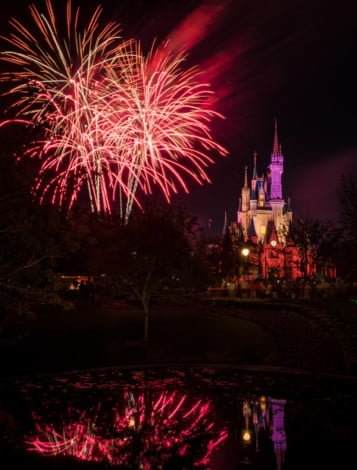 It was not just pyro and music. It resonated emotionally on its own terms. It starts with a young girl singing the lines ‘star light, star bright’, followed by Jiminy Cricket’s opening narration about wishes coming true and Tinker Bell flying down–by the time the character ‘montage’ of Wishes lines finishes in the opening scenes, you’re hooked.

Walt Disney World has used a similar formula since with Magic Kingdom stage shows and other entertainment, but I don’t think anything has had the same emotional heft as Wishes. 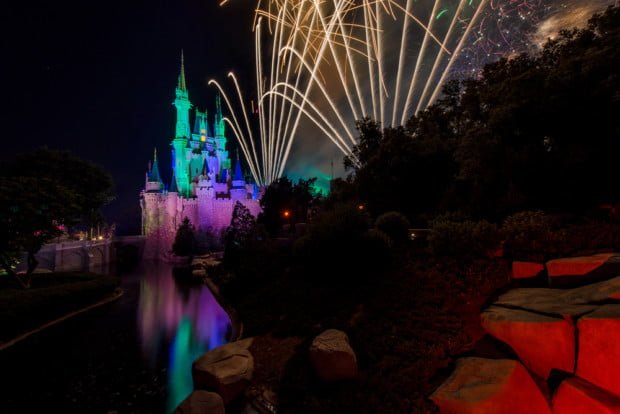 Part of this is undoubtedly the inherent appeal of fireworks, another part is the characters used, and I think the timing of Wishes also plays a part.

It’s the end of a long day in Magic Kingdom, you’re simultaneously running on empty and satisfied after a long day in the parks, emotionally vulnerable in a way, and it just hits you like a freight train, with what the kids call “the feels.” 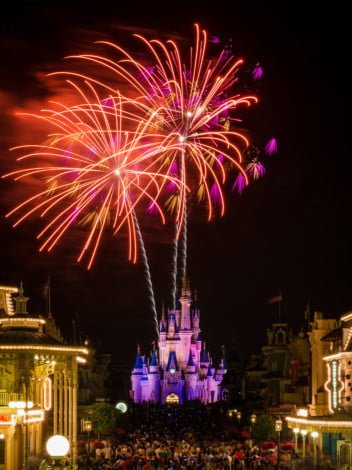 Basically, Wishes is the icing on the (castle) cake that is a day in Magic Kingdom, and has been that for an entire generation of guests… 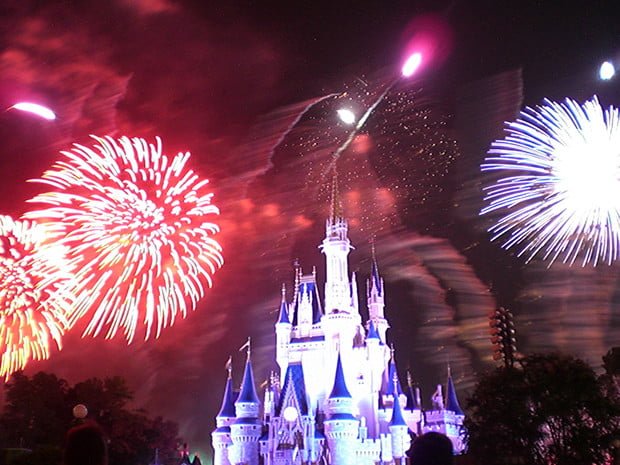 My initial impression of Wishes was similarly born in emotion. We were waiting for Wishes and SpectroMagic on our first trip together in 2006, camped out on Main Street. (Above is a rare fireworks photo I took during my point and shoot days. Yeah…I had no clue what I was doing.)

This was my first time ever seeing a fireworks spectacular. I had no doubt seen Fantasy in the Sky as a child, but it was not particularly memorable beyond being a fireworks show with a castle. 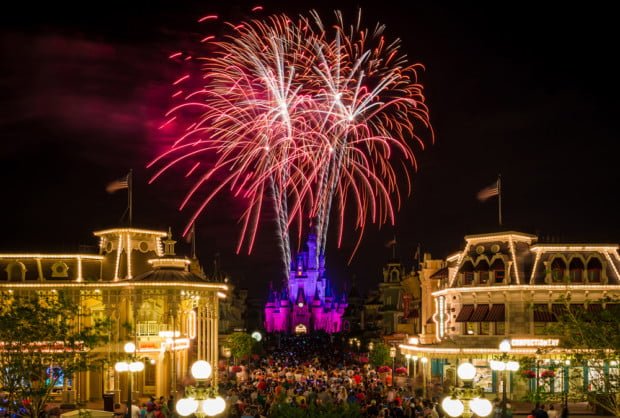 By contrast, Wishes oozed emotion. It had heart, and lots of it. The night stuck with me, and my perspective on Wishes became inextricably interwoven with the emotions of that night in Magic Kingdom.

As anticipation for our next trip the following summer built, seeing Wishes and SpectroMagic were a must-do. 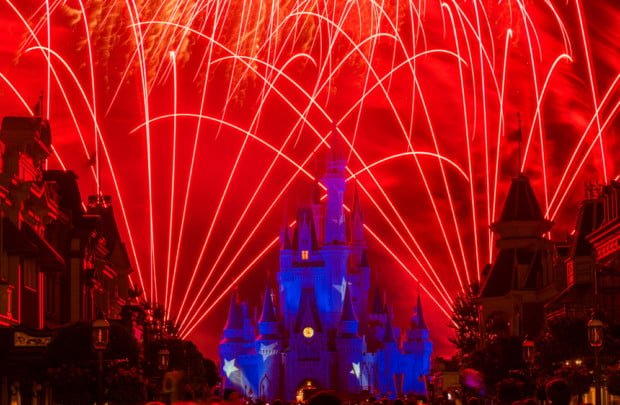 I’d imagine you can think back to your own first time seeing Wishes, and the emotion associated with that experience. For many of you, I’m guessing that would be your first-ever day in Magic Kingdom.

If you’ve since made multiple trips back to Walt Disney World, that was undoubtedly a positive experience–a day that’s etched into your memory. 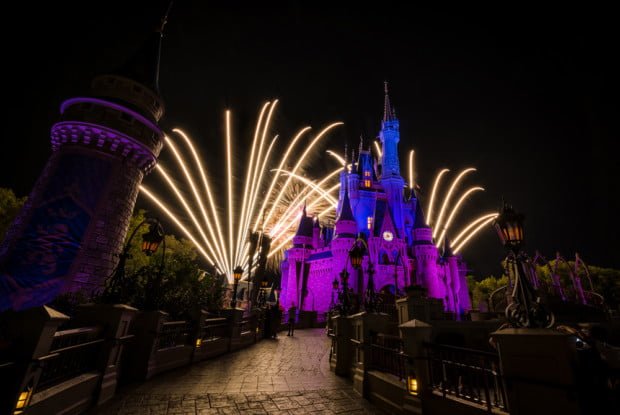 If you’re a sentimentalist, perhaps every time seeing Wishes takes you back to that first viewing. Even if not consciously, there are those feelings tied to Wishes.

I’m not ashamed to admit that this is the case for me, and I think nostalgia is a big key to Disney’s success and longevity. 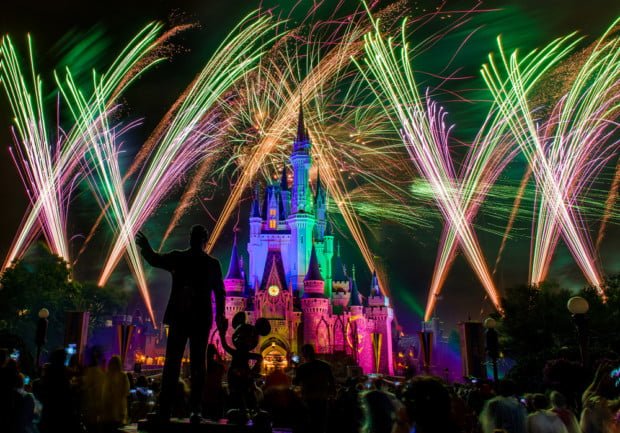 My first known/recorded (I feel like an anthropologist for myself) description of Wishes followed our Summer 2007 trip, when I wrote that it was a “magical show that will always give me goose bumps.”

Those feelings stem from the emotion attached to Wishes, at least in part. 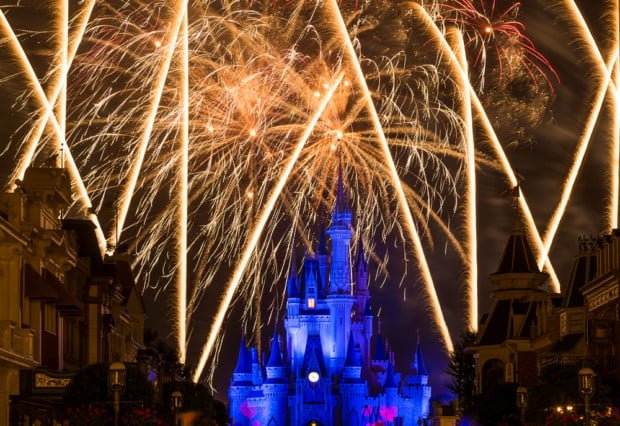 For our first few years visiting Walt Disney World together, the one-two punch of Wishes and SpectroMagic were the defining nighttime experience in Magic Kingdom.

These two mirrored one another in their orchestral style, and felt like two halves of a whole, even if they debuted at different times and are, ostensibly, dissimilar. 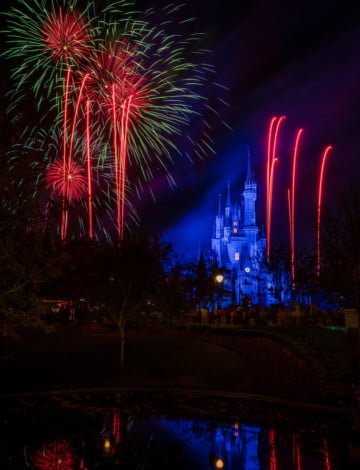 They say Tom Brokaw is the ‘voice of a generation,’ but for us during those summer nights, Jiminy Cricket was the voice of our generation…at least as it related to Walt Disney World visits, I guess.

The omnipresence of Jiminy’s voice, setting the mood in Magic Kingdom at night is something I already miss. I feel it’s something I’ll really miss once Wishes is retired. 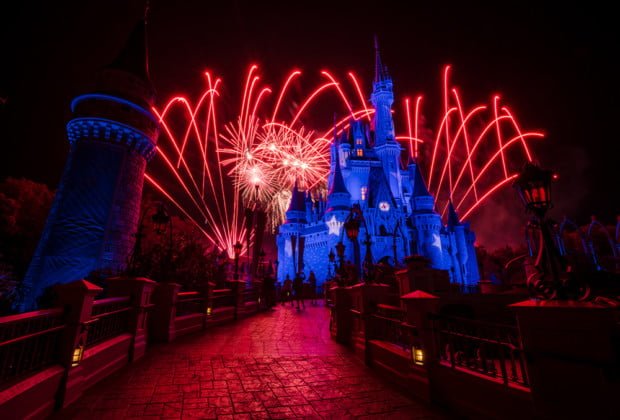 Still, Wishes tugged at our heartstrings thanks to those nights on Main Street waiting for Wishes and SpectroMagic. 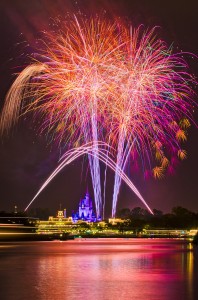 My opinion of Wishes started to change in 2010. That was the start of the “Summer Nightastic!” promotion, and we honeymooned at Walt Disney World and visited Disneyland for the first time then.

During that, SpectroMagic vanished and the Summer Nightastic Fireworks appeared (a retooled version of Magic, Music and Mayhem) at Walt Disney World. Meanwhile, at Disneyland, we saw Magical. 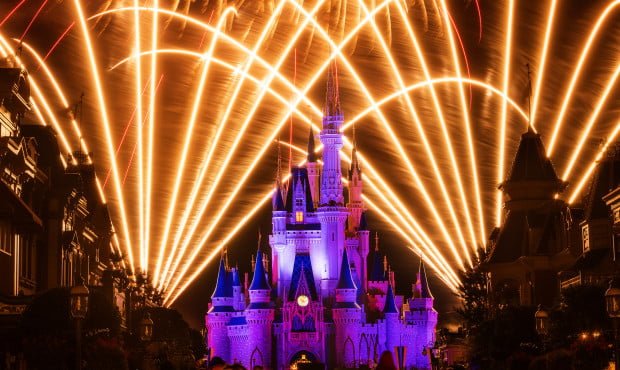 That was also about the time when I started to think about Disney through more of a critical lens, analyzing my experiences instead of just enjoying them at face value (sometimes I miss the ‘good ole days’). In so doing, I began trying to separate nostalgia and emotion from the substance of experiences.

Admittedly, this is almost impossible to do. Compartmentalizing the substance of something from the history of emotions it provokes is an imprecise task. 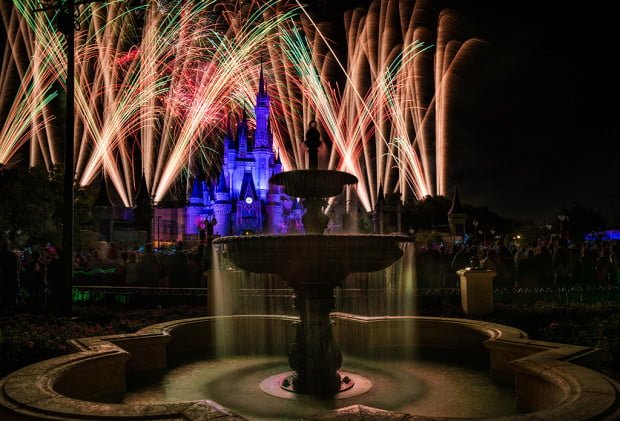 Nevertheless, Wishes could be compared to other fireworks shows, which I felt were objectively better. I also began to think of its narration and lyrics as a bit cornballish and overwrought.

Over time, this perspective plus crowds on Main Street plus overexposure to the show led to us making less of a point to watch Wishes. (It’s also possible that without SpectroMagic, the second half of its one-two punch, Wishes no longer packed the same punch for me.) 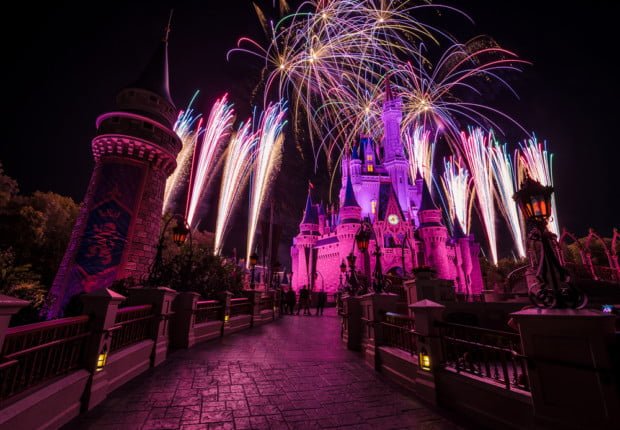 Afterwards, we both remarked to one another that it was nice having a front row view of the fireworks, and not being packed onto Main Street like sardines. This was actually the first time we’ve made a point to watch Wishes from start to finish with a front-on view of the show, and it reminded me a bit of those ‘early days’ watching Wishes. 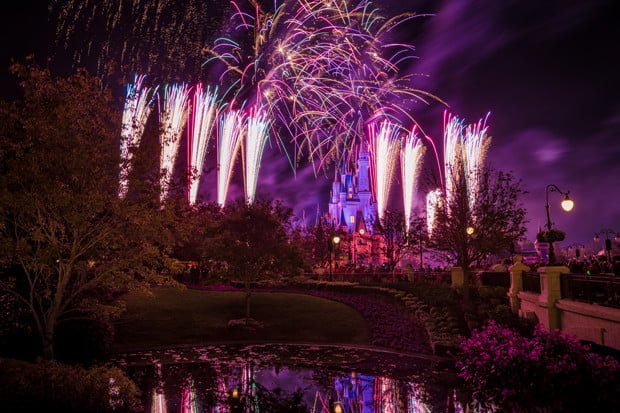 The following night was more emotional. The Disney Parks Blog announced that morning that Wishes would be replaced with Happily Ever After, so we made a point of seeing Wishes one last time.

Wanting to savor the experience, we opted for a spot away from crowds by Crystal Palace (ironically, this used to be one of our top spots on our Magic Kingdom Fireworks Viewing Guide, but fell off the list during the Hub redesign…now I’m not really sure why it did!) 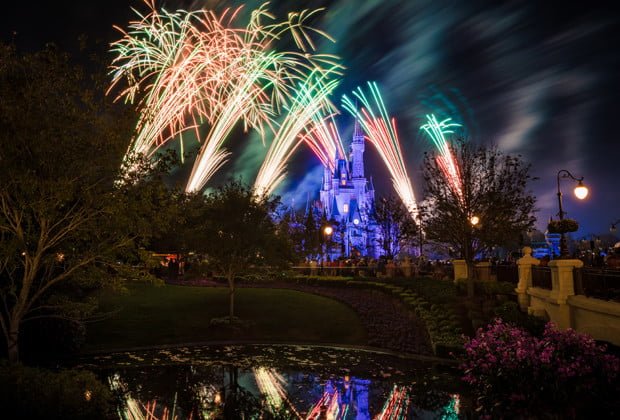 This was the perfect spot to say goodbye to Wishes, and we were both a little choked up by the end. As the crowds started to clear, we thought back on some favorite memories watching Wishes.

We reminisced about how the show has been such a key aspect of our Walt Disney World experience since the beginning, almost as if we were just realizing this for the first time. 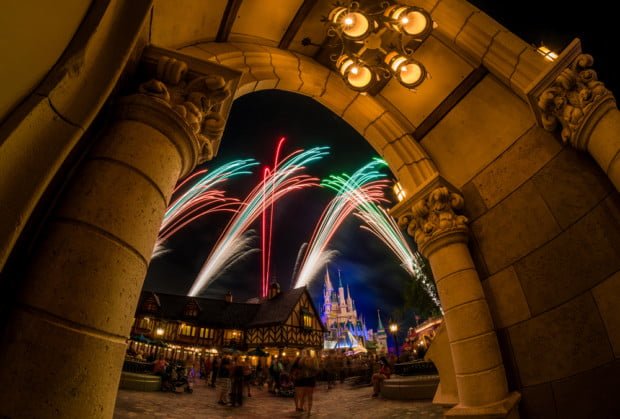 As I’ve said, nostalgia is powerful stuff. Never has that been more clear to me than as I stood there, with bittersweet feelings after my last viewing of a fireworks show I’ve previously said was overdue for a replacement.

For me, this was coming full circle on Wishes. That night, Wishes rekindled the same feelings I had the first time seeing the show. It’s crazy how that works, but it’s part of the appeal of Disney. Capture and relive memories, and stir feelings and emotions felt on past visits. 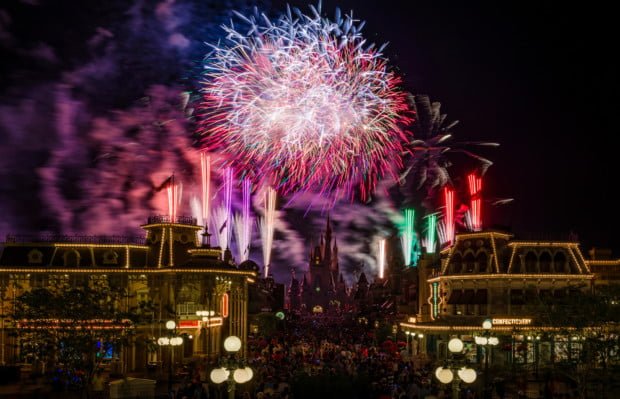 I know many tears will be shed by guests watching the last showing of Wishes on May 11, and my eyes will probably be among those welling up (but just a bit–I’m super tough) even as I’m thousands of miles away, watching via live stream. However, the occasion will truly be bittersweet. Once I pay my respects one last time and finish that viewing, I’ll be looking forward to seeing Happily Ever After in a few weeks. Wishes has enjoyed a lengthy run during which time it has left an indelible mark on Magic Kingdom guests. It owns a lasting legacy, and will live on in our memories. Magic Kingdom deserves a new nighttime spectacular, and I hope what it receives lives up to expectations. I’m cautiously optimistic that Happily Ever After will build on the legacy of fireworks spectaculars that have debuted in castle parks since Wishes, bringing a whole new generation of Disney fans a fireworks show of their own–and giving old fogies like me something else around which to form new memories.

What are your memories of Wishes? Are you sad that it’s coming to an end, or are you ready for something new…or a little of both? When was your first time seeing Wishes? In terms of Disney legacies, where do you think Wishes will go down in the history of Disney fireworks shows? Any questions? Please share your own stories, memories, etc. in the comments below!

26 Responses to “Wishes! A Magical Gathering of Disney Dreams Tribute”