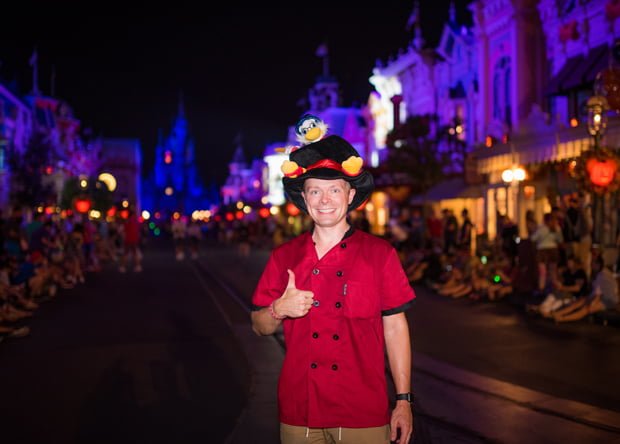 If you’re looking for step-by-step strategy for the event, consult our Mickey’s Not So Scary Halloween Party Tips post instead. Basically, this is a trip report…but for just the Halloween Party. We’ll have similar “reports” from our recent Walt Disney World trip in the coming weeks.

Pictured above is my exquisite costume for this year. Now, I know what you’re thinking: where is Tom…all I see is Scrooge McDuck?! You won’t believe it, but I made this all by myself. And by “made,” I mean I bought the hat at Tokyo Disneyland and the shirt from Amazon, but it was my idea to wear both at the same time. (Curation is a “thing” these days.) For most of the night, it was too hot to wear the hat, meaning I just looked like a sweaty chef running around taking photos. Cool.

Perhaps my costume looks “lame” but keep in mind that this was early September in Florida. Sarah ended up not wearing her costume at all because we have both become wimps when it comes to humidity. If you’re from a state that was not built on a swamp, you might want a refresher on our “rules” for MNSSHP costumes in our Disney Halloween Costume Tips post. No matter what anyone else says, I think my costume was cool in every sense of the word…

As usual, you can enter Magic Kingdom with Mickey’s Not So Scary Halloween Party tickets beginning at 4 p.m. We begin around that time, when we headed to the candy trail behind Main Street sponsored by Mars (the candy company, not the planet). 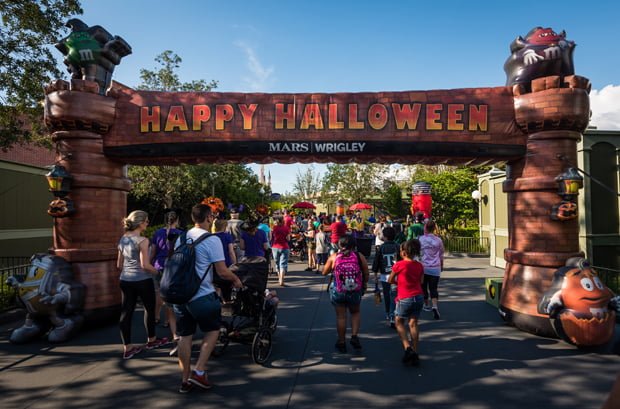 This is the second year they’ve done this, and it’s a nice touch for people like us who don’t want to spend valuable party time hunting for candy. At an event where each hour is worth $15-20 (literally), it seems silly to fixate on collecting candy that costs pennies…BUT THAT’S JUST US.

We didn’t actually eat this candy, as we had a long night of special desserts ahead of us. Instead, we did what every other Walt Disney World guest with leftovers does: we fed it to ducks. (Kidding.) 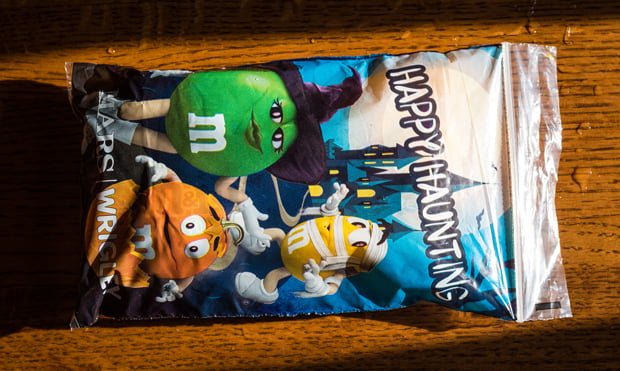 We ended up saving the candy and put it in our Hurricane Irma prep kit. This time, I’m actually not kidding, and I’m sure you Floridians are laughing that our idea of hurricane prep includes candy. (Spoiler: it also included nasty pizza.)

At this point, we would normally recommend people head to the Main Street Firehouse to pick up the party-specific Sorcerers of the Magic Kingdom card.

Like most people, we haven’t played this game since the year it was introduced, so we forgot to pick up this card. That was a huge error in judgment, as I’m all for anything Country Bears, even if it also relates to Sorcerers of the Magic Kingdom.

As with last year, Mickey’s Not So Scary Halloween Party guests can meet Jack and Sally early (around 5:00pm) at the Liberty Square gazebo, and the Seven Dwarfs in Storybook Circus (around 6 or 6:30 p.m.). Word has gotten out about these meet & greets, with lines forming this year as early as 4 p.m.

Elsewhere on the character front, Moana is meeting in Adventureland during Mickey’s Not So Scary Halloween Party, which is a Magic Kingdom first. We checked out her meet & greet a couple of times during the course of the night, but the line was always too long for us. This is not the first time she’s met at Walt Disney World, but since she’s new to MNSSHP, I guess she’s a must-do for character enthusiasts? 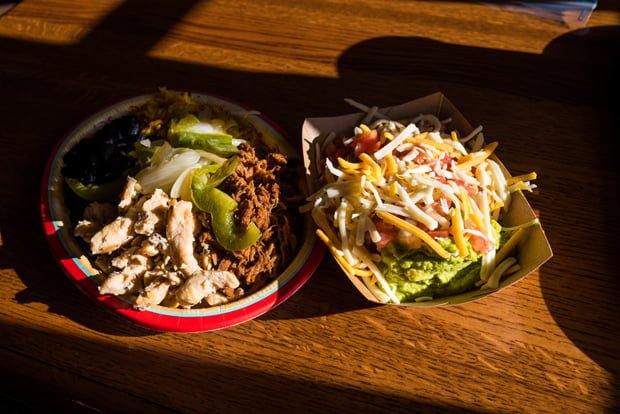 We didn’t have time for this foolishness, instead opting for the foolishness of pigging out on the various Halloween desserts sold during the party. Our goal was to collect all of the flavors of the Haunted Mansion desserts, which were–naturally–sold as far away from one another as geographically possible without selling one of them at Animal Kingdom.

Unfortunately, none of these were available until 7 p.m., so we had to run out the clock after wandering around a bit, which we did by enjoying dinner at Pecos Bill. This has become our go-to dinner spot for event party nights, as we can split a dish to sufficiently fill us with “real” food, and then not feel so bad about going crazy on party treats. 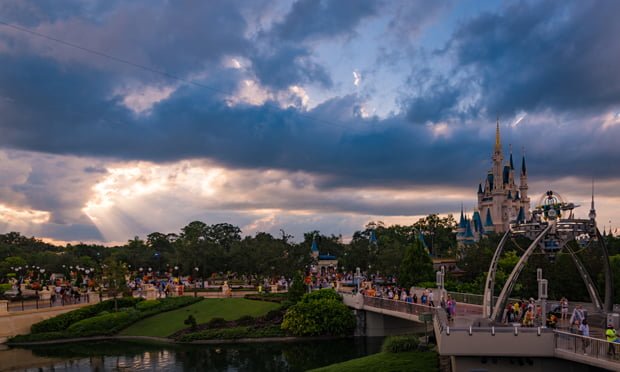 After this, the top item on our agenda was trying the Pumpkin Mickey Waffle with vanilla ice cream, whipped cream, sprinkles and caramel sauce at Sleepy Hollow. It had been a while since we had tried this much-hyped dessert, and it was far better than either of us remembered. 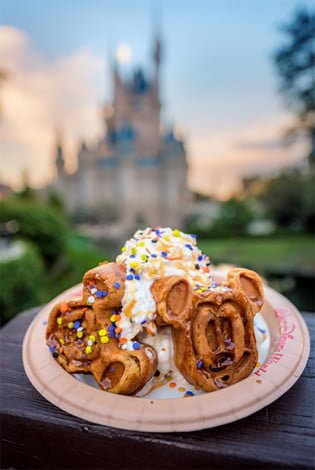 We tried several other desserts at Mickey’s Not So Scary Halloween Party and throughout our visits to Magic Kingdom. We already have a separate Halloween Desserts in Magic Kingdom post, so I won’t fixate on those here.

At this point, the party was about to start, and we were really excited…or perhaps that was all the sugar from those Halloween desserts. Either way, I love the energy in Magic Kingdom right around the start of both the Halloween and Christmas Party. 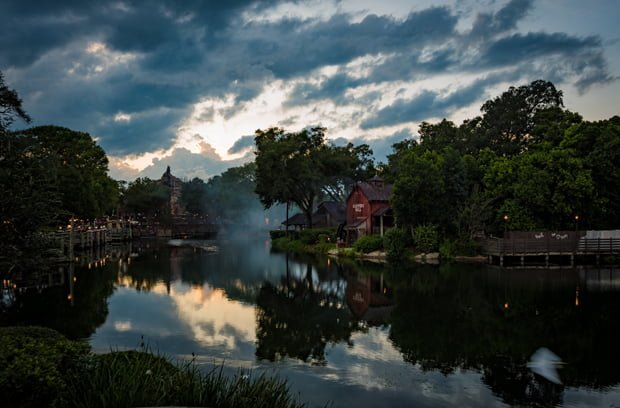 Magic Kingdom is transitioning from its normal operations to the festive energy, guests are arriving in costume, and evening air is starting to cool everyone down. There’s a palpable feeling of unbridled happiness in a park that’s already quite happy on a regular basis.

With Mickey’s Not So Scary Halloween Party, the other part of the park with the most sympathetic vibrations is Haunted Mansion, which is preparing for a swinging wake as the always delightful Lady Renata takes her seat in the lawn. This year, she was joined Butler Broome, who you may recognize from the Adventurers Club (or, if you’re a newer fan, from the Disney’s Magical Express video). 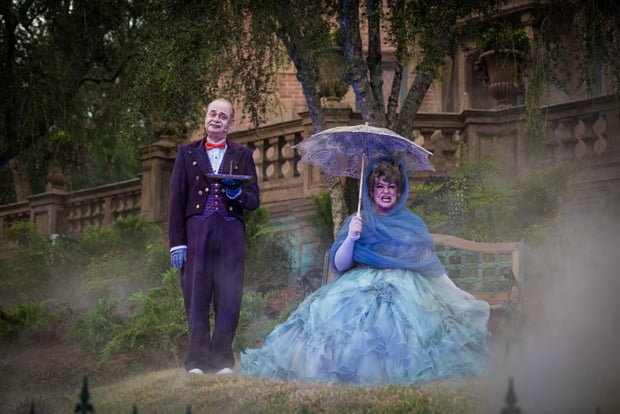 We hung around here for a bit, laughing at their engaging act. The two seemed to have good chemistry, and their interactions with one another and the audience were hilarious. Watching this area become even more ominous with fog and various lighting effects is also always a highlight of the event. We don’t usually do rides during the Halloween Party, but spending time outside of Haunted Mansion is always a must.

Given that this was an early September Mickey’s Not So Scary Halloween Party, we did not expect it to be too crowded. (See our Least Crowded Mickey’s Not So Scary Halloween Party Nights post for the best days to go to avoid crowds.) However, since it was announced the night before that Sunday’s party would be canceled due to Hurricane Irma, I think a lot of people rescheduled to this evening, making it busier than it otherwise would’ve been. 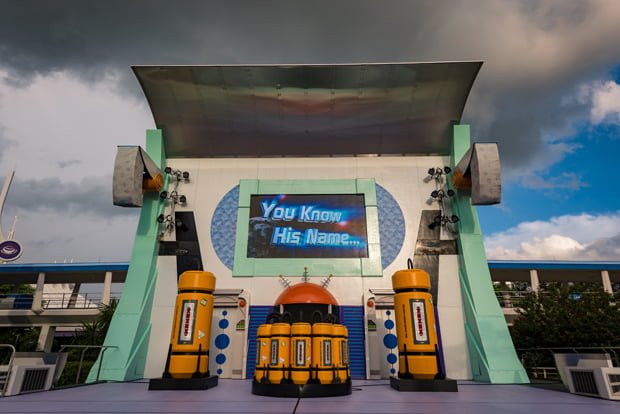 Because of that, we decided to head to Main Street early, to watch the first Hocus Pocus show, but mainly, to stake out spots for the Boo to You Parade. For me, the highlight of Mickey’s Not So Scary Halloween Party is this parade, and I typically spend about half of the party camping out for the two parades.

The first parade wasn’t starting for almost an hour, which meant it wasn’t getting to Main Street for much longer than that, but we decided to err on the side of caution. We scoped out a few potential spots on Main Street, ultimately opting for a location in front of Cinderella Castle.

If this seems familiar, it’s because we did the exact same thing last year. It’s a good spot that tends to open in the chaos after the first Hocus Pocus ends, and it’s a good spot for cool (albeit it really challenging, due to the lighting) photos.

Here are some of my shots from our first viewing of the Boo to You Parade: 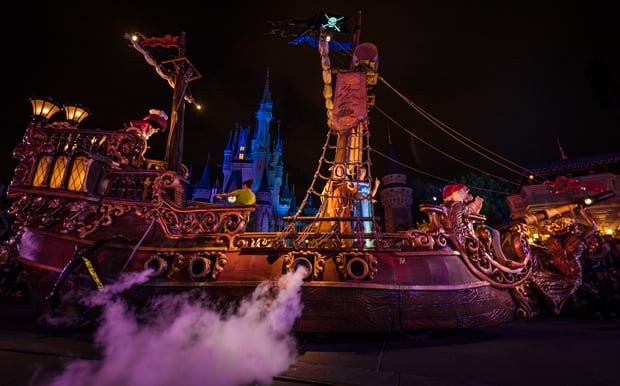 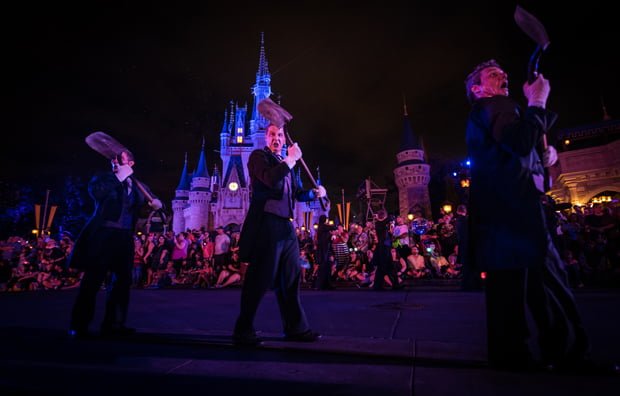 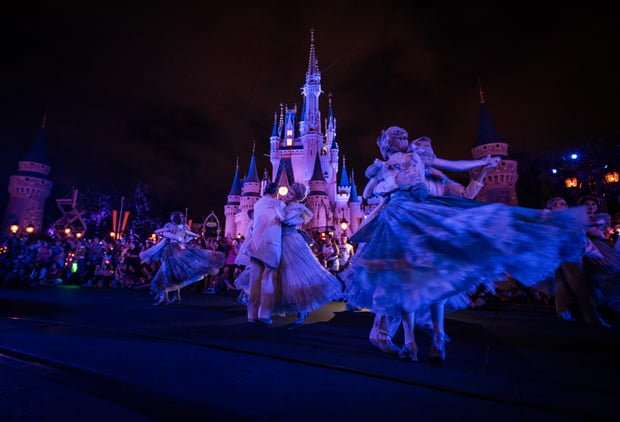 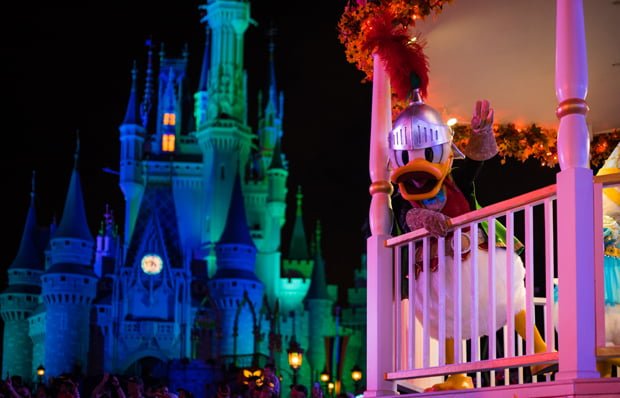 Boo to You Parade remains parade-perfection. Or near perfection. While I think some things could use tweaking, I hope the parade is not outright replaced at any time in the near future. This is the pinnacle of special-event parades anywhere.

In my opinion, it’s better than any seasonal parade at any Disney park in the world. Yes, that includes Tokyo Disneyland’s Halloween, Christmas, and Easter parades.

After the first parade, we had a bit of time before the HalloWishes fireworks. I wanted to photograph them from a unique location…and also it was hot so we didn’t want to move much, so we moved forward to the seated area in front of Cinderella Castle. 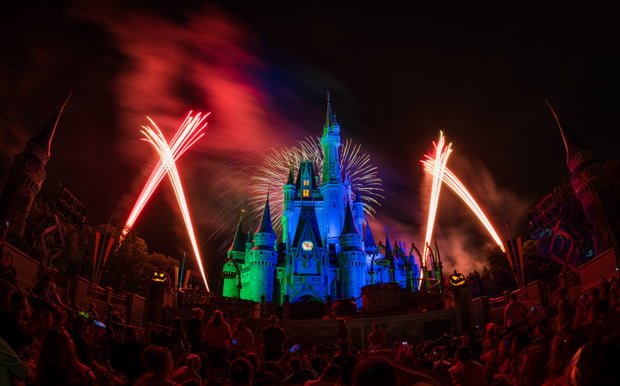 In terms of viewing the show, this is a terrible location. I point this out in our Magic Kingdom Fireworks Viewing Spots post, and the advice there holds true.

However, I wanted a few specific photos, so we chose this spot. I’m not sure why so many others crowded into this area when farther down Main Street was not nearly as crowded…unless the iPadography crowd was looking for the same shots as I was?

Even with an obstructed view, HalloWishes remains exceptional. With that said, it is starting to show its age a bit. If you go from watching Happily Ever After one night to this the next night, the difference is clear.

Granted, HalloWishes has an advantage in pyro–what matters most–but there’s so much audio in HalloWishes that could be enhanced by projection mapping technology. 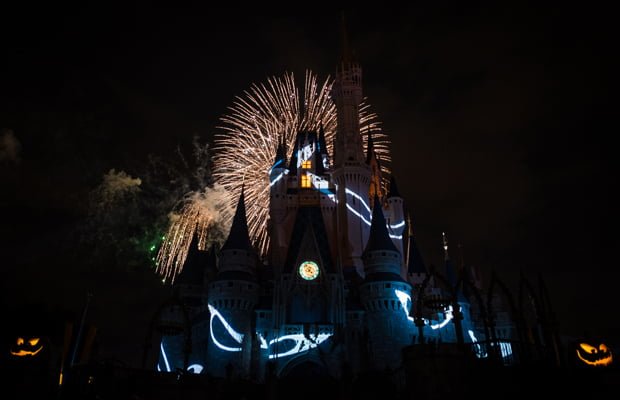 Now, I know I’ve criticized Walt Disney World’s over-reliance on projection mapping, but it could truly enhance the fireworks, rather than become a crutch for the show. If it provided moodiness to Cinderella Castle (as it does during Hocus Pocus), it’d be a nice plussing, and be a welcome update.

Personally, I hope that happens next year. I fear that sooner or later, HalloWishes will be replaced for being “dated” if it’s not updated, and I don’t think that’s what’s needed here. As with Boo to You, HalloWishes is so strong that I think there’s only one direction a replacement could go.

We’ll cover the Hocus Pocus Villain Spelltacular, second Boo to You Parade, and my overall feelings about this year’s Mickey’s Not So Scary Halloween Party on page 2…