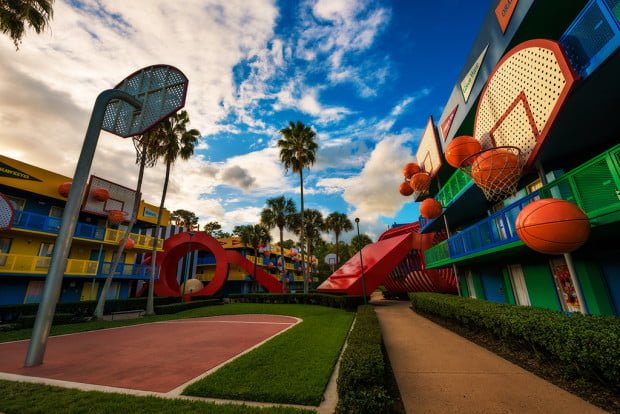 Disney’s All Star Sports Resort is a value hotel in Walt Disney World that is one of three hotels in the “All Star” lineup. In this hotel review, we’ll share photos of the refreshed rooms here, offer thoughts on whether All Star Sports is worth booking, and take a look at End Zone Food Court post-refurbishment.

All Star Sports is the most popular of these three hotels (and frequently has higher room rates for this reason), mostly because it is popular with middle school and high school athletic groups that travel to Walt Disney World for events at the ESPN Wide World of Sports.

While we feel All Star Sports has received a few nice upgrades since we first stayed here (this review was last updated July 4, 2017), there are still plenty of downsides to this hotel. As you will read in this review, if you’re planning on staying in a Value Resort during your Walt Disney World vacation, there are some good reasons to look elsewhere…

In terms of the general pros and cons of Value Resorts, if you’ve read our All Star Music Review or All Star Movies Review, there probably isn’t much new here for you to learn. Like I mentioned in both of those reviews, there is a love-hate relationship with Value Resorts among the Disney fan community.

Some people think they are dated, offering worse accommodations than a with poorly-made rooms, some people think they offer a cheap alternative to Deluxe resorts while still allowing Guests to take full advantage of on-property benefits. Although the Value Resorts are far from our favorite resorts, Sarah and I come down on the side of liking the Value Resorts for what they are.

Whether the Value Resorts are right for you comes down to the nature of your visit. If you’re taking a “the room is only for sleeping” type trip during which you want to be in the parks as much as possible, the Value Resorts are great because they’re sub-$100 night, but more importantly, they offers perks such as “free” Disney transportation and Extra Magic Hours.

By contrast, if you plan on spending a lot of time at your resort, and would like to be able to use a nice pool, eat at nicer restaurants, and enjoy other nice amenities, the Value Resorts may not be the best fit for your touring style. This goes for all of the Value Resorts. 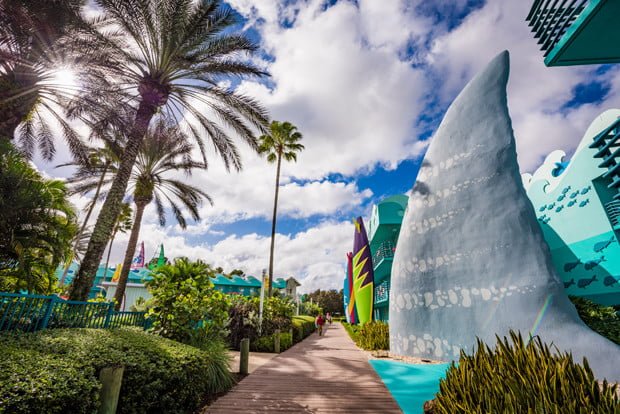 It will always hold a special place in my heart because it’s the resort at which Sarah and I stayed when we first went to Walt Disney World together, but I just don’t think the theme is quite as good as the other Value Resorts, at least as for us. If you have kids who love to toss around a football, things like the football field at All Star Sports make it a great choice.

Another reason it’s our least favorite, and something else to keep in mind when booking, is that if there are youth athletic tournaments at the ESPN Wide World of Sports Complex, chances are that the participants are staying at All Star Sports. This can mean loud and rowdy groups at All Star Sports.

We’ve seen some of these groups in the parks and on Disney’s Magical Express (and have heard horror stories about All Star Sports from others staying there the same time as them). For this reason alone, I doubt we would ever book All Star Sports again…it’s just too big of a “risk” for us. Consider consulting the ESPN Wide World of Sports Calendar before booking a stay at All Star Sports. 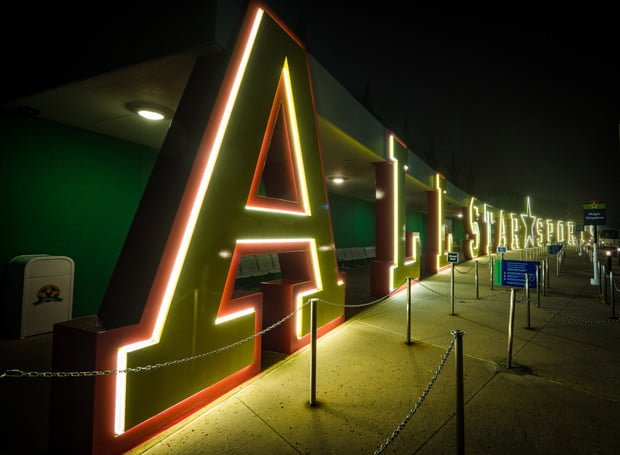 On the flip side, a big consideration that can make All Star Sports more appealing is that it’s the first stop on the bus loop when the All Star Resorts combine buses. This usually happens in the slower seasons of the year; if you’re visiting during one of these times of year, this is a really big deal, especially during early morning hours. 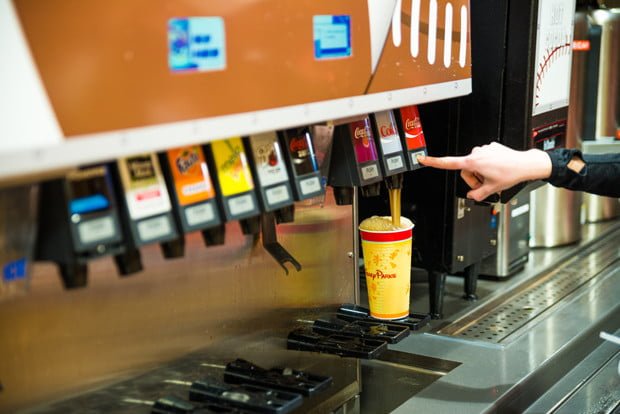 All Star Sports, like the rest of the All Star Resorts, has a lot of larger-than-life set pieces. Attached to the buildings, there are huge football helmets, tennis rackets, and baseball bats. Giant cones, Coke cups, and other things enclose stairwells. In courtyards between buildings, Disney characters engage in sporting activities. As mentioned above, there’s a very cool football field, complete with turf (no cleats, please!).

Despite the cool set pieces, All Star Sports has a decidedly early-90s feel. Photos of athletes in the lobby are heavily faded, and advertisements in the elevator are decidedly dated by the attire Cast Members are wearing in the ads. Why Disney doesn’t make the insignificant effort to update these telltale signs of aging is beyond me. It wouldn’t be costly. 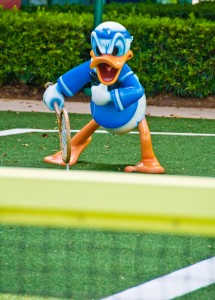 Personally, I’d love if Imagineering played it tongue-in-cheek with an update to All Star Sports. Instead of paying tribute to current greats, honor true American heroes like John Kruk. Heck, maybe have a “GOAT Mullets of Sports” gallery. They could even invite Jose Canseco and his Iron Man tortoise to the dedication for some nice synergy! 😉

The resort has a decidedly mid-90s vibe to it, particularly in the lobby and other common areas, which have not received the kind of attention as some other areas of the resort over the years. Additionally, there are far fewer amenities than any Moderate or Deluxe Resort, and is fairly far away from the Magic Kingdom, Epcot, and Disney’s Hollywood Studios.

The rooms pretty much speak for themselves. Here’s how they currently look: 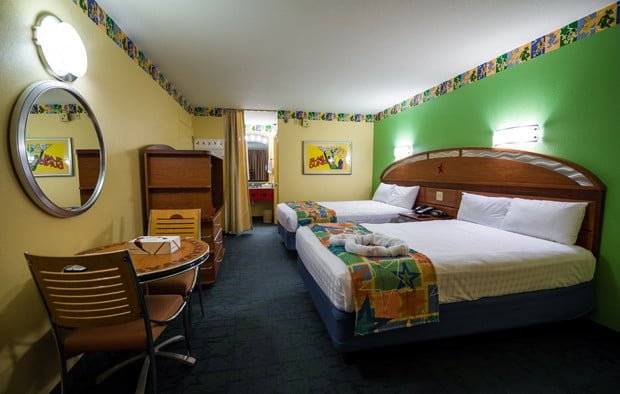 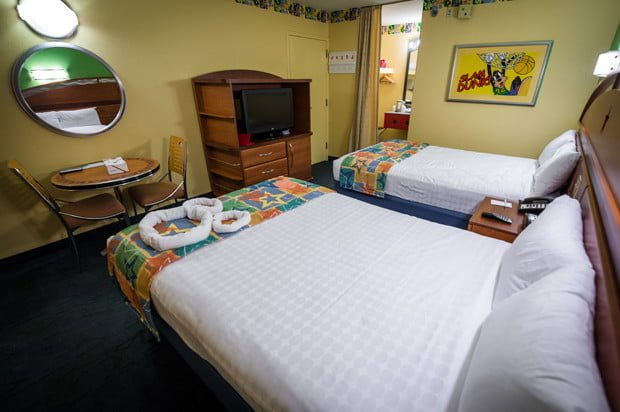 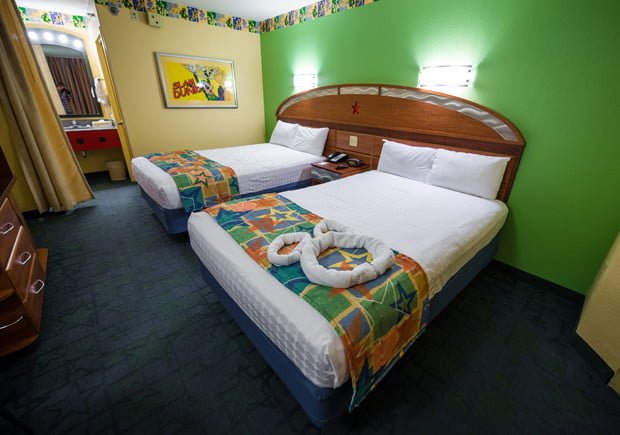 Utilitarian and small, but the plus side is that there are some nice Disney touches, and the rooms have been refreshed a bit over the years, so they are not too dated.

Okay, that’s a lot of negatives. There are still plenty of positives. First, All Star Sports is generally really cheap, particularly if you are visiting at a time when there’s not an event at the ESPN Wide World of Sports. In that case, PIN codes (read more about Walt Disney World’s Unique Offer Codes–and how to get them–here) and other discounts are routinely offered that bring the price of All Star Sports well below $100/night.

That might not seem particularly cheap for a basic motel, but when you factor in its on-site location, plus Disney’s Magical Express and Disney bus transportation (meaning no rental car!), plus Extra Magical Hours, plus MagicBands and priority FastPass+ booking, there are a lot of perks that come bundled in with that room price.

As with other Value Resorts, the pools are also generally fairly large and spacious. This is partly offset by the fact that a lot of people use them, but kids seems to love these pools. 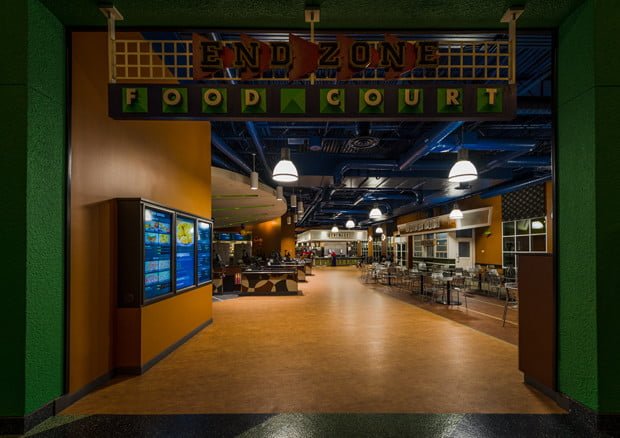 Another upside is that the End Zone Food Court has improved a lot in the last few years. The food courts at Walt Disney World’s Value Resorts used to be awful.

Now, they are all markedly improved, and have diverse menus with some good options. 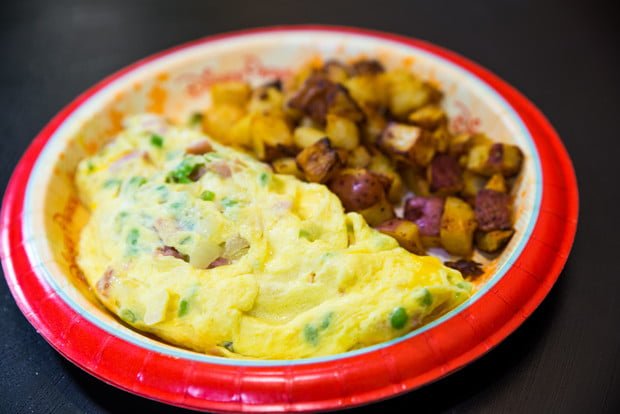 Don’t get us wrong–there’s still plenty of generic, uninspired cuisine on these menus, but there are also more ambitious items. For breakfast, the various made-to-order omelets are an improvement over the basic powdered eggs offered elsewhere.

For lunch and dinner, the Create-Your-Own Pasta station is a real winner. We’re also fans of the some of the rotating options at the Specialty Station. Sure, New York Strip Steak at a food court is not going to be the best you’ve ever had, but that, salmon, pot roast, and other choices are nice to have. 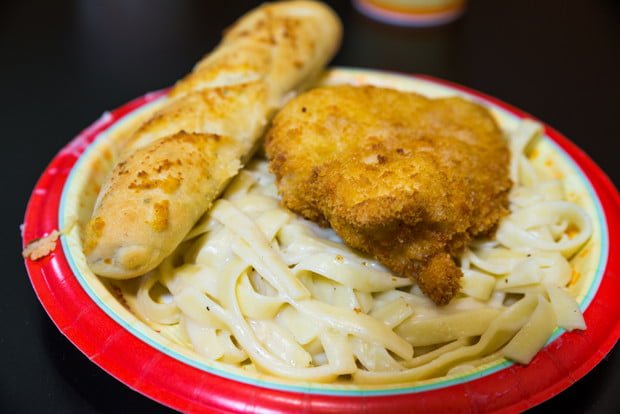 If it’s been a few years since you’ve stayed at the All Star Resorts, these upgrades to the food courts are probably the biggest difference that you’ll notice.

Overall, All Star Sports Resort features a fun design that kids will love, especially those who love sports. The Value Resorts are for everyone, as they certainly aren’t the “best” resorts at Walt Disney World. However, if you’re looking for a cheap place to stay while you’re at Walt Disney World, and you don’t want to rent a car or you do want to take advantage of Extra Magic Hours, All Star Sports is a solid choice. For the price and perks, you really can’t go wrong with All Star Sports if you primarily want to spend time in the parks.

Are you a fan of All Star Sports, or is it too basic for you? Have you stayed at All Star Sports during Pop Warner or another event at ESPN Wide World of Sports? Any other tips to share concerning All Star Sports? Where does it rank for you in terms of hotels at Walt Disney World? Do you prefer staying off-site? Hearing from readers is half the fun, so please share your thoughts in the comments!