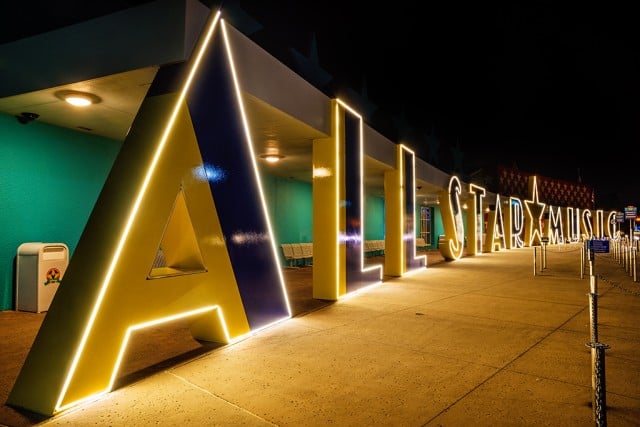 Disney’s All Star Music Resort is a value hotel in Walt Disney World that is one of three All Star hotels, along with Sports and Movies. This review features room photos, observations about the hotel, and who might prefer staying here during their Walt Disney World vacation. Music generally seems to us like the least popular of these (based upon our highly unscientific observations), and is also quieter as it generally sees fewer groups (this doesn’t mean it sees no groups).

The All Star Resorts are typically the cheapest way to stay on-property at Walt Disney World, which many guests like because it allows them to take advantage of on-property perks. As you will read in this review, this comes with some trade-offs, but we are generally in favor of All Star Music, so long as you have reasonable expectations for it and are comfortable with what you’re getting–or aren’t getting.

Whether the All Star Resorts are right for you comes down to your goal and expectations. If you’re taking a commando-style, “the room is only for sleeping” trip during which you want to be in the parks as much as possible, the All Star Resorts are great because they’re often less than $100 night. Essentially, the Value Resorts are all standard rooms that cater to parties looking to experience Walt Disney World on a tight budget while still enjoying the full on-site experience, including benefits like Disney’s Magical Express, Extra Magic Hours, and “free” Disney transportation.

The All Star Resorts are each also good for those with kids who will be intrigued by the concept of the resort (music, movies, or sports) and will like the larger than life icons. As is the case with all Walt Disney World on-site hotels, All Star Music is fully integrated in the MyMagic+ system, which means that guests receive MagicBands and can make FastPass+ reservations. Learn more about this in our MyMagic+ FAQ.

By contrast, if you plan on spending a lot of time at your resort, and would like to be able to use a nice pool, eat at nicer restaurants, and enjoy other nice amenities, the Value Resorts may not be the best fit for your touring style. Likewise, if you want to save money and will not utilize those perks mentioned above (especially true if you’ll be renting a car), you will likely save more money in accommodations of similar quality off-site. This is true for all of the Value Resorts. For more on what might be right for you, check out our comprehensive On-Site v. Off-Site Hotels at Walt Disney World article.

If you’ve read our Disney’s All Star Movies Resort Review or Disney’s All Star Sports Resort Review, this review doesn’t really bring much new to the table, besides showing some minor differences. Like I mentioned in that review, the Value Resorts are incredibly divisive in the Disney fan community. Some people think they are tacky and cheap, offering worse accommodations than comparably-priced off-site hotels, while other people think they offer a cheap alternative to Moderate and Deluxe Resorts that allow Guests to take full advantage of on-property benefits.

Although the Value Resorts are far from our favorite resorts, we come down on the side of liking the Value Resorts for what they are. We frequently stay at them on short trips when the parks are our main priority and we want the perks of being on-site. We also think they’re fairly fun in terms of their style, especially for kids.

With all of that said, let’s take a look at All Star Music… 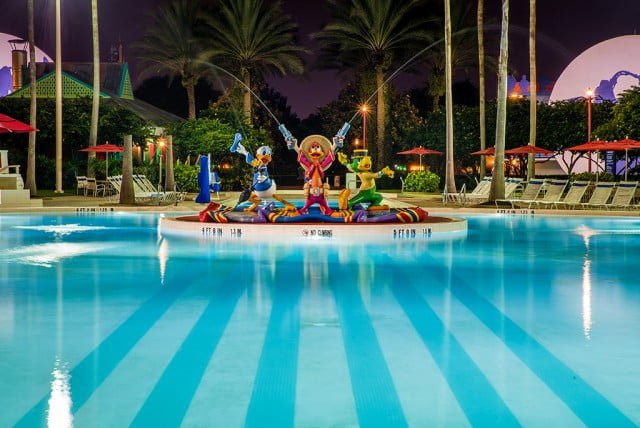 In terms of the grounds themselves, Disney’s All Star Music Resort is my favorite of the All Star Resorts. For one, I really like the main Guitar Pool, with this Three Caballeros centerpiece. 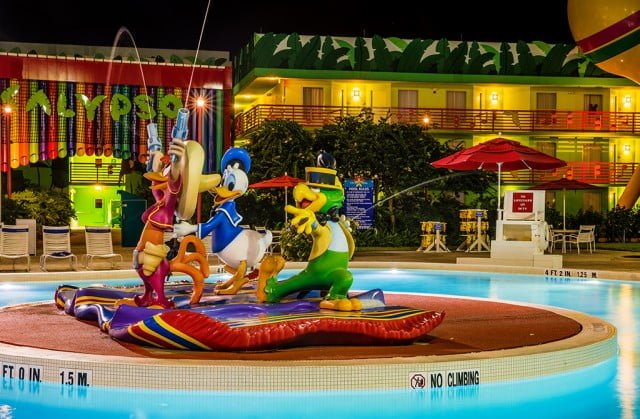 Beyond this Three Caballeros thing in the Guitar Pool, I like the layout of All Star Music, some of its icons, and the background music (which is unsurprisingly more prominent at a music resort than the other Value Resorts). I really love walking around All Star Music late at night or early in the morning when no one else is around. It feels more peaceful and relaxed than the other All Stars. This may seem like a little thing, but the Value Resorts are so comparable to one another that it takes “the little things” to separate them in terms of quality.

As far as other amenities go, there’s the Intermission Food Court, which has a variety of stations for different types of food (plus the ever-popular RapidFill refillable mugs), a small playground, a game room, and shopping. So basically, it’s exactly like the other All Star Resorts in this regard. Intermission Food Court was overhauled a couple of years ago and now offers more variety, better quality, and nicer seating. It’s still not the paramount of Walt Disney World dining, but it’s better than it once was.

Walt Disney World transportation is always hit or miss, and this is especially true at the All Star Resorts, which share buses with one another and usually have high demand. All Star Music is the second bus stop (after All Star Sports and before All Star Movies), so usually buses won’t skip it, but they sometimes will if they fill up at All Star Sports. Many times they are standing room only when they arrive at All Star Music; this occurs mostly during busy hours. 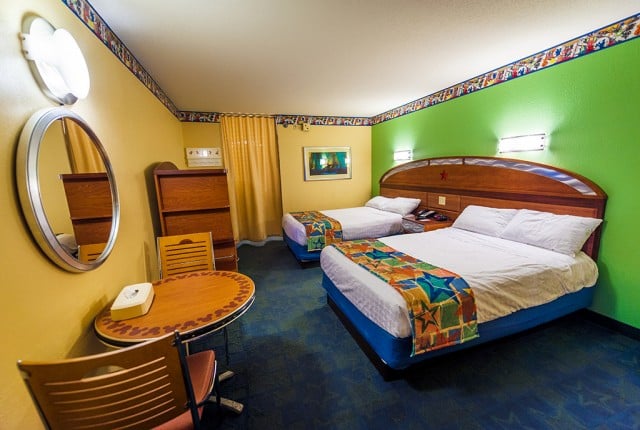 Here’s a view of the room from the far side. As you can see, it’s very…basic. It has some Disney flourishes, but let’s not kid ourselves, this room is about on par with a mid-tier roadside motel. Not that there’s anything wrong with that. If you want to stay on-site for minimal cost, or don’t plan on being in your room much, it gets the job done.

When we are on a quick weekend trip that is park-centric, this is absolutely all we need. However, I would not recommend it for a weeklong Walt Disney World honeymoon where you…uh…might want to enjoy the room a bit more. 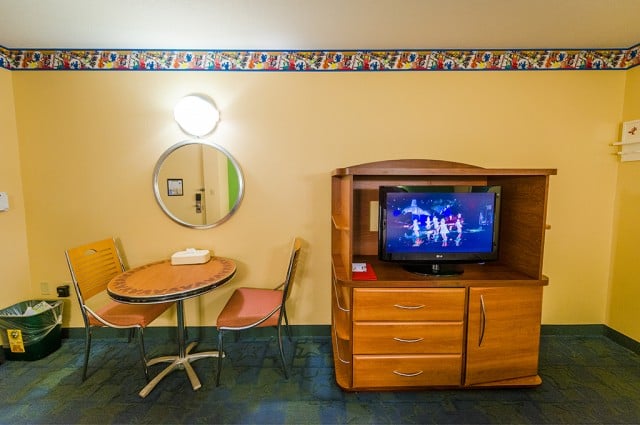 A look at the TV and table. The All Star rooms were refurbished fairly recently, so now they have in-room mini-fridges and LCD televisions. 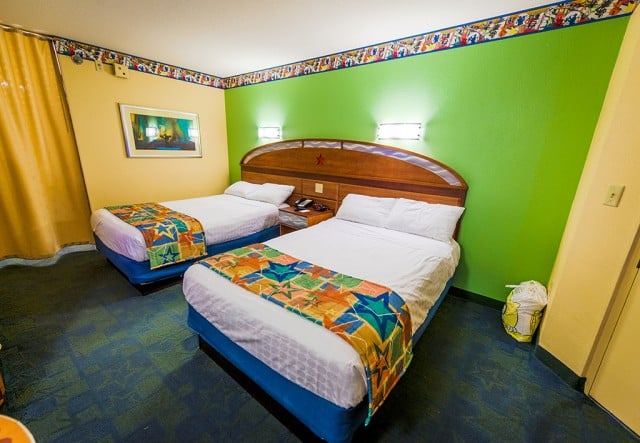 The bedding also received an upgrade during the last refurbishment. It’s still fairly standard, but the shift from a very busy comforter to the textured white is a nice change. 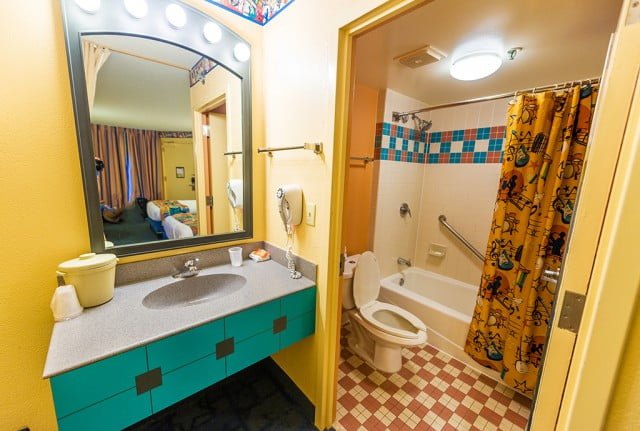 A look at the bathroom area. Fairly standard Value Resort setup here with the toilet, tub and shower separated from the single sink. 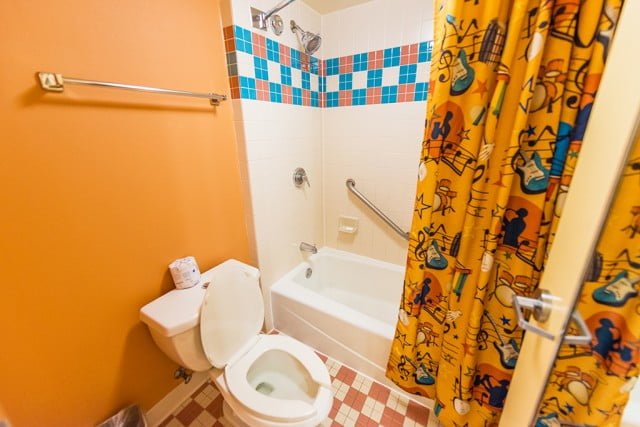 The shower curtain reminds guests of where they are staying. Otherwise, a very utilitarian, but perfectly serviceable bathroom. 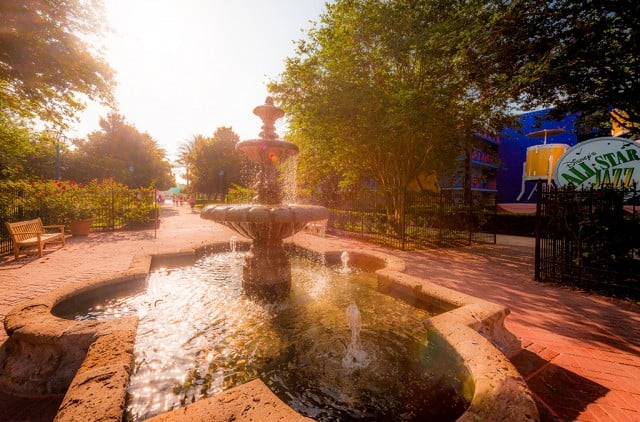 This little fountain and garden-ish area is fairly nice, and to my knowledge, atypical of the Value Resorts. If you sit on the right bench here and ignore the giant drum set in the distance, you almost feel like you’re at Port Orleans Riverside instead of an All Star Resort! 😉 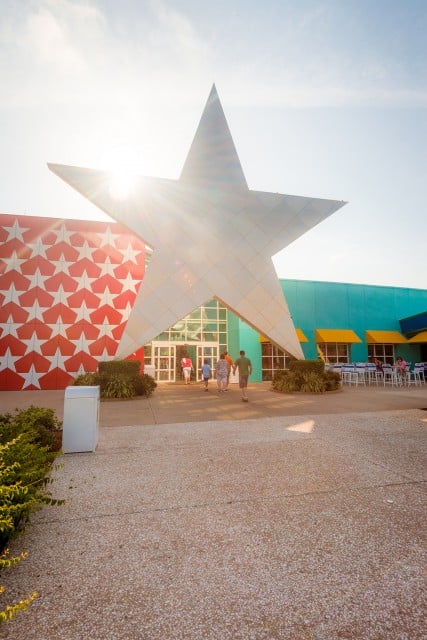 Overall, Disney’s All Star Music Resort basically “is what it is.” The Value Resorts are divisive to begin with, and you will probably know right away by looking at the photos in this review–and not even reading a single word–whether All Star Music is down your alley or not. To be sure, the Value Resorts are not for everyone, but they do serve a role, and are especially popular with families and commando vacationers. With the opening of Art of Animation Resort and the superiority of Pop Century, the All Star Resorts are now mostly overlooked. However, that should not necessarily be the case. All Star Music is typically cheaper than both Pop Century and Art of Animation, and usually has better discounts, too. There’s a lot to be said for that, and if you’re looking to spend as little as possible but want to stay on-site at Walt Disney World, All Star Music is a good option for you.

Do you love Disney’s All Star Music Resort or are the larger than life icons of the Value Resorts not your style? If you’re a fan, why do you like it? If you’re not a fan, why not? Planning on staying here? Share your thoughts in the comments!