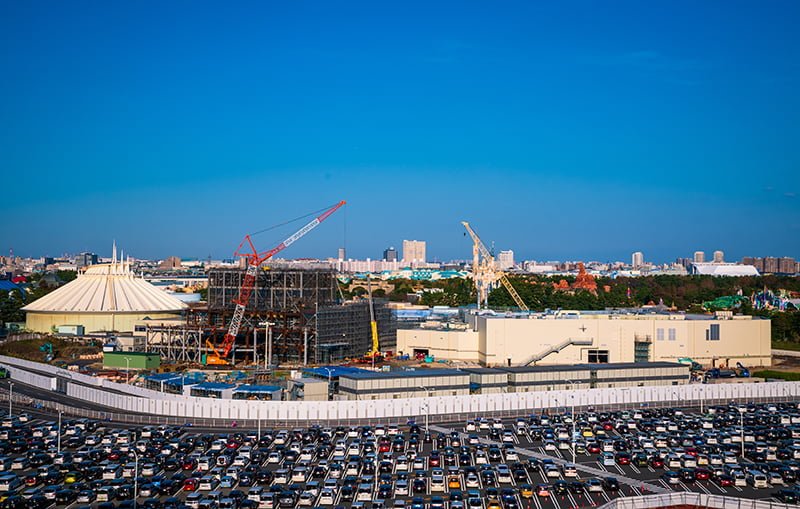 Progress continues at a brisk pace on the Beauty and the Beast mini-land, with towers on the new castle starting to rise, the Be Our Guest trackless dark ride building totally enclosed, and the smaller buildings for the Big Hero Six ride, and Minnie’s design studio also starting to take shape. In this Tokyo Disneyland construction report, we’ll share photos of the work, and commentary about what it means if you’re planning a visit.

As we’ve previously noted, the fast pace here is to meet a Spring 2020 opening deadline ahead of Tokyo 2020 Summer Olympics. This is the most high-profile Tokyo Disneyland expansion ever; between the popularity of the characters being used for the attractions, the budget of the new area (and presumably, its future marketing efforts), and the natural draw of the Olympics, there should be a huge spike in attendance once this (mostly) Beauty and the Beast Tokyo Disneyland expansion debuts.

This project, along with the ongoing Soaring: Fantastic Flight work–and the huge expansion of FantaSea Springs, consisting of new Frozen, Peter Pan, and Tangled mini-lands (plus a new hotel)–over at Tokyo DisneySea mark the largest 5 year expansion at Tokyo Disney Resort ever, save for when each of the two parks first opened. In this update, we’ll take a quick look at how Beauty and the Beast village construction is progressing, along with the new turnstiles at Tokyo Disneyland.

We’re pretty excited about everything happening at Tokyo DisneySea–we saw artists painting the facade of ‘Soaring: Fantastic Flight’ and a lot of work happening around Bayside Station for the FantaSea Springs expansion–but we’re going to focus solely on the Beauty and the Beast Fantasyland/Toontown/Tomorrowland project here. We’ll be back with another post containing updates from Tokyo DisneySea.

Let’s start by taking a look at the backside of the Beauty and the Beast land, with “aerial” photos shot from our 11th floor balcony at Maihama Bay Club Resort. 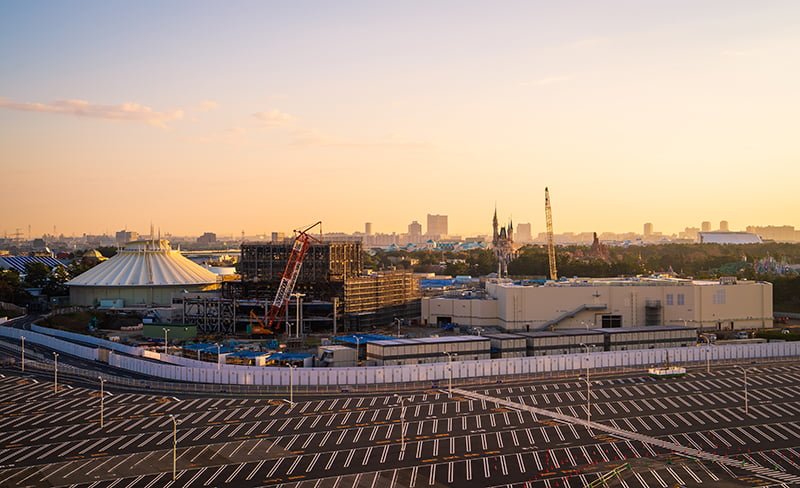 The left structure you see, near Space Mountain, is the new theater. Work continues on the exterior here, with significant vertical construction since our last update.

I was actually a bit taken aback to see just how tall this building is. Granted, part of that is the perspective (it’s closer than other structures in these photos), but it’s still pretty all from inside the park. 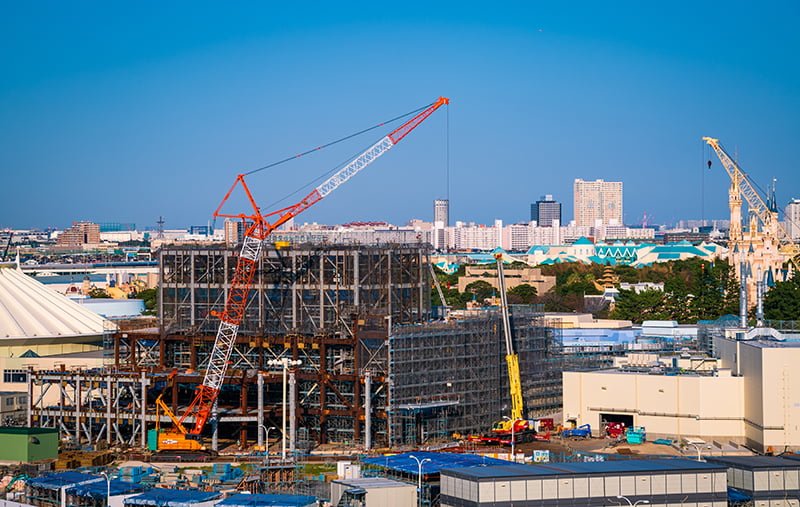 This shouldn’t really be a surprise, as the Broadway Music Theatre at Tokyo DisneySea is roughly the same height, and the model of this expansion project shows a really tall theater concealed by mountains.

It’ll be interesting to see where this is located in relation to the FantaSea Springs attractions, as it’s going to take some rock-work to conceal from the DisneySea side, too. 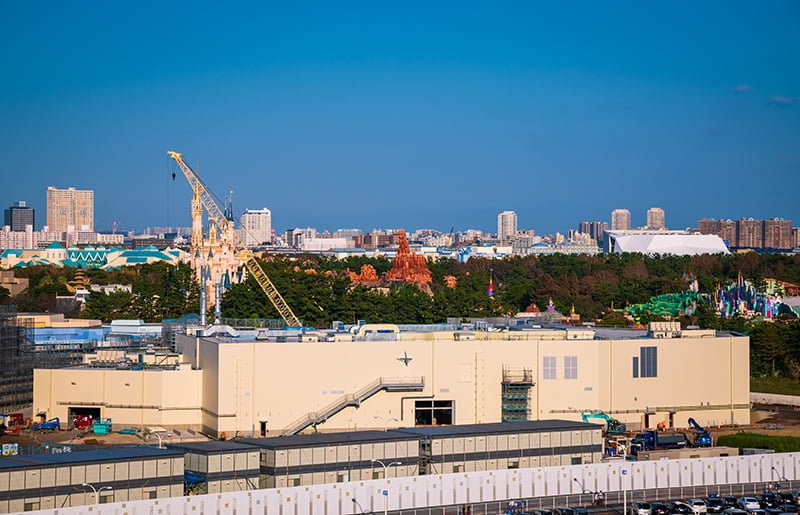 To the right, nearer Toontown, is the show-building for the Be Our Guest trackless dark ride. Since our last update, not much has changed on the outside.

This massive building was topped out and fully enclosed over the summer, and presumably internal work on this groundbreaking new attraction has been occurring for a while now. 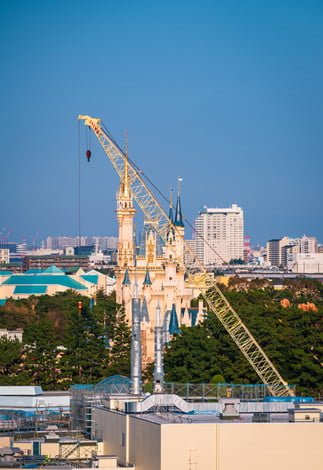 The one noteworthy, and exciting, development here is that two spires are rising atop the front of this show building to form the unmistakable form of a castle. We’re actually slightly surprised that Beast’s Castle is being erected this early into construction, but perhaps Disney or OLC are considering that free marketing?

Everyone walking through Tomorrowland can see the beginnings of that castle rising above the construction walls, and once it takes a more fully-formed shape, it’s going to start garnering more attention. Seeing Beast’s Castle is a pretty effective way to convince guests to plan return visits! 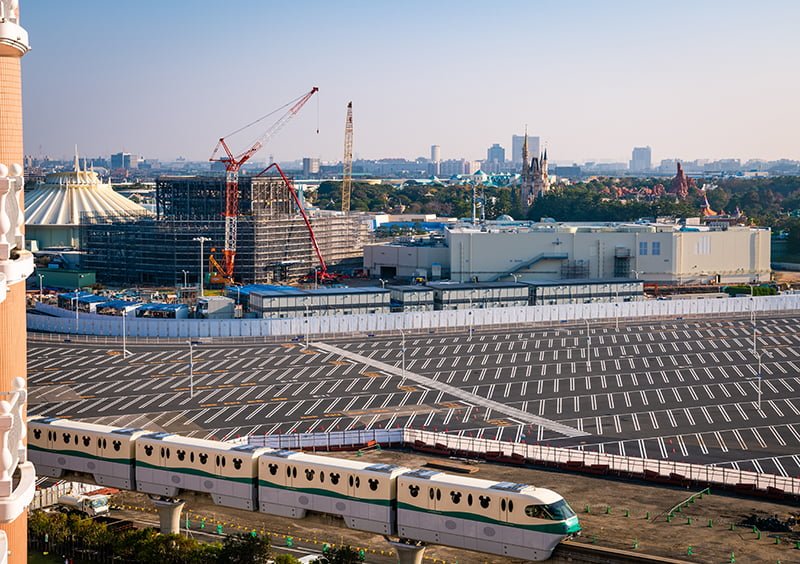 Not to go on a tangent, but these photos were all taken from our room at Maihama Bay Club Resort, where we stayed twice this trip to Japan (once for the end of Halloween and once for the start of Christmas), paying an average of $134/night. Both times we had standard rooms with a better view of Cinderella Castle than a theme park view room at Disney’s Contemporary Resort in Walt Disney World. (Read our Tokyo Disneyland on a Budget post for money-saving info.)

The FantaSea Springs expansion is going to be built largely in the parking lot between the theme parks and Bayside Station monorail hotels, meaning the theme park views available at these third party hotels will soon be even better. While the hotels lack Disney themes (and a couple are dated), they are all Deluxe caliber, and the Sheraton and Hilton properties have both had recent refurbishments. Just something to consider if you’re pricing out a Tokyo Disney Resort trip. 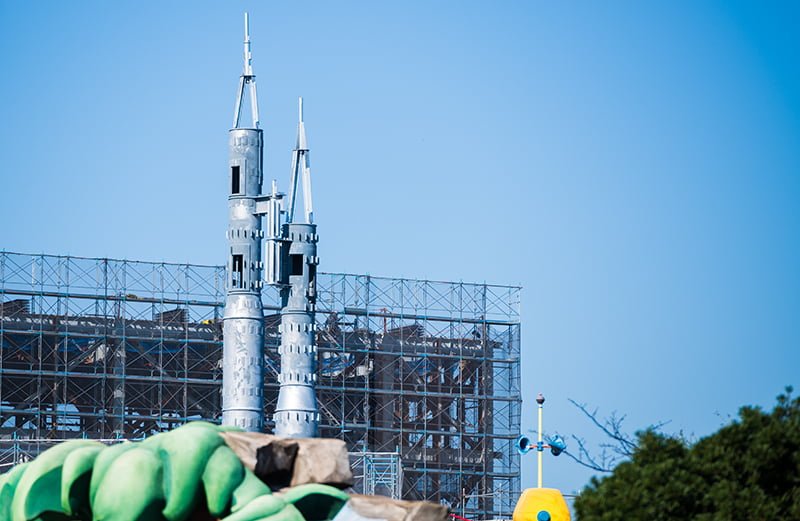 Within Tokyo Disneyland, walls remain up in Tomorrowland, and on the edges of Toontown and Fantasyland. Even on busy days, this never really caused any congestion. Tokyo Disneyland has super wide (too wide) walkways in this area of the park, so walls eating up some of that space isn’t as big of a deal as it’d be elsewhere.

As for how all of this work will impact your visit to Tokyo Disney Resort: it won’t. At least, once you’re inside the park. Outside the park, between the Tokyo Disneyland monorail station and turnstiles is a different story. 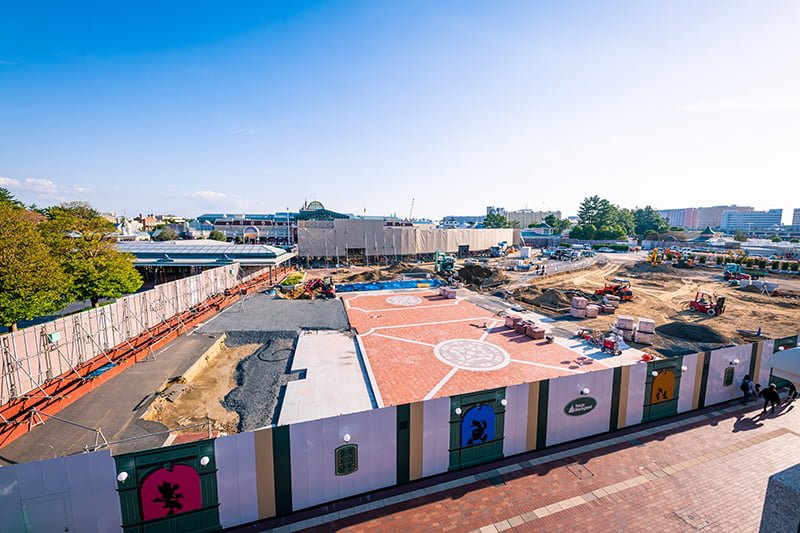 The maze of walls to enter Tokyo Disneyland is minor, so it’s not like the current Bus Stop Half Marathon at Disney’s Hollywood Studios in that regard. However, there are fewer turnstiles operating than normal, so the lines to enter the park are longer than normal.

During our last few trips, we’ve experienced this, and it has meant rope drop waits of around 10-15 minutes to enter the park on weekdays. As repeat visitors with no particular agenda, we’ve started delaying our visits until around 20 minutes after rope drop, at which time the lines pretty much clear out entirely. This strategy is definitely not recommended if it’s your first time visiting Tokyo Disneyland. To the contrary, we’d suggest arriving earlier than normal to beat the crowds.

That’s about it from Tokyo Disneyland. We’re really looking forward to the Beauty and the Beast attraction and the expansion to Fantasyland coming with it, and it’s nice to see visible progress with each visit to Japan. While there’s still no official opening date set for these additions, we’ll be keeping a close eye on this project, as we hope to time a visit to Tokyo Disneyland to coincide with the soft opening of the Beauty and the Beast mini-land in Spring 2020.

Are you looking forward to this Beauty and the Beast/New Fantasyland expansion at Tokyo Disneyland? Do you have high expectations for the Be Our Guest trackless dark ride? Looking forward to the new theater, and whatever show it brings with it? Any questions? Hearing your thoughts and feedback is interesting to us, so please share below in the comments!