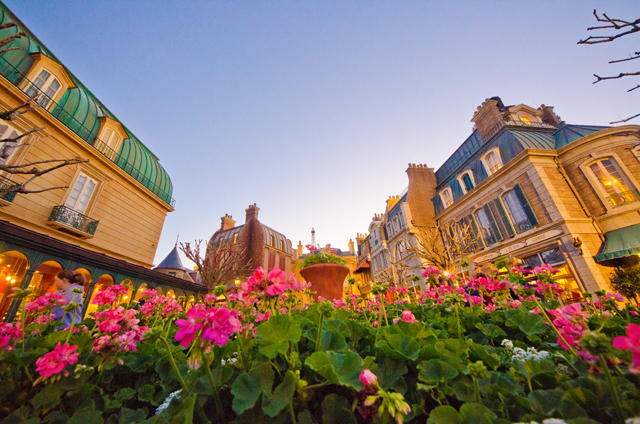 Bonjour! Bistro de Paris is located in Epcot’s World Showcase in the France pavilion and is one of Walt Disney World’s best signature restaurants. In this review, we’ll share food photos, thoughts on the experience, and more.

Bistro de Paris has quite an interesting history. In his review of Bistro de Paris on the Disney Food Blog, published EPCOT Center historian R.A. Pederson details this history. I can’t do history better than him, so check out the beginning of that review for some historical background.

In present day, Bistro de Paris looks as if it’s a relic of classic EPCOT Center. Not in a bad 1980s-carpet-on-the-walls sort of way, but it’s as if the restrained elegance once found throughout Walt Disney World has not disappeared from Bistro de Paris. Yet. 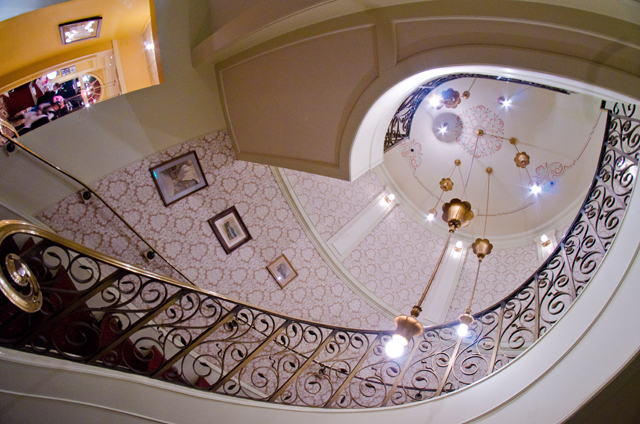 Perhaps this is partly due to the fact that Bistro was one of the last Disney Dining Plan holdouts (a plan that some have alleged has lowered the menu quality of participating restaurants) or perhaps because its somewhat secluded location has made demand lower than other restaurants, thus not necessitating a lowering of the bar.

Whatever the case may be, Bistro de Paris is a substantial departure from most in-park dining. As we walked up the steps to the opulent dining area, I could envision the place looking largely the same in the mid-1980s, with the possible exception of guests wearing sport coats and slacks instead of polos and sweaters.

Sarah and I rarely under-dressed when dining at Walt Disney World, but with me in only a polo and jeans, I felt decidedly under-dressed in this restaurant. Other guests were similarly dressed, but given the tuxedos of the wait staff and general ambiance of the restaurant, it just felt like we should be wearing more. 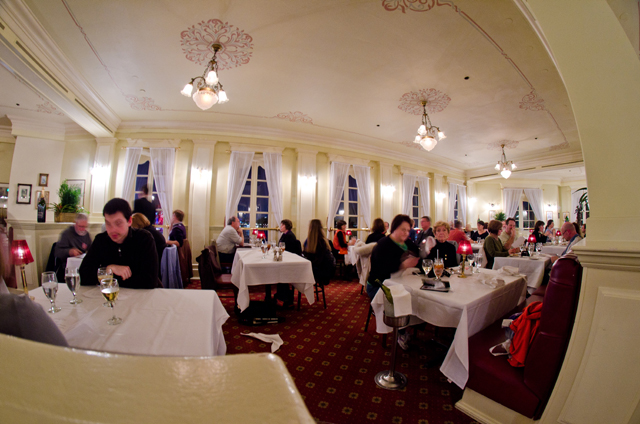 The decor in Bistro de Paris is not what you’ll find in many Walt Disney World restaurants. Although elegant, this elegance is achieved through subtle details and a refined less-is-more color palette and design scheme.

The look is achieved through accenting details, fixtures, and quality woods and fabrics rather than ostentatious decor. The result is a restaurant that is beautiful, but quite different than your typical contemporary Disney theming. 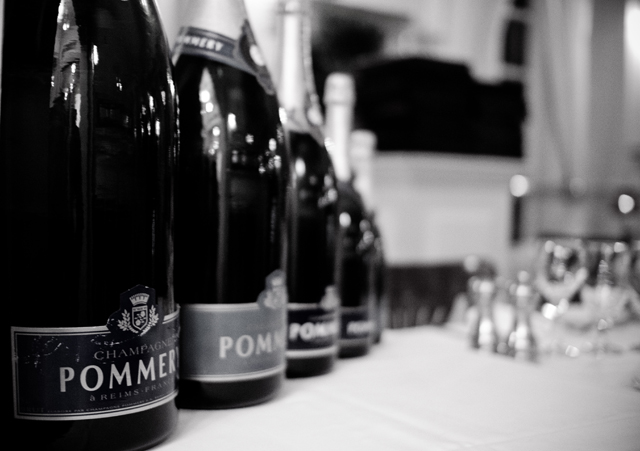 Bistro de Paris is rarely booked solid (we booked our reservation the day of), making it easier to request and receive a window table if you’re a party of two (we forgot to do this, d’oh!).

This is great no matter when you’re dining at Bistro de Paris, but is especially wonderful if eating during Illuminations. The second story view of the show is great. 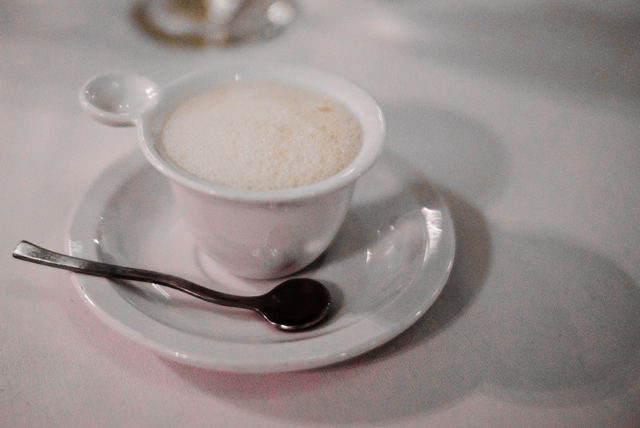 We ordered from the Prix Fixe menu of the restaurant, with our meal starting with an amuse-bouche of light Parmesan soup compliments of the chef; this soup was amazing with incredible flavor despite its airy nature.

It was an excellent precursor for the meal to come. 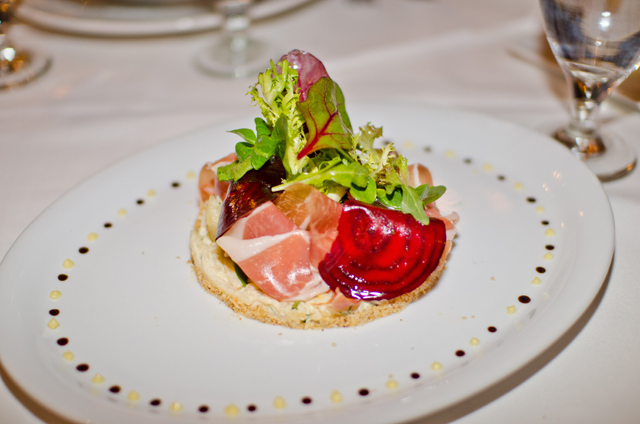 For appetizer, I ordered the Serrano Ham with celery root remoulade and green asparagus and Sarah ordered the Butternut Squash soup with chestnuts and shrimp. I wasn’t quite sure of what to expect from my mix of Serrano Ham (which I love) with the selection of greens (which I’m indifferent towards), but the result was excellent.

The greens had a surprisingly great flavor, and the ham was obviously excellent, but the The celery remoulade was the star of the show. It complimented the rest of the appetizer well, and was the anchor, of sorts, that held it all together. This appetizer was amazing, truly one of the best I’ve had at Walt Disney World. 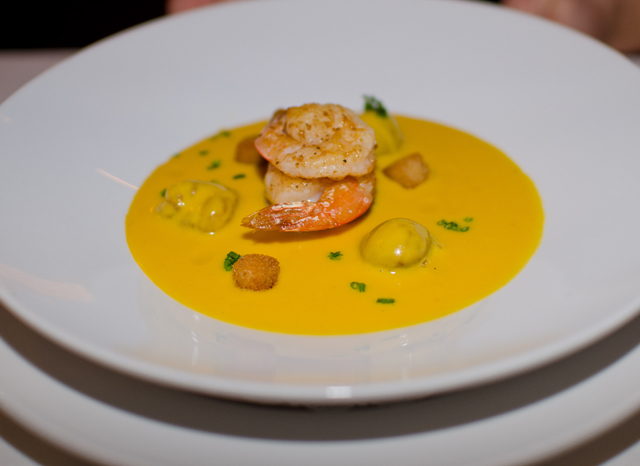 This soup was rich, but not too rich, and the shrimp were a great, and interesting, touch. I preferred my Serrano Ham to the tastes of her soup that I had, but I’m not generally one to order soups as appetizers. If you enjoy soups, I’d certainly recommend it. 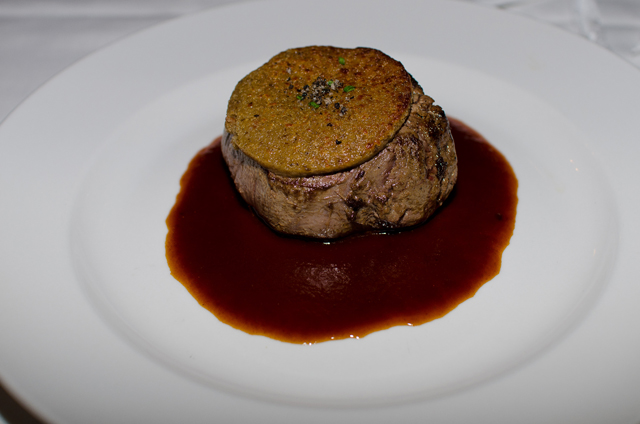 For our main courses, I had the Grilled Beef Tenderloin with mushroom crust, mashed potato, and Bordelaise sauce; Sarah had the Seared scallops with Radicchio risotto. My beef tenderloin was out of this world. The cut was tender and perfectly cooked, exactly what you’d expect from a great tenderloin.

The Bordelaise sauce was a nice compliment, and there was no overpowering seasoning or over-salting, which is an issue with some Disney steaks. The real star of the entree, though, was the mushroom crust. As someone who loves mushrooms, this was what really made the tenderloin stand above a normal great tenderloin.

The mushroom crust had great flavor with a certain richness that gave each bite a wonderfully complex mix of flavor. It perfectly complimented the tenderloin, and is an entree I would highly recommend. Normally when we return to Disney restaurants I try to order different dishes to test the whole breadth of the menu, but at Bistro de Paris, I doubt I’ll ever be able to try anything beyond the tenderloin.

It was one of the best entrees I’ve ever tried at Walt Disney World. The side of potatoes was decidedly unimpressive–they were actually some of the worst Disney potatoes I’ve had as they tasted like instant potatoes–but this was easily forgivable given the standout quality of the tenderloin. 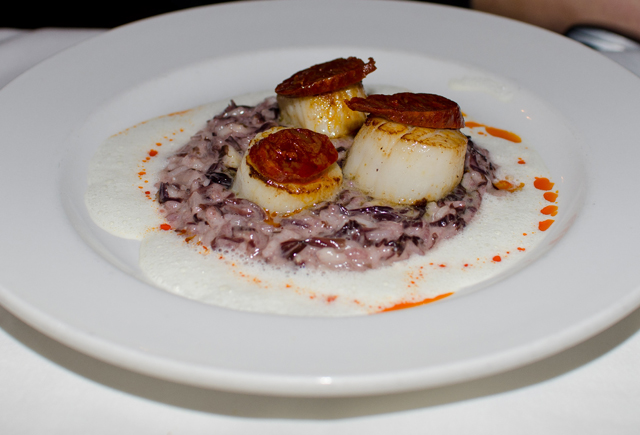 Sarah’s scallops were also impressive. The scallops were slightly sweet but were incredibly tender, and split effortlessly with a little pressure from a fork.

The risotto offered a nice compliment to the scallops. I much preferred my tenderloin to the scallops, but even the best scallops in the world probably wouldn’t stack up to that tenderloin. 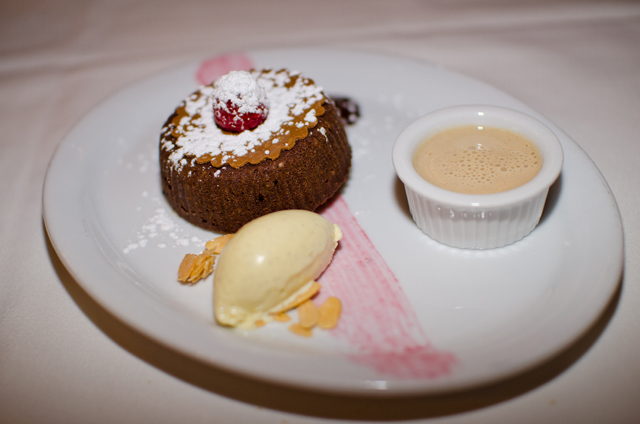 For dessert, we split the Warm Chocolate and Almond Cake with feuilletine, vanilla ice cream, praline sauce, and the Blueberries flan caramelized, with vanilla Chantilly and red berries sauce.

Both of these desserts tasted really good, as you’d expect from a fine dining experience in France. A great conclusion to an excellent meal. 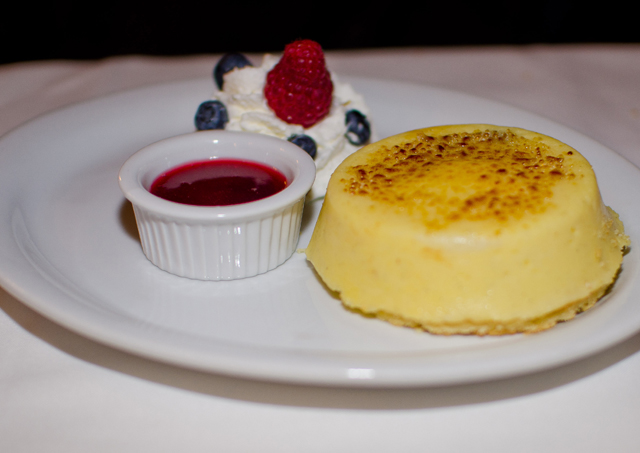 Overall, Bistro de Paris was incredible. Amazing. Even the excellent Hollywood Brown Derby, the restaurant at which we dined the following night, could not live up to the lofty expectations set by Bistro de Paris. It is now our favorite in-park restaurant, and is also in our top 5 U.S. Disney restaurants, overall. We have read some less favorable reviews of Bistro de Paris, but many of these seem to focus on price. This is a bit puzzling to us, as the Prix Fixe menu at Bistro de Paris consists of an appetizer, entree, and dessert for $59.

This may seem like a lot, but considering the prices of the average appetizer ($8-20), entree ($30-45), and dessert ($8-15) at Le Cellier or Hollywood Brown, the price is really quite reasonable. We have spent more at both Le Cellier and Hollywood Brown Derby, and while we like both of these restaurants, the quality of the cuisine at Bistro de Paris surpassed them both. Beyond that, as a “date night” restaurant, Bistro de Paris beats them both.

This is not to say children are not welcome at Bistro de Paris (it’s a theme park restaurant, after all), but with its low-key lighting, restrained decor, and menu (since we dined there, Disney Parks Blog has promoted its new kid’s menu, so perhaps Disney is trying to draw more families here), it doesn’t seem as family-friendly as most other Disney restaurants. This is one restaurant that we highly recommend without any reservations, and a place to which we’ll be back very soon.