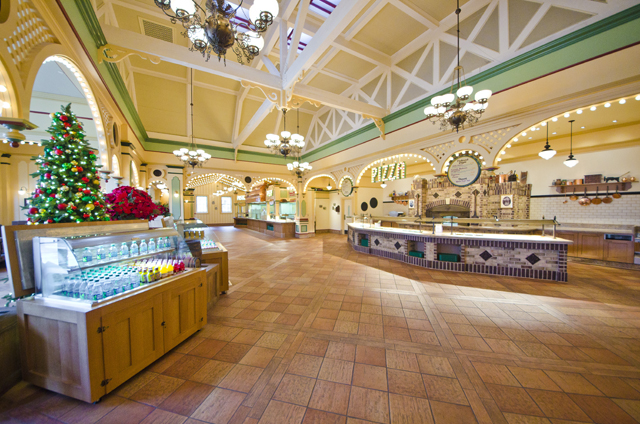 Boardwalk Pizza & Pasta is a counter service restaurant at Disneyland Resort in Disney California Adventure that serves Italian favorites with a California flair. The menu specialties of the restaurant include flatbread pizza, pasta dishes, and salads, all of which are prepared in on-stage kitchens. Boardwalk Pizza & Pasta was added to Disney California Adventure in the Paradise Pier land in 2011, replacing the eclectic Pizza Oom Mow Mow.

Besides the fact that both served some form of pizza, they have little else in common. To me, Pizza Oom Mow Mow was like Disneyland Resort’s version of Chester & Hester’s Dinosaur Treasures found at Disney’s Animal Kingdom in Walt Disney World. Dinosaur Treasures is incredibly tacky and over the top, but there’s just so much detail and delightful gags that…well, it’s still awful, but in fairness, they don’t serve pizza there and Pizza Oom Mow Mow did, making it infinitely better.

The look of Boardwalk Pizza & Pasta is in keeping with the rest of Paradise Pier, as Disney has scrubbed most of the remnants of the ostentatious and tacky Route 66 theming in favor of a more elegant Victorian look. This has largely been lauded by Disneyland commentators, and there is no denying that Boardwalk Pizza & Pasta is much more elegant than Pizza Oom Mow Mow.

Still, I still find myself missing Pizza Oom Mow Mow. It may have been tacky and over-the-top, but it was rife with character. (Okay, this is almost totally nostalgia for my first day in Disney’s California Adventure speaking, but just bear with me.) 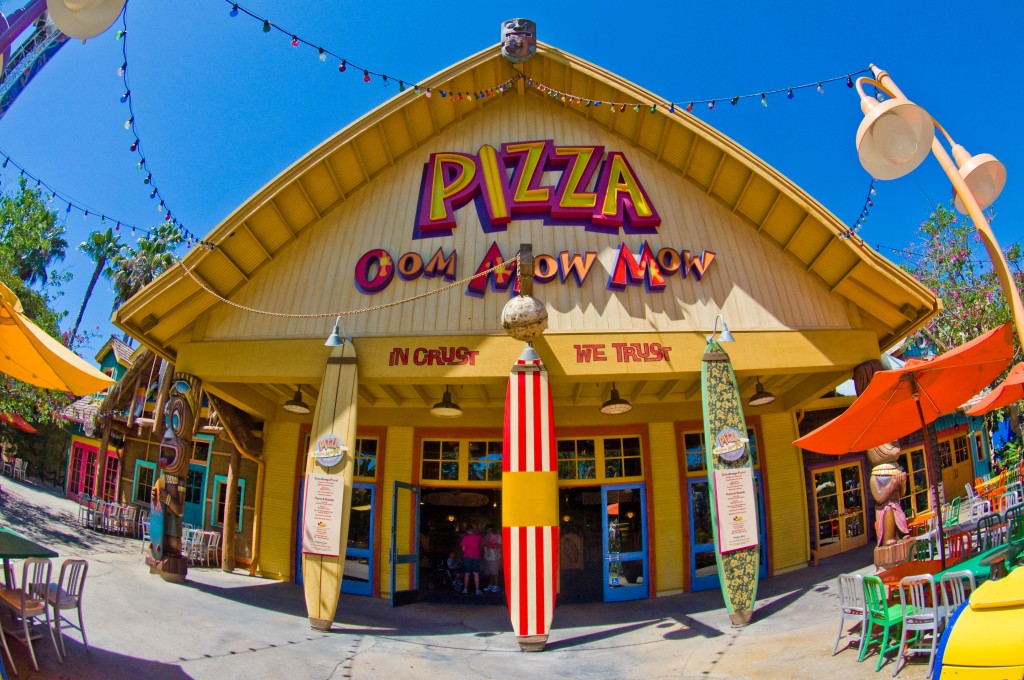 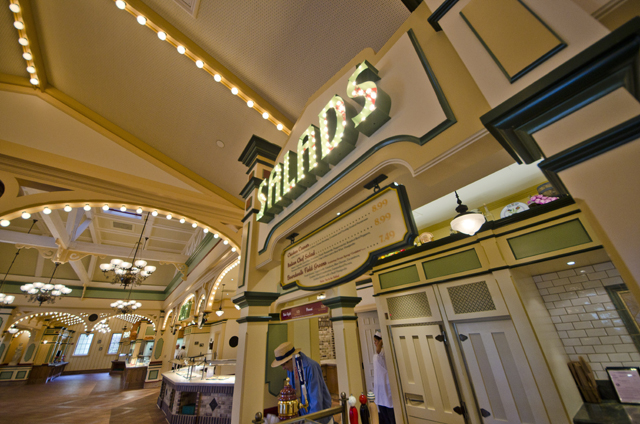 While Boardwalk Pizza & Pasta does have on-stage kitchens, don’t let this angle fool you into thinking that the food here is fresh. It sits out under heat lamps after it’s prepared, and business is often very slow at Boardwalk Pizza & Pasta, meaning that food can be sitting out for a while before it’s purchased. When we first visited Boardwalk Pizza & Pasta, it was close to noon on a weekend, and no one else was in the restaurant. It was so empty that I was able to take the interior photos accompanying the review here. (Update: in visits since the opening of Cars Land, it seems that this is no longer a problem.) 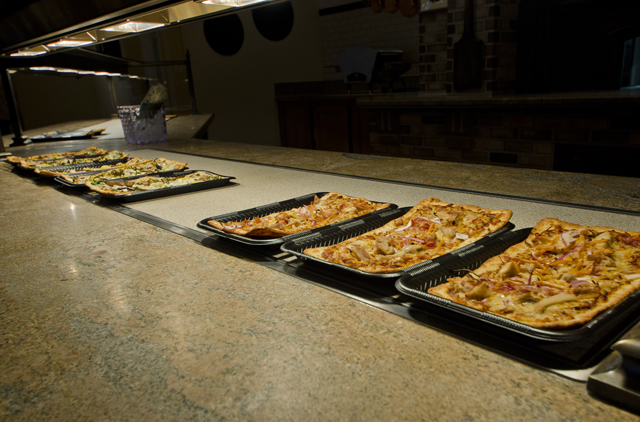 When we finally did eat here on a weekend evening, it was busier, and our food was fresh. Sarah ordered the Chicken Sun-Dried Tomato Pasta, which she liked, but was not crazy about. To me, it seemed similar to the pasta we tried at Redd Rockett’s Pizza Port, but it wasn’t quite as good as the pasta there. Still, not bad. Redd Rockett’s Pizza Port is pretty bad for anything but that pasta, so definitely opt for this place unless everyone in your party wants pasta. 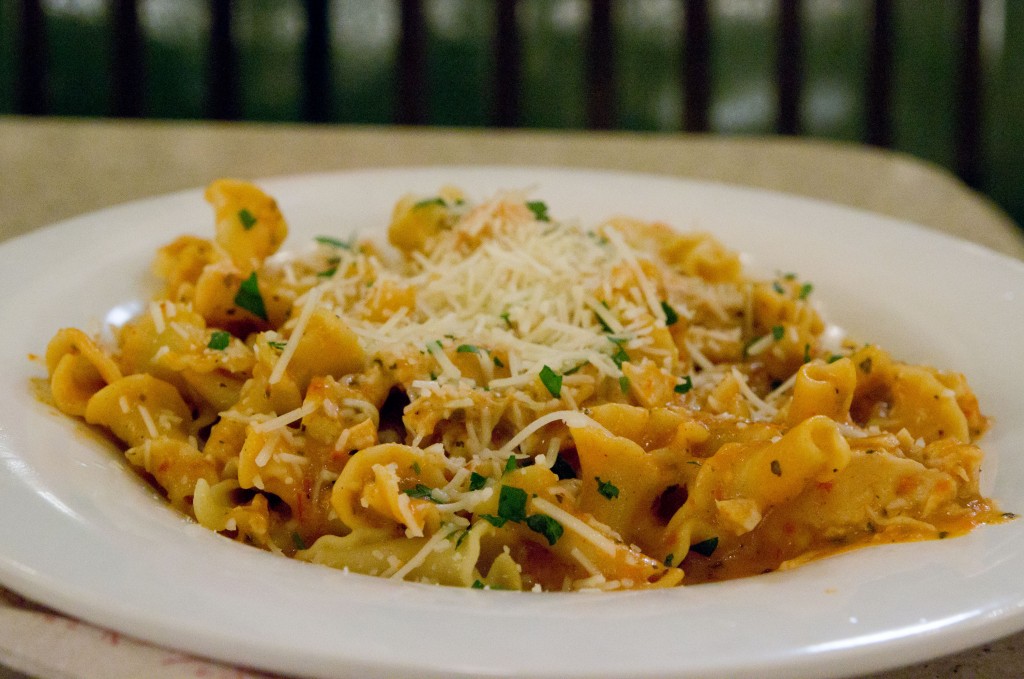 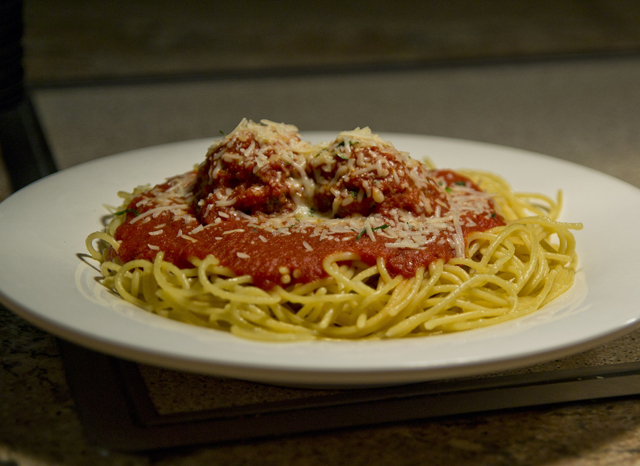 I opted for a flatbread, of which there are several varieties. Most of them looked pretty good and fresh, but I’m a sucker for mushrooms, so I ordered the Portobello Mushroom and Spinach flatbread. It was pretty good, with flavorful (and plentiful as compared to the other flatbreads) cheese and mushrooms that were surprisingly good. 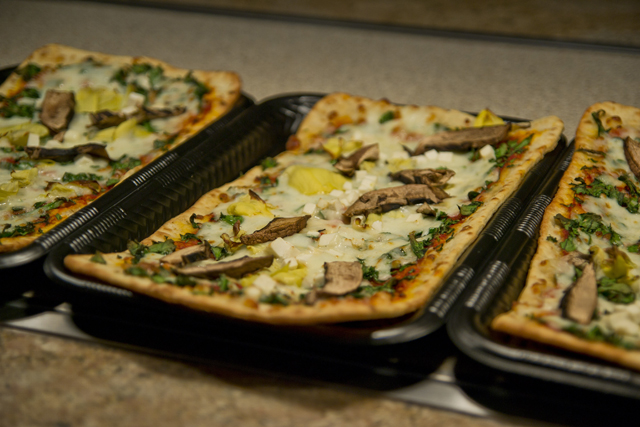 I don’t know what Disneyland has done with its flatbreads, but between Village Haus and Boardwalk Pizza & Pasta, it’s as if you’re receiving table service (appetizer) quality flatbreads at counter service restaurants. This is a marked improvement from even 2010. 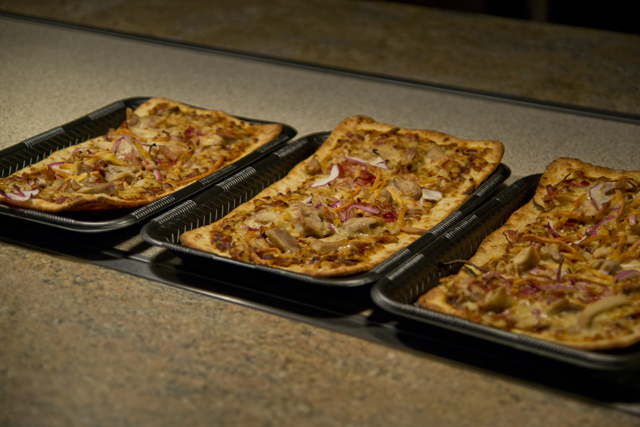 There are a lot of fans of Boardwalk Pizza & Pasta who think I was initially a bit hard on the restaurant in this review. After eating at Boardwalk Pizza & Pasta a few times after initially writing this review, I have to say to an extent that might be true. It has grown on me over time, although I still prefer Paradise Garden Grill if I’m in the area. 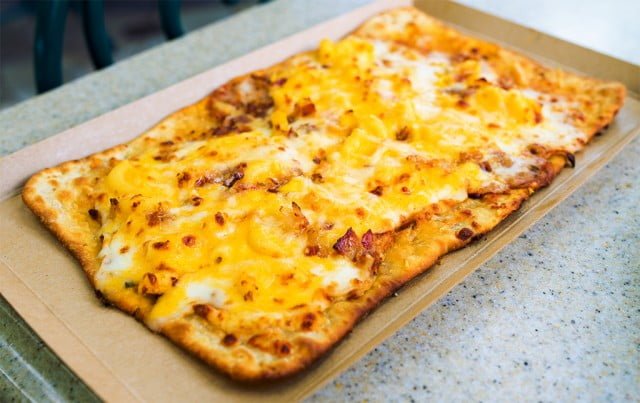 I still didn’t love the restaurant until the Monstrous Summer All-Nighter event. On that fateful day, Boardwalk Pizza & Pasta offered a Mac & Cheese Flatbread. I know what you might be thinking…it sounds disgusting. Fellow patriot Guy Selga and I thought the same thing. BUT WE ATE IT ANYWAY.

Ever wonder what the culinary equivalent of Robocop flying a unicorn around a volcano while rocking out to Led Zeppelin and shooting down flying dinosaurs would taste like? This flatbread is the answer. Okay, that makes no sense, but the point is that it was awesome. I’m not even going to bother describing the taste, but just know that it was “awesome.” It was pretty rich, so it’s not something I’d want to consume as part of a competitive eating challenge (ideally, it’s something I’d split), but it is incredibly good, and belongs on the permanent menu there as a unique option.

Unfortunately (to my knowledge), this flatbread has not been available since, but we have been back, and have really enjoyed the other flatbreads we’ve tried. 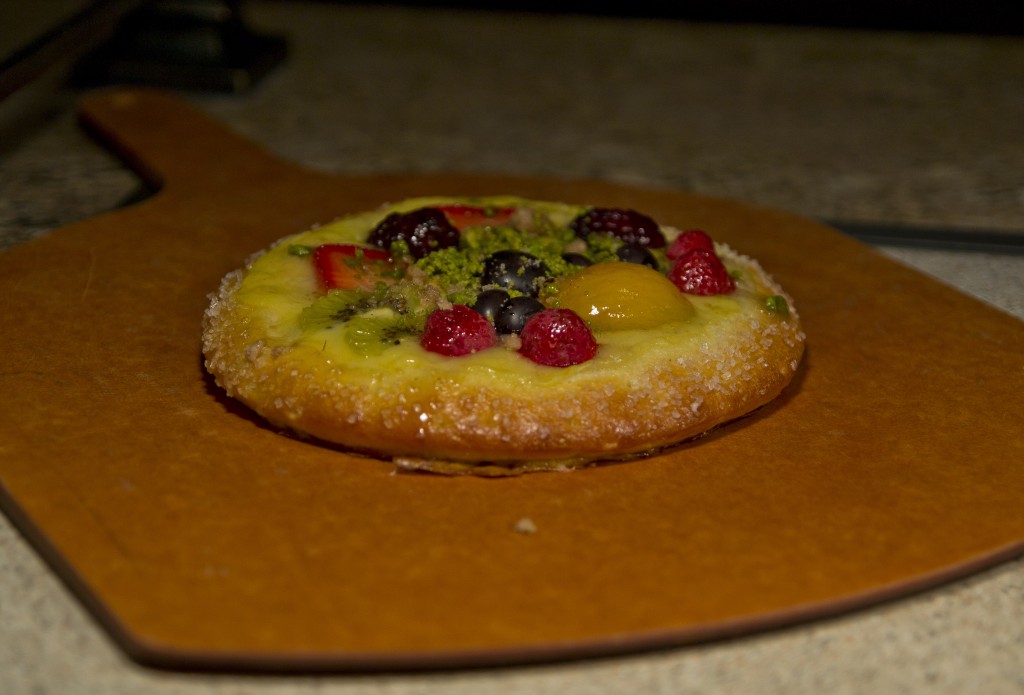 Overall, Boardwalk Pizza & Pasta is a nice restaurant that offers food superior to the standard theme park fare, although sometimes there is an issue with food sitting under heat lamps too long. This issue is exacerbated by the fact that this restaurant, tucked into a back corner of Paradise Pier, doesn’t see nearly the traffic that Pizza Port sees, making it imperative that guests request freshly made foods or visit during the busiest times. 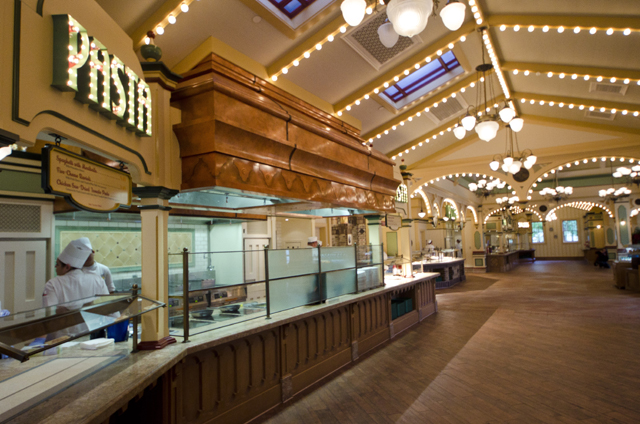 Beyond the food, the restaurant looks elegant with its theming, but even though the detail-work is great, the restaurant still seems a little flat. To its credit, Boardwalk Pizza & Pasta looks beautiful at night, and in the summer, live music performs here on the weekends, making it a great place to relax and be entertained while eating and enjoying the scenery of Paradise Pier. As it stands, Boardwalk Pizza & Pasta is a slightly above-average restaurant as compared to all of the counter service options in Disneyland Resort. It’s really good, but we’d still recommend Paradise Garden Grill next door unless you have picky eaters.

What do you think of Boardwalk Pizza & Pasta? Planning on eating here? Share your thoughts in the comments!