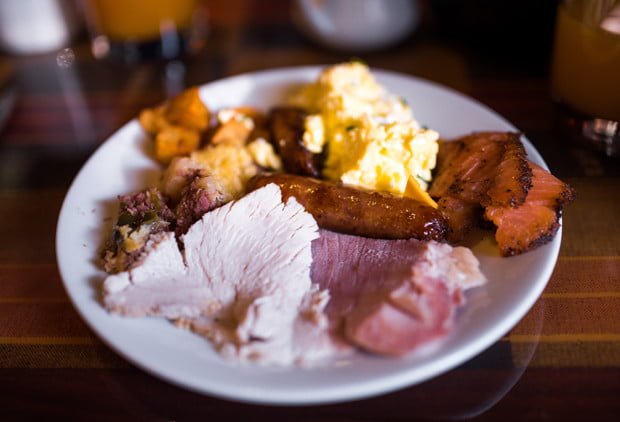 The breakfast buffet at Boma — Flavors of Africa in Disney’s Animal Kingdom Lodge is one of the best ways to start your day at Walt Disney World. This review features photos and thoughts about why breakfast at Boma is so delicious. Boma’s breakfast menu features a variety of American and African cuisine, with a diverse mix of adventurous and breakfast mainstays…so you don’t have to get your morning ‘jolt’ by trying exotic cuisine.

While we’ve done dinner at Boma several times and have long been fans of the meal, we did not do breakfast at Boma until fairly recently. Getting to Animal Kingdom Lodge early in the morning is a hassle, and other times when we’ve stayed at the Lodge, it’s been 1 or 2-night trips, and we’ve been in a rush to get to the parks.

Finally, we slowed down and took the time to do breakfast at Boma. I’ll admit, early on, I was not overly impressed with the meal. 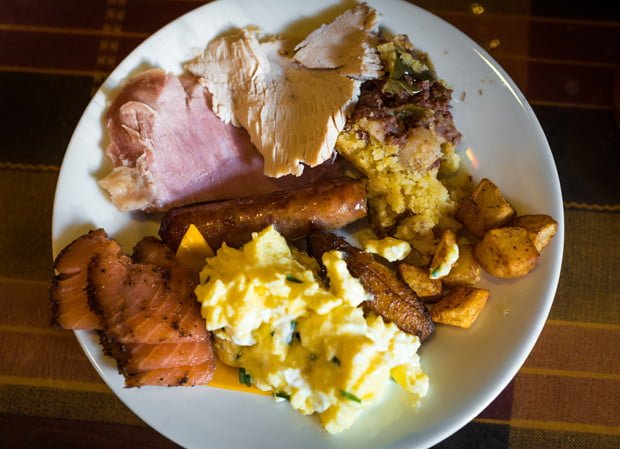 I had heard a lot of really, really great things about Boma’s breakfast, and my first plate was fairly indistinguishable from what I might’ve had at Trail’s End. After my first plate of food, I said to Sarah, “well, that was overrated.”

Aside from a few unique items, I thought it was pretty similar to any breakfast buffet at Walt Disney World. To her credit, Sarah demurred. 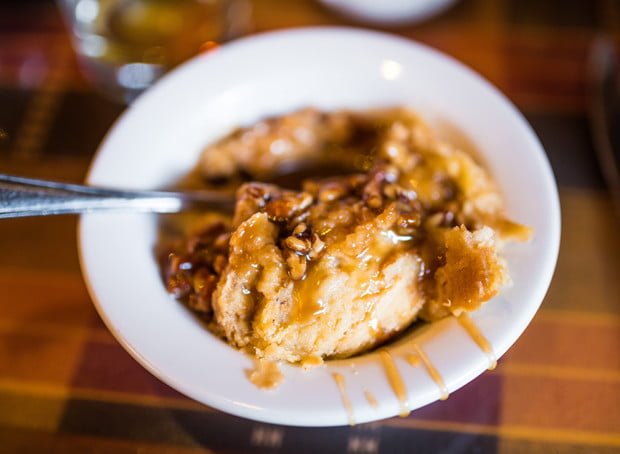 For plate two, I tried a couple of her recommendations, most notably the French Toast Bread Pudding with Praline Sauce. Game changer. This made me buy into the hype, at least partially.

I may or may not have followed that plate up with a heaping bowl of just the bread pudding. Just thinking about that bread pudding now as I write this is making me salivate. It is almost as good as the Bread and Butter Pudding at Raglan Road, and if you’ve ever had that, you know that’s about the highest praise bread pudding (or any dessert) can receive.

After trying this, the question of whether Boma’s breakfast is worth it sorta becomes, “how much is bottomless bread pudding worth to you?” I’m not even kidding. 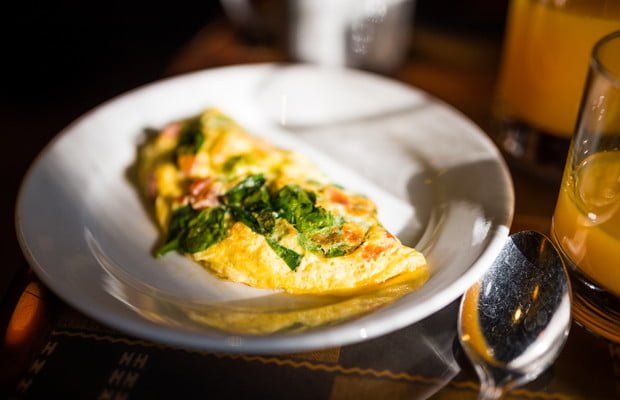 I then tried the made-to-order omelet, which was another good choice. That was followed by tastes of Sarah’s Scrambled Eggs with Goat Cheese and Spinach, and some Corned Beef Hash. (By this point, I was stuffed from bread pudding.) Other unique items that can, apparently, appear on the buffet include Turkey Bobotie and South African Tomato Stew, but I saw neither of these during our visit.

All of the options we did try on our second round were pretty good. You can consult the official menu to see what’s currently on the breakfast buffet at Boma, but unless they’ve scaled back, I’m pretty sure that’s only a partial menu. 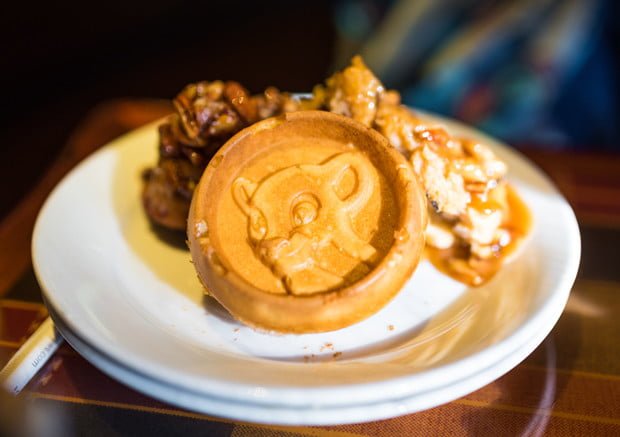 Ultimately, I was still a bit disappointed by the buffet. It wasn’t nearly as unique, ambitious, or exotic as dinner, but maybe I shouldn’t have expected that? It seemed like only around 4-5 items were things that would be out of place on the Trail’s End buffet.

Perhaps it was a matter of expectations or personal preference, though. Even though I’d consider Boma among the best breakfasts at Walt Disney World (not exactly fierce competition) and my mouth is currently watering as I think back on that bread pudding, I wouldn’t go out of my way to revisit this meal. 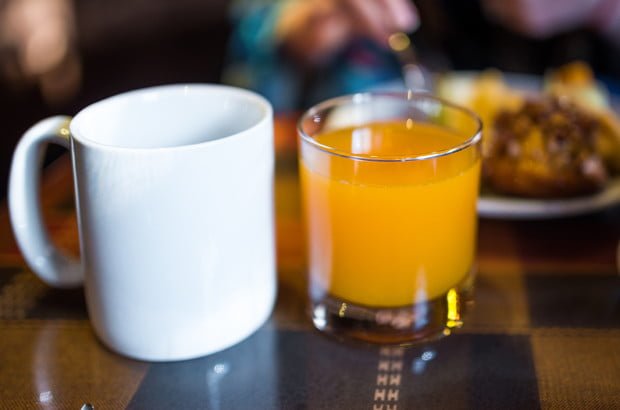 So ultimately, we enjoyed Boma for breakfast. Not as much as I was hoping we would, but it was still good. The bread pudding was really the saving grace of the meal for me, and I walked out stuffed thanks to that. If you’re a Walt Disney World regular, you should make a point of giving it a try (although it seems like everyone already raves about breakfast at Boma, so we’re late to the party on that.)

However, if you’re a first-time visitor, particularly one not staying at Animal Kingdom Lodge, it’s a bit trickier. First of all, there’s the question of whether you want to get up this early for a breakfast, especially one that isn’t within walking distance of a theme park. 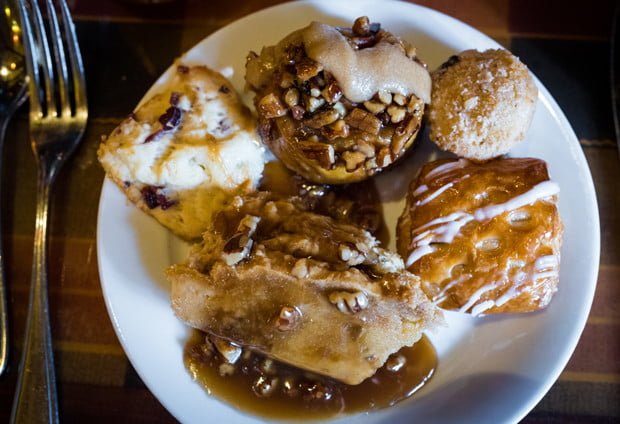 Then, there’s the question of whether you should do breakfast or dinner at Boma. On the one hand, dinner at Boma is exceptional. On the other hand, Boma’s dinner is somewhat similar to Tusker House, so you could always do that instead. On the other other hand (Stitch is pulling ‘hand’ duty for us, in case you were wondering), Zebra Domes. That two word argument is probably the most persuasive one, and we’d skew towards those who have never experienced Boma doing dinner over breakfast.

Overall, though, dinner is the meal I’d pick, but I suppose you cannot go wrong either way. A meal at Boma, and a visit to Animal Kingdom Lodge in general, is a wonderful experience. Even though it’s a bit pricey as far as breakfasts go, Boma’s breakfast buffet is significantly than many other options at Walt Disney World (I’m looking at you, Chef Mickey’s), and is far better. It’s easily one of the top 5 breakfasts at Walt Disney World, and even by WDW’s weak breakfast standards, that’s still a strong distinction.

Have you done breakfast at Boma? What did you think of the experience? Do you agree or disagree with our review? Any standout buffet choices that you’d recommend people give a try when dining at Boma? Any questions about this breakfast buffet? Hearing from readers is half the fun, so please share your perspective on whether this meal is ‘worth it’ or any other thoughts you have in the comments below!