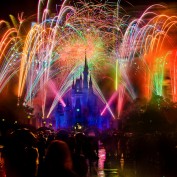 We wanted to try something new with this post, a photo essay covering a rainy night in the Magic Kingdom at Walt Disney World. My favorite political commentator and philosopher is Bill Watterson, author of Calvin & Hobbes. A lot of the Calvin & Hobbes Sunday pieces ran with only drawn frames and not a
Read More
I know a lot of people are going to be visiting Disneyland for the first time during the D23 Expo, so here’s a photo of three of my favorite rides at Disneyland. Two of the attractions are quite underrated. The third is an undeniable E-Ticket most people can easily name that will be closed for
Read More
Upon first viewing, this looks just like any normal shot taken of Cinderella Castle from the Liberty Square Bridge (Kodak Photo Spot). It’s a pretty plain Castle shot, right? If you look closer, or compare it to a normal shot taken from this location, you’ll notice that Cinderella Castle appears far smaller, and the moat
Read More
If you’ve viewed many of my photos, you’re no doubt aware that I love capturing the tranquility of the parks at night. While Tomorrowland is my favorite place to photograph at night due to its ambiance, Frontierland takes the tranquility crown. At night, it really captures the true spirit of the American West. In fact,
Read More
Aren’t the Disney Details one of the biggest things that compel all of us to return to the Disney theme parks so frequently? We all have our favorite attractions, to be sure, but the Disney Details, like this small bronze statue of Pluto found in the Magic Kingdom’s hub, make the parks rife for exploration.
Read More
Wishes! A Magical Gathering of Disney Dreams is an excellent fireworks show that is a must-see if you’re in the Magic Kingdom at night. Although we far prefer Disneyland’s fireworks show, Remember… Dreams Come True, Wishes! is still great. To purchase a print or digital download of this photo, or many other photos featured here
Read More
Frontierland at both Walt Disney World and Disneyland really captures the spirit of the uncharted American frontier quite well–despite being in the middle of two the most bustling theme parks in the world. At Walt Disney World, even the character meet and greets are themed, with Donald Duck doing his best Davy Crockett impression. To
Read More
As children, the Dumbo the Flying Elephant attraction at Disneyland and the Magic Kingdom in Walt Disney World is one of those attractions we must do. We soar high, flying with Dumbo as he flaps his ears in the breeze. As we grow older, the illusion and the magic wears off. With a little photographic
Read More
From the moment the lights go down, the excitement from the crowd for the Main Street Electrical parade grows. It reaches a fever pitch when you begin to hear the strangely addictive sounds of the Baroque Hoedown become audible and Mickey Mouse on the parade’s title float becomes visible. To purchase a print or digital
Read More
Nothing quite compares to Tomorrowland at night in the Magic Kingdom. The place comes alive with a kinetic energy not felt during the day. The Background Music seems to deeper and more palpable, the neon glows vibrantly, and the Tomorrowland Transit Authority Peoplemover quietly glides by overhead. No other land in the Magic Kingdom has
Read More
I imagine, the time period of this statue being right around the time of Walt’s death. In this interpretation of the statue, I imagine Walt saying, “Mickey, go forth and lead our Kingdom.” Mickey undoubtedly personifies the spirit of Walt Disney, and through him, the Disney Kingdom has prospered and grown far beyond Walt’s wildest
Read More