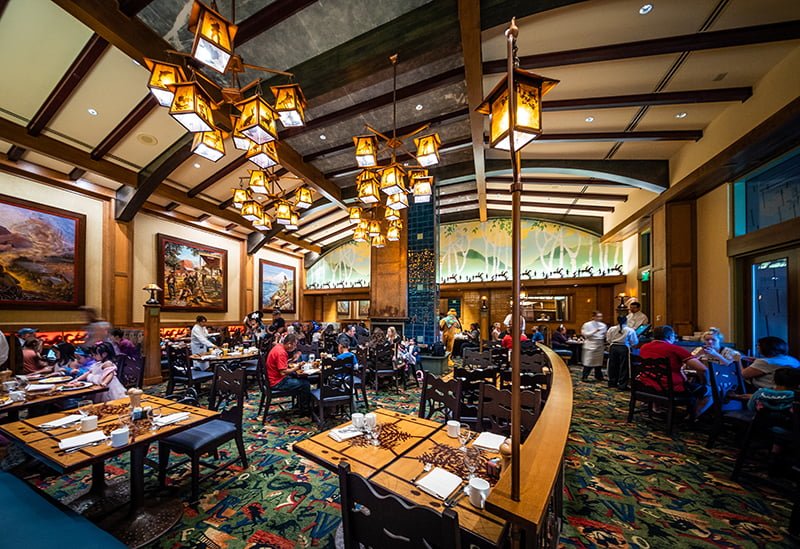 Mickey’s Tales of Adventure Breakfast Buffet is a character meal at Storytellers Cafe, a restaurant in Disney’s Grand Californian Hotel at Disneyland Resort. In this dining review, we’ll share food photos, and thoughts on the cuisine & character interactions.

We’ll start at the beginning of our experience at Mickey’s Tales of Adventure Breakfast. The waiting area for this Storytellers Cafe is almost always chaotic and crowded. We tend to avoid anecdotal observations like this in dining reviews, but Storytellers is in a pathway at the Grand Californian that we use frequently, and there are always a lot of people waiting, causing congestion in this path.

This isn’t exactly the most pleasant way to start out the morning, and it’s probably the result of Disney attempting to pack Storytellers Cafe, keeping its occupancy numbers as high as possible. This is further borne out in the spacing of tables inside the restaurant, which is cramped to the point that taking character photos without intruding upon the personal space around you can be difficult. In this regard, Mickey’s Tales of Adventure Breakfast feels a bit like Chef Mickey’s at Walt Disney World, which is not exactly beginning with a favorable comparison…

The good news is that this is where the similarities to Chef Mickey’s both begin and end. Aside from the congestion, Mickey’s Tales of Adventure Breakfast is an exceptional character meal–arguably the best one at Disneyland Resort.

This isn’t a huge surprise given the location in the flagship Grand Californian Resort & Spa, and also its status as the newest (for now) character dining experience in Anaheim. As the new Disney Princess Breakfast Adventures at Napa Rose demonstrates, Disneyland is looking to step up its game on this front, presumably eyeing an influx of tourists willing to splurge on such experiences. 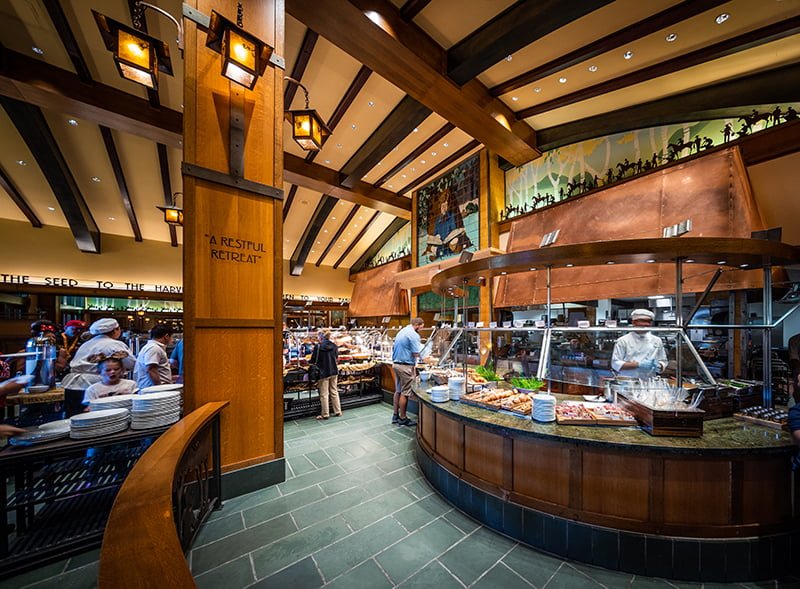 It had been a while since our last meal at Storytellers Cafe, and I was eager to head back.

I’ve always felt the environment here is really under-appreciated, with nods to literary legends and California stories. This was our first time here after spending more time in Pasadena touring Craftsman homes, so it was also fun to spot details I’d missed previously. (The Grand Californian is a treasure trove of little touches.) 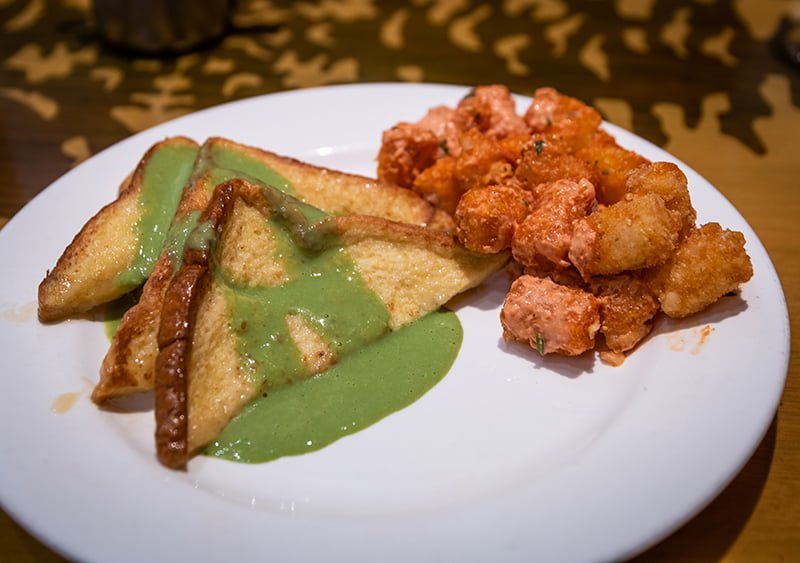 Food-wise, I’ll lead off with the photo that’s (by far) going to be the most appetizing one here, and that’s not really saying much.

Pictured are the spicy tater tots and french toast with matcha green tea sauce. That sauce should be applied liberally to everything you put on your plate, as it is fantastic. It could even make salad taste good (probably), but no guarantees on that. 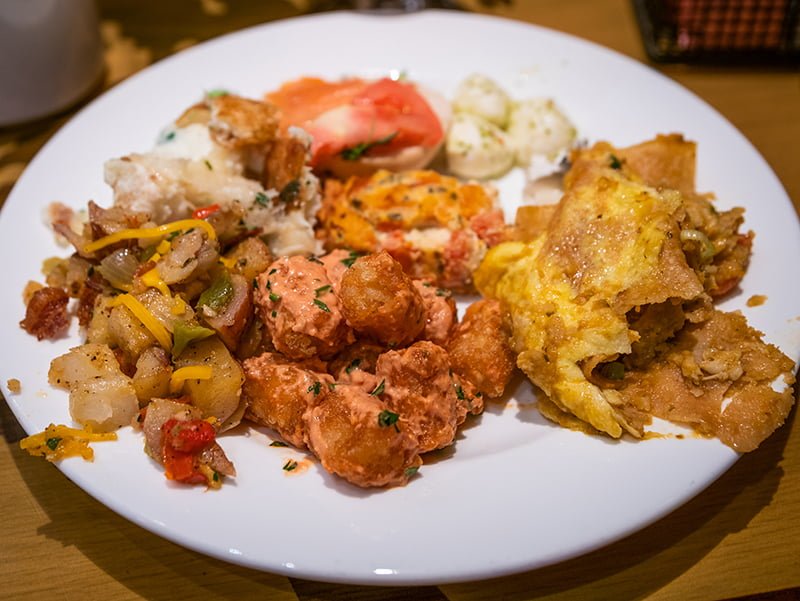 I need to get much better at buffet photography, as I realize this photo doesn’t exactly “sell” Mickey’s Tales of Adventure Breakfast.

Here you’ve also got the Chilaquiles with Fresh Eggs and Tomatillo Salsa and Loaded Breakfast Potatoes in the front, and Quiche of the Day and Bagels and Lox. All of these items are very, very good. (They’re simple, but the tater tots are addictively good slathered in that sauce.) 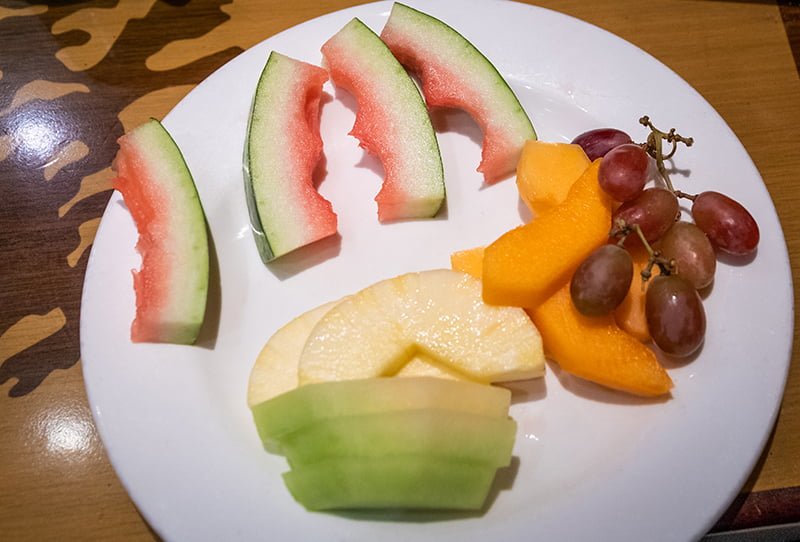 I either forgot to take a photo of this fruit before I started eating it, or wanted you to have incontrovertible visual evidence that I actually made the sacrifice and ate fruit (not by choice) from a buffet.

My apologies to those whose delicate sensibilities I’ve offended with graphic photos depicting the damage wrought by my incisors. 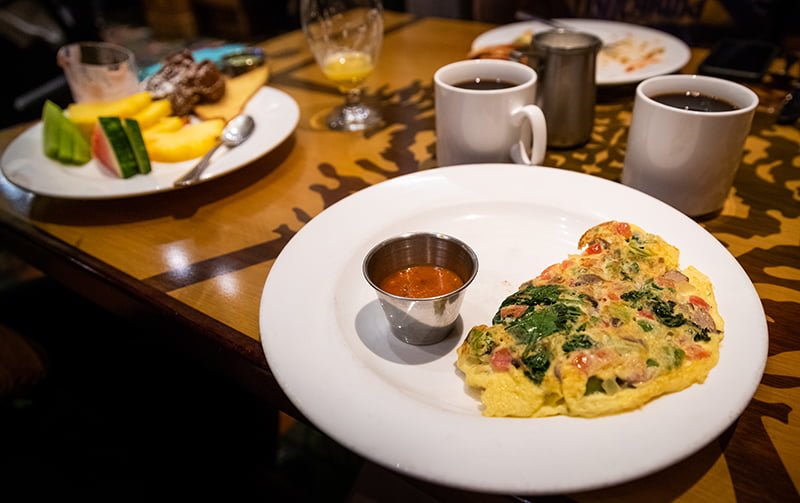 In actual good news, Mickey’s Tales of Adventure Breakfast has two omelet stations where you can order custom creations.

We each had one, and they were pretty good. It’s worth noting here that some of these options do rotate, so what is available one day (or what we had) may not be served from one day to the next. 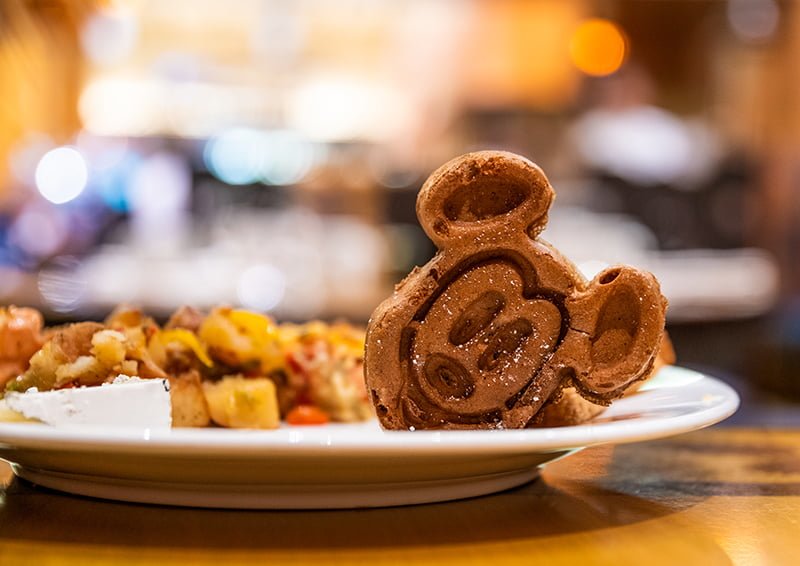 Fan favorite Mickey waffles are available, here in both regular and chocolate varieties. As with all things on the buffet, these are fantastic with the matcha sauce. (C’mon, how else do you think I finished all that watermelon?!)

We were very pleased to see enough variety on the buffet–and enough truly good items that we didn’t have to stick to the same couple of ‘safe’ choices as is normally the case. Now, that didn’t stop me from eating an absurd amount of tater tots, cheese, and chilaquiles, but it wasn’t for lack of other options. 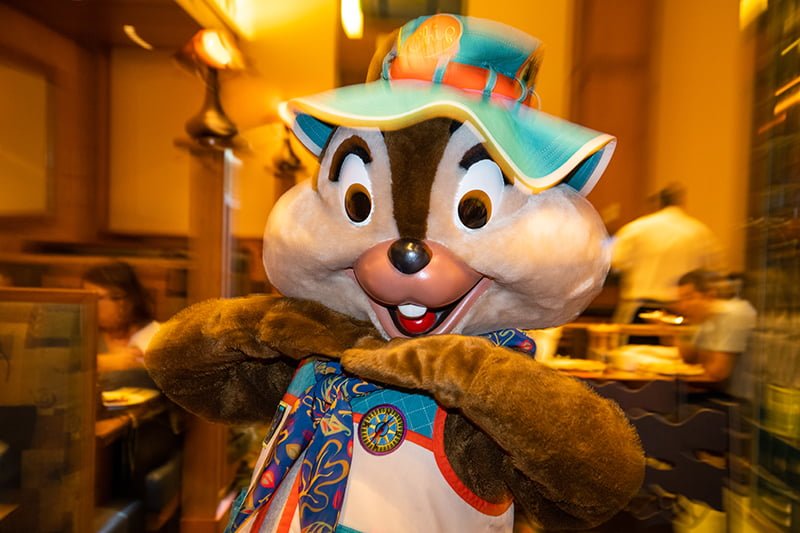 Transitioning from the food to the characters, we have this photo that is so weird I couldn’t not include it.

I believe this is what the art dealers call “imperfectly perfect.” 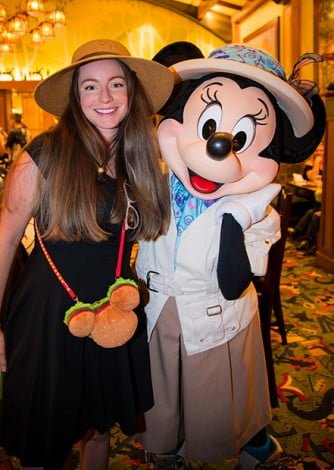 The costumes here are a high point, and to my knowledge, these aren’t featured anywhere else at Disneyland Resort or even Walt Disney World.

It’s hard to ascertain because I wasn’t going to be the dude asking Minnie to take photos of her shoes and bag, but there are a lot of little details on the costumes. 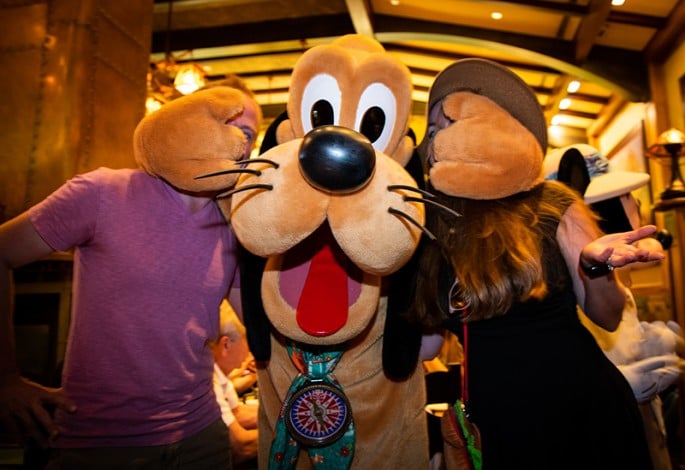 Our character interactions at Mickey’s Tales of Adventure Breakfast were fantastic, with every single character spending ample time with us on the first pass, and giving us some time for playful interactions.

Pluto covering our faces here worked out nicely because the lighting (and as such, shadows) was harsh here. Be sure to bring your flash or jockey characters a bit to face the “right” direction if you’re just using a phone for pics. 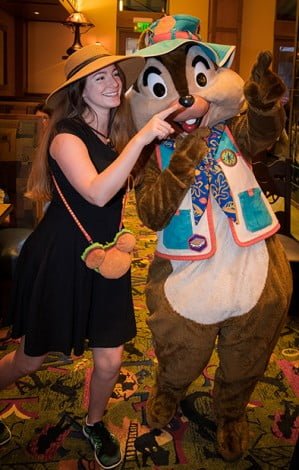 We have another photo that doesn’t make it appear as if Sarah is gleefully picking Chip’s nose, but we couldn’t deny you of this. 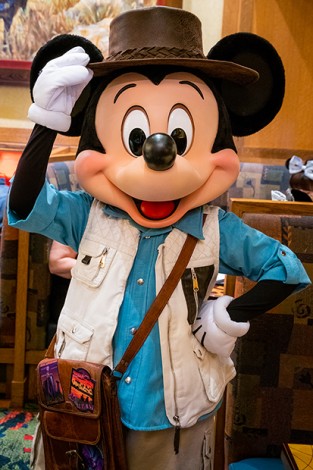 While we did end up having success with photos, the lighting conditions and space constraints did make it difficult. For every one that’s used here, I have about 10 that went into the junk pile, ruined by a stray head from another guest standing up or bad lighting.

We were fortunate to have the characters come around a couple of times, which was nice–and a bit of a surprise given the large crowd outside the restaurant waiting to be seated. 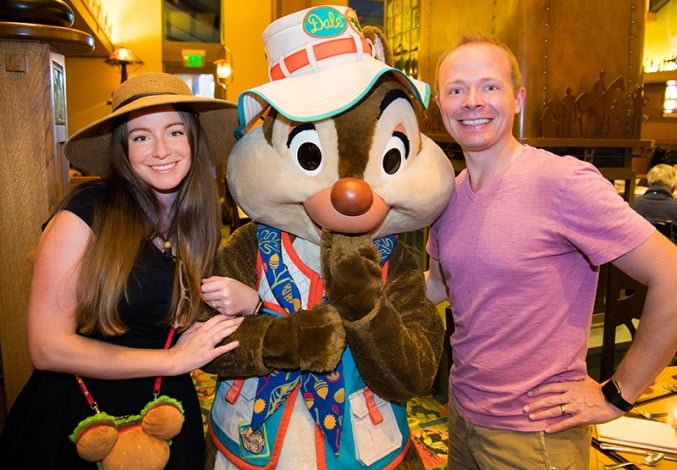 Overall, Mickey’s Tales of Adventure Breakfast is one of the best character breakfasts anywhere, period. If you read our Goofy’s Kitchen Review, you already know that’s my #1 among Disneyland Resort character meals. Well, this is Sarah’s #1. While I’ll concede that the food is objectively better at Storytellers, I prefer the overall experience at Goofy’s Kitchen, and also think the food is more memorable there. Good as it was, I don’t find myself craving anything in particular from this spread, whereas I regularly yearn for those zany bananas foster and creme brulee pizzas. No matter how you rank them, these are the top 2 character meals at Disneyland Resort (for now), and are both highly recommended even when considering the relatively minor downsides of each.

Have you done Mickey’s Tales of Adventure Breakfast at Storytellers Cafe? What did you think of the meal? Any standout foods from the buffet spread? What about the character interactions? Do you agree or disagree with our review of the restaurant? Any questions? Hearing your feedback–even when you disagree with us–is both interesting to us and helpful to other readers, so please share your thoughts below in the comments!