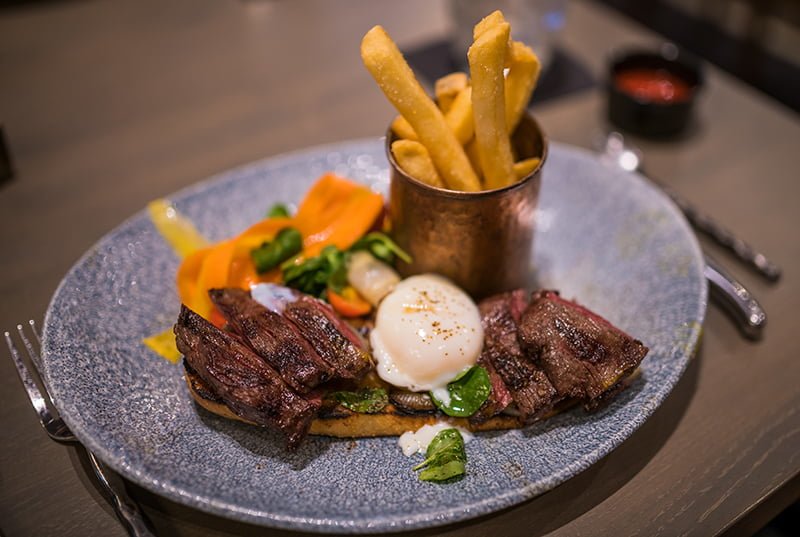 This list features our picks for the best restaurants at Walt Disney World to order cheap(er) table service meal, potentially paying counter service prices for cuisine of better quality. This list combines a mix of objective and subjective menu analysis to provides one way of getting more value for money during your Walt Disney World vacation.

In the last couple of years, we’ve noticed counter service price increases at Walt Disney World have outpaced price increases at table service restaurants. The result of this has been a narrowing of the gap between the cost of an expensive counter service meal and inexpensive table service meal. It’s been interesting to watch pricing trends as Walt Disney World tries to eke out additional profits of elements of the experience with price elasticity.

10. Garden Grove – Going strictly by the numbers, the Swan & Dolphin restaurant at which you should dine for cheaper prices is The Fountain. However, that means eating the food at The Fountain, which is pretty basic fare. Garden Grove is slightly more ambitious and slightly pricier. Still not the best option in the Crescent Lake/Epcot area, but still worthy of consideration. (This applies to lunch only.) 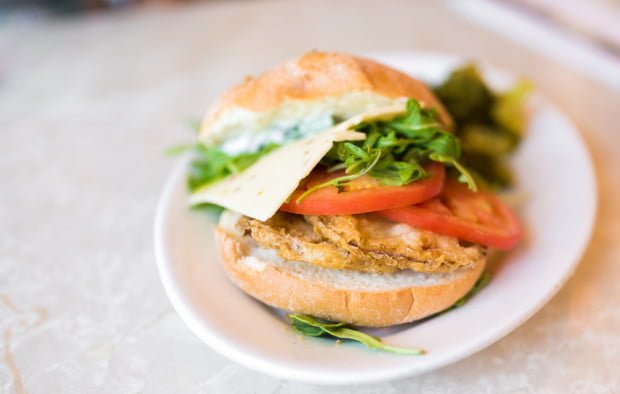 While Plaza Restaurant now has some pricey entrees, it also has a number of quality sandwiches at near-counter service prices. It’s really the only value table service option in Magic Kingdom, and makes the list on that basis. Click here to read our full restaurant review (with food photos). 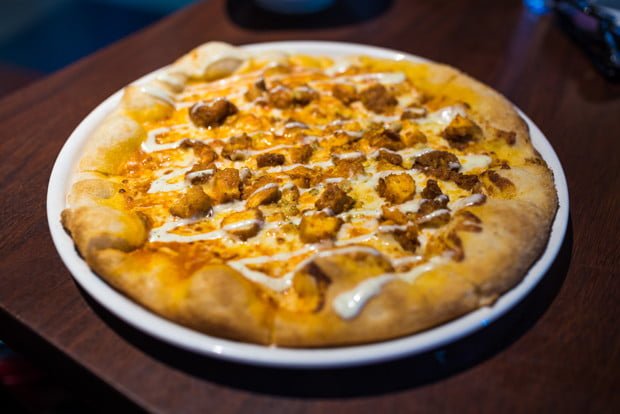 8. Splitsville Dining Room – I have a theory about Disney Springs restaurants: since they are outside the gates of the parks, there is less of a ‘captive audience’ element, and more guests who are locals. Those locals are more cost-sensitive and they have greater access to real-world restaurants that don’t have a location, Disney-name, or Dining Plan surcharge.

As such, the Disney Springs restaurants cannot charge as much of a premium. (They’re also largely third party restaurants that aren’t quite as quick to raise prices as Disney.) Splitsville is just one of several restaurants that could have made the list on this basis, and it is the best exemplification of my theory. Here you have pizza and other options, some of which work out to be cheaper than comparable counter service alternatives. 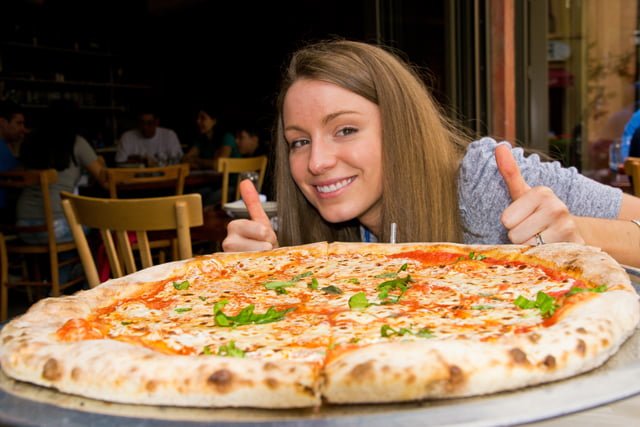 7. Via Napoli – I’m a bit reluctant to include this one. On the one hand, there’s the workable “hack” of splitting a Mezzo Metro pizza among 5 people for a ~$10/person (out the door) meal. On the other hand, I once split a Mezzo Metro pizza with fellow pizzatarian, Guy Selga, and we were both hungry afterwards.

While we are pigs, I don’t think this pizza is nearly as filling as it might look. Additionally, the rest of the menu seems overpriced to me, so you pretty much have to threaten your family, “big pizza…OR ELSE!” here if you’re going for value. Click here to read our full restaurant review (with food photos). 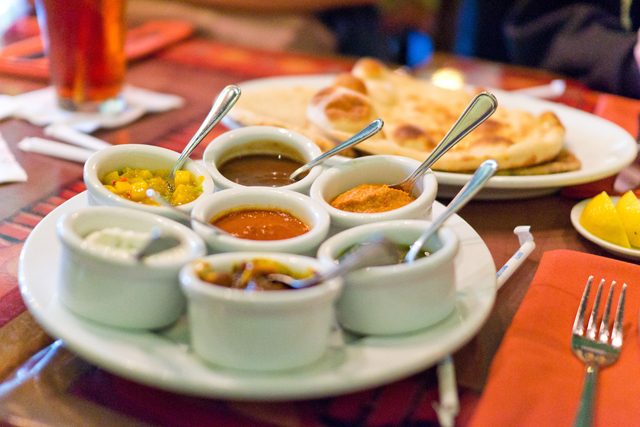 6. Sanaa – Despite slightly higher entree prices, Sanaa makes this list because it’s a restaurant where you can get excellent, ambitious cuisine and be out the door for under $20/person at lunch.

Our recommendation here is actually to (mostly) ignore the entrees. Do a mix of appetizers, and share them among your party for a ‘build your own tapas’ experience of sorts. Click here to read our full restaurant review (with food photos). 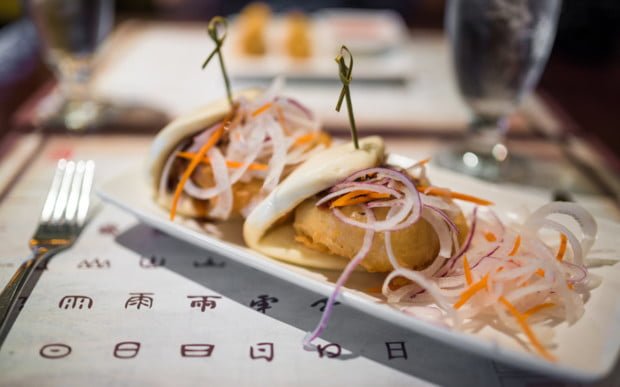 5. Nine Dragons – We sang the praises of Nine Dragons in our review, and while reader feedback was somewhat mixed in response, we think it’s hard to deny the value of the lunch entree options (and specials) here.

Plus, since we’re the ones making this list, we can ignore all you haters and rank this one highly, as we think the food here is really exceptional–especially given the prices. Click here to read our full restaurant review (with food photos). 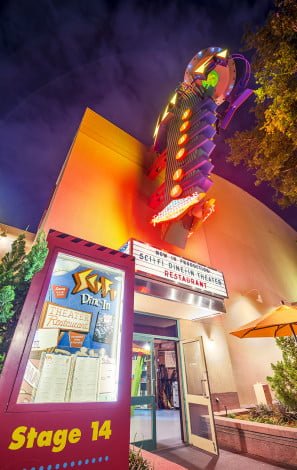 Given that many counter service meals at Disney’s Hollywood Studios are basically cardboard masquerading as food, this restaurant would be on our list simply as a good way to avoid the park’s counter service options. That plus the excellent ambiance at Sci-Fi catapults it to near the top of the list. Click here to read our full restaurant review (with food photos). 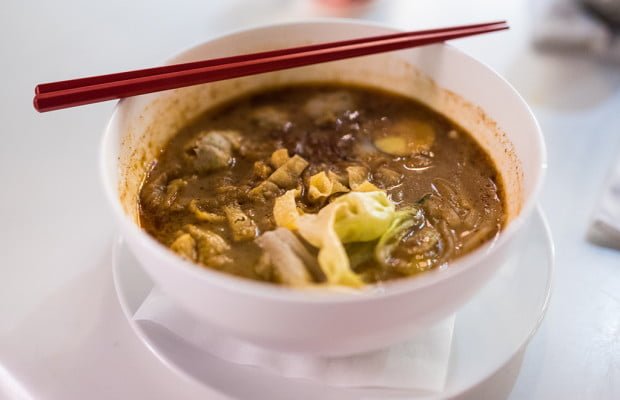 3. Morimoto Asia – When viewing the entire menu, this might be a “controversial” (to the extent that a list of Walt Disney World restaurants can give rise to controversy) pick. Although its menu has plenty of more expensive items, there are also a number of high-quality under $20 entrees that are great.

The emphasis in the value proposition at Morimoto Asia is more on the quality side than the price side. (Chef Art Smith’s Homecoming almost makes this list on the same basis.) Even with slightly higher prices than the norm on this list, Morimoto Asia makes up for that being offering even higher quality. Click here to read our full restaurant review (with food photos). 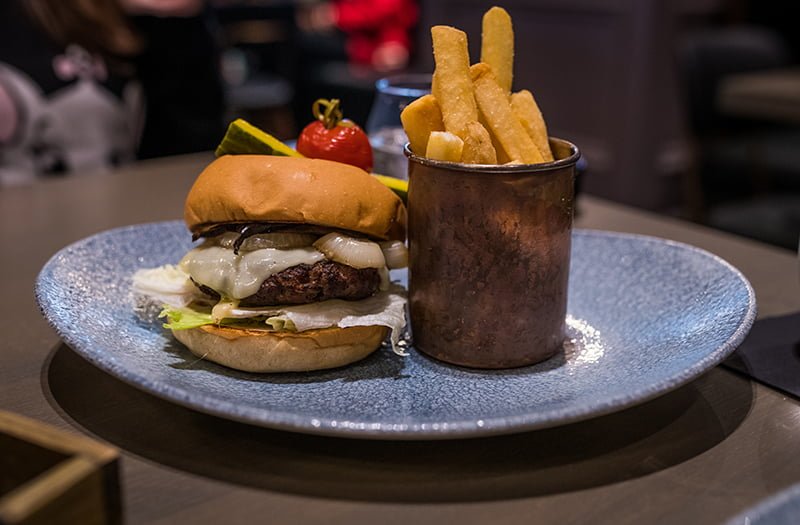 2. Crew’s Cup Lounge/Ale & Compass – If you felt this list was automatically “invalid” when you read that Beaches & Cream didn’t make the cut, this is why it didn’t. Everyone fawns over Beaches & Cream, and while it’s a great option for desserts, for entrees you are better off going to one of these nearby restaurants, which share a kitchen.

Unfortunately, as with Beaches & Cream, popularity and good value have given way to more expensive menu options in the last year at Crew’s Cup Lounge. However, the quality here is better than Beaches & Cream, and the prices are comparable. There are plenty of sandwiches on these two menus that qualify as great values, and they’re surprisingly good. As for Ale & Compass, although it’s one of the dullest restaurants at Walt Disney World, there are some menu standouts that aren’t too expensive, but are excellent-tasting. Click here to read our full restaurant review (with food photos). 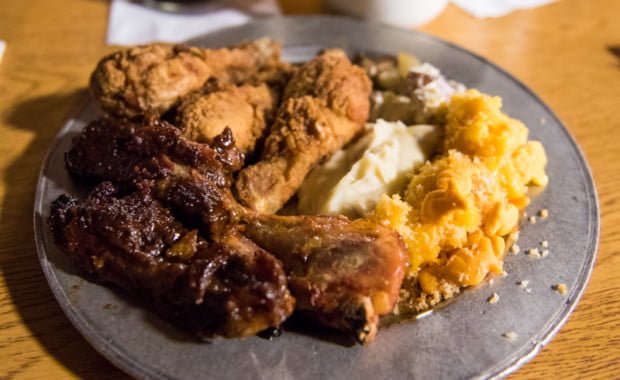 1. Trail’s End Restaurant – Without question, this wide selection of comfort foods is the best buffet value at Walt Disney World. For half the price of the dinner buffet at Chef Mickey’s, you can get a meal that tastes better and offers a more pleasant atmosphere. (You do miss out on character photos, but unless those are worth ~$25/person to your party, this is the far better option.) Click here to read our full restaurant review (with food photos).

A few parting thoughts. First, as mentioned, Disney Springs is generally a good place to go if you’re looking for better value. Just be sure to consult menus in advance, as some locations are across-the-board expensive. Second, if you look past the most popular restaurants, there are several table service lunch values throughout World Showcase. Third, table service restaurants at the Moderate and Villa resorts, generally speaking, have at least a few less-expensive items per menu. Finally, at restaurants with separate lunch and dinner menus (some now do an all-day menu), you’re almost always better off doing a late lunch as opposed to dinner; you pay a premium simply to eat at a later hour.

Do you agree or disagree with our list? Any questions we can help you answer? Hearing your feedback–even when you disagree with us–is both interesting to us and helpful to other readers, so please share your thoughts below in the comments!