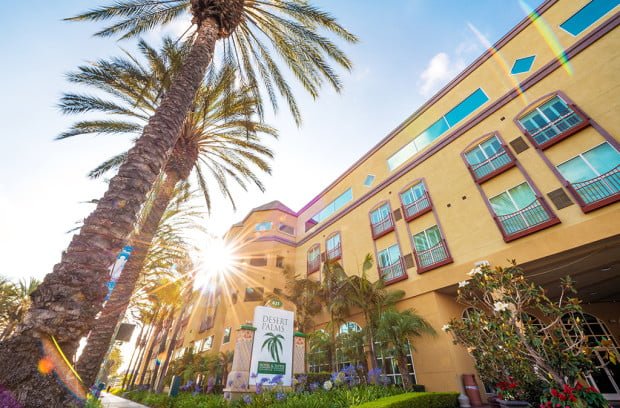 Desert Palms Hotel & Suites is a Disneyland Good Neighbor Hotel right behind Disney California Adventure and across from the Anaheim Convention Center. This review includes photos of the hotel, plus thoughts about our experience of staying here.

One of the most important considerations when choosing a hotel near Disneyland might be location, and even though Desert Palms Hotel is slightly farther than the hotels right across the street on Harbor Boulevard, it has a solid location at the corner of Katella and Harbor, right by 7-11 and the CVS Pharmacy, making Desert Palms a solid option if you don’t mind a 10 minute or so walk to the Esplanade between Disneyland and Disney California Adventure.

Desert Palms Hotel & Suites is a Disneyland Good Neighbor Hotels, and is classified by Disney as “Suites,” which is interesting given that Desert Palms has suites, but is mostly normal hotel rooms. It’s probably better classified as a “Moderate”, as is the case with most of the off-site hotels. You can get an idea of how Desert Palms stacks up to the competition in our Disneyland Hotels Reviews & Rankings post. Get an idea of our overall comparison of the benefits of staying off-site versus on-site in our Where to Stay at Disneyland post.

Desert Palms Hotel & Suites is one of those places that doesn’t leave a strong impression either way, but it’s still a perfectly fine hotel… 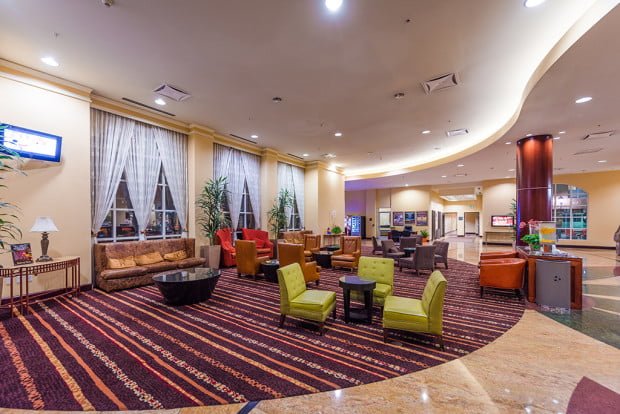 If I had to guess, I would say the lobby and other parts of the hotel had recently been refurbished, as there were flashes of a really modern hotel here. I’d also guess that it wasn’t a top-to-bottom refurb, and only had a budget of about half of what it should have. Some areas of the hotel felt nice and contemporary, other parts felt reminiscent of “classic” Anaheim motels.

However, it’s not a motel and is actually one of the closest hotels to Disneyland with indoor entrances to the rooms and other, more hotel-esque flourishes. That’s certainly a plus. 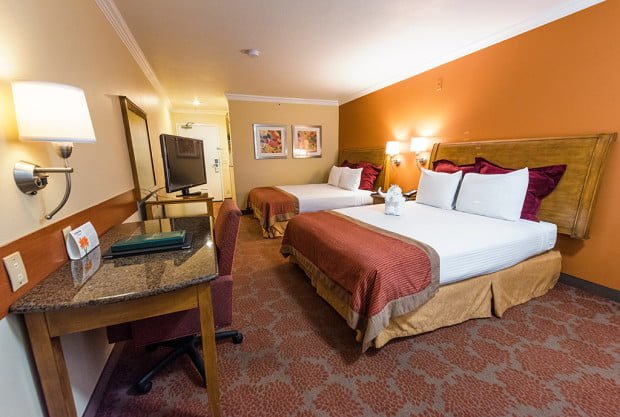 Like the common areas, the bedrooms feel like they are have been modernized, but only partially-so. The television and bedding are both clearly new, as are some fixtures like the lights and framed paintings. 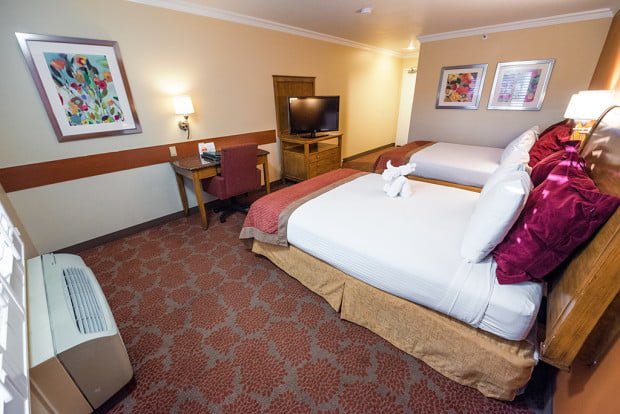 Then there’s the desk, headboards, and dresser, all of which look a bit worse for wear. The carpet also seemed worn and really in need of an update. The AC unit was quiet–at least to the extent of these units–and I couldn’t hear anyone above or through the walls of the room. 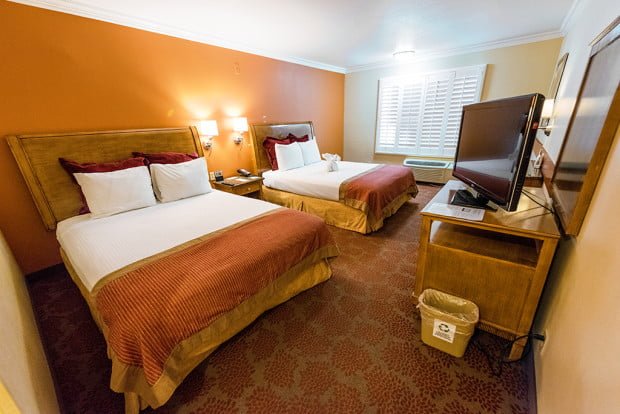 Although new, the bedding was nothing incredible. It was comfortable and allowed for a quality night’s sleep, but don’t expect to have the best night of sleep in your life…unless you go from rope drop to park close in Disneyland, in which case you could probably have an amazing night of sleep on a dirty piece of plywood. 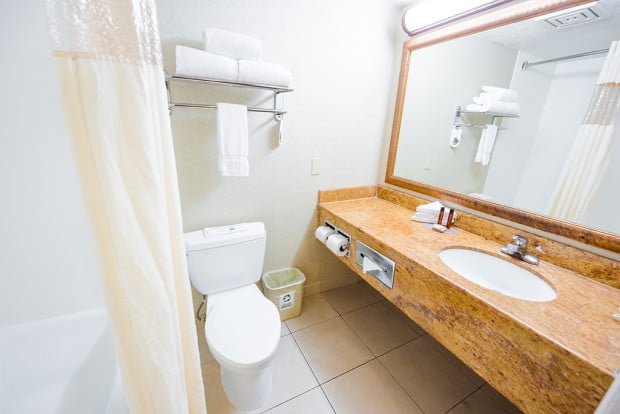 The bathroom is a single room, with shower, toilet, and sink all in the same cramped area. 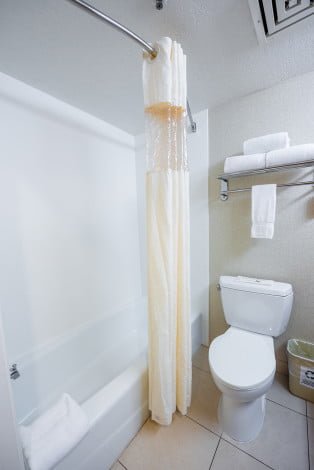 The water pressure was good and the bathroom was clean, but that’s really about all that needs to be said. Very much a typical, cheap hotel bathroom. 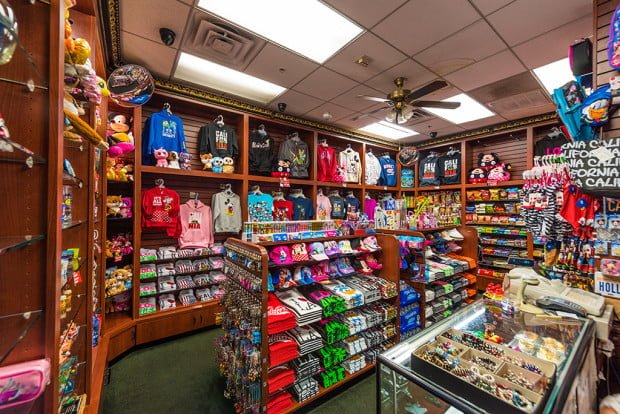 It seems like each of the hotels in Anaheim has gift shops selling absolute junk. Do people actually buy this? There are literally hundreds of shops all over Southern California selling nicer stuff for about the same prices. There’s something to be said for convince, but still… 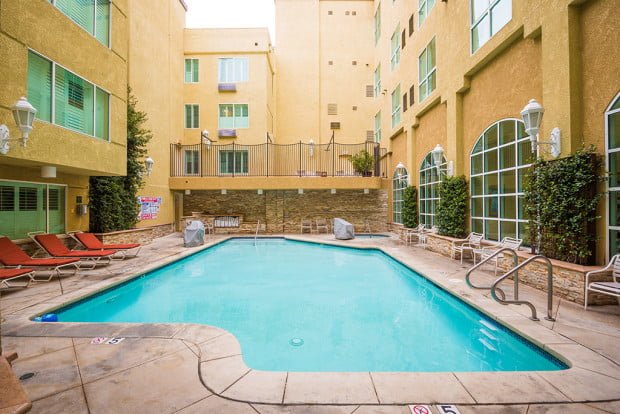 The pool is reasonably nice at Desert Palms Hotel; I like that it’s located in a courtyard within the hotel, rather than fenced in as part of the parking lot. It especially looked nice lit up at night. It’s still nothing mind-blowing, though. There’s also a fitness center that’s okay–better than most hotels near Disneyland (if they even have fitness centers), but nothing special. 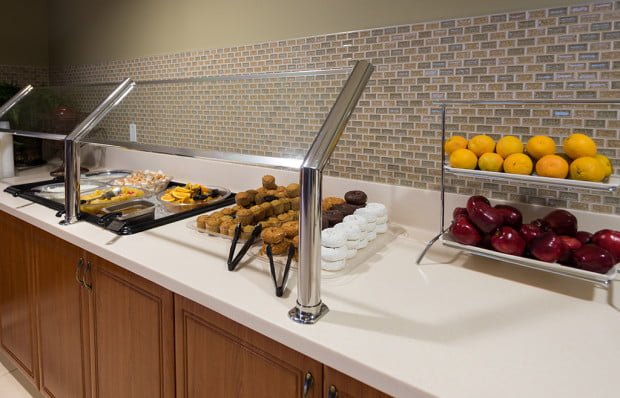 One of the other highlights of Desert Palms Hotel is the continental breakfast. Of the places I’ve stayed near Disneyland, this is one of the best (included) breakfasts, being served upstairs in a large room with an outdoor balcony looking out into Disney California Adventure. 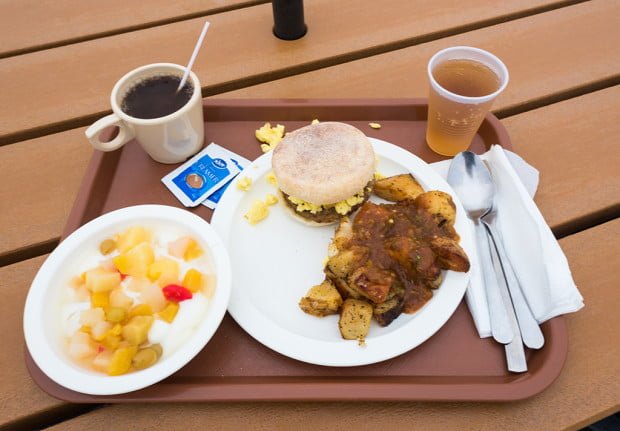 My favorite aspect of this breakfast was being able to use the eggs, sausage, and English muffins to make breakfast sandwiches. There are also stations to make your own waffles, among other things. Mind you, this isn’t going to be as good of a breakfast as you’ll get at a nice restaurant, but it’s probably easily as good as whatever “food” Captain Kidd’s charges $10/person for at their buffet. 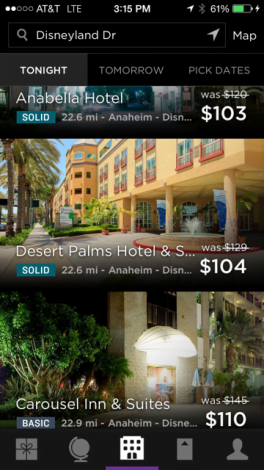 I paid $104/night for my stay at Desert Palms Hotel & Suites through the Hotel Tonight app. The day I booked it was the first time I had seen it on the app, and it’s been on there nearly everyday since, but I’m not yet sure how often to expect it on there. I’ve also noticed that its rates have fluctuated dramatically on there, and have been on the high side a few nights ($180/night!). If you are comfortable winging it a bit and don’t mind potentially staying at a different hotel on Harbor Boulevard, I highly recommend waiting and using Hotel Tonight to book.

You can book via Hotel Tonight up to a week in advance and there’s always availability in Anaheim within walking distance of Disneyland, even on the day-of. Use code TBRICKER1 to save $25 on your first booking via Hotel Tonight. 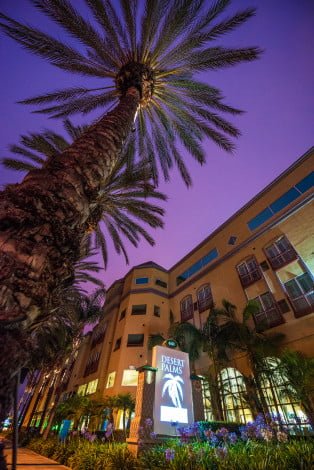 Have you stayed at Desert Palms Hotel & Suites in Anaheim? Did you enjoy your stay? Did you enjoy the breakfast? What did you think of the guest rooms? Considering this hotel? Do you prefer staying off-site or on-site at Disneyland? Please share your thoughts or questions in the comments section below!