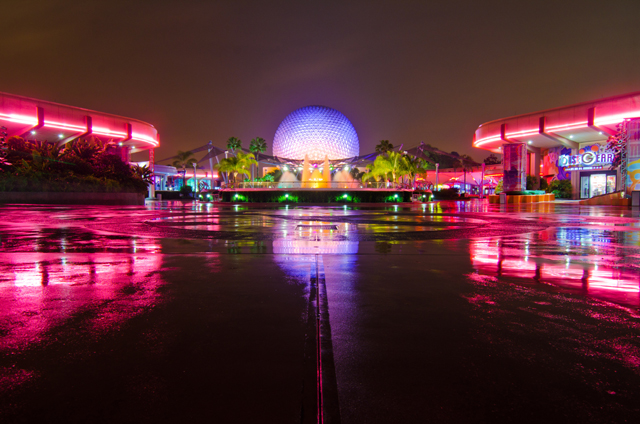 Note: if you follow our exploits through social media, you might be aware that we took two trips to Walt Disney World, one before Christmas and one for New Year’s Eve, about which we haven’t reported yet. It has been an incredibly busy winter for us, and with the content of these reports almost entirely relevant to Christmas and New Year’s Eve, it seems like a better idea to us to delay these two reports until next fall and focus on current trip reports now, rather than fall further behind with the current reports. The photos are edited for these previous trips and the trip reports have been started, so they will be coming. If you have any questions about these trips for your reference when planning your own trips, feel free to ask them on the DisneyTouristBlog Facebook Fan Page! Okay, on with the report…

This trip started exactly like all the rest. Our trips to the airport have become a routine, and since they’re not the “Disney” part of the trip, anyway, I won’t bore you with the details. For those unfamiliar with this routine, it includes eating at McDonald’s, reading vintage Disney books on our flight, and rushing off towards Disney’s Magical Express when we arrive at the airport. 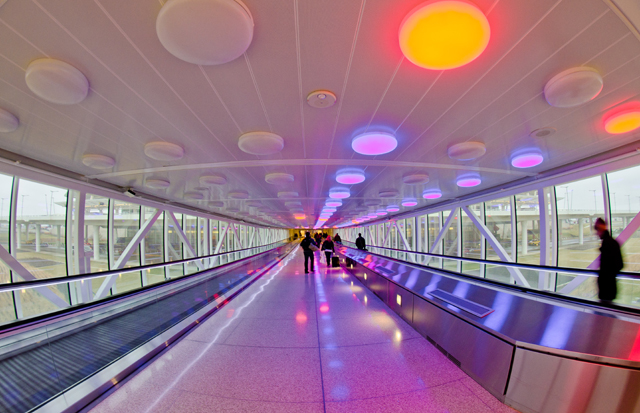 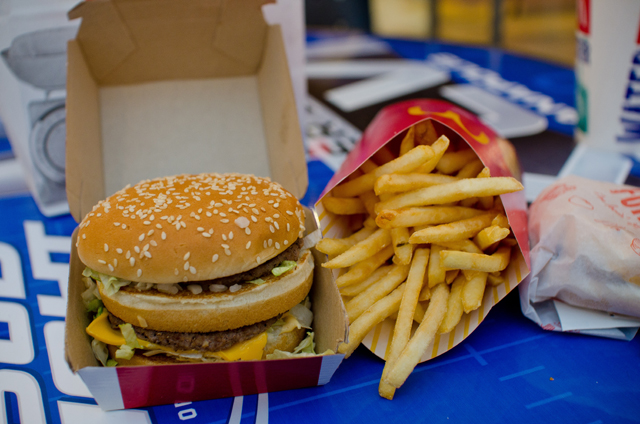 If any of this interests you, especially my strong love for the McDonald’s fast food restaurant, I encourage you to check out one of our previous trip reports, where I cover this routine in more detail. 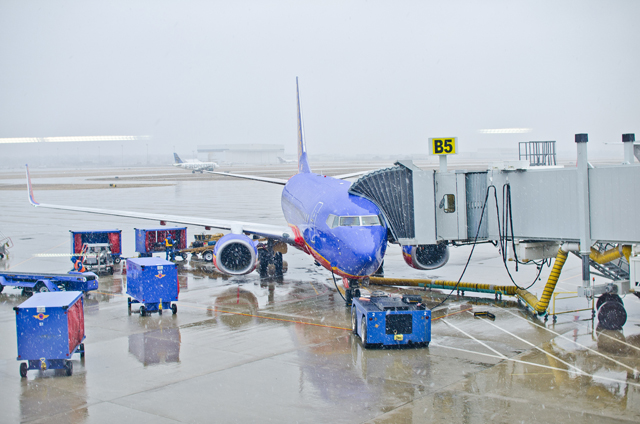 Due to the snow, our flight had been delayed by about an hour, which put us ever-closer to that looming midnight closing of Epcot. When we arrived at Disney’s Magical Express, it appeared we’d be immediately placed onto an almost-full bus that was about to depart, but instead the bus left without us, and we were the first ones on the next bus. This led to a 30-minute wait while the bus filled. Of course, we were also the second-to-last stop. 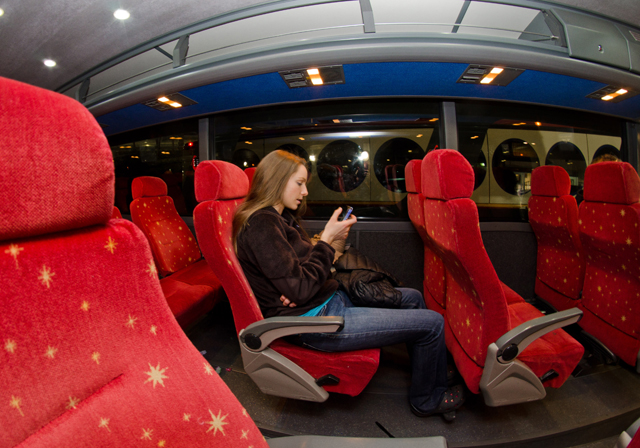 Oddly enough, the bus made a stop not only at Caribbean Beach Resort, but in the Aruba section of Caribbean Beach, where there was a tent set-up for some (my guess is cheerleading-related) event. The mother of a family who was to get off there became irrate when she saw that no one was in the tent, and for a little bit, I thought she wasn’t going to get off the bus. Our driver didn’t really know what to do about this, but they finally did get off. While I was secretly hoping she’d quickly get off the bus so that we could get to Epcot quicker, I can’t say I completely blame her. It was pouring outside and no one in the tent meant that she might have to walk back to the main check-in. At a spread out resort like Caribbean Beach, that’s pretty far!

We finally arrived at Disney’s BoardWalk Inn, where we surveyed our room (we had a partial BoardWalk view, but no balcony) before heading out to the International Gateway entrance of Epcot.

It was still raining pretty hard, and if it weren’t our first night, we might have just relaxed at the resort. But, we thought we’d at least try to brave the rain for a bit. While I love the Magic Kingdom, it seems like with each subsequent trip, Epcot continues to creep closer to “favorite” Walt Disney World park status. This is especially true at night, when the lights, music, and the Fountain of Nations really sparkle.

We weren’t really sure of what we wanted to do first, but when I saw the reflections in the wet pavement in front of the France pavilion, I knew what I wanted to do—take pictures! Sarah was fine with this, so we headed into a gift shop so I could put a camera poncho

on my camera and set-up my tripod. We then went back outside and I snapped a few photos. After that, we noticed it begin raining harder, at which point Sarah decided it was time to call it a night. With only an hour left before the park closed, this didn’t seem like such a bad idea, especially since we wanted to be up early the next morning.

This also gave me the chance to focus on taking photos. I normally feel guilty about setting up the tripod and shooting while we can still do attractions, but if I’m only holding up myself, I don’t find it so objectionable. So I wandered for a bit, with Spaceship Earth quickly beckoning me to Future World.

Even with the camera-poncho, getting good photos proved difficult, as raindrops kept landing on the glass of my lens, ruining many otherwise good shots. Given that there are only three Epcot photos in this installment, you might think that the rain ruined the majority of my shots. Actually, it didn’t; I just only post what I call “4-star” photos in the trip report. Five-star photos are reserved for the Photo of the Day series (some that I’ve already posted as photos of the day have found their way into the trip report), so keep an eye out for more photos from this particular evening there. The rain did ruin some shots, but it enhanced as many shots as it ruined!

Despite the rain, I kept going. Finally, I ended up in Future World, which was all but empty thanks to the rain. After taking a few photos on the side of Spaceship Earth, I decided to wait out the rain by enjoying the attraction. 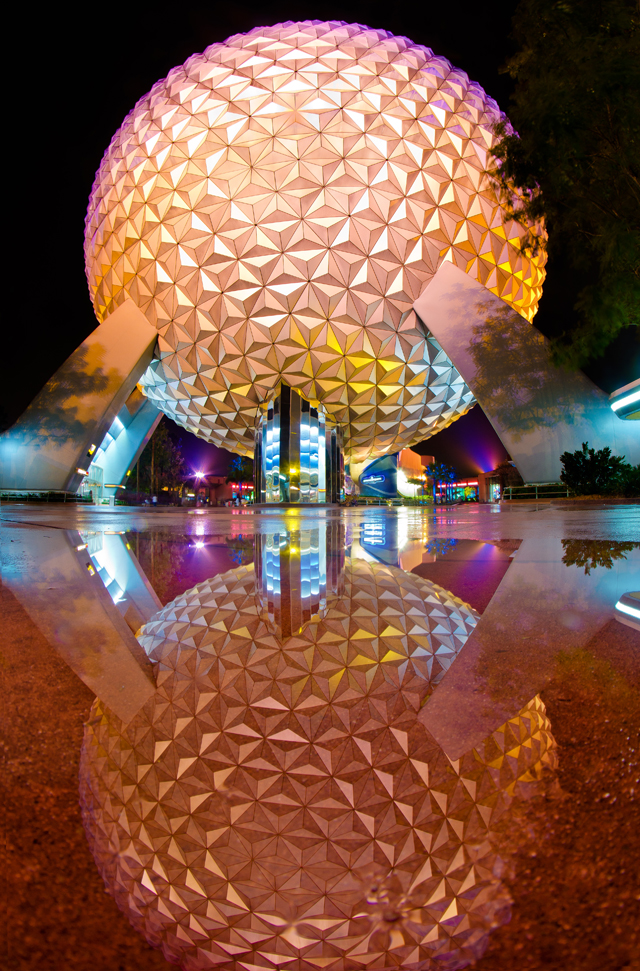 Then, I saw a glorious puddle of water in an uneven area of pavement. Knowing this puddle might dry up or be mopped up by Cast Members, I decided to delay the ride. I positioned my tripod as low to the ground as possible, trying my best to angle the camera so I captured as much of the reflection as I could. Finally, I determined that I needed to get even lower. I carefully set my camera on my camera strap so that the camera itself wouldn’t get wet and started snapping away. Since my camera was so low to the ground, I also had to get low to compose the shot. I can only imagine what other guests thought as they saw some fool lying on the ground with his camera in a puddle of water.

Right as I thought that I finally got the shot I wanted, I noticed another puddle that was a little bit better. I thought about repeating the whole process with that puddle, but in looking at the time and noticing a herd of guests approaching me, I figured it was better to move on, making my way over to Journey into Imagination for some more reflections photography, then back towards World Showcase. 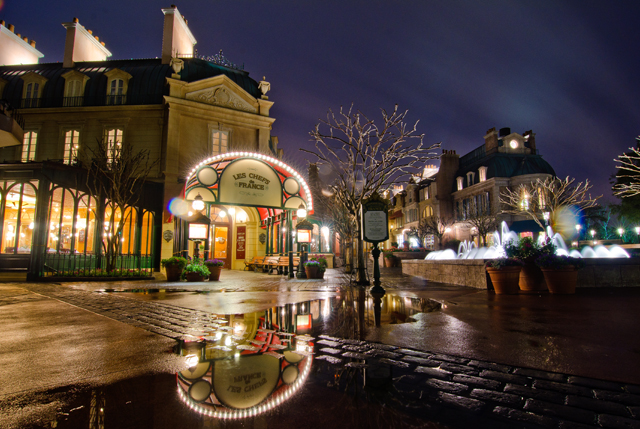 I wandered World Showcase for a bit, doing some shooting in Canada, the United Kingdom, and France. Somewhere along the way, it quit raining! I rejoiced when I noticed this (although I was already soaked, so it only made a difference from the camera’s perspective) and removed the bulky camera poncho.

It was getting late, so at this point I decided to call it a night. Or so I thought. As soon as I arrived on the BoardWalk, I noticed how beautiful the wood planks of the BoardWalk looked with the neon of the signs and light from the popcorn lamps reflecting off it. So I stopped and took more photos. 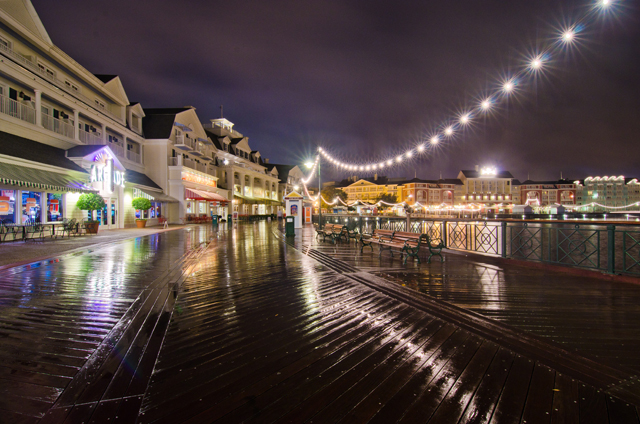 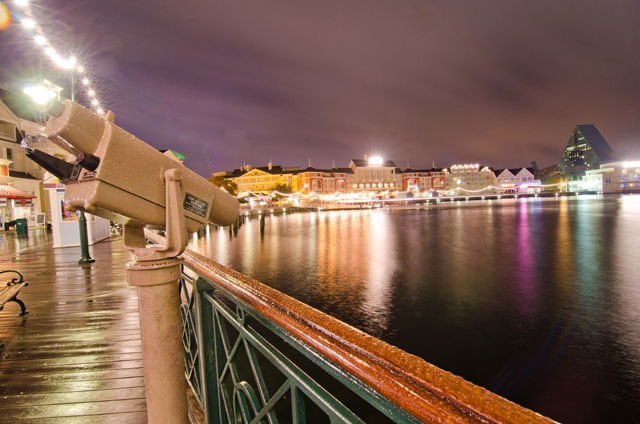 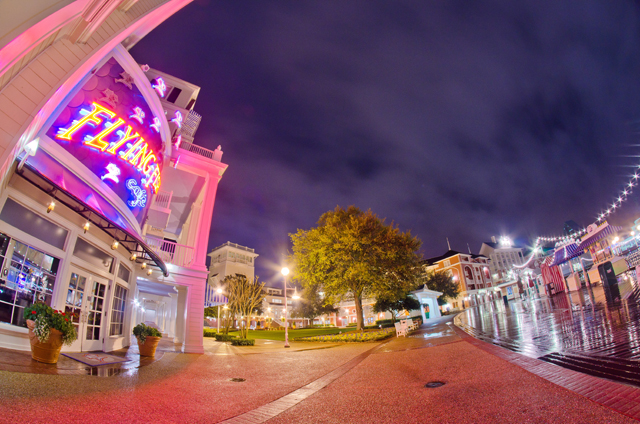 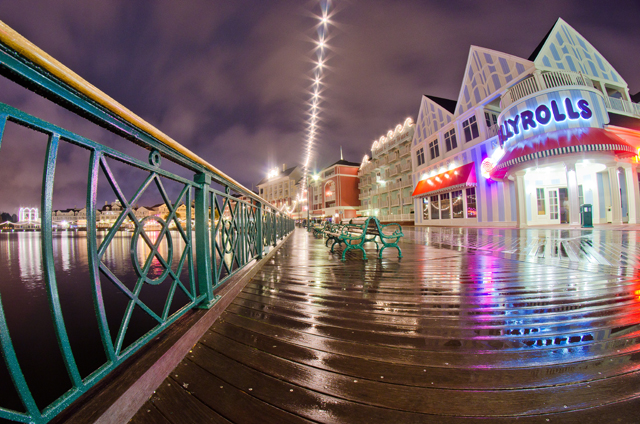 Given that it was a Friday night at nearly 1 am, it was not too surprising that I encountered a number of intoxicated folks as I wander around over by Jellyrolls and Atlantic Dance Hall. I don’t mind drunk people at all, but they’re highly unpredictable, and they often stand, sit, or lie in the exact same spot for long periods of time. This was the case with a couple that was more or less going at it in front of Jellyrolls. In this case, the phrase “get a room” would have been very apropos, but I didn’t want to disturb their “magic moment.” I know they saw my tripod set up, waiting for them to move, but perhaps they were into that sort of thing? I’m really not sure. In any case, drunk love birds, if you’re reading this, I have a lovely photo of you too that I’d be more than happy to send your way… 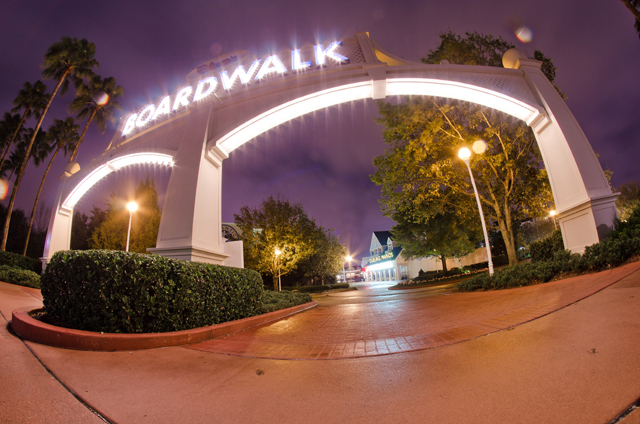 I tried to erase this mental image by enjoying the more family friendly beauty of the BoardWalk itself, which was looking stunning on this night, and kept improving as time wore on. The sky really opened up, with some incredibly dynamic clouds. I was quite pleased with this, although I really wished this bright sky and these clouds would have been present at Epcot when I was shooting Spaceship Earth. I’ve been hoping for these kind of clouds around Spaceship Earth for a while now!

After wandering over to the Swan & Dolphin briefly, I contemplated going over to the Yacht and Beach Club. I really wanted to do some shooting over there, but it was also 1 am, and it probably wouldn’t be too nice of me if I rolled into our room at 2 am and woke Sarah up. Especially since we were planning on making rope drop at the Studios the next morning. So I headed back. I could just see the photo I wanted of the Yacht and Beach Club lighthouse with dramatic clouds overhead, and it took all the restraint in my being to not run over there and shoot it. 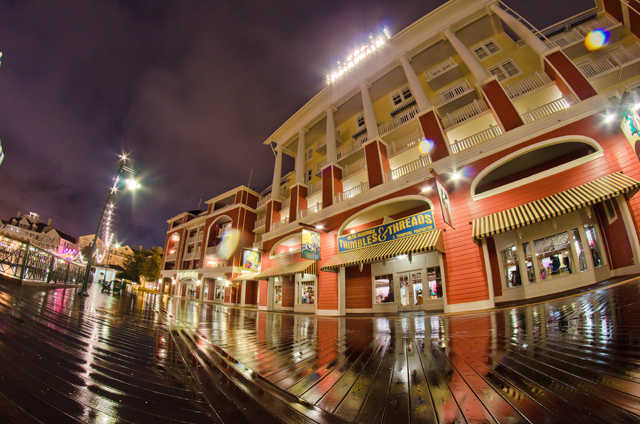 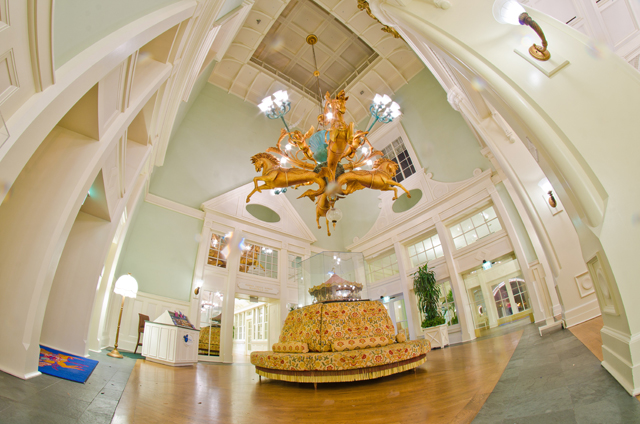 Instead, I headed back to the hotel and went to bed. 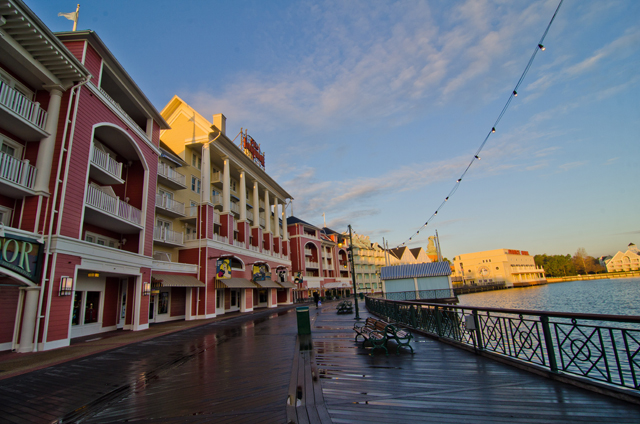 The next morning, I was up bright and early just before 7 am, ready to head downstairs to the BoardWalk and shoot the sunrise. The good thing about normally getting up at 5:30 am is that my body’s internal clock tries to wake me up close to then no matter what time I go to bed. 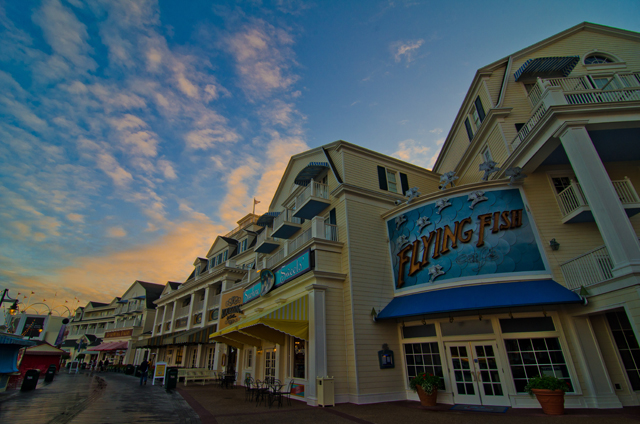 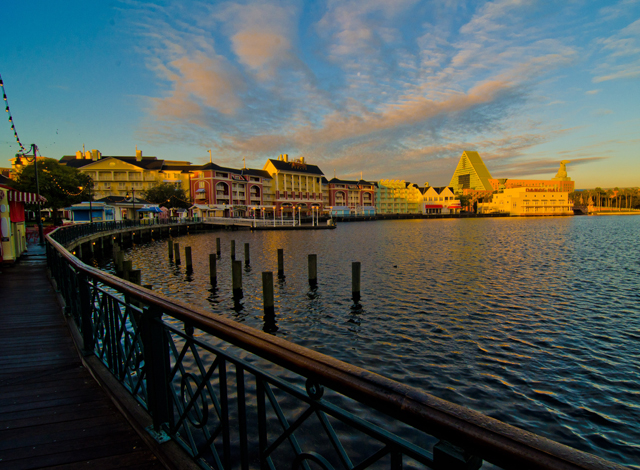 The sunrise was gorgeous, and this time, I couldn’t resist heading over to the Yacht and Beach Club. I knew that I had to be quick, as I was only supposed to grab a few photos of the BoardWalk and some breakfast cupcakes while Sarah got ready. 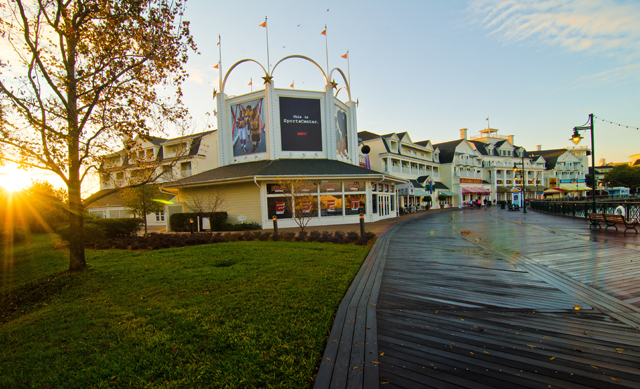 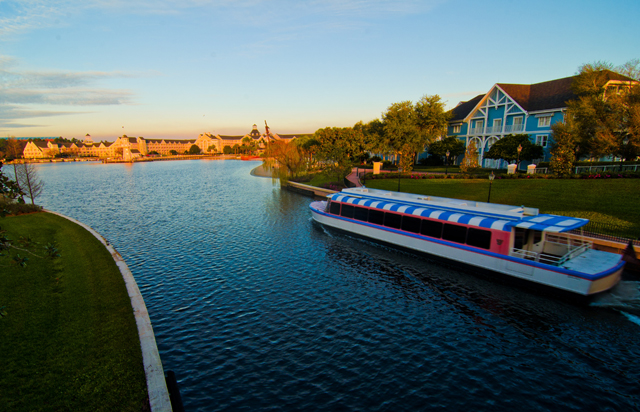 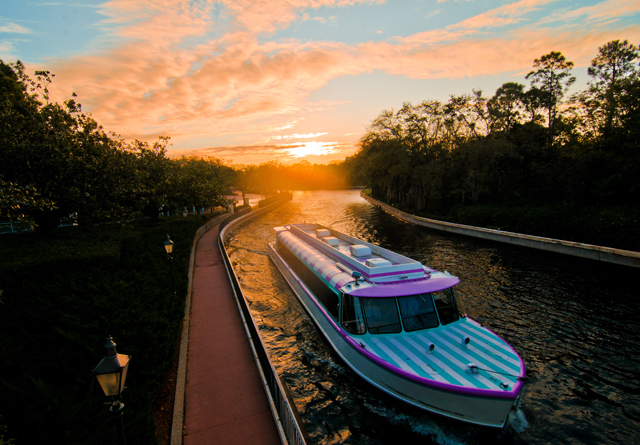 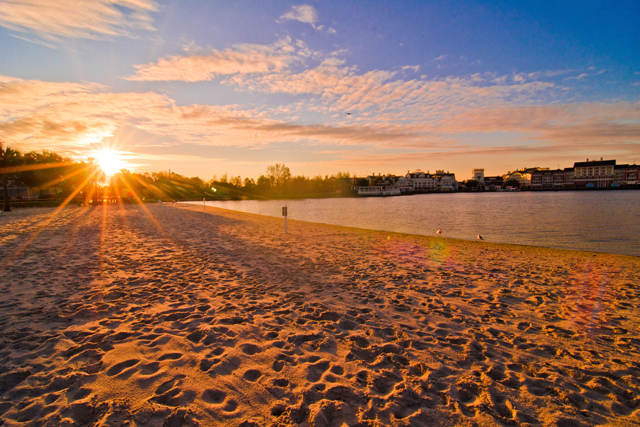 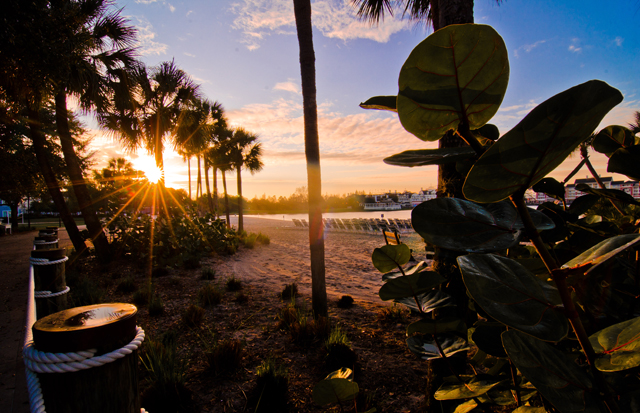 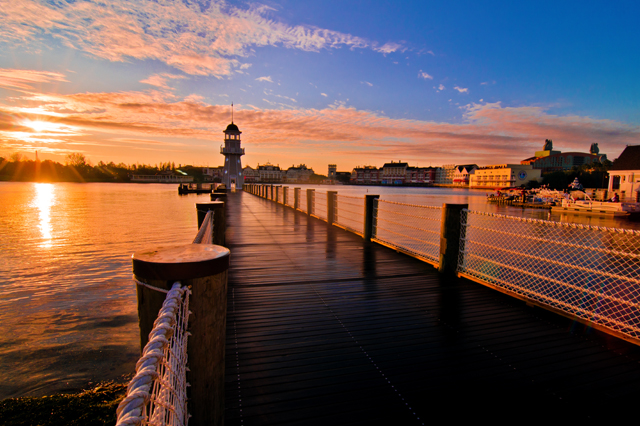 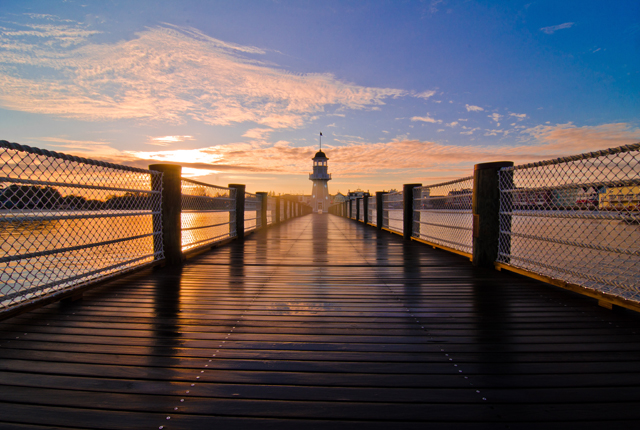 Of course, this isn’t exactly what happened. Instead, I wandered all over the place, shooting around the Yacht and Beach Club and getting some Coke over there at their quick service station, before heading back to the BoardWalk Bakery. There, I picked up an Oreo Bon Bon Cupcake and a Chocolate Cappuccino Cupcake, and, of course, another Coke refill. 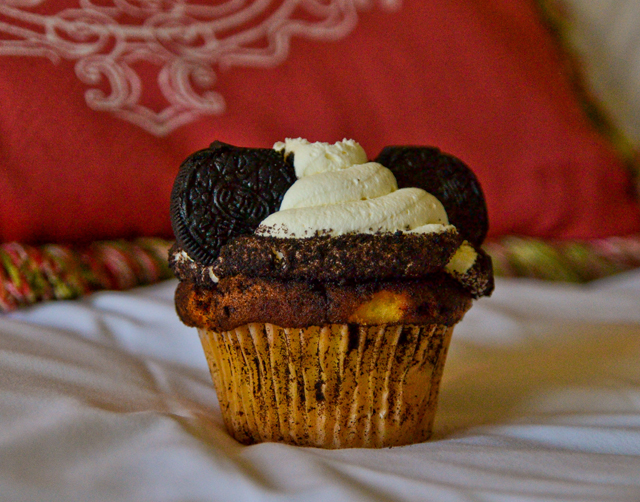 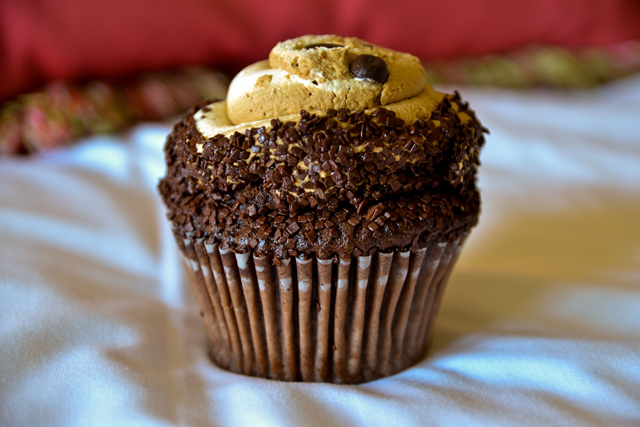 Back at our room, we consumed these glorious cupcakes (kids, there is no more nutritious way to start your day than with some cupcakes) before heading off to Disney’s Hollywood Studios.

If you want to read other parts of this report, navigate using the links below.

Trip Report Index | Next Insallment of this Trip Report

What do you think…is a rainy day at Walt Disney World better than a nice day at home? What is your favorite way to start out the day at Disney? Share your thoughts on this trip report installment in the comments!