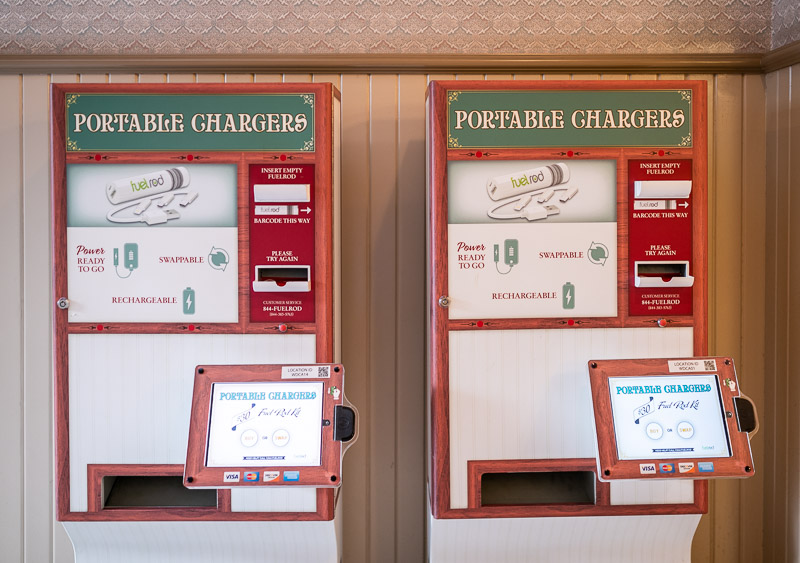 FuelRod kiosks can be found at Walt Disney World, Disneyland, airports, and other locations. The service offers reusable, portable charging to fuel or charge your phone on the go, and then swap for a fresh battery. In this FuelRod review, we’ll cover whether the “unlimited” service is worth the money and effort.

While the headline is pretty blunt, there is more nuance to the question of whether you should buy a FuelRod while visiting Walt Disney World or Disneyland. As such, we’ll address their cost v. convenience, and weigh the pros and cons. Note that this FuelRoad review is entirely our subjective assessment of how FuelRods work (or don’t) for us. You may disagree entirely, finding a lot of value in FuelRods–and that’s fine.

For those who are unfamiliar with the concept, FuelRods are portable chargers that can be purchased in Walt Disney World parks and used to (partially) recharge your iPhone or other device on the go. You can then swap for a new battery pack at FuelRod kiosks once you’ve exhausted one. In a nutshell, our view is that FuelRods are pretty great…for people who have never heard of Amazon.com…

The general concept of these portable chargers is great for Walt Disney World. Using just the My Disney Experience app alone is a big drain that people underestimate as is browsing brilliant Disney blogs to figure out where you should eat. Suffice to say, it’s easy for your battery to die early in the day. Rechargeable battery packs have existed for some time (so to that end FuelRod is hardly revolutionary), and are one of the recommended staples on our What to Pack for Disney List.

The ‘twist’ with FuelRods is that when you’re done using them, you can trade out your depleted FuelRod for a fully-charged one at the many kiosks throughout Walt Disney World and Disneyland. The appeal is thus the ‘unlimited’ charge the FuelRods offer by virtue of swapping them out. When put that way, it’s easy to see the appeal of FuelRods. 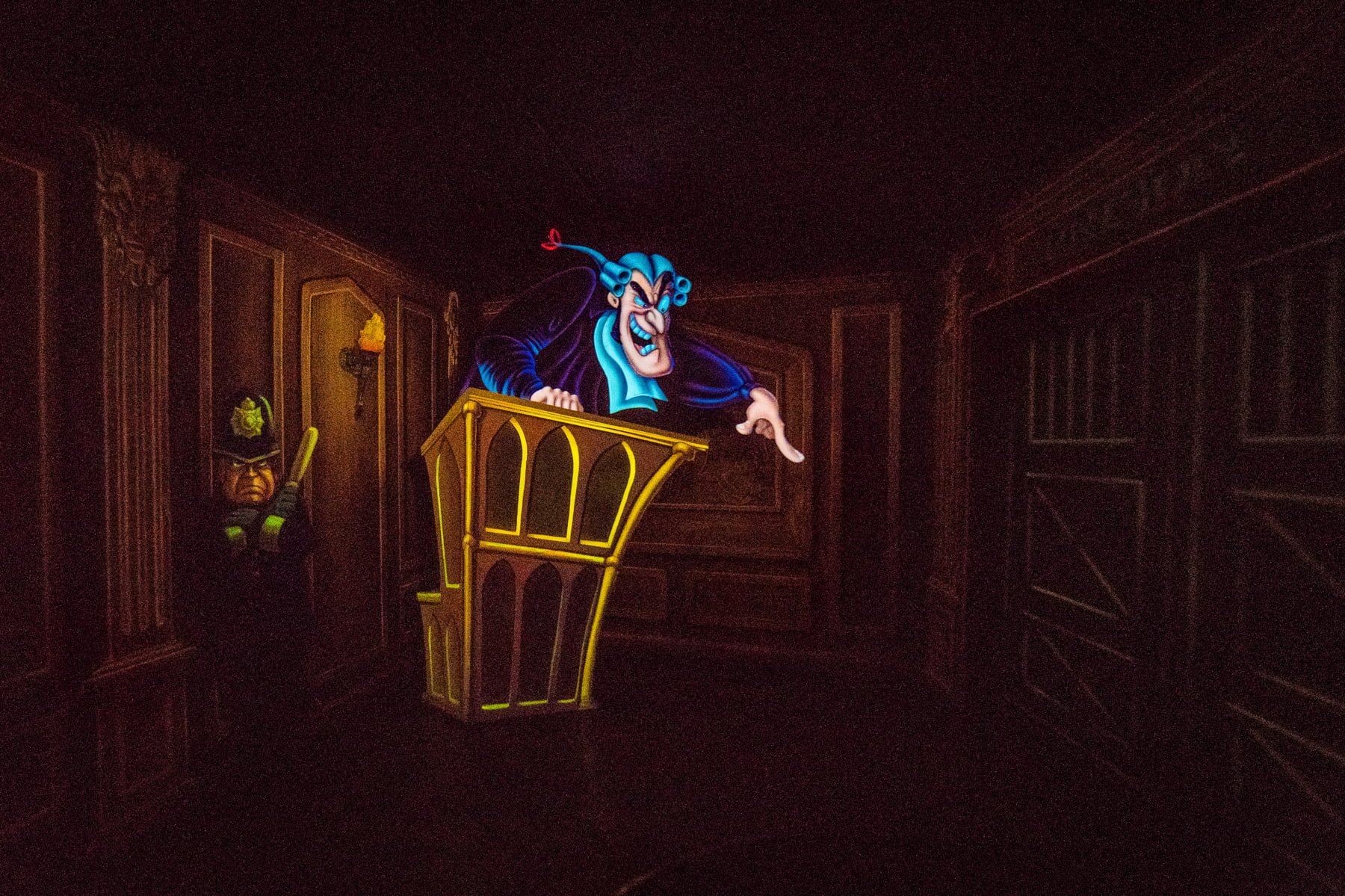 Before we get going, there are a few interesting wrinkles to FuelRod policies. Two years ago, FuelRod planned to end the unlimited free swaps of FuelRods at Walt Disney World and Disneyland. That resulted in a ton of outrage among Disney fans and angry comments directed towards FuelRod via social media.

Even more notably, fans filed a class action lawsuit against the company. After several months of negotiation, that class action lawsuit was resolved with FuelRod creating a Founders status for people who has previously purchased FuelRods as early adopters. The FuelRod Founders status allowed eligible users to continue receiving free lifetime swaps. This was verified at the kiosks with a scannable QR code or imputing an email address, which then allowed FuelRod Founders to swap their existing FuelRods for free, even at kiosks that charge to swap. 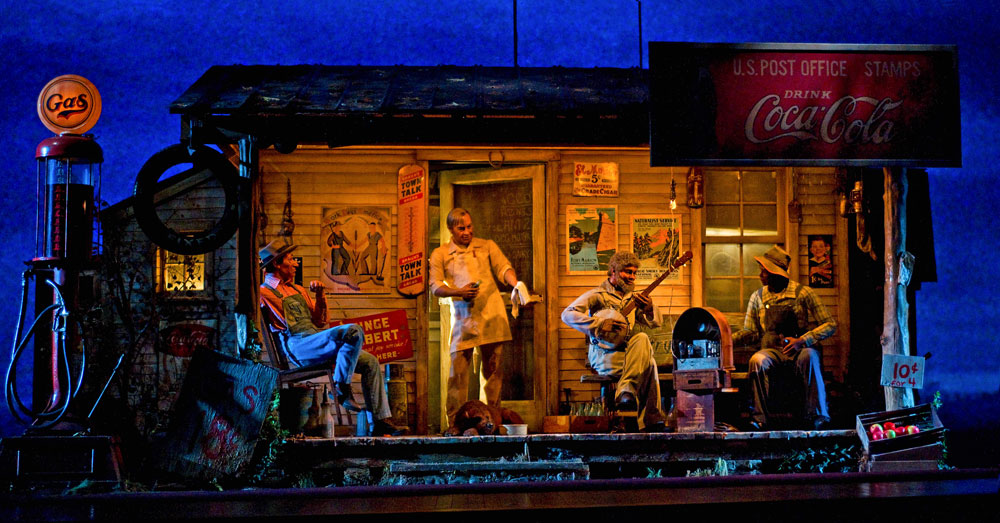 We have to give big props to FuelRod here. Even though we aren’t huge fans of the product nor do we recommend it for most people, we still think FuelRod provides a valuable service for some guests. In short, FuelRod existing but charging a fee is better than the company going bankrupt and ceasing to exist at all.

As we’ve noted, FuelRod is a good option of last resort and we’re thus happy it’ll continue to exist at Walt Disney World and Disneyland. On top of that, FuelRod’s customer service team was diligent and conciliatory throughout this, offering refunds to disgruntled customers, and FuelRod stated that they’ve been forced to implement a swap fee to “maintain standards customers expect & ensure viability of the company.” 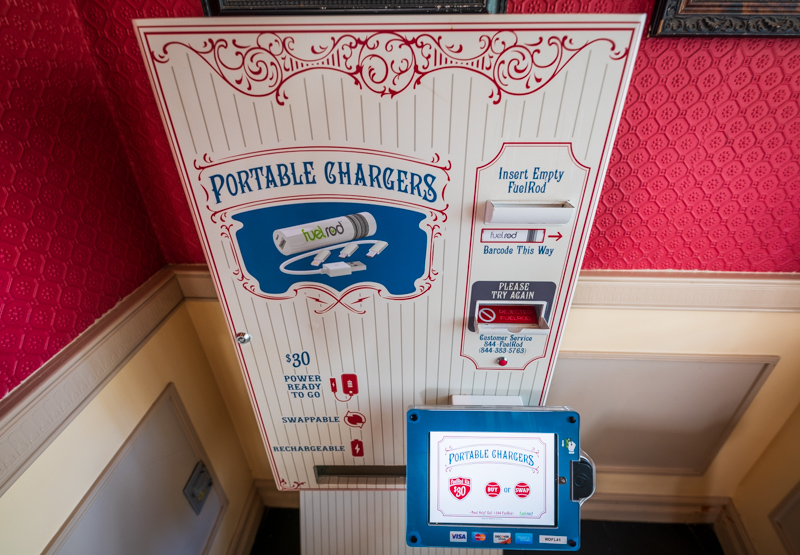 November 2021 Update: That’s not the end of the pay-to-swap saga! Sometime in the last few months, most (all?) FuelRod kiosks stopped verifying Founders status via email or QR code. We honestly don’t know when since we don’t use FuelRods.

We just happened to notice at one of the kiosks last month, and then started checking around to see if our friends (a couple of whom could be described as FuelRod advocates) whether they’ve had to pay for swaps recently. All responded that they have not. At this point, it would thus appear that swaps are free for all, rather than $3 each. This is great news for anyone who finds themselves in a pinch and ends up needing a FuelRod. 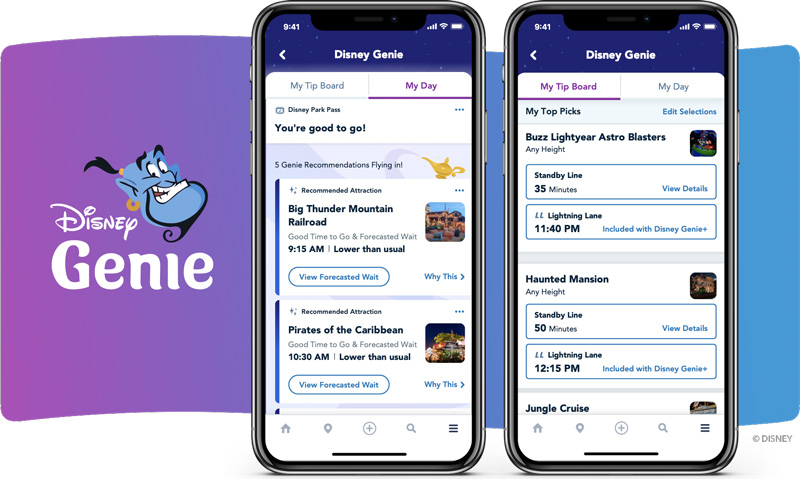 This couldn’t have happened at a better time, as the new Genie+ and Lightning Lanes at Walt Disney World and Disneyland are serious battery drains. While it’s theoretically possible to go an entire day using the Genie service without recharging, it’s very difficult. Many guests will be unprepared for this, and find themselves needing a spare battery during their days in the park.

Genie uses much more battery life than its predecessors, FastPass+ at Walt Disney World and MaxPass at Disneyland. On top of that, there are certain features, like the itinerary builder and PhotoPass AR lenses, that really kill a phone’s battery. Just ~30 minutes of playing around with the augmented reality filters took my battery down significantly. Just something to keep in mind if you’re visiting soon and don’t have a backup battery packed! 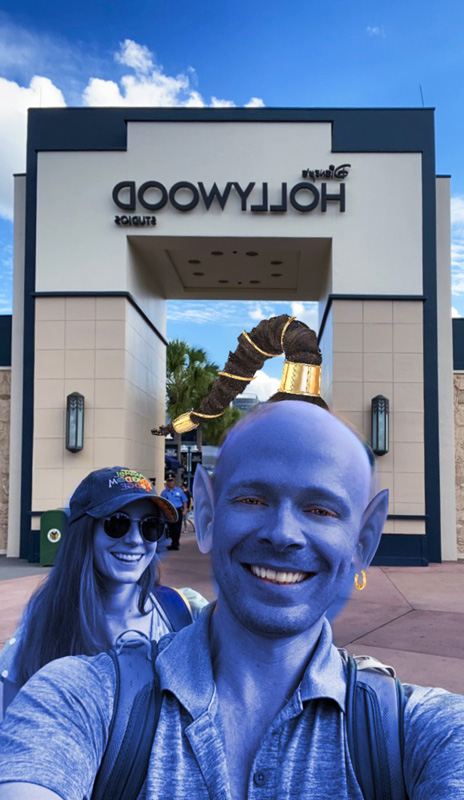 The problems with FuelRods are two-fold. First, the $30 price is very high for a battery pack of this capacity and quality. Second, the aforementioned capacity is poor by modern battery pack standards. (Although this has improved in the last couple of years, it’s still nowhere what you’d get from something from Amazon for $30. Nor is the charging as fast.) 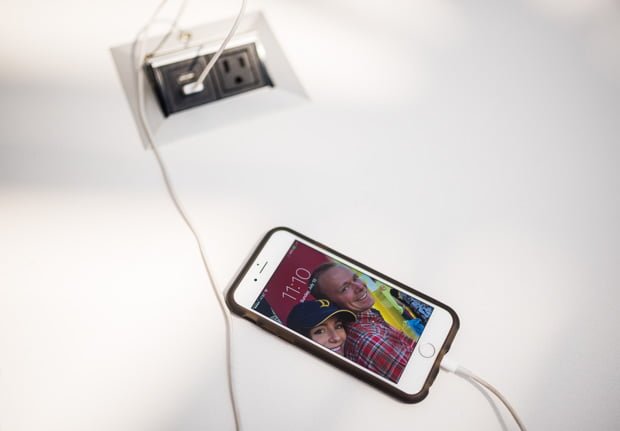 Let’s talk a bit more about FuelRod’s capacity relative to its competitors. Unlike virtually every other battery pack on the market, FuelRod does not indicate its charge capacity. (Which alone should set off red flags.) Scant information is available, but it looks like it can charge an iPhone about halfway, which would put its capacity at under 3,000 mAh.

Let’s give it the benefit of the doubt and say the FuelRod has 4,000 mAh capacity. This Anker charger offers 5,200 mAh for ~$22. Over double the capacity in a similarly-sized charger for half the cost. For under $30, you can get this Anker charger with 10,000 mAh capacity and high speed charging (this is the charger we currently use as of 2021–it’s great). That’s enough to charge multiple devices, and do so far faster than FuelRod. 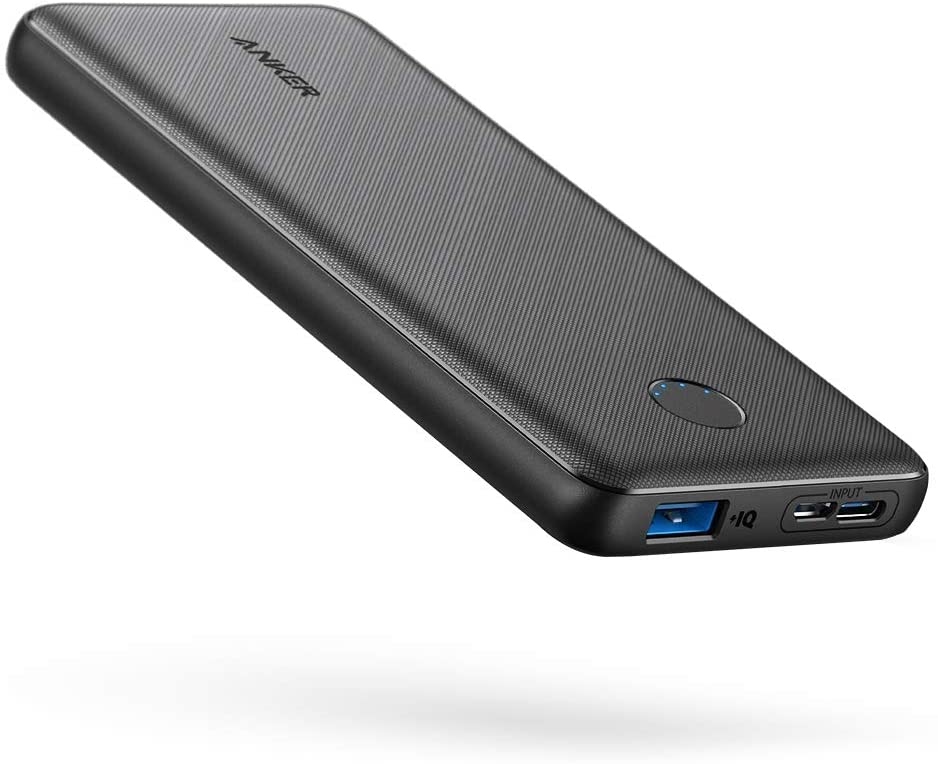 We have recommended alternatives on our packing list that offer larger capacity, lower cost, and faster charging than FuelRod. Some of these chargers will not only get you through an entire day in the parks–they’ll charge your entire family’s devices for the day.

By battery pack standards in the year 2021, FuelRod is antiquated. Unfortunately, they’re boxed into that (literally) due to the design of the dispensing machines that require maintaining the same style and size of battery pack today as 5 years ago when they debuted. Suffice to say, a lot has changed in backup battery technology in the last 5 years. 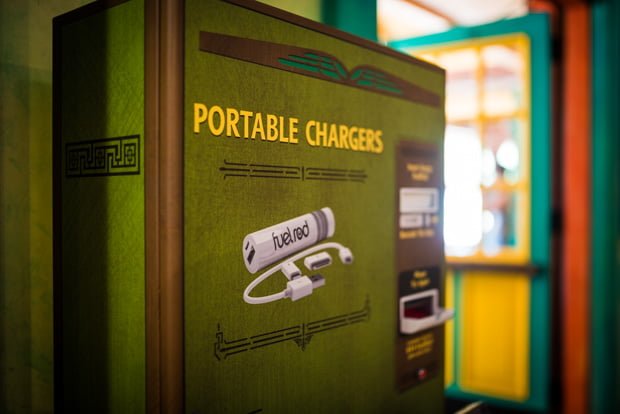 To be fair to FuelRod, the case could be made that there’s a certain convenience in never having to charge a battery pack–just being able to swap out the existing pack ad infinitum. Or that it can be a lifesaver if you forget your charger, cables, etc. True, it does offer appeal in both scenarios. There’s absolutely no arguing about FuelRod being useful if you’ve forgotten your charger/cables.

However, the case for general convenience in everyday scenarios is tougher to make. When I get back to the hotel at the end of a long day, I hate having to plug everything in before getting ready for bed. The thing is, I have to do that regardless with my camera, phone, etc. Plugging in one additional item is (literally) a <30 second commitment that hardly poses an insurmountable obstacle between me and a good night’s sleep.

Moreover, this argument is only even plausible in a world where FuelRod kiosks are ubiquitous. Such a world does not exist, nor will it ever exist. FuelRod’s business model relies upon spontaneous purchases from consumers who either don’t do the research or don’t have a viable alternative. Outside of airports, theme parks, and similar ‘vacuums’, they will lose to competitors. (For the same reason that no one in their right mind would pay $14 for a cheeseburger at Cosmic Ray’s if it were located in their hometown.) 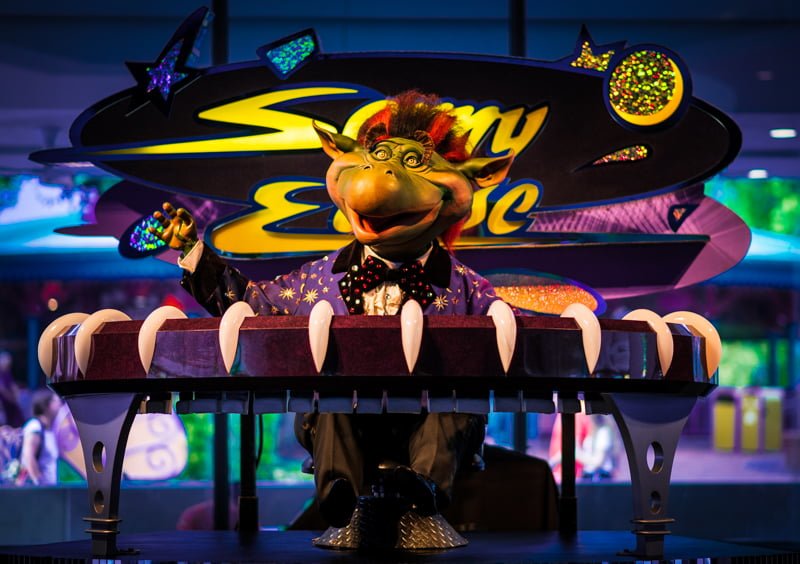 If you’re primarily concerned about using FuelRods at the airport, Walt Disney World, or Disneyland–that’s great. FuelRod probably has you covered. For Disney regulars or Annual Passholders, there is value in FuelRod. Again, we’re not saying this is a totally useless service or product.

Ultimately, the only people for whom I can see FuelRod holding appeal once they get past the initial idea of convenience is those who have never heard of rechargeable batteries before stumbling upon the FuelRod kiosk while in the parks. Yes, these people do exist. We see countless guests sitting in corners charging their phones in random outlets during the course of their vacations.

For those people (or people who simply forget to pack their portable chargers), the FuelRod presents a good spontaneous purchase, as the cost (in time) of sitting in a random corner everyday during a pricey Walt Disney World vacation far outweighs even the $30 cost of a FuelRod. However, if you’re reading this FuelRod review in advance of a trip to the park and have the opportunity to order a higher capacity battery pack from Amazon, that’s your better option.

What do you think of FuelRods? Will you continue to use FuelRods if they end free unlimited swaps and start charging for them? Are you a FuelRod Founder? Do you agree or disagree with our FuelRod review? Any questions we can help you answer? Hearing your feedback–even when you disagree with us–is both interesting to us and helpful to other readers, so please share your thoughts below in the comments!

306 Responses to “We Don’t Recommend FuelRods”