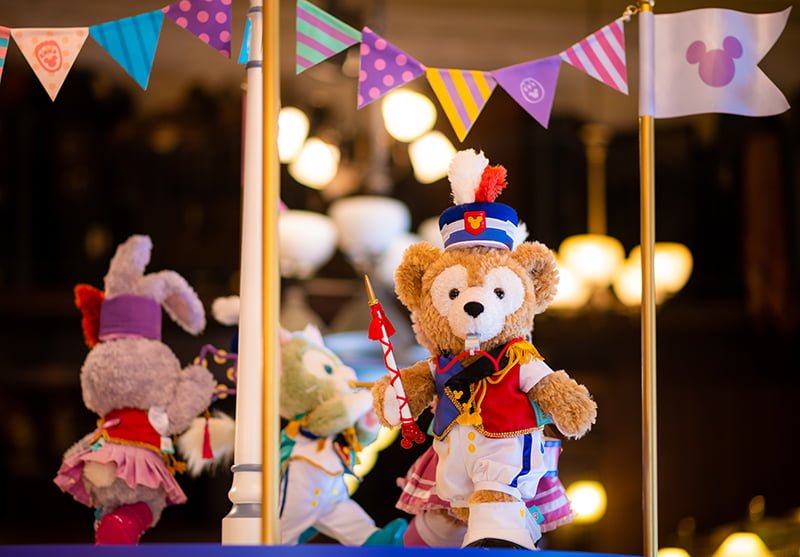 Well, “we” didn’t adopt it so much as Sarah did, but I have to admit that I was okay with it. The new “Happy Marching Fun” Duffy and Friends items available at Tokyo DisneySea are pretty kawaii. We’ll take a look at this new ShellieMay, Gelatoni, StellaLou, and Duffy merchandise in this post–and share some of our adopted Duffy’s Tokyo DisneySea adventures.

Happy Marching Fun is a quasi-35th Anniversary Celebration thing. There are marching band-inspired decorations around Cape Cod, and elsewhere in Tokyo DisneySea, that seem like a nod towards the Happiest Celebration without explicitly referencing it. Then again, pretty much everything is a celebration to Duffy & Co., so perhaps I’m reading too much into it.

I’ll be honest with you: the only reason this post exists is because I had time to kill in McDuck’s while Sarah was trying to determine which “Happy Marching Fun” items to buy so I thought I’d take some photos of the items on display. That posable Duffy had a $45 “adoption fee” and–spoiler alert–wasn’t the only Duffy item we adopted. (We adopted so many Duffy items I could have adopted a new lens instead!)

With that said, I do have to admit that Happy Marching Fun is the coolest Duffy and Friends event we’ve experienced at Tokyo DisneySea in recent memory (since at least Journeys with Duffy, which probably scored a lot of points because it was a “greatest hits” 10th Anniversary celebration). In fairness, pretty much all of these Duffy festivities are superficial–they feature some lighthearted decorations, special menus, and a new slate of merchandise, but nothing in the way of special, themed entertainment.

Given this, you might think that these events would come across as crass attempts to peddle new merchandise. While selling items is no doubt the underlying motivation, it never feels like a cheap cash grab. Even though we haven’t purchased any plush in the past (Sarah has a few Duffy & Friends purses), we’ve always found these special events endearing.

In our “Duffy Phenomenon at Tokyo DisneySea” post from a few years ago, I discuss how Duffy’s charm offensive just works in Japan, and how the character’s presence and popularity feels sincere. Not only have guests embraced all things Duffy (so none of this feels forced), but there’s a disarming innocence to it all. It’s hard not to smile when Duffy’s promotional campaigns offer tag-lines like “Happy Marching Fun” or “Sweet Duffy.”

My favorite Duffy special event is still Mickey & Duffy’s Spring Voyage, which was the celebration during our first visit to Tokyo DisneySea. There actually was entertainment for that event, which gave it a bit more substance. I also really liked the floral decorations and preppy merchandise. (I’ve also liked some of the winter merchandise–Duffy in a duffle coat is a classy look.)

With that said, Happy Marching Fun is a close second for me. As always, there’s a lot of clever merchandise; it seems like Tokyo Disney Resort’s best designers are always put on the Duffy stuff. Even though I’ve never been in a marching band and can’t even play an instrument, I think these designs are fun and eye-catching.

I think most of these items speak for themselves, so I’ll only offer limited commentary along with my photos of the Happy Marching Fun Duffy merchandise: 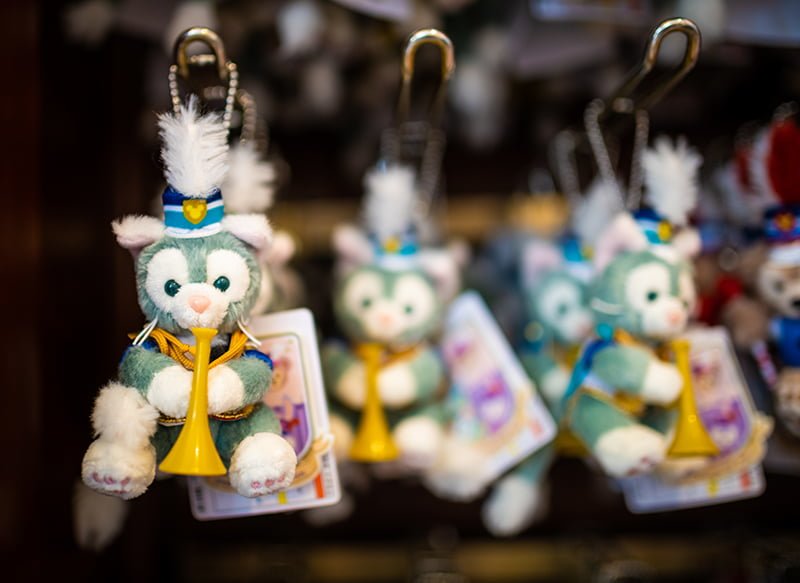 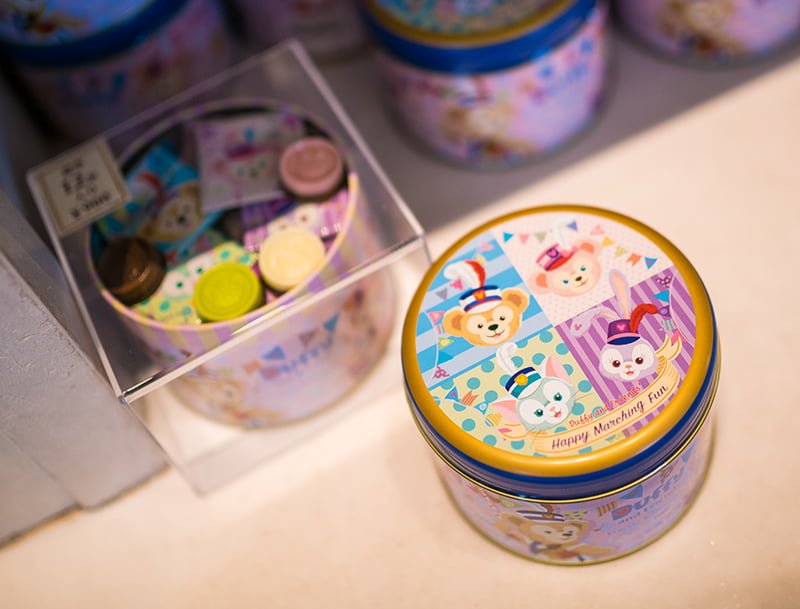 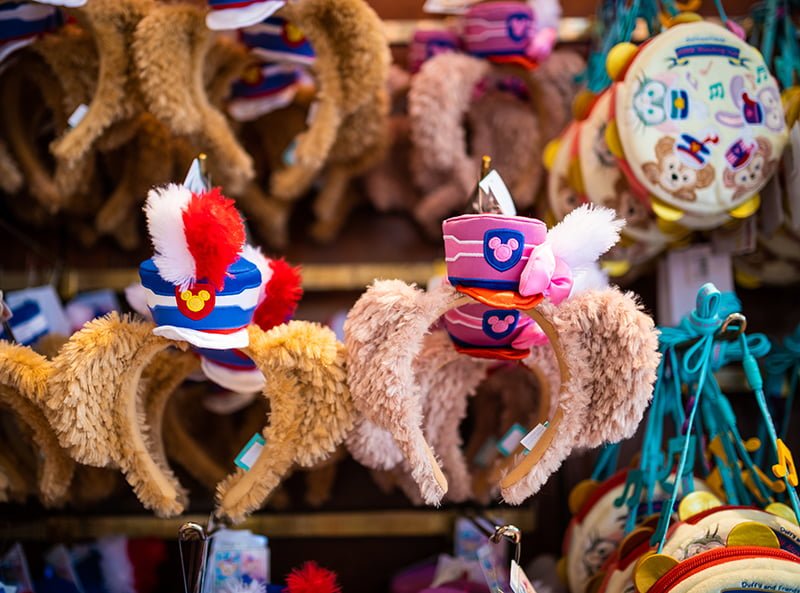 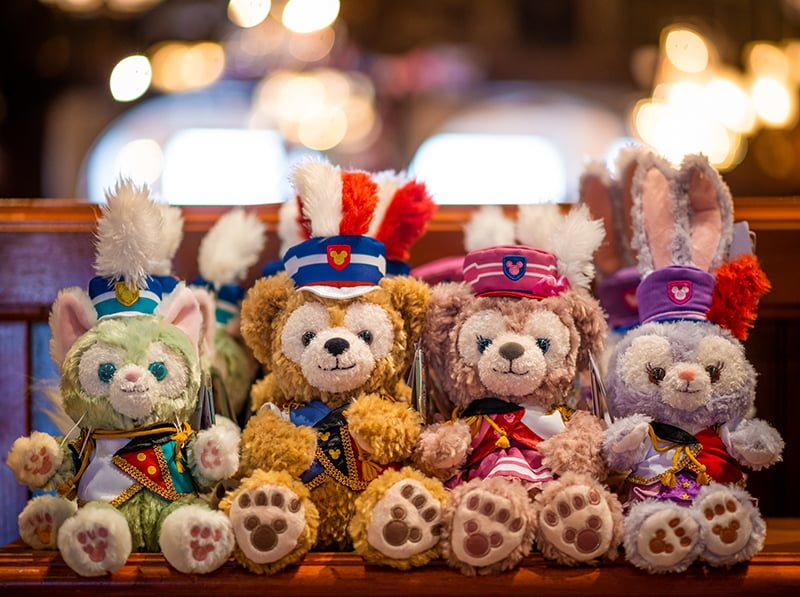 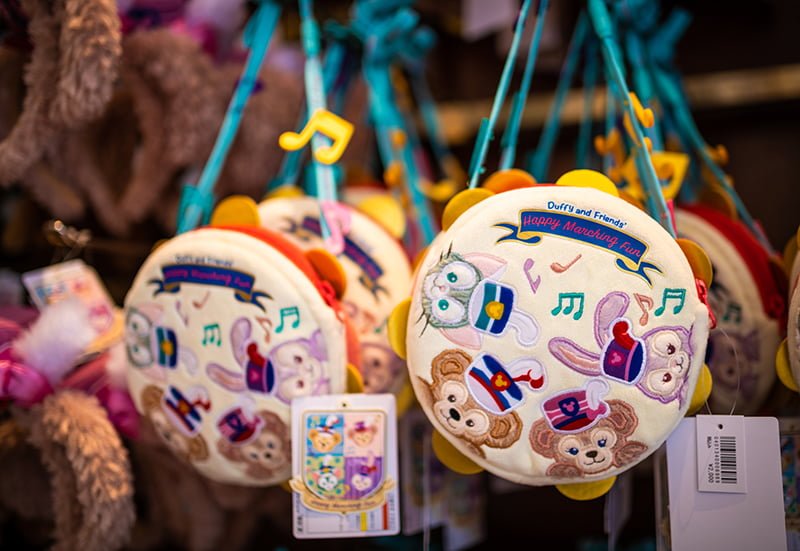 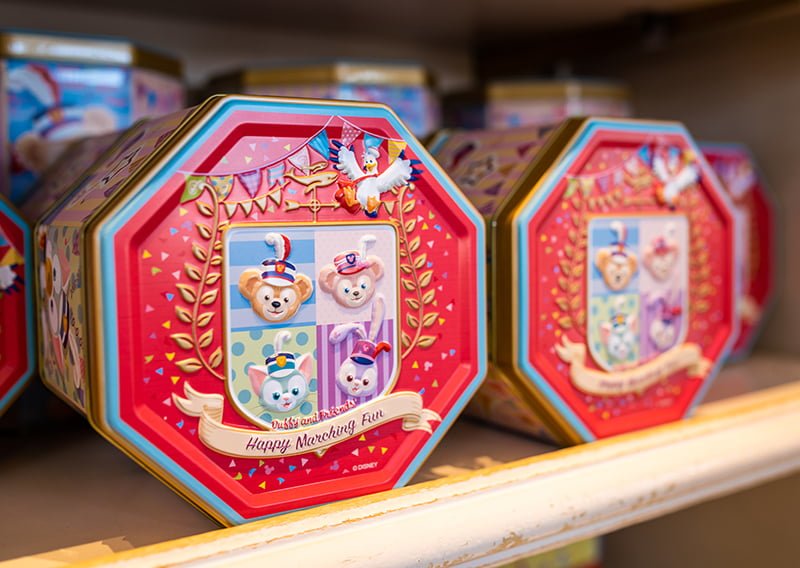 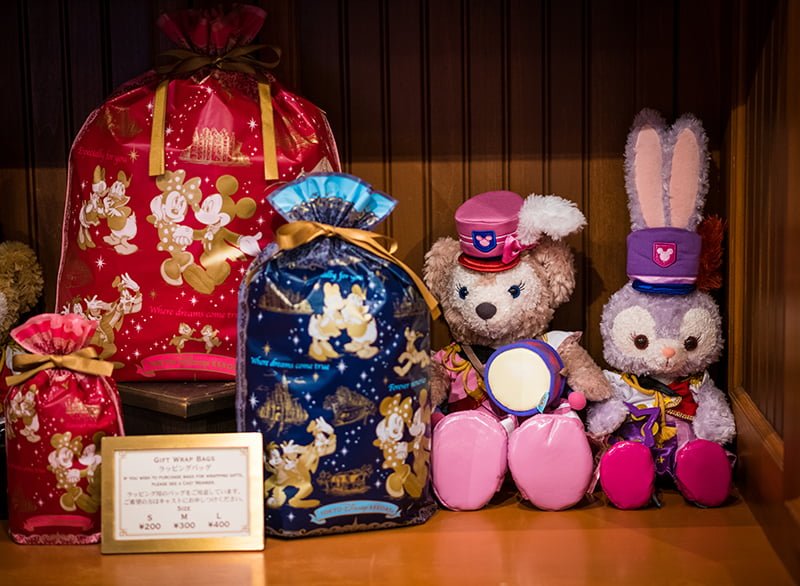 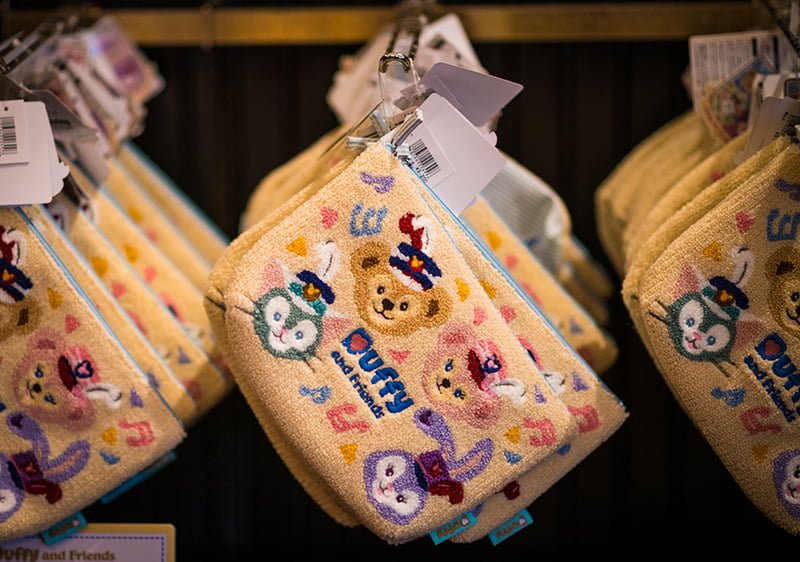 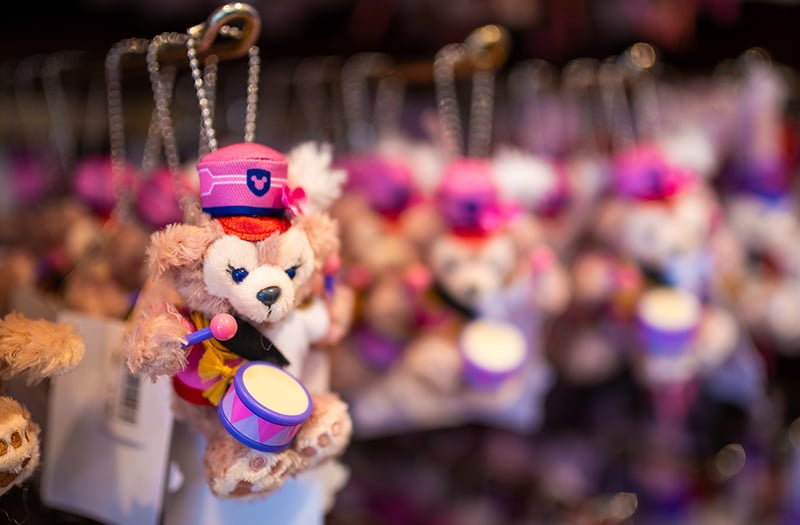 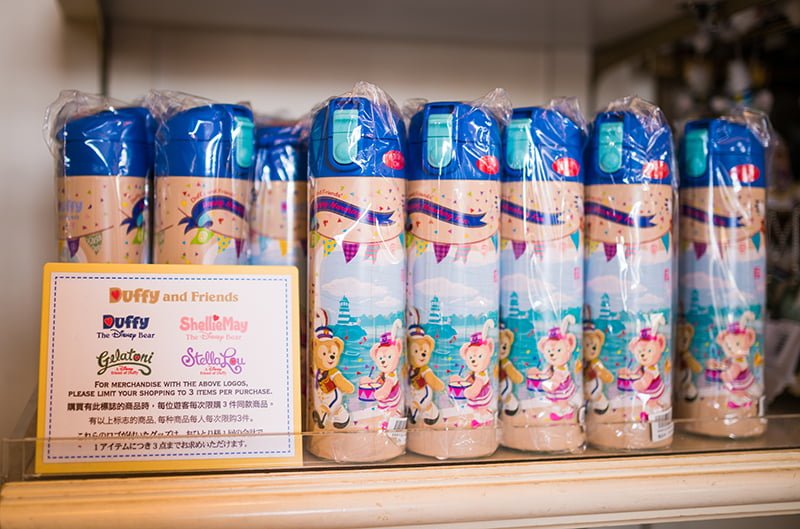 You read that sign correctly–you’re limited to three Duffy and Friends items per purchase. This might come as a surprise to anyone who remembers the “heyday” (and those are most definitely air quotes) of Duffy in the U.S. parks, when he had a ton of merchandise that mostly sat on shelves.

In Tokyo DisneySea, Duffy merchandise draws huge crowds of collectors on its release dates, and some items sell out almost instantly. Open edition items stick around longer, but there’s a robust secondary market–both in collectible shops in Tokyo and online (ironically enough, some of these items end up with English eBay listings and offering shipping to the United States!).

The Happy Marching Fun special event will likely end on August 22, 2018 (it’s not totally clear since this is not a special event explicitly listed on Tokyo DisneySea’s calendar). All items pictured here are sold only in Tokyo DisneySea (not Tokyo Disneyland or outside the parks) in select stores throughout Cape Cod/American Waterfront and Mediterranean Harbor.

Now, as promised, here are some of the zany adventures of our adopted Duffy: 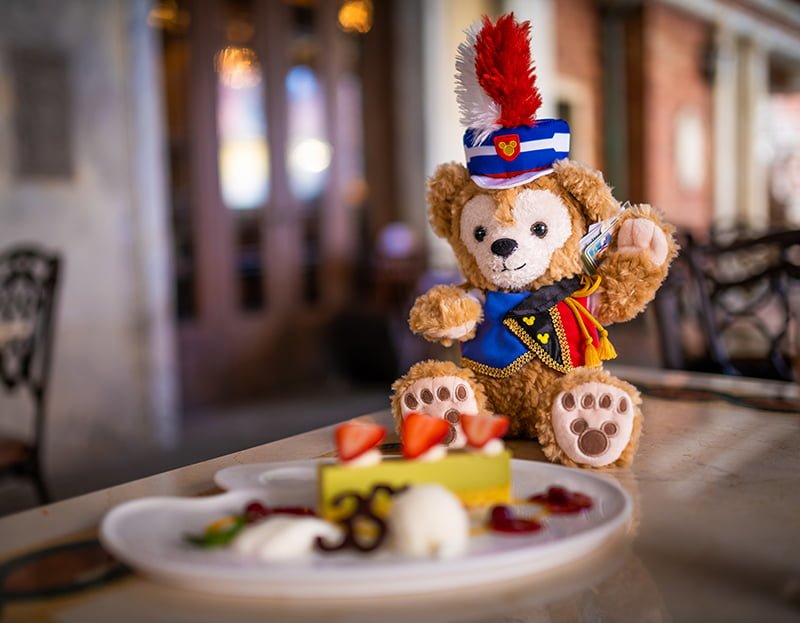 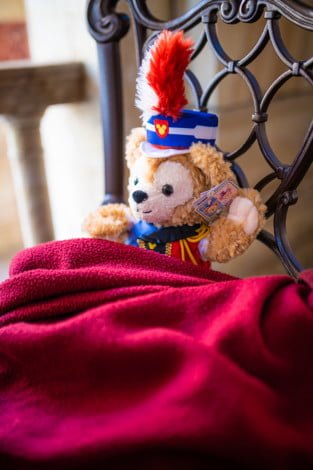 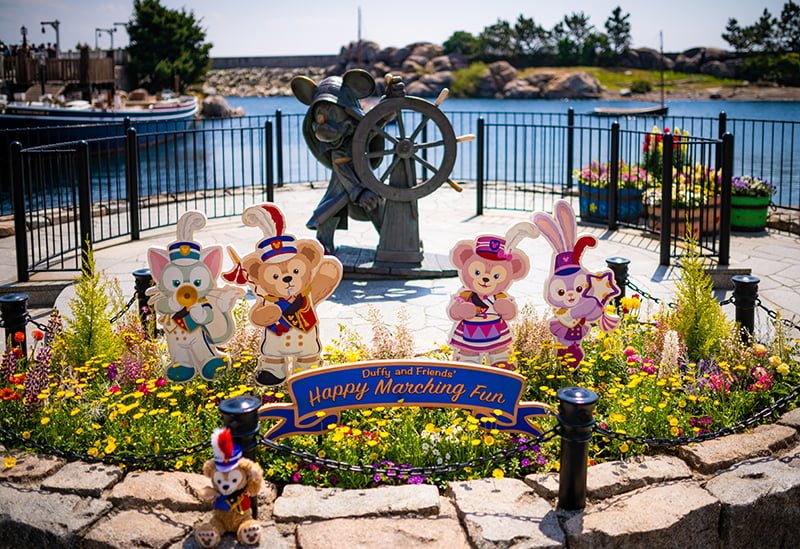 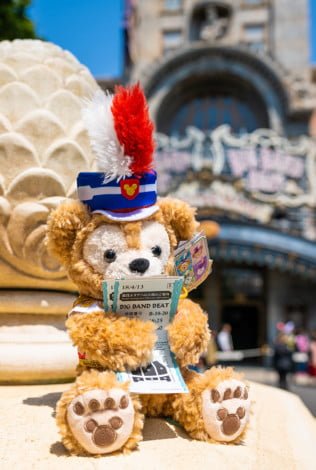 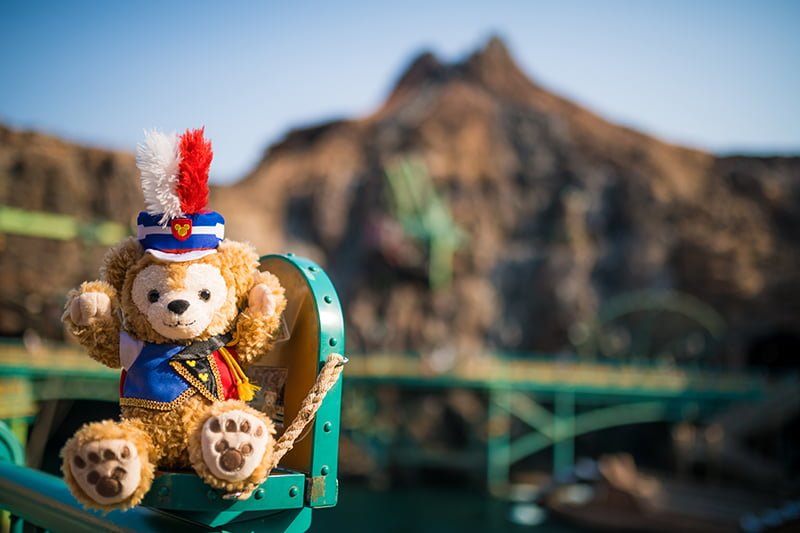 Okay, “zany adventures” is definitely hyperbole. In reality, the most exciting thing Duffy did was occupy a seat at our tables when we had meals. We also took him around to the various Duffy photo spots and took photos of him there, and also used him to hold our Big Band Beat lottery tickets.

He did have one adventure, and that was when the wind came off of Mediterranean Harbor and knocked him off of his photo stand, plunging him like 10 feet to the ground below. He came really close to falling into the water, but thankfully landed on some crates instead. There was an audible gasp from guests around us when this happened, which made me chuckle in retrospect. (At the time, my heart skipped a beat, fearing that we were about to lose this expensive stuffed animal the same day we bought it!)

What do you think of the Happy Marching Fun Duffy & Friends merchandise? Are you a fan of these items, or is Duffy still “not for you”? Any questions? Hearing your feedback is both interesting to us and helpful to other readers, so please share your thoughts below in the comments!