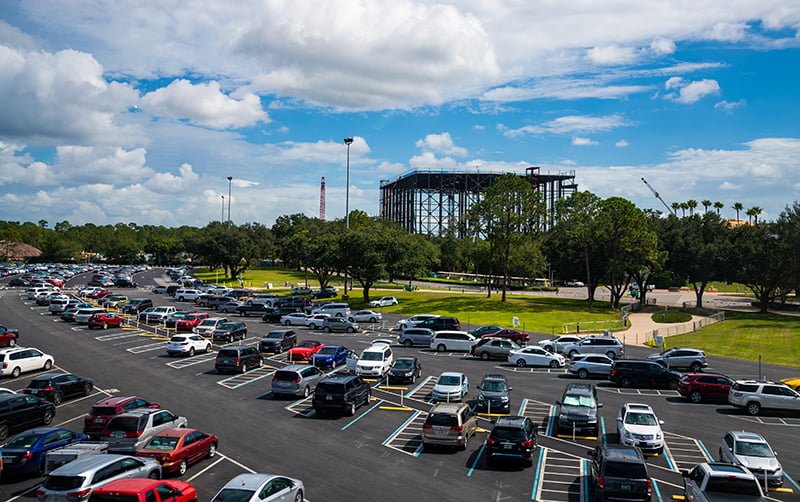 Epcot is up next for our October 2018 Walt Disney World updates. We’ll cover construction progress on the Guardians of the Galaxy coaster and Ratatouille trackless dark ride, plus a few other random stops in World Showcase and Future World.

Arriving via monorail, the first thing you’re going to notice–even before Spaceship Earth–is the Guardians of the Galaxy coaster construction towering above a sea of parked cars. It’s truly a majestic sight to behold. Some might say it’s like a grand and miraculous show-building.

Before we get to the progress photos of the Guardians of the Galaxy building, one thing I think worth addressing here is the degree to which Walt Disney World is a ‘construction zone.’ We’re doing these updates on a monthly basis now, and the sheer number of them can make it seem like there’s a ton of construction in the parks, especially since we don’t have corresponding “Walt Disney World Status Quo Reports.” (As exciting as those would be…)

Suffice to say, there is an unprecedented amount of construction right now at Walt Disney World–billions of dollars worth, in fact. However, the amount of the work that actually impacts the guest experience is minimal. At Epcot, the only major project in a guest-facing area is this Guardians of the Galaxy addition, which affects guests to the extent that the old Universe of Energy attraction is closed and walled off.

Although we enjoyed Universe of Energy a lot, it was far from a guest favorite. Part of this is because it was in an out-of-the-way location, meaning that the construction there also doesn’t impact guests much. The Ratatouille ride, Skyliner, and Japan steakhouse (the other projects of significance) are all outside guest areas.

In fairness, this could all change by 2019. If the Epcot Central Spine Redesign still happens, it will have a huge impact on the front of the park, and even if Walt Disney World attempts to minimize that by carrying out the project in phases, it’ll still cause crowd flow issues. That’s pretty much inescapable–but it’s a project that desperately needs to happen, and also one that should not result in the closure of any attractions.

Anyway, the point here is that even though two E-Ticket attractions are under construction right now at Epcot, it’s not an active construction zone that you’ll want to avoid because of all the projects. If anything, I’d argue that Walt Disney World needs to be even more aggressive with the work at Epcot, as people are skipping it for other reasons.

With that said, here are some looks at the Guardians of the Galaxy show-building from the monorail: 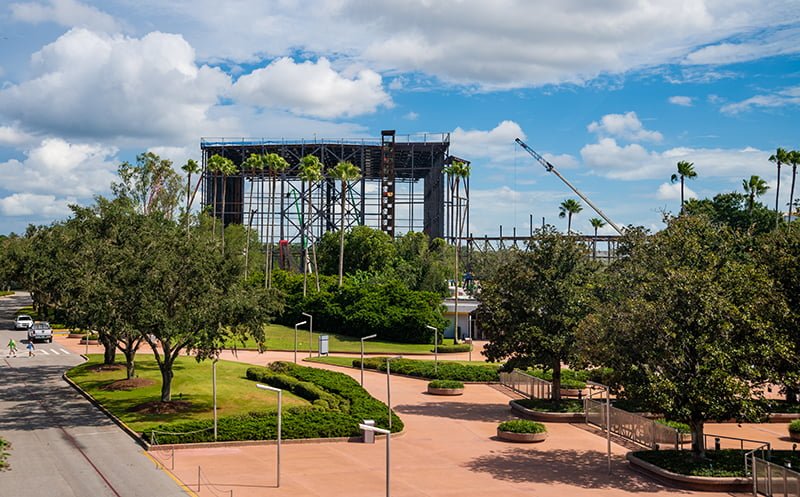 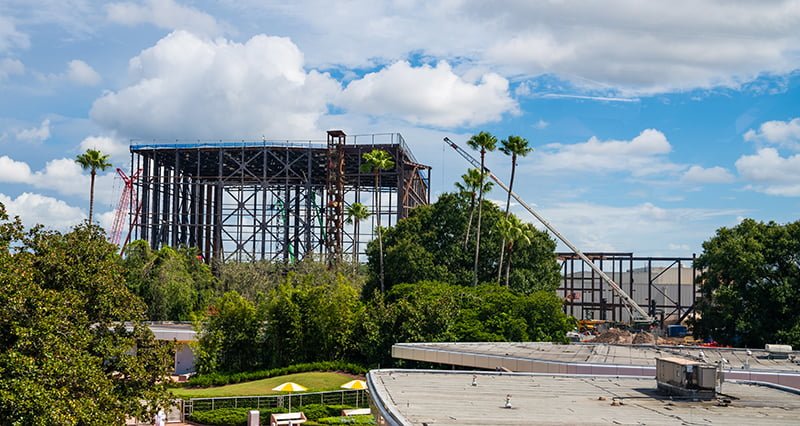 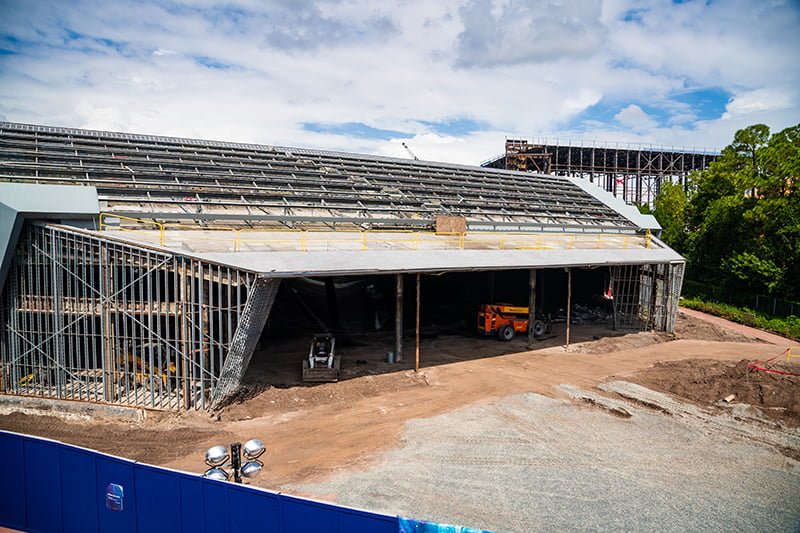 As you scroll through the photos, you might not notice a ton of progress on the main structure, but more work is occurring lower, and it’s also possible to see how this tall building will connect to what’s left of the existing Universe of Energy facade. 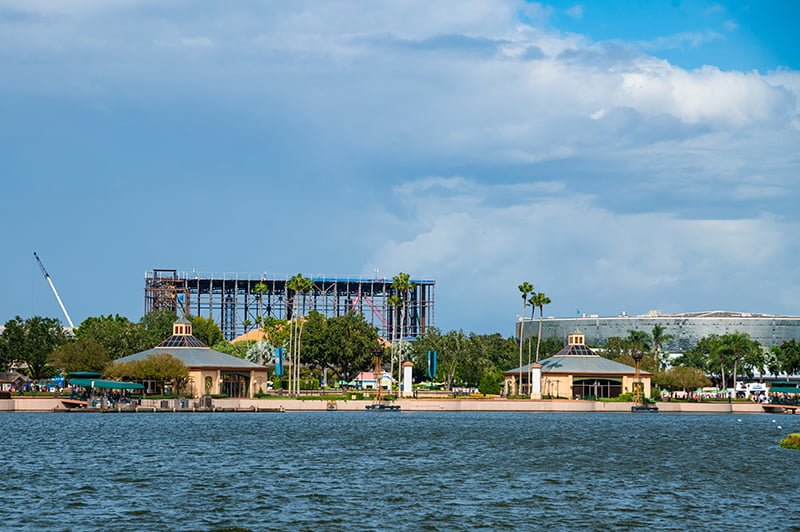 Perhaps my eye is just not sufficiently astute, but it seems like not a ton of progress has been made on this structure’s shell in the last ~90 days. I wonder if this is intentional–enclosing the structure right now is a risky proposition, especially during the heart of hurricane season when a lot of work could quickly be undone.

This project has otherwise moved at a fast pace, so it’s possible lower-level work is being done now, with the intent on doing serious enclosure work starting in November or December. That’s totally uninformed speculation on my part, so anyone with construction expertise, feel free to contradict me in the comments. 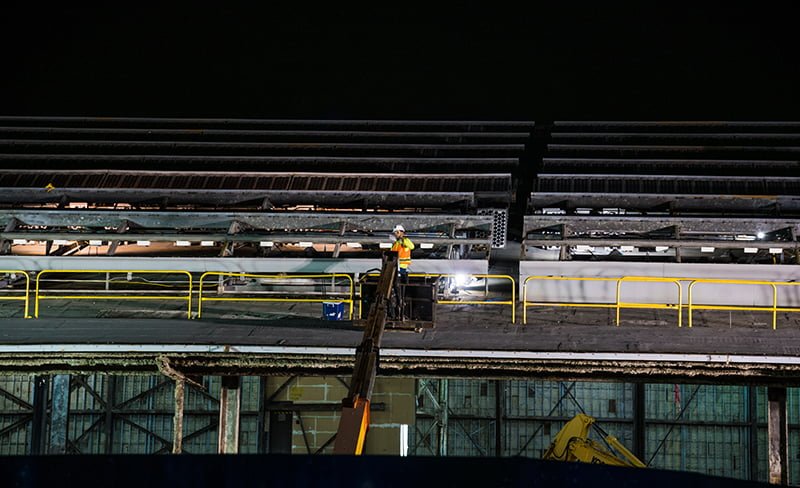 While leaving the park late one night after the conclusion of Extra Magic Hours, we noticed work being done on the top of the Universe of Energy building.

Turns out the solar panels were being removed. 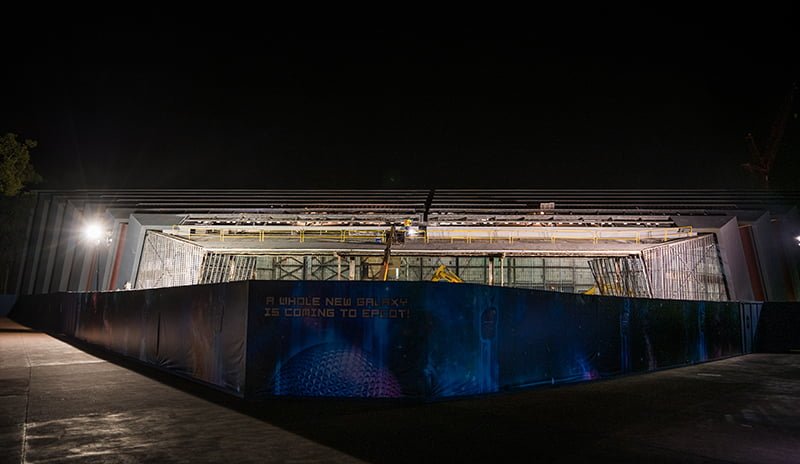 We watched this work for a good 5-10 minutes, as it was interesting and much easier to see inside the Universe of Energy building with the artificial light inside and the dark sky.

One thing that caught my attention was the care with which the solar panels were being removed. They were not being smashed or tossed down as has been the case with other aspects of the building, leading me to believe they’ll make a return. 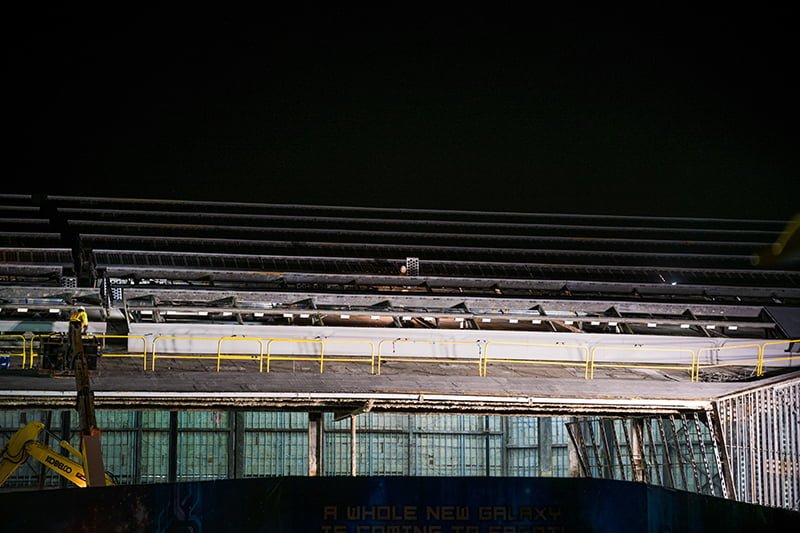 It still remains to be seen what nexus this Guardians of the Galaxy attraction will have to energy or even Future World, but there are potential options for giving it at least a loose connection.

While this will never appease the staunch traditionalists (like me), it will certainly placate fans to a degree, and I really hope it happens. Use the Infinity Stones to demonstrate energy in the queue and contrast that to other means of power–I don’t know. Anything is better than just saying “Peter Quill visited Epcot as a kid!” 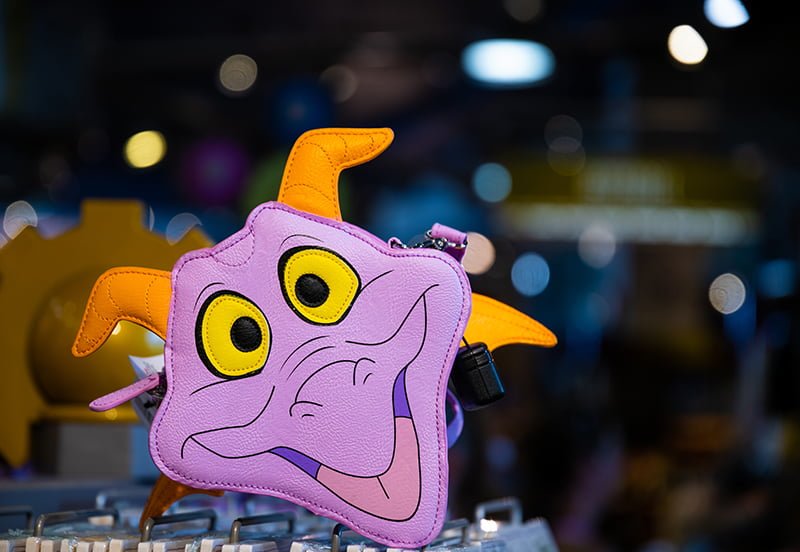 If Figment related news, there’s this new purse. It’s $65 and both larger and thicker than a coin purse.

I’m probably not the world’s foremost authority on purses, but I’m not a fan. It looks cheaply-made and clunky. I do appreciate more Figment merchandise and also like the character model chosen for Figment here, though. 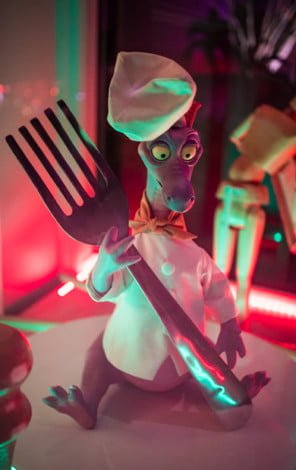 In unequivocally positive Figment news, Chef Figment has brought his giant fork back to the window outside Art of Disney (Spacesuit Mickey & Minnie have been reunited and relocated to a window at MouseGear). 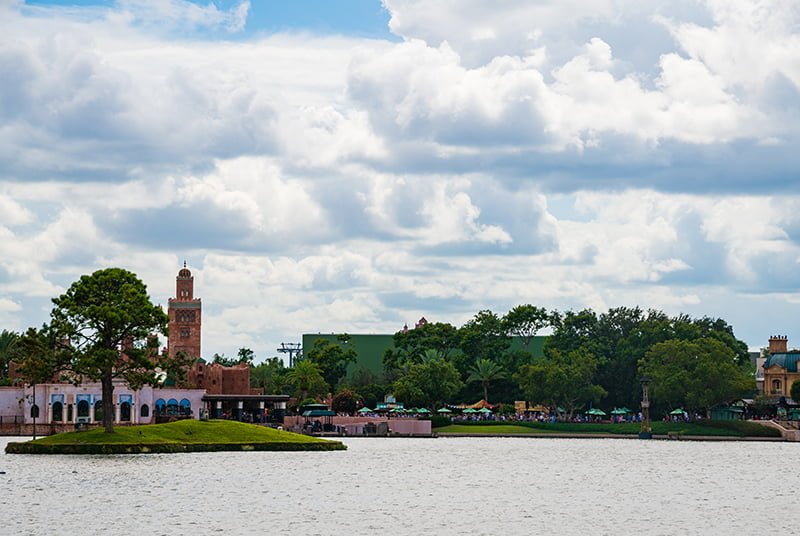 Progress continues on the Ratatouille dark ride show building at a brisk pace. The exterior is now almost fully enclosed, and appears ‘go away green’ from across World Showcase Lagoon.

If you weren’t looking at photos of it shot with a telephoto lens, you probably wouldn’t bat an eye. It blends pretty seamlessly behind the trees that conceal the parcel between Morocco and France. I really don’t think this is going to cause any sightline issues. 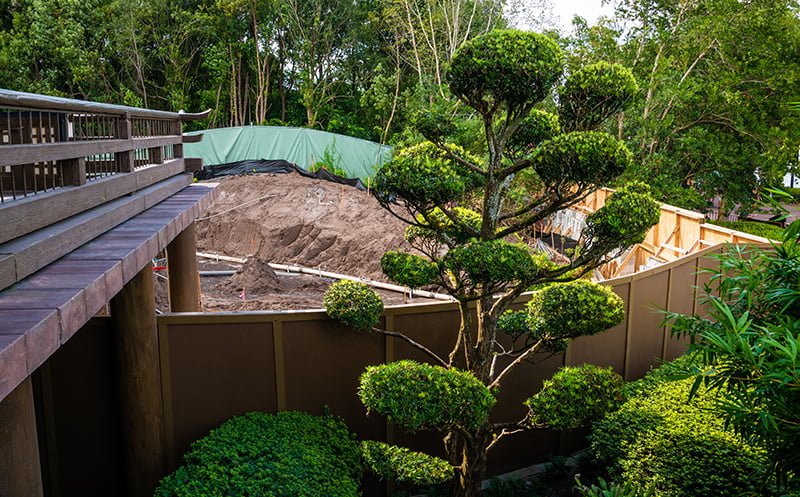 Deeper in World Showcase, trees have been cleared for the Signature Restaurant being added to Japan, and work continues on the other side of the construction wall that’s up.

Still no word as to when this restaurant will open or what it will serve. 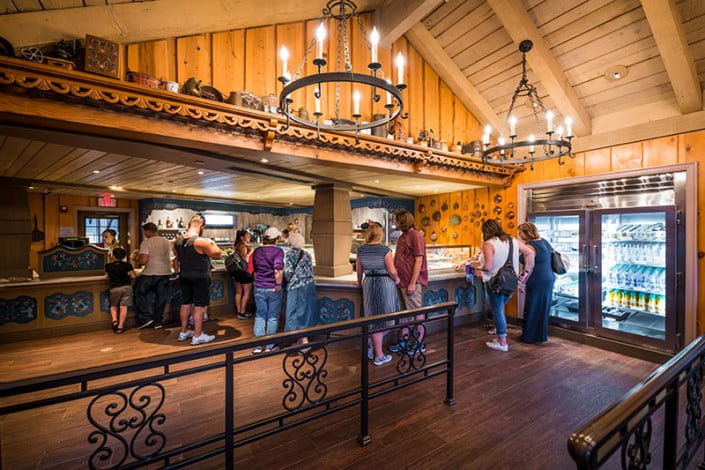 Moving along to Norway, the lengthy refurbishment of Kringla Bakeri Og Kafe is finally completed. Somehow, Kringla Bakery is now roughly twice the size it was before (space that was carved out from backstage, we assume?) and has a queue that isn’t nearly as cramped.

As we wrote in our Kringla Bakeri og Kafe Review, this is our favorite bakery in Epcot–even better than France! 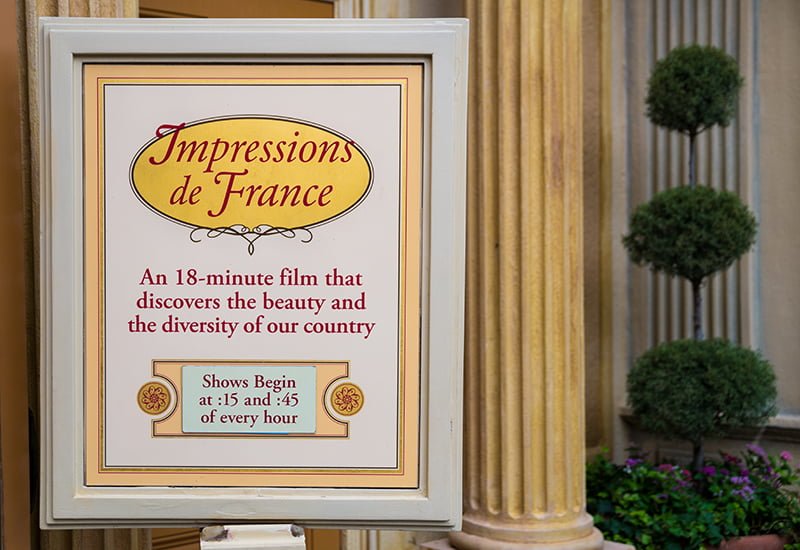 Speaking of which, and not in any way an actual “update” as this has been the case for at least a year, but here’s a friendly reminder that you can catch Impressions de France on the :15 and :45 of every hour.

As we shared in our “Impressions de Bricker Trip Report” a couple years ago, one of our bucket list goals is to visit every filming location from Impressions de France. Most Walt Disney World guests never do this attraction, and that’s a real shame. It’s by far the best film in Epcot–and that includes Soarin. 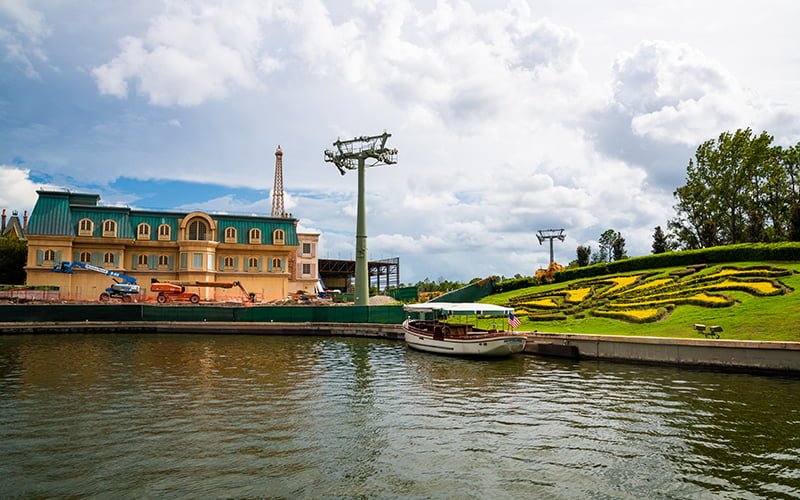 Finally, a stop outside International Gateway to catch a glimpse of construction progress off to the side of the France pavilion and behind it.Work continues at a fast pace, and we assume this expansion of France will have no issue making a 2020 opening.

That’s it for this update from Epcot. We’ll report back in November for the start of the Epcot International Festival of the Holidays, which will give us an excuse to sample everything from those marketplaces!

What do you think of the current state of Epcot, and its construction projects? Are you concerned about the Epcot Central Spine Redesign? Excited for upcoming holiday season at Epcot? Thoughts on the colossal show building for Guardians of the Galaxy, or how (if at all) the ride will relate to energy…or Future World, period? Any questions we can help you answer? Hearing your feedback is both interesting to us and helpful to other readers, so please share your thoughts below in the comments!