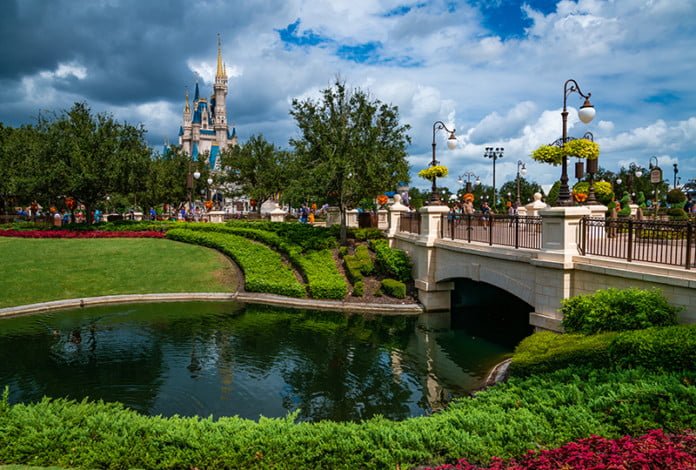 We return to Magic Kingdom again for a fall visit to check on the current status of several projects around the park, including Club 33, Tron Lightcycle Power Run, Haunted Mansion, and more.

Despite it being October, Halloween at Magic Kingdom is not on the agenda, as we covered that back in the true “heart” of Halloween season, August. You can revisit our 2018 Mickey’s Not So Scary Halloween Party Photo Report and Fall Snack Guide to Walt Disney World for more on spook season, which is now entering its true peak at Magic Kingdom.

Several other projects continue at Magic Kingdom without much in the way of visible progress. Chief among these are the Space Mountain exit, Prince Charming Regal Carrousel work, and Main Street facades. Refer to our September Magic Kingdom Update for progress on those. With that said, let’s dig into the update…

Before we head inside Magic Kingdom, we’ll board the DTB news chopper for a bird’s eye view of progress on the Tron Lightcycle Power Run construction area.

Unfortunately, the helicopter is in the shop, so we’ll have to settle for going to the Top of the World Lounge at Bay Lake Tower. Pretty much the same thing as a helicopter, anyway. 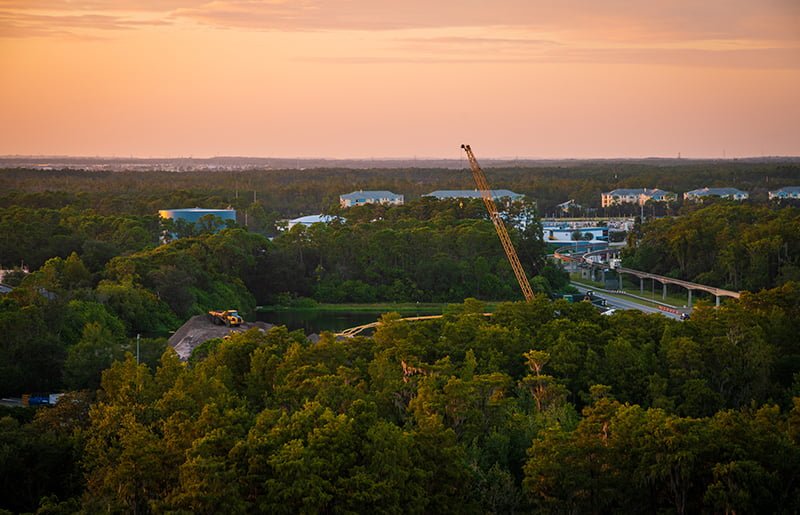 Because I am extremely dedicated to these construction updates, not only did I make the trek to Top of the World Lounge just for these photos, but I also went at sunset, so you’d be able to see the Tron construction area in perfect lighting. (I may or may not have taken a bunch of photos of Cinderella Castle and Magic Kingdom while I was there, but it was mostly about the construction pics.)

As you can see…there’s not much to see. Looks like a bulldozer is playing king of the dirt mound, but that’s about it. 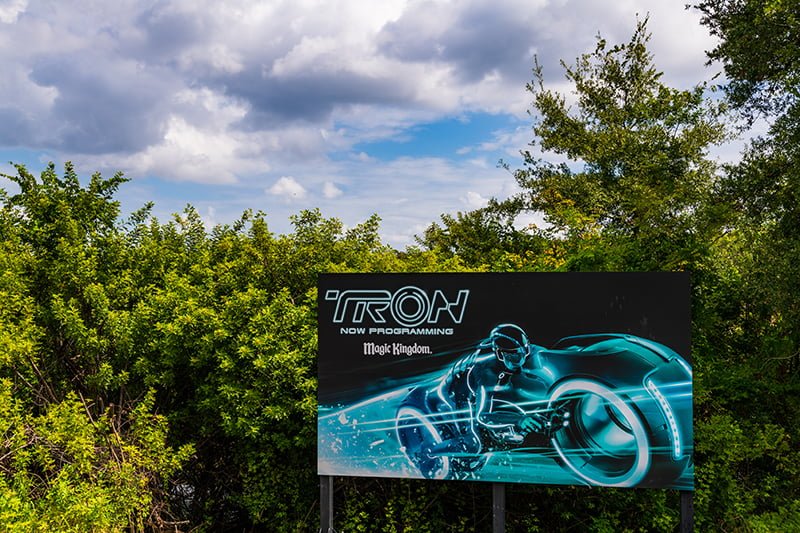 Inside Magic Kingdom, even less is visible. Here’s a view from the Tron billboard that’s up along the Walt Disney World Railroad line by Storybook Circus.

I do question why the Railroad needs to go down in December. As I speculated in our post about this closure, this strikes me as being more about operational savings than it does strict necessity. With numerous cutbacks announced since then, I think that theory is even more plausible.

There’s no way the Tron showbuilding is fully constructed another ~2 months from now (they’ll be lucky if it’s vertical at all), and the portion of construction that should impact the Walt Disney World Railroad is towards the end of construction, not the beginning. I really hope the scope of the project has changed and this truly is a necessary closure. We could be waiting ~2 years for the Walt Disney World Railroad to reopen, so this better be “worth it.” (And by that I mean we better get some Railroad dinosaurs out of the deal.) 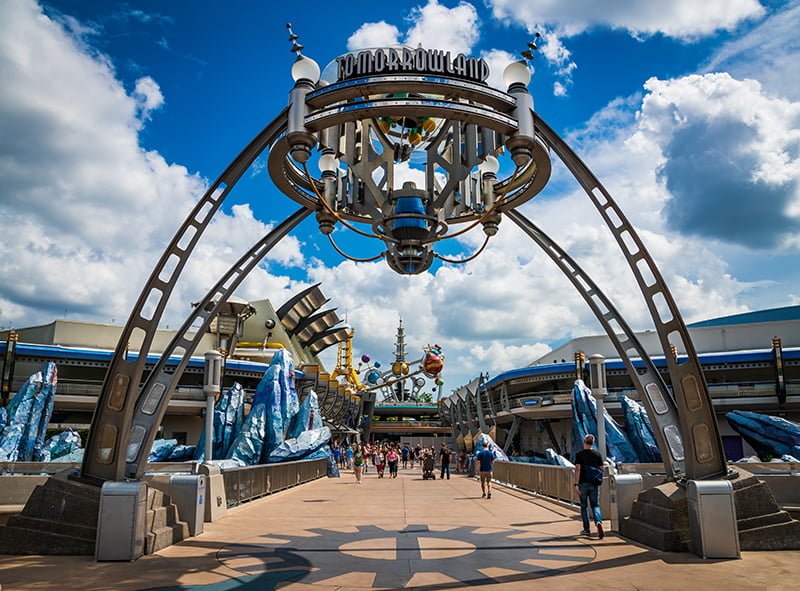 Entering Tomorrowland, the Incredibles decorations have been removed.

It’s nice to have the unblemished entrance back. This is one of my favorite visuals in Magic Kingdom, and I wouldn’t be surprised if it’s not around much longer. 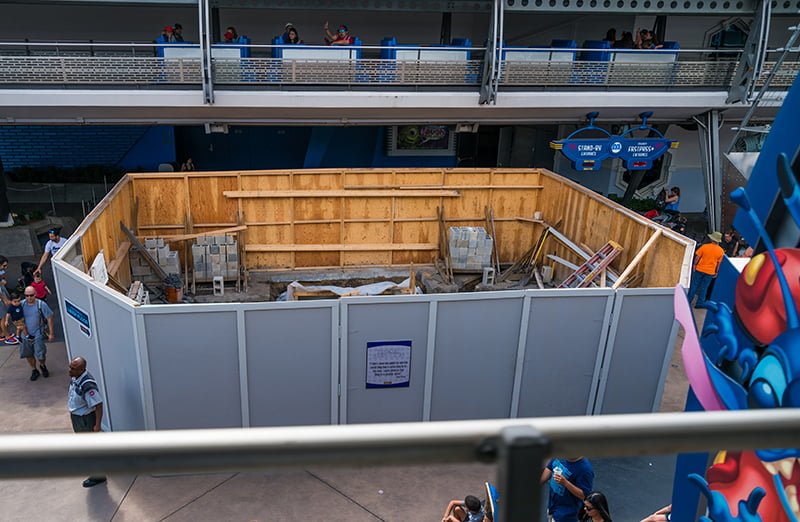 What we previously thought was some concrete work in front of Monsters Inc. Laugh Floor was actually the removal of the attraction’s marquee and an ornamental, evocative UFO type detail.

With Stitch’s Great Escape gone for good, it’s safe to assume the other side of this corridor will get the same treatment soon. On the one hand, these 2D marquees were tacky. On the other hand, the ornamental details from Tomorrowland ’94 that are also being removed suggest that era is over. 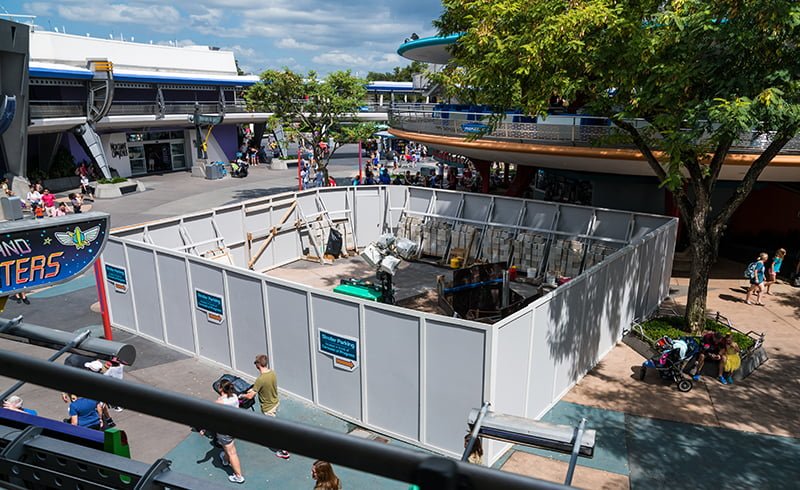 Over the course of the new couple of years, we’re guessing a lot of Tomorrowland ’94 artifice will be peeled back. Presumably, the goals are improving crowd flow (Tron and Space Mountain right next to one another are a recipe for heavy crowds) and also introducing a new aesthetic to the land. 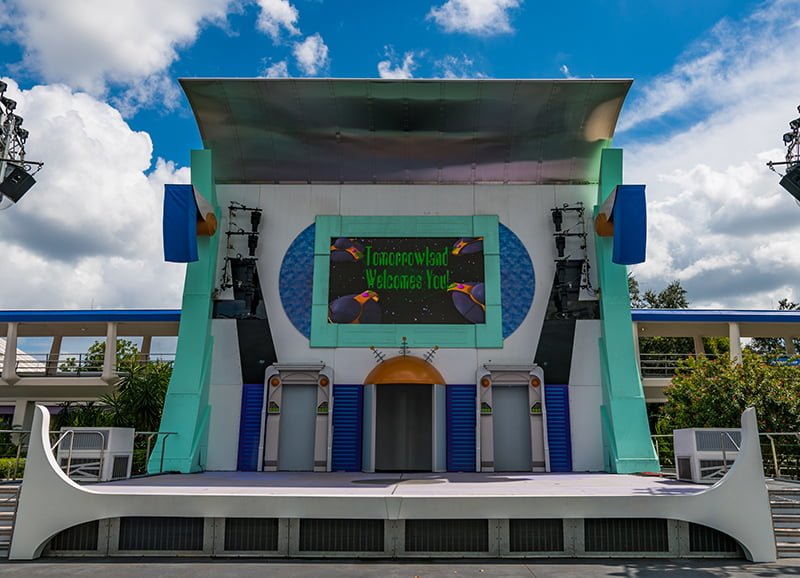 No dance party in Tomorrowland right now, which is a rarity.

Not that I’m complaining–we were able to enjoy Carousel of Progress in peace! 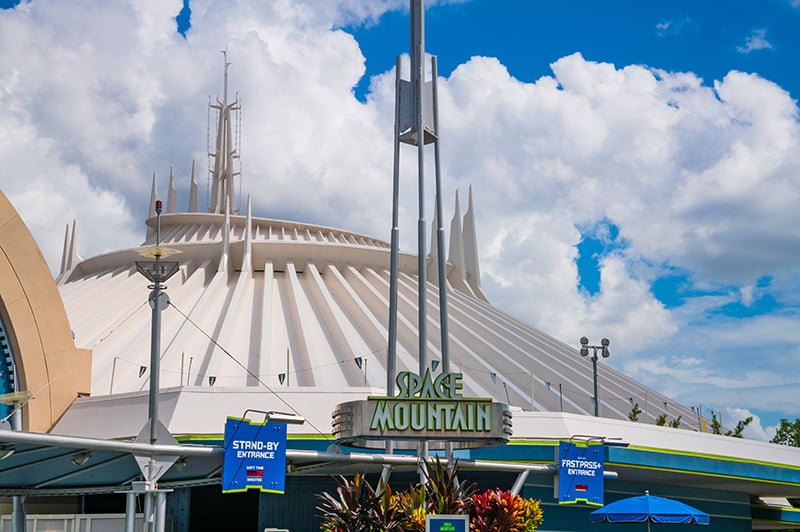 Space Mountain regularly had a midday wait of 20-30 minutes during the first half of our visit.

It was really a “tale of two trips” in terms of crowds. The first half was a continuation of the trends observed in our “All Quiet on the Crowds at Walt Disney World Front” post. The second half was absolutely bananas, exactly what you’d expect from the “new normal” of October crowds. 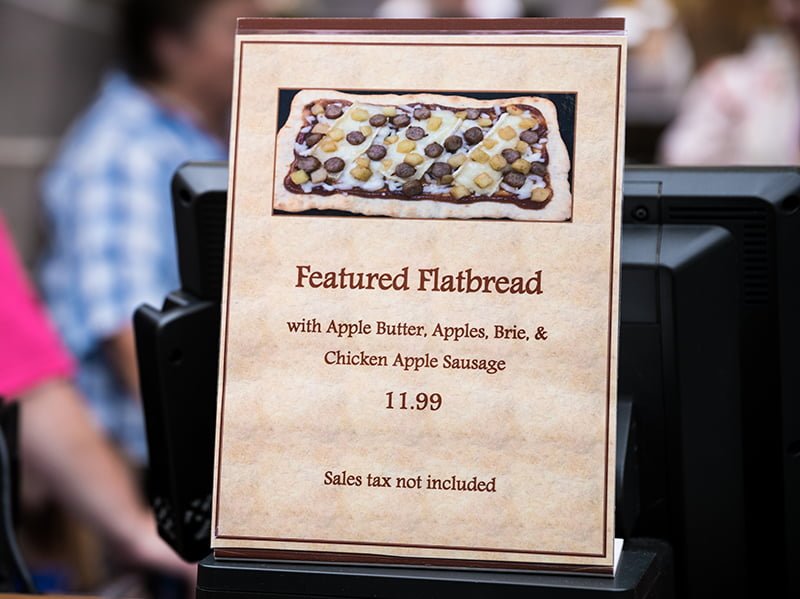 We debated whether to get this flatbread at Pinocchio Village Haus in Fantasyland for a good 5 minutes. The idea behind it actually sounds appealing to us, but it’s one of those things that is totally dependent upon execution.

After seeing a couple of guests carrying the “production model” of the flatbread, we decided to pass. Sorry, we don’t take our research that seriously. 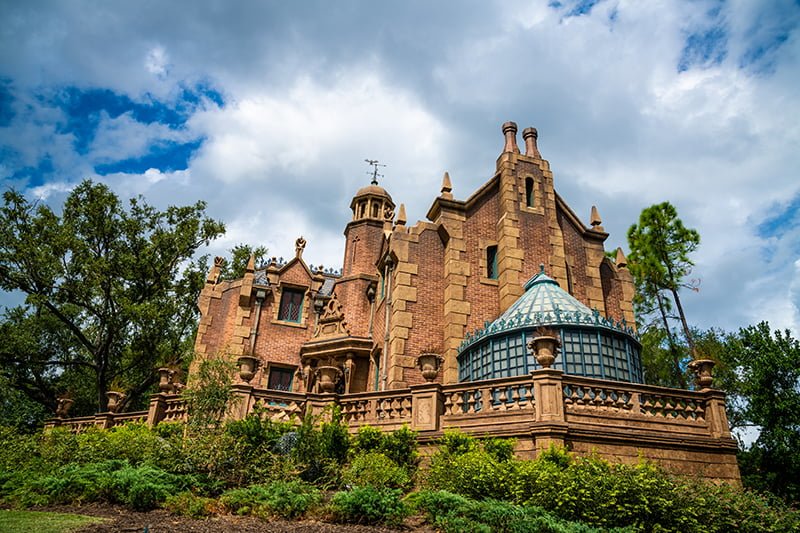 Some great news in Liberty Square…well, if you obsess over foliage like we do.

The trees directly in front of Haunted Mansion have been replaced with smaller trees, revealing the facade in all its foreboding glory!

Here’s what the trees looked like a year ago: 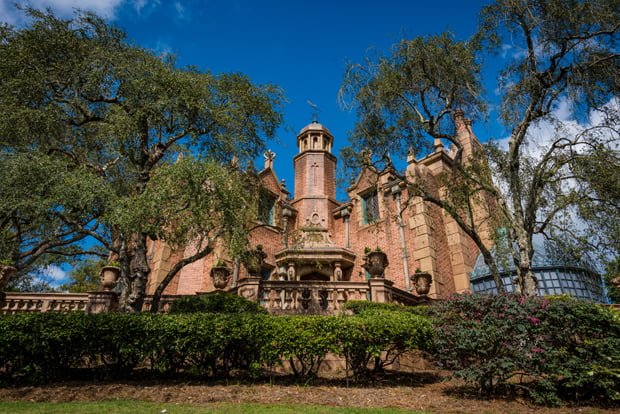 I could understand having trees conceal the facade if there’s later going to be a big reveal further into the queue…but there isn’t.

Between the (necessary) shade canopy in the queue and those trees, most guests never get an up-close view of Haunted Mansion’s facade. That’s unfortunate, because it’s an ornate and disquieting exterior. 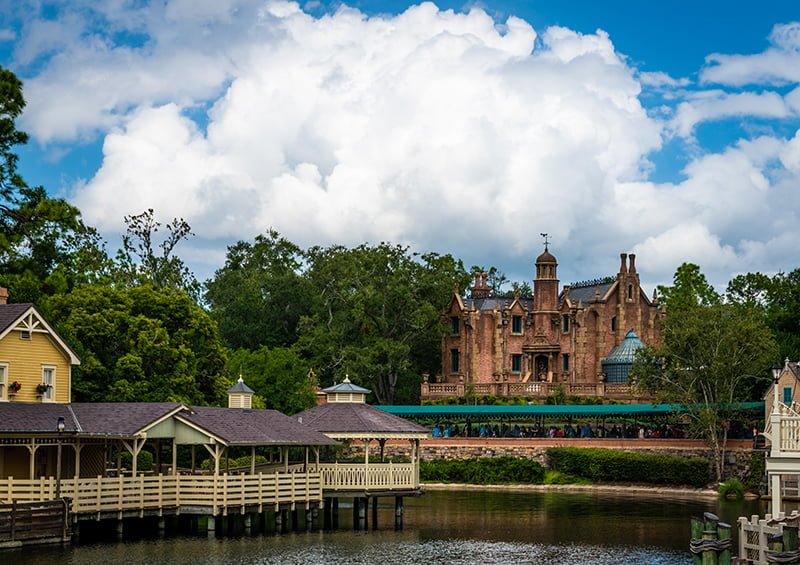 Above is the new view from a distance.

Below is that same view last month: 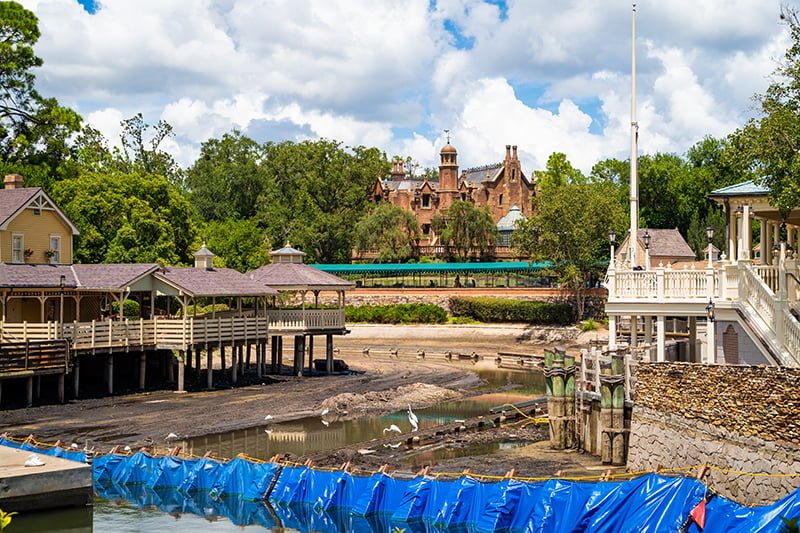 I definitely prefer the after, but from a distance, the trees obscure less of the facade.

The most noticeable difference between the two sets of photos is that the Rivers of America is no longer drained. The Riverboat is set to reopen December 22, 2018 after being closed most of this year. 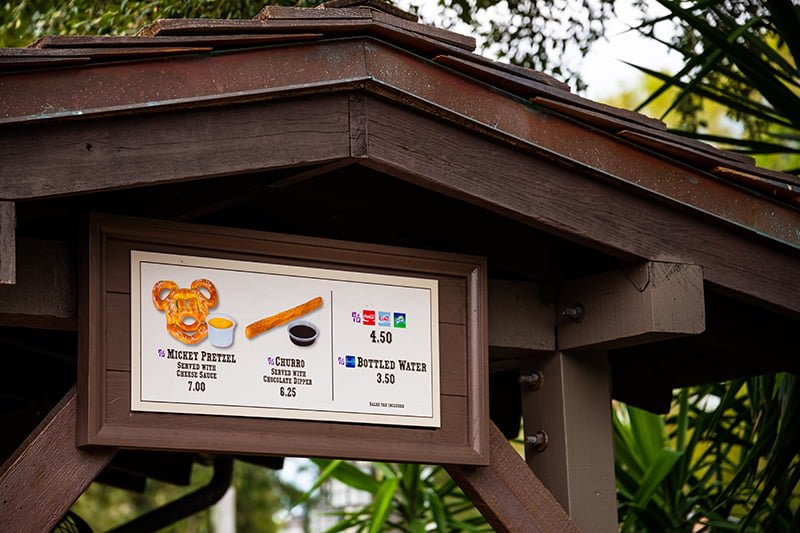 Churros had one of the biggest jumps. I’m not sure how anyone justifies $6.25 on a churro. I really wonder what percentage of people use Disney Dining Plan snack credits versus paying out of pocket for those. 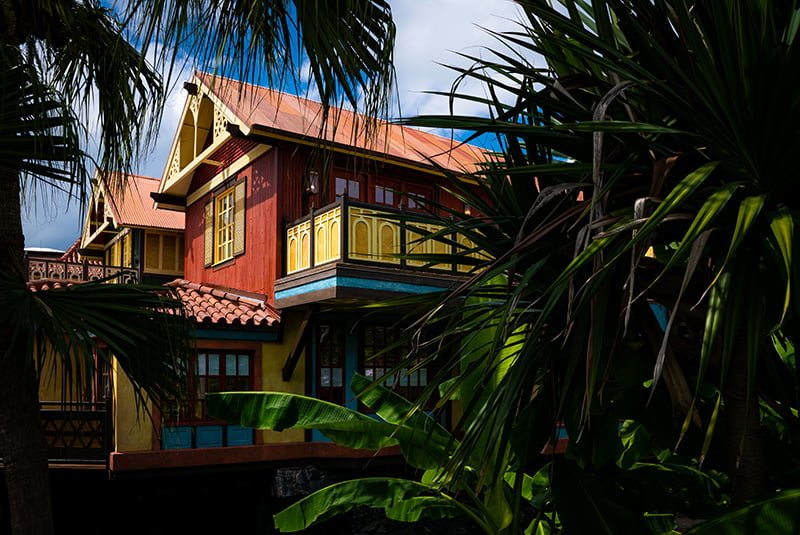 Speaking of having money to burn, if you do, why not consider joining Club 33 at Walt Disney World?!

All you need is $33,000 (cute) plus $15,000 per year, and you’ll get access to the 3 clubs currently open at Walt Disney World, along with Premier APs, instant FastPass+, and other benefits. 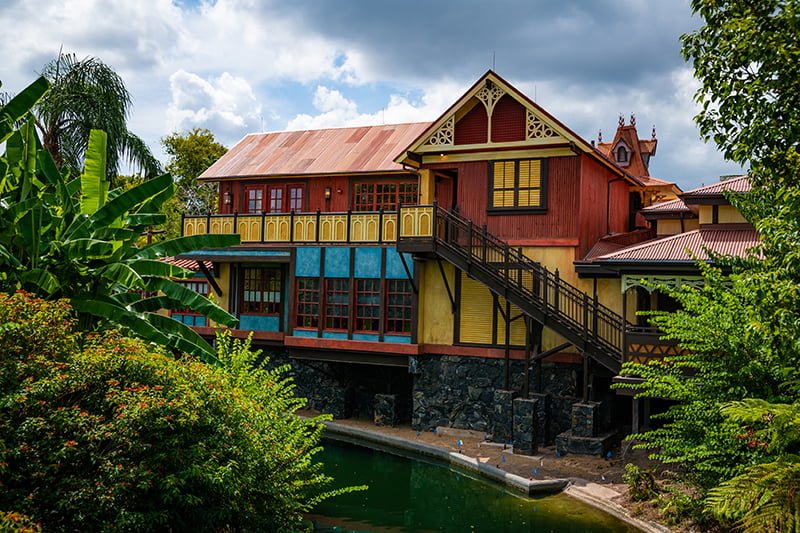 At least this Magic Kingdom Club 33 lounge at the entrance to Adventureland is subtle and fits with the theme of the area. The same can be said for all of the lounges open to date, which is a relief after the redesign of Club 33 at Disneyland botched parts of New Orleans Square.

This is the third Club 33 lounge to open at Walt Disney World, with Epcot (American Adventure) and Disney’s Hollywood Studios (Catwalk Bar–above the Brown Derby) both having opened months ago. Animal Kingdom is last up. 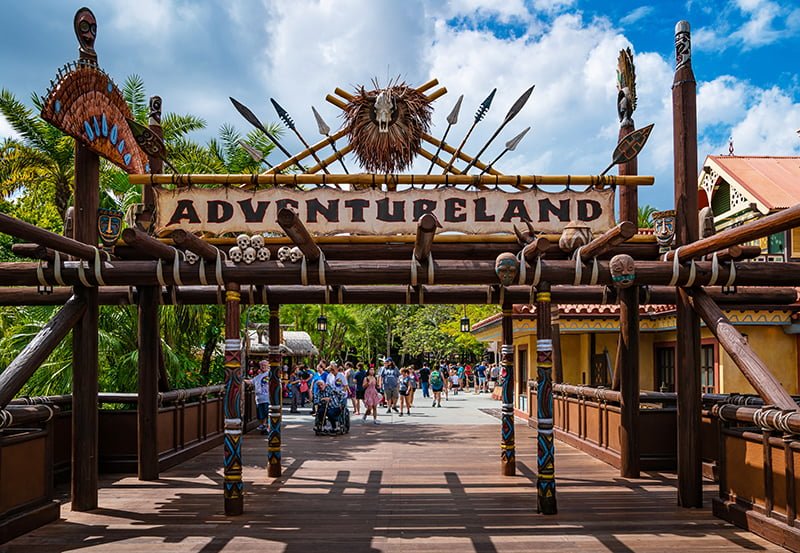 Work on the Adventureland Bridge is now finished, and is looking good. 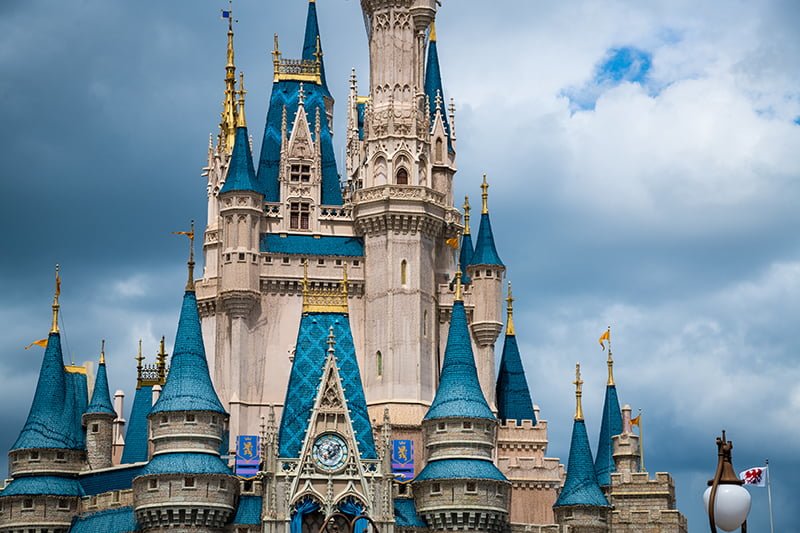 The Cinderella Castle Dream Lights are going up! Okay, so perhaps not great news for everyone, but we absolutely love Christmas season at Walt Disney World, and I’m ready for it–and cooler weather–to be here.

November and December are, without a doubt, our two favorite months of the year in the parks. There are pockets of lower crowds and weather that’s just as good, but none have the same atmosphere as the holiday season. We’ll see you at the start of the Christmas season for our next update!

Thoughts or insights about current construction projects in Magic Kingdom? Debating whether to spend your spare $33,000 on Club 33…or on 5,280 churros? Excited for Christmas season at Walt Disney World? Any questions we can help you answer? Hearing your feedback–even when you disagree with us–is both interesting to us and helpful to other readers, so please share your thoughts below in the comments!