This Flo’s V8 Cafe review features food photos and summarizes our opinion of this Cars Land restaurant at Disney California Adventure. Flo’s V8 Cafe has undergone a significant menu overhaul since it first opened, at which point we named it one of the best restaurants in all of Disneyland Resort.

Starting with the theme, Flo’s V8 Cafe is modeled after a real restaurant on Route 66, Midpoint Cafe in Midpoint, Texas. Before you snort in derision that the real restaurant is in Texas and this is a California theme park, it’s fair to say that this restaurant could be found anywhere along Route 66, including California.

More than anything, it looks like Flo’s V8 Cafe that caters to talking cars from a certain Pixar film, which is set in a fictional town an an area that’s most likely Arizona…which is also not California. Whatever. The cafe and the land work, and they work well.

Flo’s V8 Cafe is a mix of real-life 60s-era car culture and backstory from Cars having to do with the rise of racing in Radiator Springs. The neon will draw you toward the restaurant, where you’ll notice great details such as oil cans, gas pumps, cacti, and varying types of architecture depending upon what side of the restaurant you view. Once inside, the rest of the details will continue to mesmerize you.

The main lobby and line area has a large dome ceiling with color-changing lighting and a modern lighting fixture. This, against the checkered floor and the jukebox tunes of Cars Land give Flo’s V8 Cafe a 1960s soda-fountain feel. Different dining rooms have different themes, with part of the restaurant decorated in a “pit” style, another area decorated as a trophy room, and another area featuring awards, accolades, and posters from Flo’s career as a singer. 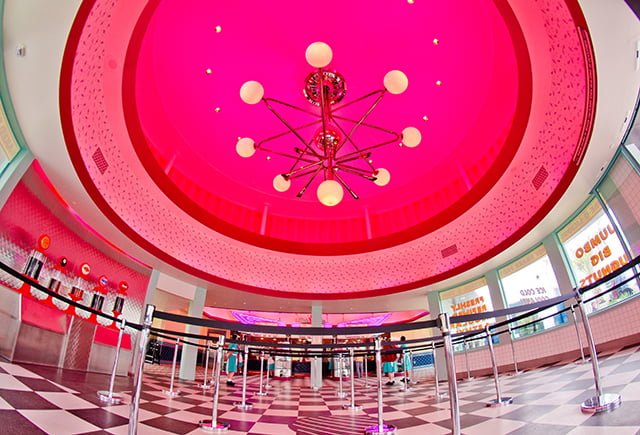 All of these details inside are really cool and worth some time exploring, but the absolute best place to eat is actually outside, behind the restaurant in an area that overlooks Ornament Valley (and Radiator Springs Racers).

Soaking up the ambiance in this seating area at night while enjoying a nice Racer 5 IPA (speaking of which, I commend Disney for going with a local microbrew from Bear Republic Brewery) might just be my favorite thing to do in all of Cars Land.

The ambiance inside is great, too. There, you’re transported to the bygone era of car culture, whereas outside, you feel the “natural” world of Radiator Springs.

In both cases, the atmosphere you’re experiencing is not one that will remind you of the cartoon world of Cars or of being in a theme park. In both cases, you’re truly transported away from Disneyland Resort and into totally different locations entirely. 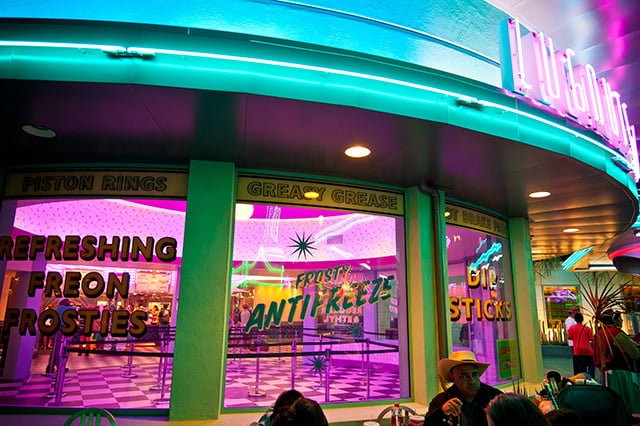 This is the greatest allure of Flo’s V8 Cafe, and it’s a testament to the Imagineers that they were able to convey a car theme that isn’t simply straight out of a scene in Cars.

Yes, the references to the film are there, but beyond the exterior design bearing a striking resemble to a locale in the movie, the restaurant does not seem cartoonish at all.

Of course, all of the ambiance in the world doesn’t make a whole lot of difference for a restaurant if the restaurant’s food is awful.

During our visit for the grand reopening of Disney California Adventure and in the couple of years that followed, we ate at Flo’s several times, and enjoyed the experience each and every time. Pretty much everyone we knew liked the menu and enjoyed the food. Then, the menu changed. And not for the better. 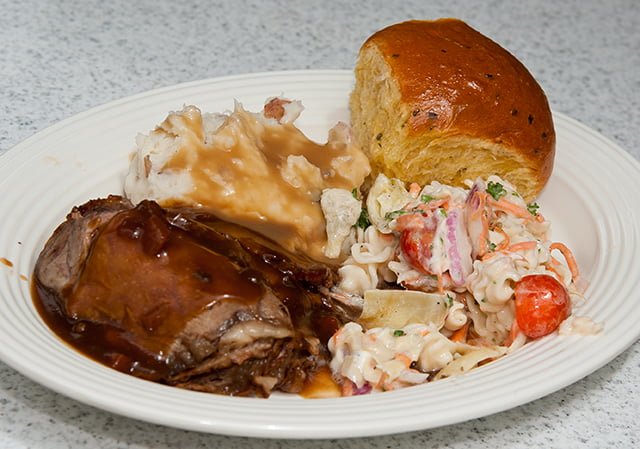 Here’s an example of something from the old menu: Pork Loin with Coca-Cola BBQ sauce. The sides (your choice of 2 hot sides) were hearty, the portion of meat was deceptively large, and the garlic chive roll was good. When Cars Land opened a few years ago, this was available for $11.50. Note that this is no longer on the menu, we just are showing it for the sake of comparison.

Now, the new menu. At first blush, it may seem like a lateral move. Ribs, chicken, and a couple decent-sounding sandwiches… 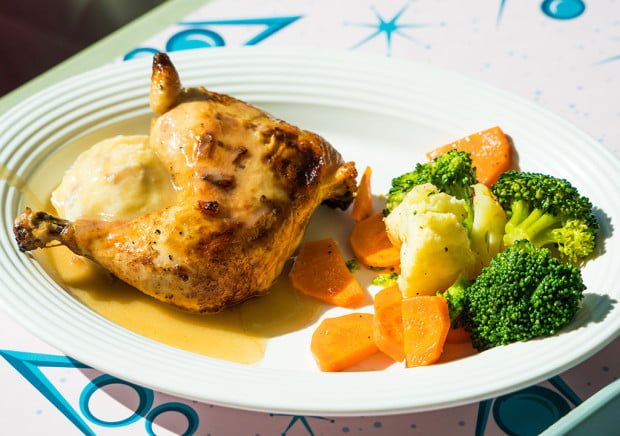 Then you see the portion sizes, all at higher prices. Here is the quarter chicken accompanied by a scarce amount of veggies and a spoonful of mashed potatoes.

For a couple dollars more, you can get a half-chicken with more on the side over at Cocina Cucamonga (Review). That’s definitely the better option. 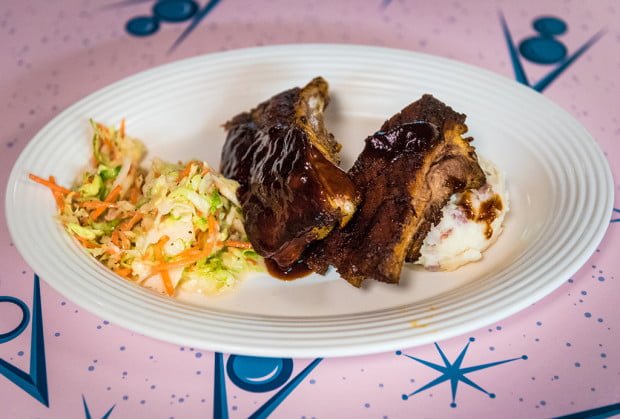 Likewise, the rib platter is about a quarter rack of ribs. They are delicious, but even someone with a modest appetite will leave hungry. 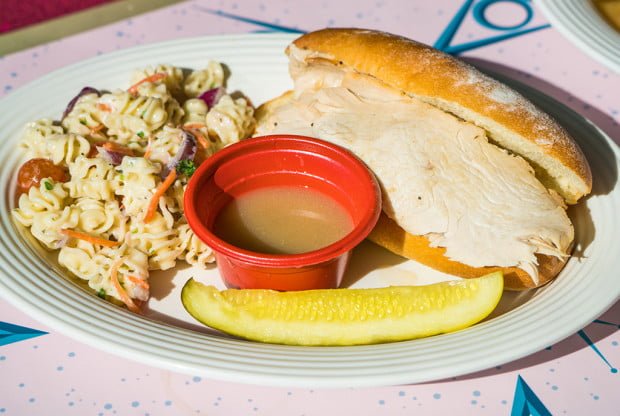 The turkey sandwich is a better option…but only because of the bread. Again, barely any meat here, and what is there is on the dry side (thankfully it’s a dip sandwich). 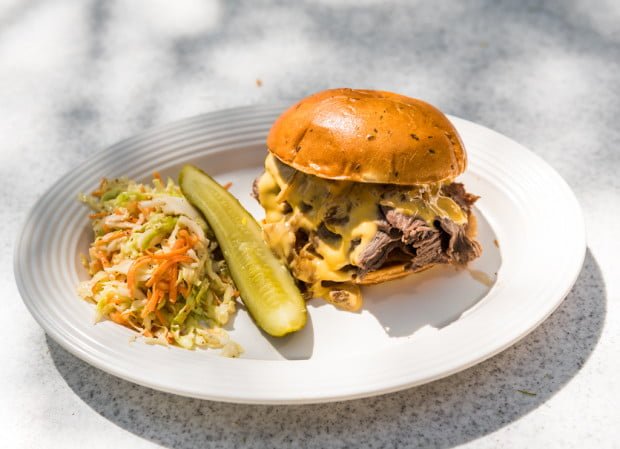 The best option terms of both value and taste is the roast beef & cheddar sandwich, which has a fair amount of meat that is juicy and tender on a soft chive bun. Even with this, though, I was hungry again like 2 hours after my meal. 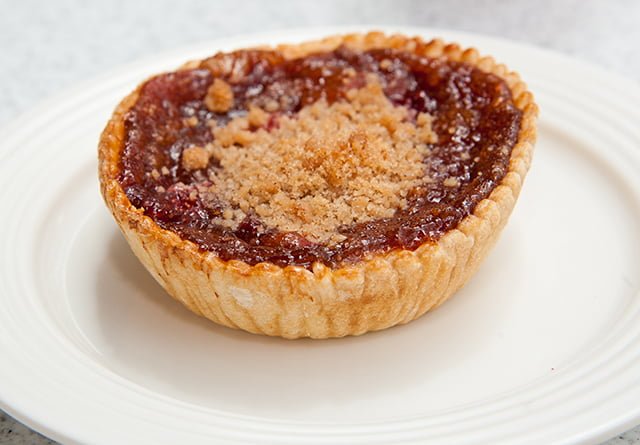 On a more positive note, the desserts are still just as delicious as they always have been here. 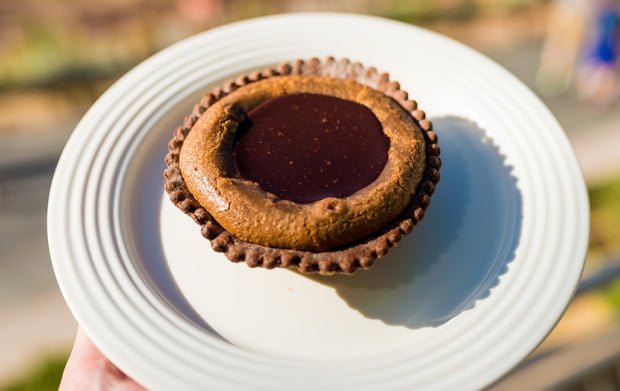 The chocolate mud pie is rich and decadent, and well worth ordering. I wouldn’t say it’s an addictive pie or something you’ll crave, but it’s very good. One of the top 10 desserts at Disney California Adventure. 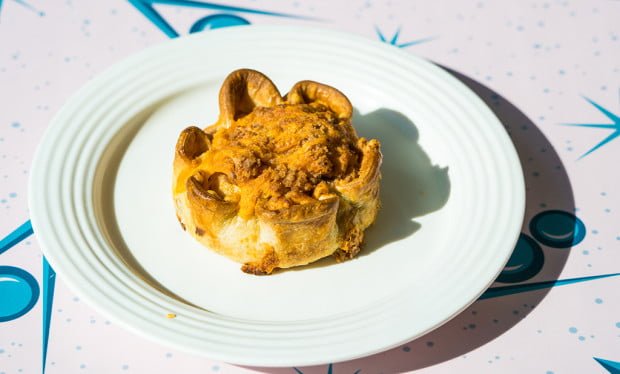 Higher up that same top 10 list is the cheddar apple pie. These flavors go together like bacon and maple icing (which is to say shockingly well) and this is a unique, must-do dessert. 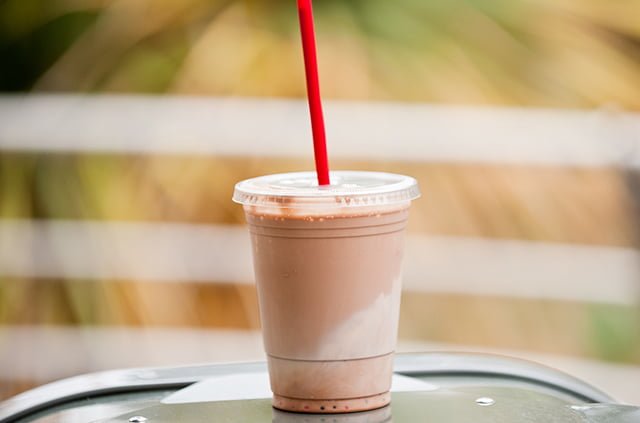 Although not as unique, we also like the chocolate shake with “road gravel.” As best I can tell, the road gravel isn’t actual chunks of rocks, but little balls of chocolate. It added a nice texture to our chocolate shake, which was very good.

Overall, what’s happened to Flo’s is a real disappointment. When it originally opened, it was our favorite restaurant in Disney California Adventure. We wrote then that “prices at Flo’s are surprisingly reasonable for what you get. Although technically a counter service restaurant, it’s at the upper end of the spectrum” and praised its great ambiance. Well, fortunately that ambiance is still just as good as ever, but it now seems to be resting on the laurels of ambiance and its location in the busiest area of Disney California Adventure. The menu is a shadow of its former self, and you are likely to leave here hungry if you don’t order desserts (fortunately, they’re good). Our recommendation is still to dine here–but by grabbing food from Pacific Wharf, and walking over the the “back porch” and enjoying the ambiance while eating a more substantial meal.

If you’ve been to Flo’s V8 Cafe, which entrees and desserts do you like best? Have you noticed a decline in the food here since it opened? If you haven’t been, does this make you want to visit Cars Land even more? Share your thoughts in the comments!