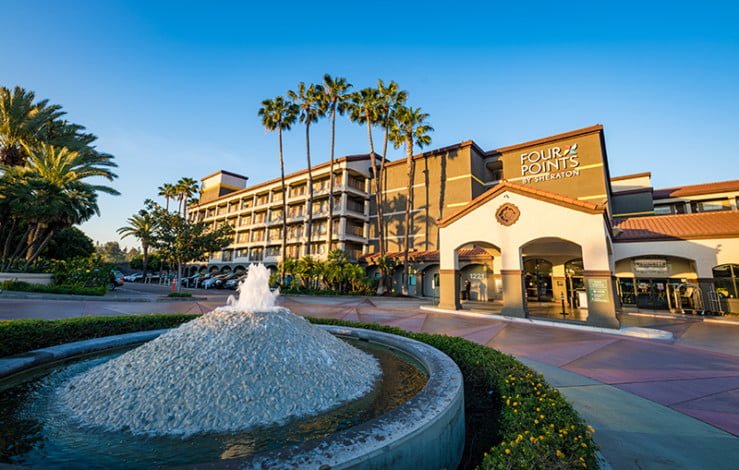 Four Points by Sheraton Anaheim is a Disneyland Good Neighbor Hotel located about 12 minutes from Disney California Adventure and Disneyland, just across the I-5 freeway. The hotel aims for trendy and chic, and succeeds somewhat. This review features photos of the hotel, plus thoughts about our experience of staying here.

This hotel used to be Hotel Menage, which, aside from a rather unfortunate name, was a fairly solid hotel. It had some nice amenities including a pool and hip bar, but the rooms were underwhelming. In our Disneyland Hotels Reviews & Rankings post, it ranked in the top 25. Better than average, but nothing special.

We were fairly optimistic when it was announced that the hotel would be rebranded as a Sheraton, as that meant maybe those rooms would be addressed and the hotel would improve a bit. It turns out that our expectations were too low, as the hotel has transformed to the point that we’ve gone back and are re-reviewing it, rather than just updating our old review.

Before we get to all of the changes and improvements mad in transforming this into the Four Points by Sheraton Anaheim, let’s start the review with some basics. One of the most important considerations for our readers when evaluating hotels near Disneyland is location. With the Four Points by Sheraton Anaheim being only a 12 minute walk from Disney California Adventure and Disneyland, the location is pretty solid on paper.

It’s essentially just a bit further down the street from the HoJo Anaheim, and on the Disneyland side of Harbor Boulevard. Both of these hotels are adjacent to the I-5 freeway. For those unfamiliar with the 5, it’s a major highway running through Orange County, which right away should raise concerns about noise. I’ve never had any trouble sleeping nor have I noticed the sounds of the freeway at either of these hotels, but light sleepers might want to request an interior room, away from the highway. 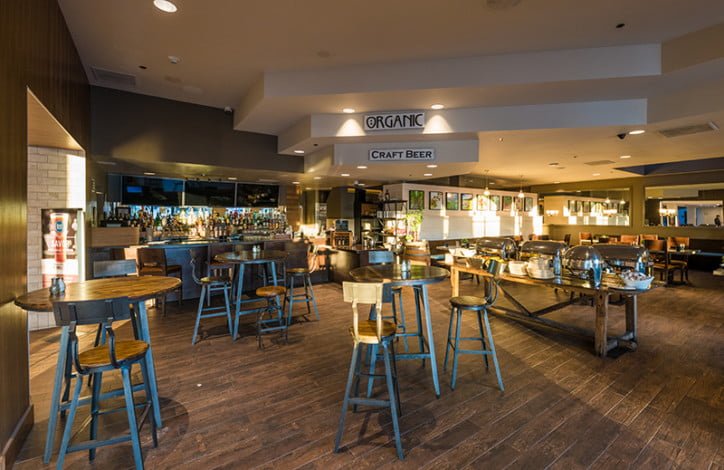 The bigger issue is that when walking to Disneyland, you have to cross the I-5 on and off ramps. There are pedestrian traffic signals here, but we’ve heard from readers in the past that this is a big downside when traveling with kids.

We stayed at the Four Points by Sheraton Anaheim and Howard Johnson Anaheim on consecutive nights, and definitely felt that the walk was more pleasant from the HoJo. From our perspective, the proximity to I-5 is about the only weakness of the Four Points. 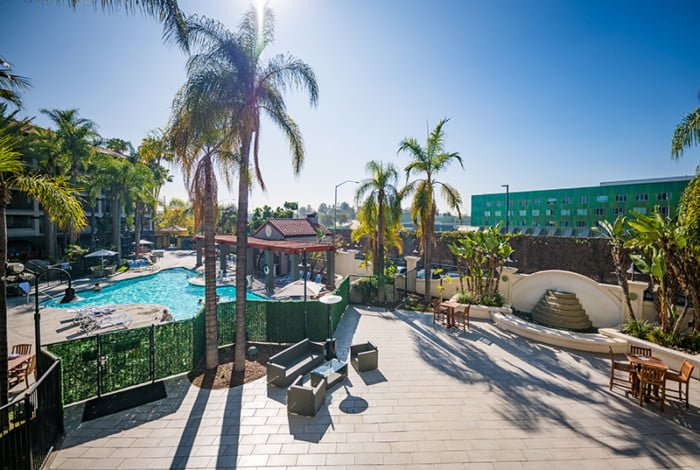 I’d go as far as to describe these spots as posh, and they are certainly nice places to relax and unwind. The atmosphere all around the Four Points lobby is really fun and laid back. All of this makes the Four Points by Sheraton Anaheim an ideal hotel for two honeymooners or childless twenty-somethings might go for an adults-only Disneyland trip enjoyed at a relaxed place. 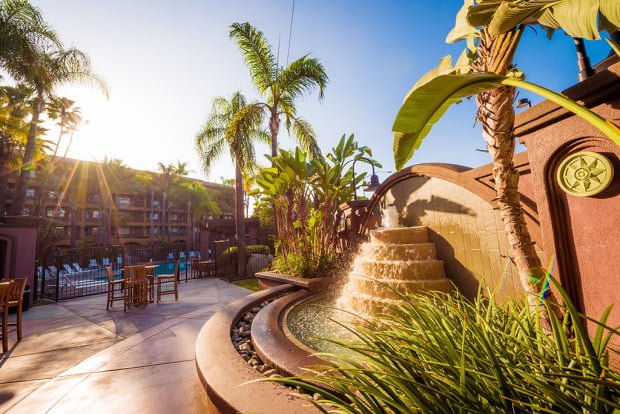 Think of this as the Trader Sam’s and pool area at Disneyland Hotel, except at a much lower price point and not as geared towards families. This isn’t to say the Four Points is not family friendly, but it doesn’t overtly cater to families like the Disneyland Hotel.

Like most of the mid-grade and above chained-brand hotels in Anaheim, the Four Points doesn’t serve a complimentary continental breakfast. We didn’t try the breakfast buffet here, but it seemed moderately priced. 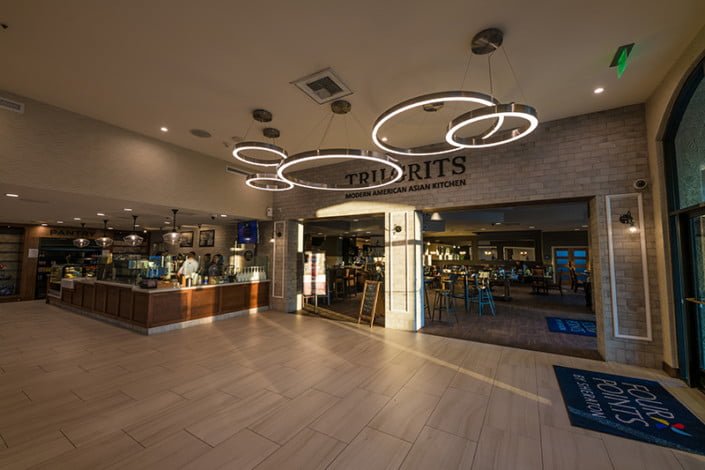 The biggest problem with Hotel Menage was that this chic and trendy vibe fell apart once you left the lobby and pool areas. Outside of those, it was basically any other mid-tier motel in Anaheim. Not the case with Four Points by Sheraton Anaheim.

In fact, I suspect the solid foundation of the restaurant, lobby, and large pool area made it attractive to Sheraton. There were pretty significant pieces to the puzzle already in place (particularly the pool, which is a notoriously weak point at Anaheim hotels) and improving the guest rooms and sprucing up other common areas would requirement a significant investment, but not a structural re-design. 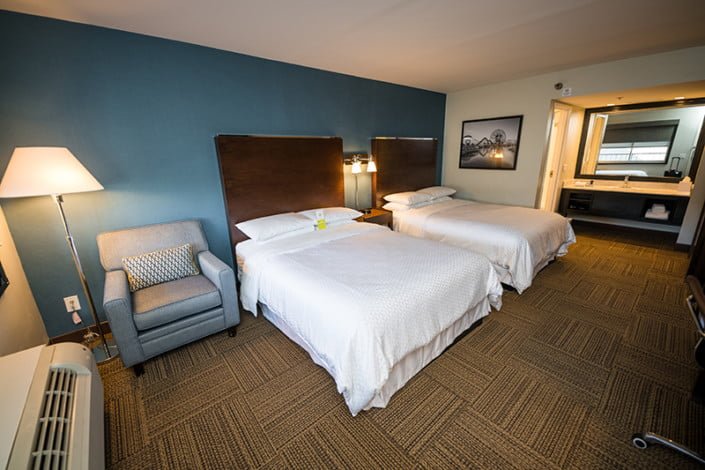 And, that’s exactly what re-modeling this into the Four Points by Sheraton Anaheim delivered. Gone is the worse-for-wear furniture, tired room design, and blah color scheme. In its place, there is a modern design sensibility, new furniture, and contemporary feel.

Don’t get me wrong, the Four Points is not the pinnacle of hotel rooms. It is, however, in keeping with the rest of the hotel, and a classy and clean style that its intended audience will appreciate. They even used art from Disneyland Resort instead of Florida! (You laugh, but you don’t realize how common that is at Anaheim hotels…have their designers never walked down the street?!) 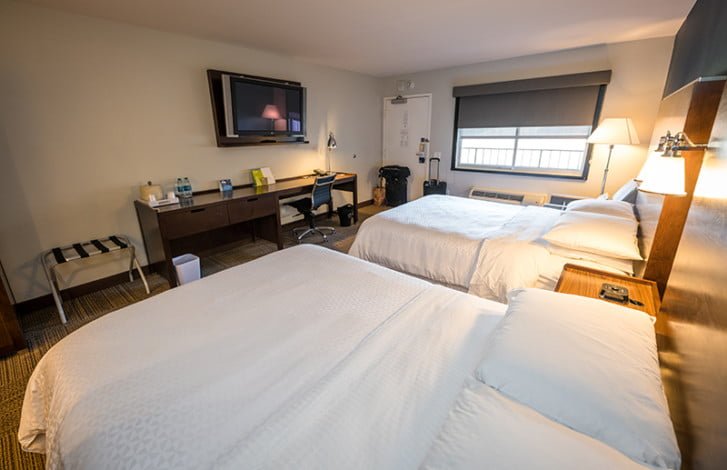 The sheets and bedding are downright luxurious, and these are some of the most comfortable beds in all of Anaheim. That alone sells us on the room, with everything else being icing. The rest of the design flourishes make it feel slightly upscale, even if it is just a glorified motel on the outside.

The biggest downside to the rooms at Four Points by Sheraton Anaheim is that some of them face I-5 interstate. We checked into our room early and the front desk proactively noted that they had put us in a room away from the highway. You might want to politely request this upon check-in. We had zero issues with any noise during our stay, so I’m not sure whether the highway would be an issue with some rooms, but it’s better safe than sorry. 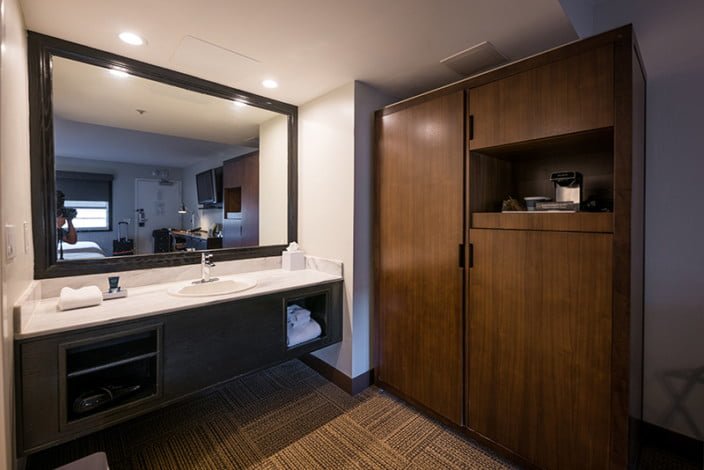 In addition to the aforementioned restaurants, pool, and bars, Four Points by Sheraton Anaheim has a fairly nice fitness center, business center, conference & event space, and even allows pets for an extra fee of $25/night.

Booked directly, Four Points by Sheraton Anaheim costs around $125-175/night before tax, which actually isn’t bad for what it is. In fact, compared to the Anaheim Convention Center hotels (it’s most logical counterpart), the Four Points is a pretty good value. Parking is another $16/night on top of that. (Parking fees are waived if you book through Get Away Today–better yet, they do the fourth night free at the Four Points!)

You can also earn or redeem Marriott Bonvoy points at the Four Points, which is obviously a big deal if you’re a member of that program. As Marriott Bonvoy guests, we were also given a late checkout of 4 p.m., which was huge for us. (Normally, we’re lucky to get a noon checkout at Anaheim hotels.)

Overall, we are big fans of Four Points by Sheraton Anaheim. It fills a nice niche at Disneyland that is under-served (aside from the Convention Center hotels) and we think that other adult travelers are going to appreciate its atmosphere, amenities, and room style. It’s definitely not a hotel that will appeal to everyone, but if these amenities appeal to you and you’re fine with the location next to I-5 (both it terms of crossing it to get to the parks and potentially have a room adjacent to it), we’d highly recommend the Four Points by Sheraton Anaheim.

Have you stayed at the Four Points by Sheraton Anaheim? Did you enjoy your stay? Considering this hotel? Do you prefer staying off-site or on-site at Disneyland? Any questions? Hearing feedback about your experiences is both interesting to us and helpful to other readers, so please share your thoughts below in the comments!