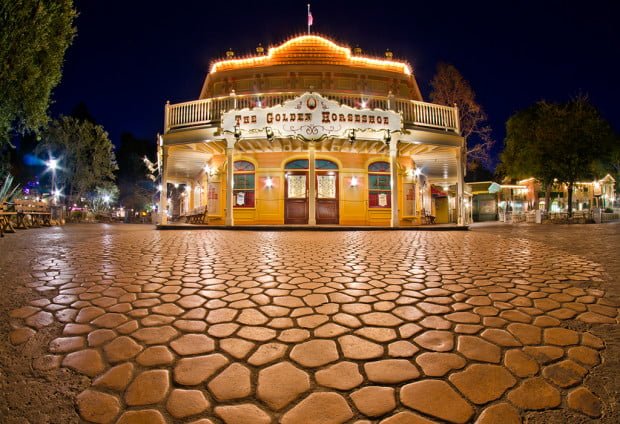 The Golden Horseshoe and Stage Door Cafe are counter service restaurants at Disneyland serving ice cream and various fried foods. This review features photos of the food and ice cream, history, and general thoughts on the locations. As for why these spots are lumped together in one review: Golden Horseshoe is the main restaurant here with meals served inside accompanied by performances, while Stage Door Cafe serves virtually the same menu from the same kitchen outside via a grab and go window. By any reasonable account, they are the same thing.

Disneyland’s Golden Horseshoe Revue went on to become the longest running stage production in show business history, as listed in the Guinness Book of World Records. Other acts have come and gone over the years, most recently being the hilarious Billy Hill and the Hillbillies, who have since been retired by Disneyland and now perform down the street at Knott’s Berry Farm as Krazy Kirk and the Hillbillies. Currently, Laughing Stock performs here.

Being huge Billy Hill and the Hillbillies fans, we have eaten here countless times. Unfortunately, it’s arguably the worst restaurant at Disneyland Resort. Why is it so bad despite all that history? Let’s take a look… 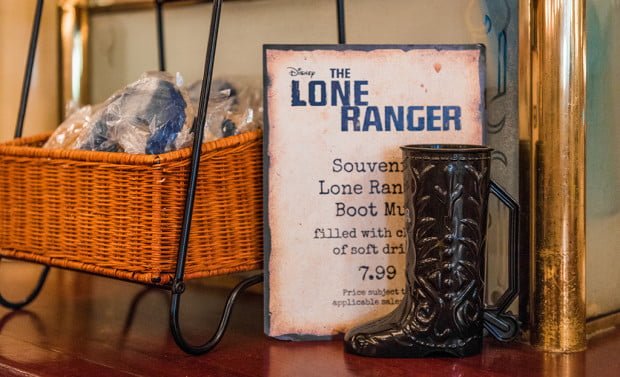 This Disney The Lone Ranger Souvenir Mug encapsulates all that is wrong with Golden Horseshoe and Stage Door Cafe in a single photo that was captured last week. As you may know, this movie was a colossal flop. Two years ago. That’s right, these restaurants are still selling a mug promoting a movie that flopped two years ago. Not only that, but the mug is overpriced, and cheaply mass-produced. 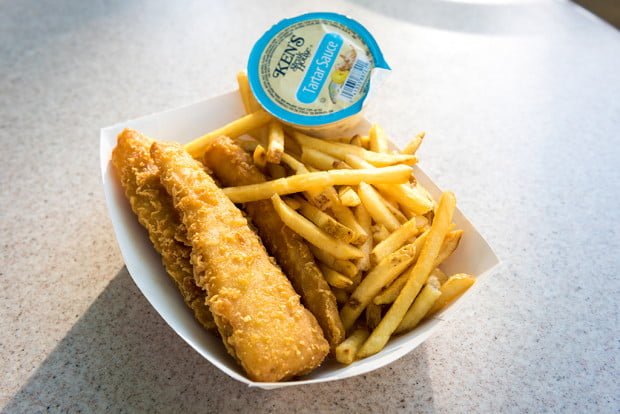 Which brings us to the food. These restaurants have two main menu items: fish & chips and chicken nuggets. (Each restaurant has a couple of ancillary options: Stage Door Cafe has corn dogs which look similar to those at the world-famous Little Red Wagon; Golden Horseshoe has chili in bread bowls, which I wouldn’t risk trying…but I suppose it could be good, against all odds?) 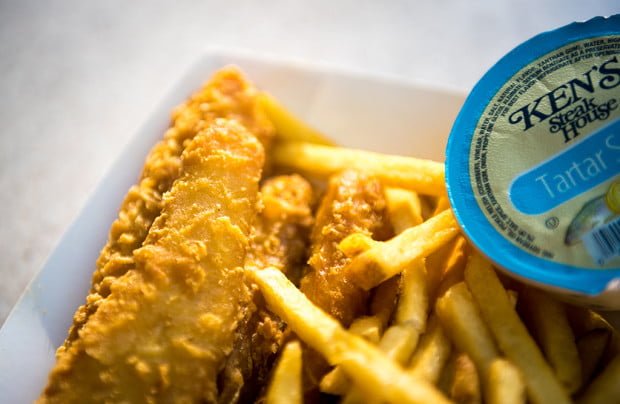 Both main options are equally bad. The fish & chips is especially egregious. I’ve literally had better fish from Great Value (that’s the Wal-Mart brand) freezer section bagged fish. I’ve (sadly) had the fish & chips here more than once, and it’s consistently awful, so I know my experience here isn’t a fluke. I’m guessing they have a nutritional value somewhere between cardboard and dog food. Feeding this to your kids might border on child abuse, no matter how much they might claim to like this over-processed garbage. 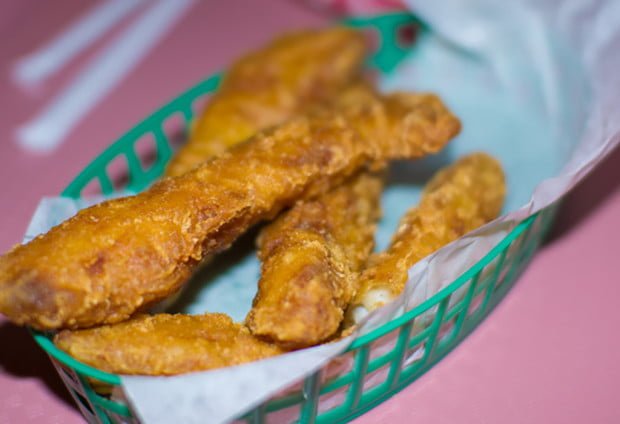 This is the fish that used to be served a couple of years ago at the two restaurants. It was marginally better, but still nothing on par with the likes of Yorkshire County Fish Shop at Epcot.

The chicken nuggets are slightly better, but still taste like they came from a cheap bag in the frozen food aisle. 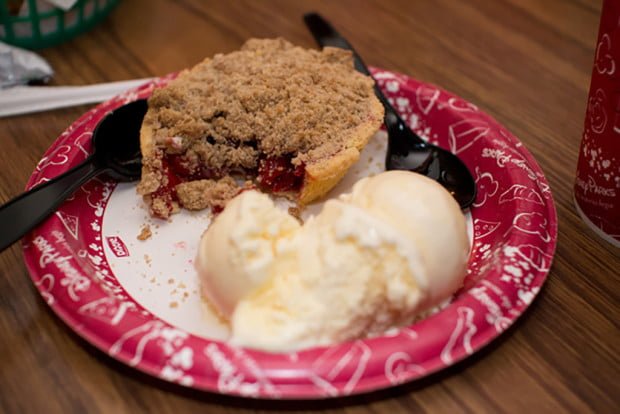 Then there’s the ice cream. We have eaten way too much ice cream at Golden Horseshoe over the years. Every time there is a seasonal or special event menu, Golden Horseshoe has something that sounds intriguing. The description is always much better than the actual product. 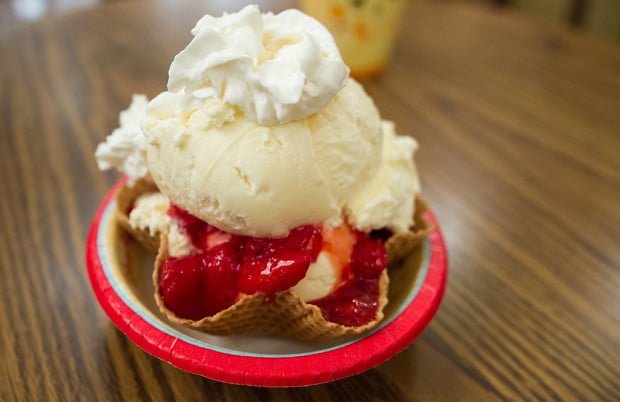 The biggest problem aside from the execution of the concepts are the ice cream itself and the service. Any time Golden Horseshoe is remotely busy, the ordering and pick-up counters become chaotic. You might be able to order right away, it might take 15 minutes. You might get your ice cream right away, they might serve 10 people before you who ordered after you. It’s anyone’s guess what might happen with the Golden Horseshoe Ice Cream Lottery. 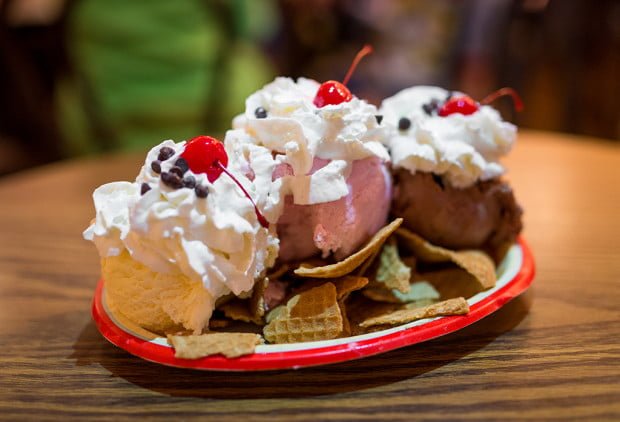 As for the ice cream itself, at least 50% of the time, we get ice cream that tastes like it came from the value bin and is varying degrees of freezer burnt. Also, portion size is highly inconsistent. For example, the ice cream “nachos” (yes, that’s what they were called) pictured above were a huge serving for the price (unfortunately, they were freezer burnt so we ate about half of what’s there). Other times, the portion seemed about half the size of what it should be. 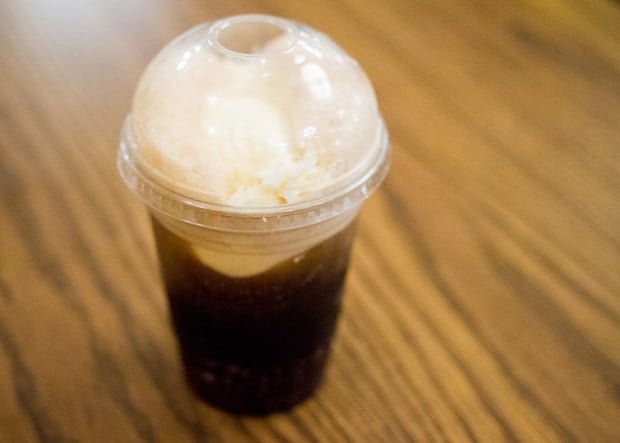 The one thing I’ve had here that’s consistently been good is the ice cream float. I don’t know if the root beer masks the freezer burnt flavor of the ice cream or what, but these have always been decent. So if you want to go in to watch Laughing Stock, grab one of these, I guess. Or just watch the show without ordering anything. 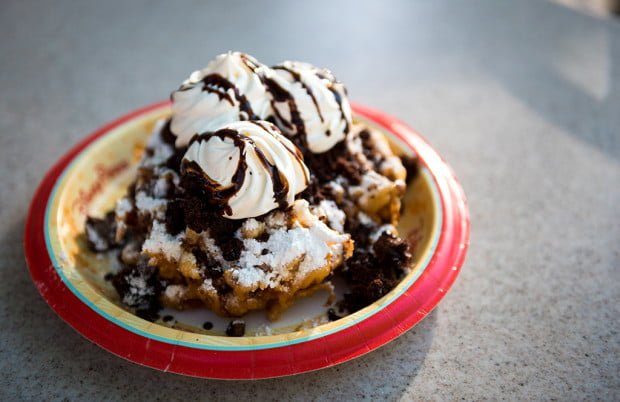 Then there are the funnel cakes outside at Stage Door Cafe. It’s as if the powers that be mandated that these be as bad as the ice cream inside. 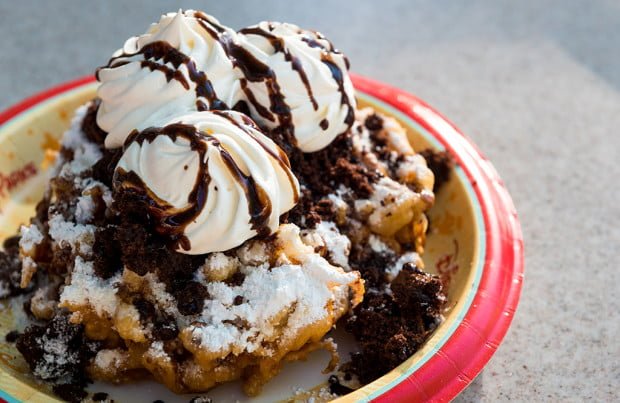 This is the chocolate brownie funnel cake. The funnel cake itself was so hard I’m shocked it didn’t chip my teeth, and while the brownie was slightly redeeming by itself, it didn’t come together well as a dessert. I do not waste food–especially dessert–but I only ate half of this. That’s how bad it was. 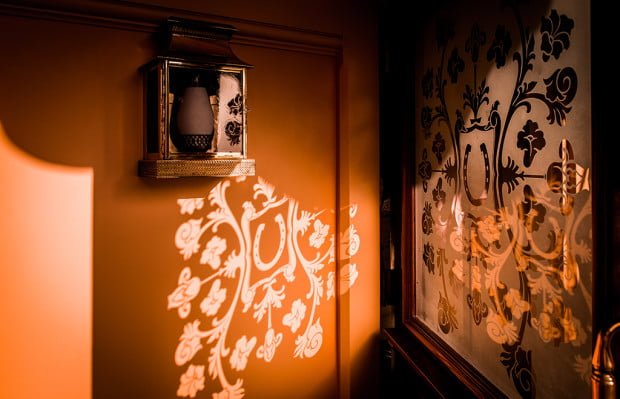 Overall, having eaten at every counter service at Disneyland Resort, I would peg Golden Horseshoe and Stage Door Cafe as far and away the worst options in terms of food. Yes, even worse than Tomorrowland Terrace. Don’t give in to the temptation to eat here just because your “kids will like” the stuff on the menu. Taking your kids here is the equivalent of giving them a box on Christmas morning to play with–but not the toy that should come inside–because you know that’s “good enough.”

If you look at Yelp and other sites, you might see scores inconsistent with my review, but dig a little deeper and you’ll mostly see positive reviews highlighting Billy Hill and the Hillbillies (who again, are gone), not the food. I know some people who like Golden Horseshoe, but I think that’s mostly from the perspective of entertainment. Laughing Stock is a decent show, and I wouldn’t discourage anyone from seeing it, but do not be tempted to order any food to “enjoy” during the show. Likewise, don’t think these are good places to go for a cool treat, no matter how good that cool new menu item looks. (And if you see me get excited about the next new concoction they have here, remind me of how bad the last ones have been–I sometimes have a short memory.) Golden Horseshoe is a beautiful location and a great place to go to escape the crowds, but you don’t need to order food to do that. Golden Horseshoe, with all its history, beautiful location, and live entertainment (the basis for all of the points it scores in this review), deserves much better than what’s currently served here.

As for figuring out the rest of your Disneyland trip, including how to save money on Disneyland tickets, our Disney packing tips, whether you should stay off-site or on-site in a Disney hotel, where to dine at Disneyland & Disney California Adventure, and a number of other things, check out our comprehensiveDisneyland Trip Planning Guide!

What do you think of The Golden Horseshoe and/or Stage Door Cafe? Am I being too hard on them? Do your “kids love them?” (Do you dislike your kids?) 😉 Share your thoughts in the comments!