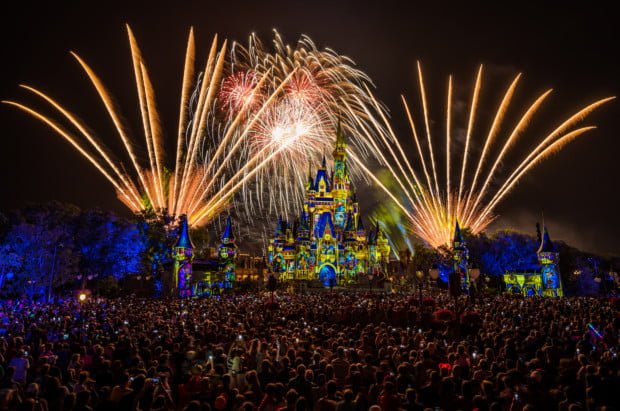 If you read my Wishes – A Magical Gathering of Disney Dreams Tribute, you know it was bittersweet for us to see Wishes go. While it was not a fireworks show of which we were particularly fond, over time nostalgia had wormed its way into our hearts, giving us a sense of attachment to that show. We weren’t alone in this–for many Walt Disney World fans, Wishes was the only normal Magic Kingdom fireworks show they had ever known.

Initially, I was cautiously optimistic about Happily Ever After. Disney’s initial announcement sounded promising; it seemed a lot of effort was being put into the show. Then we saw Disney Illuminations in Disneyland Paris. I shared my thoughts on that fireworks show in our recent trip recap, but most of you probably didn’t read that. Suffice to say, Disney Illuminations felt like a poorly-edited commercial for hot new films, completely disjointed and lacking heart. It worried me that Happily Ever After would have similar issues, or perhaps an insufficient amount of pyro for a Magic Kingdom fireworks show…

Thankfully, both concerns were completely unfounded. Happily Ever After is the best regular fireworks show to ever grace the skies above Magic Kingdom (there are only 2 others, so not exactly a huge accomplishment) and conceivably Magic Kingdom’s best fireworks show ever, period. The latter is a much more significant accomplishment considering some of the excellent seasonal shows.

Ostensibly, Happily Ever After is the same type of fireworks show as Disney Illuminations. Both feature projections and other effects, and are heavy in the montage clips. Yet, there’s a night and day difference. Happily Ever After takes the aspects of Disney Illuminations that work well, avoids the ‘fireworks show as a commercial’ pitfall, adds superior projections and a ton more pyro. 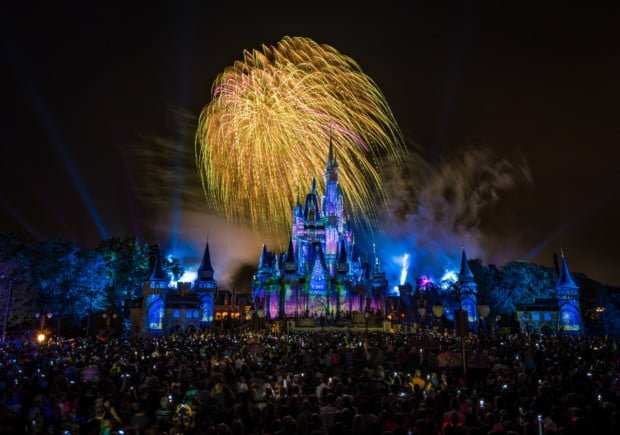 Then there’s the music. It’s really good. The theme song (which was actually first used for Hong Kong Disneyland’s 10th Anniversary, but whatever) has an addictive sound to it, and the arrangement of music and orchestral score in the show work really well. 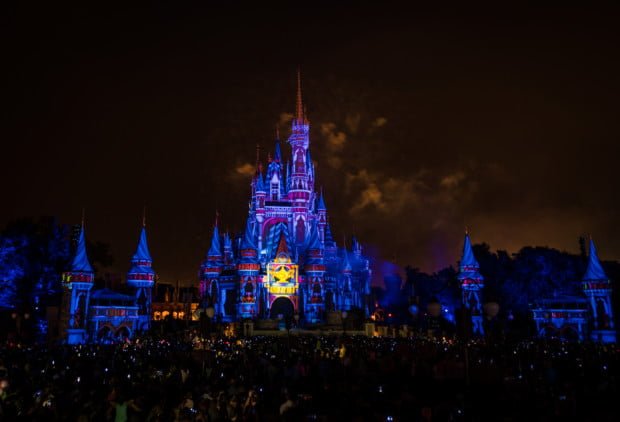 Next is the projections. The very existence of projections in a fireworks show seems controversial for some Disney fans. “Now you can only watch from in front of Cinderella Castle.” “Now the show isn’t as good for shorter people or kids.”

My counterpoint to these complaints is that if the music and pyro hit the mark–and I believe both do–how is it conceivably a ‘negative’ that Walt Disney World has chosen to add projections? They are icing on the cake.

To me, opposing projections without more of a basis for doing so seems like stubbornly opposing change. Yes, Happily Ever After is significantly better viewed head-on from Main Street USA. Speaking of which, we’ve updated our Best Magic Kingdom Fireworks Viewing Locations post with a new map, and thoughts on how this show differs from Wishes in terms of views.

With that said, Happily Ever After is better from Main Street and close up because that view presents something that was not in Wishes from any perspective. Happily Ever After is not suddenly worse than Wishes when viewed from the TTC, beach of the Polynesian, California Grill, or even New Fantasyland.

The pyro is the same and there are new spotlights that look exceptional from outside the park. We watched from the TTC, and were impressed by the visuals. (Albeit not the bugs…which are not a ‘feature’ unique to Happily Ever After, though.) 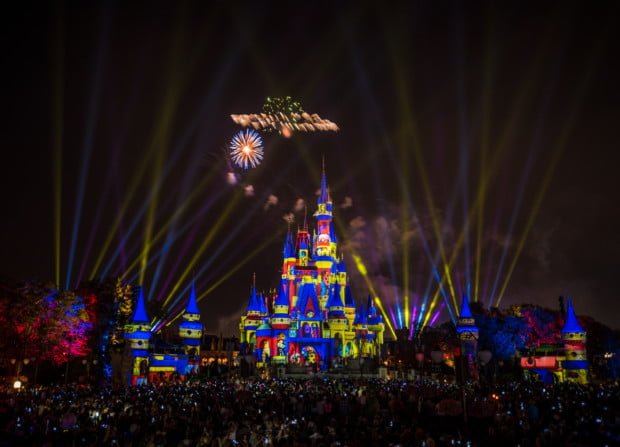 Getting off of that particular soapbox, the projections in Happily Ever After are very well done. I really appreciate that the projections here were quite clearly developed with Cinderella Castle in mind, and take its actual shape into account.

Sure, it’s cool to see the castle used as a giant canvas to fly over London, but I think emphasizing the castle in Magic Kingdom’s flagship fireworks show only makes sense. This approach feels less gimmicky, as if Disney is finding its footing with integrating projections into a show, rather than making that show all about the technology. 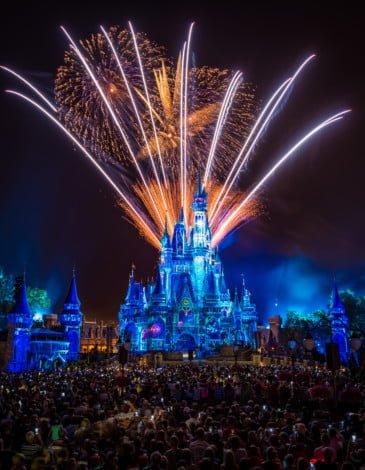 One thing that worried me about Happily Ever After as I started watching was that it didn’t have any narrative to tie the scenes together, such as Peter Pan from Disney Dreams or Mrs. Potts and Chip from Once Upon a Time. I know these “plots” are usually really flimsy and superficial, but I think they normally help give the shows flow and prevent transitions from being too jarring.

Happily Ever After is probably better off without such a narrative thread. There are so many films it races through that adding a framing device would’ve bloated the show. Instead, transitions are accomplished in the music arrangement, visuals on Cinderella Castle, and pyro. 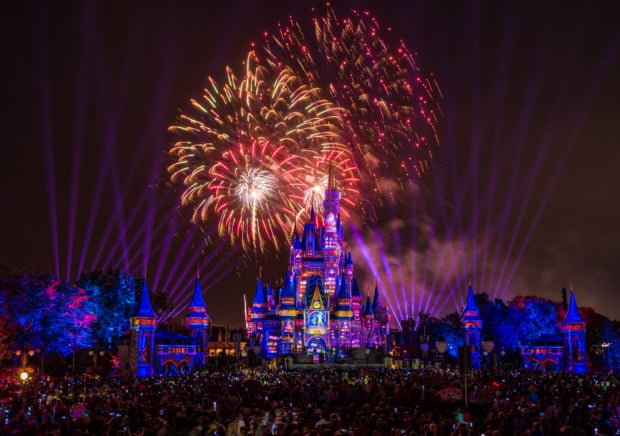 There’s also a thematic progression to the show that makes sense–it goes from adventure to friendship to romance to overcoming adversity to attaining a ‘happily ever after.’ In a sense, this is the Disney animated film archetype, but in montage fireworks show form. There are only, maybe, a couple of instances of choppiness, and they are not at all bad.

For the most part, Happily Ever After has shockingly good flow. I’d mostly attribute this to its soundtrack, which features some excellent arrangements, and eschews some it songs (I’m looking at you “Let it Go”) for less-popular ones that make more sense in the context of the show. The whole stretch from “Friend Like Me” to “I See the Light” is powerful stuff. 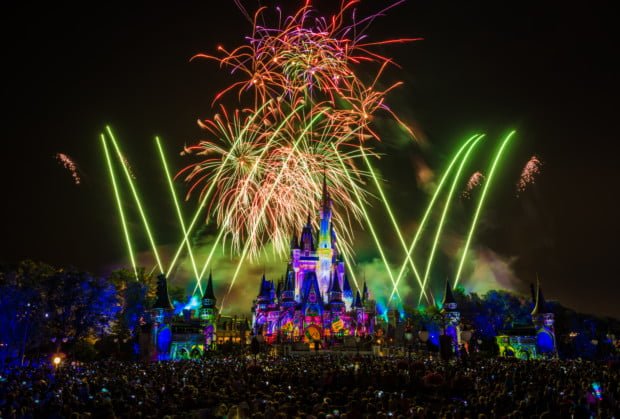 Then there’s the Villains scene, during which Cinderella Castle is under siege, much like during Magic, Music & Mayhem during the Pirate & Princess Party. This Villains scene is not quite as intense as that scene, but it’s still very good.

It was at this point when I questioned whether this is the best Magic Kingdom fireworks show ever. I want to see Happily Ever After a few more times, spaced out a few months so the hype of “new” doesn’t shade my opinion, but at this point I’m leaning towards yes. 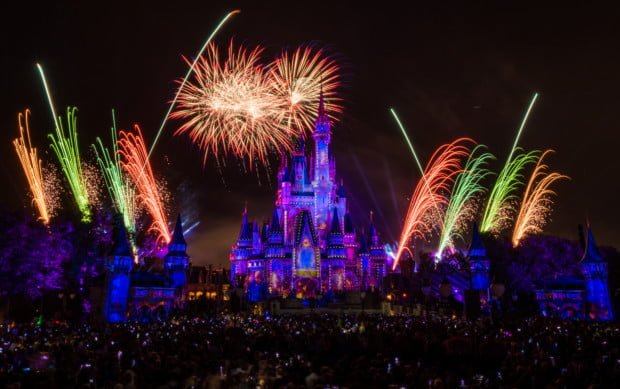 Then there’s “I Can Go the Distance.” If you’ve ever questioned how old a Disney fan you’re interacting with is, just ask their opinion on this song. If they love it, they’re probably a mid-20s Millennial. If they literally any other opinion than that, they aren’t. (That’s a pretty lame and not all that insightful test, but whatever.)

I fall into the “it’s fine” camp with that song, but I loved how it was the lead-in to the best scene of Wishes (“the fan”). Once again, “I Can Go the Distance” offers the best transition of the show, offering an excellent segue from the Villains segment to the grand finale. It’s clever, effective, and tugs at your heartstrings. At this point, I think it’s probably too early to say which parts of Happily Ever After will have long-term nostalgia power, but I’m guessing “I Can Go the Distance” will be one such part. 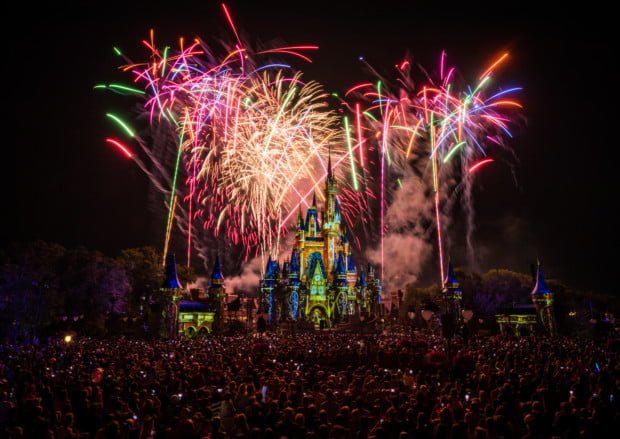 The finale is likewise strong (excuse my poor photo of it above–first time fail), albeit lacking a bit in the pizzazz of Wishes. Beyond that, really the only criticism I can muster of the show is that it could use more lasers. In fairness, that’s a complaint that could be levied at virtually anything–even stuff with lasers. You can always use more lasers.

The shows in Paris and Tokyo demonstrate just what some copious laser action can do to increase the wow-factor, and that would’ve been nice here. The same could be said for mist projects and fountains in the moat, but that would have the potential for operational chaos as everyone would crowd the Hub. 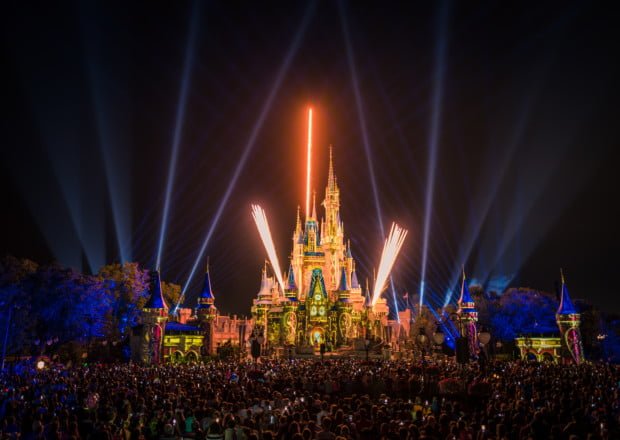 It does not complement Happily Ever After–it just feels like a stylistically-similar but inferior post-show. I assume it’s only still around because Magic Kingdom “needs” two pieces of nighttime entertainment, and there’s still no light parade.

Otherwise, I don’t really have any criticism of Happily Ever After. It exceeded even my most optimistic expectations. I do think some Wishes fans are likely to contend that this show does not resonate emotionally in quite the same way, and perhaps that’s true.

Personally, I found Wishes a bit overwrought, and would also argue that a lot of the emotional heft people have/had for Wishes was the result of years upon years of watching it. Give Happily Ever After a few years and I strongly suspect those emotional bonds will start forming.

Overall, Happily Ever After is the fireworks show that Magic Kingdom deserves. It takes many of the best elements of modern castle park nighttime spectaculars that debuted with Disney Dreams ~5 years ago, and integrates them into a distinctly Magic Kingdom fireworks spectacular. I think it’s better than Wishes, and also better than the nighttime spectaculars in Paris, Tokyo, Hong Kong, and Shanghai. I’d even (reluctantly) admit that it edges out “Remember… Dreams Come True” at Disneyland, although that show will always have my heart because I care more about the parks than the animated films. It’ll be interesting to see whether Magic Kingdom debuts a similar park-centric show for Walt Disney World’s 50th Anniversary, but if not, I think the park has an iconic show that will stand the test of time.

Do you agree or disagree with our take on Happily Ever After at Walt Disney World? Any particular highlights (or lowlights) of the show for you? Any recommended viewing spots? Hearing your feedback about your experiences is both interesting to us and helpful to other readers, so please share your thoughts or questions below in the comments!

40 Responses to “Happily Ever After Review”