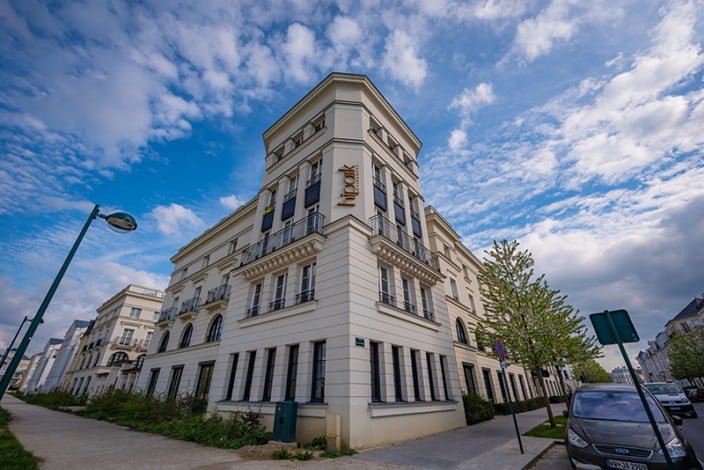 Hipark by Adagio Serris Val d’Europe is an off-site hotel within walking distance of Disneyland Paris. In this review, we’ll share room photos, offer thoughts on the location, and discuss transportation options from Hipark Serris in case the walk is too long for you.

Before we discuss our stays at Hipark Serris in further detail, let’s start with some overview about Val d’Europe. In a nutshell, Val d’Europe is the French equivalent of Celebration, Florida. Both towns were masterplanned and developed by and in coordination with Disney. Both have utilize New Urbanist design principles to create an inviting environment, and both attempt to avoid a cookie-cutter style while still being vaguely modern and somewhat generic.

Val d’Europe feels like the France version of suburbia, but with sensibilities borrowed from French classicism. On the plus side, the city is new and thoughtfully-designed, yet feels lived-in and “real.” On the downside, Val d’Europe definitely doesn’t has the depth or character as you’d find in Paris. How it rates for you will probably come down to expectations and perspective. (It’s better than American suburbs, but doesn’t hold a candle to Paris.)

From a practical perspective, Val d’Europe has a couple of really big advantages. The first of these is Auchan Supermarket Val d’Europe, which is a “hypermarket” (basically the European term for a big-box grocery store hybrid). This store has every food you could possibly need, and is really nice. Since Hipark Serris Val d’Europe has kitchenettes this is a great way to save money. It also doesn’t hurt that Disneyland Paris food is largely not good, so you’re not missing much by doing a large breakfast and even dinner in your room.

The other is shopping. Val d’Europe has a surplus of stores, from regular boutiques and storefronts to malls and outlets. The most notably of these is La Vallee Village, which is a destination luxury shopping outlet with over 110 stores. Think Givenchy, Valentino, Dolce & Gabana, Vesace, Jimmu Choo, Tumi, and so on. This isn’t our scene, but it might appeal to you.

Alright, now let’s talk location and transportation. One of the main reasons we favor Hipark Serris is because it’s the closest hotel to Disneyland Paris if you want to walk to the parks. This is a really straightforward walk along sidewalks that takes you past the police station, through a round-about, past Disney’s Newport Bay Club, and through Disney Village. 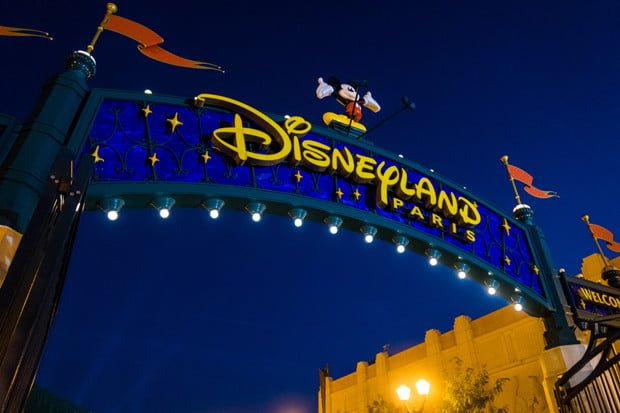 All told, it’s about a 20 minute walk from hotel door to turnstiles. The walk was not any worse than what you’d encounter going from Hotel Cheyenne or Hotel Santa Fe. While 20 minutes might seem a bit excessive, about half of that is on-property at Disneyland Paris, so it’s not bad. We did this several times late at night, and it was perfectly safe and sufficiently illuminated.

If you don’t want to walk to Disneyland Paris, we’d recommend one of those hotels. While Hipark Serris also advertises its free shuttle, when reviewing the schedule, it didn’t look all that convenient. (Unfortunately, I didn’t take a photo of the times table.) We’ve never used the shuttle, so perhaps those who have can weigh in. 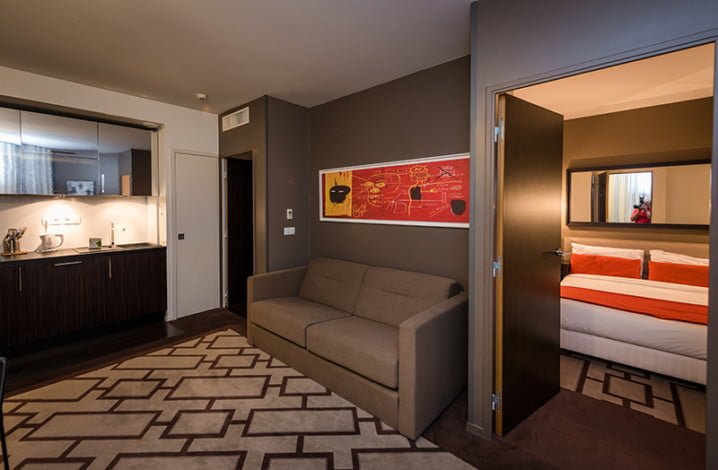 As for the guest rooms at Hipark Serris, there are a variety of options. This is technically an extended stay hotel, so every room has a kitchenette, and is laid out in a way that’s conducive to long-term living.

We think this approach works well. In addition to being good for extended stays, it’s also good for families who like their space. 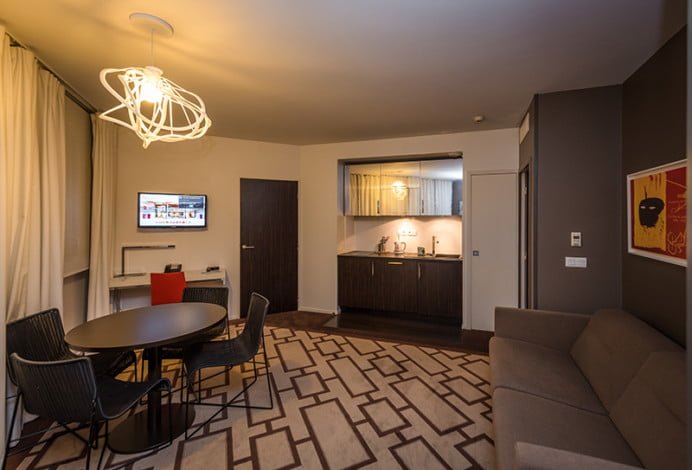 It definitely places a premium on utility over luxury, but the design is still clean and modern, so the room doesn’t feel barebones. There are also enough little touches like the lighting and art that give it some character. It’s still a fairly basic room, but at least it’s not totally dull.

The smallest room at Hipark Serris is the studio, which has one double bed or one sofa-sleeper. This room is 248 square feet, which is slightly smaller than a Disney Value Resort. (Dedicated to DLP has this video tour of a studio.) 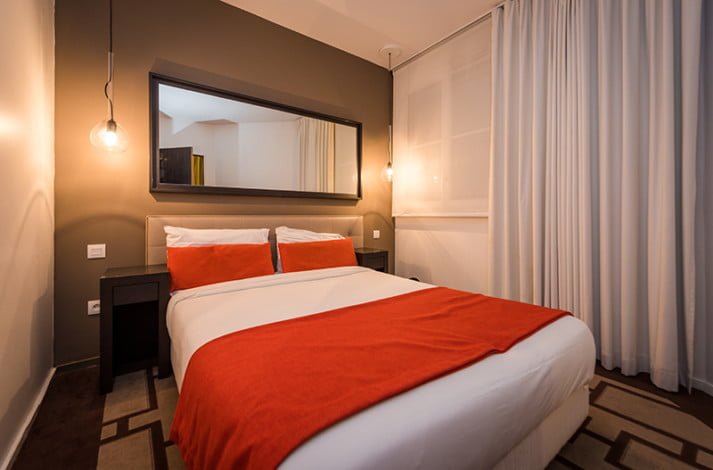 Since that’s a bit cramped and because the cost difference between the studio and the apartment rooms has always been $10-15/night when we’ve stayed here, we’ve always just booked the ‘apartment’ class of room. (All room photos here are of the apartment style room–the sofa in the photos above is a sleeper.)

This room is nice and spacious at 366 square feet in size, and is essentially a 1-bedroom villa by Disney terms. The bed is reasonably comfortable, and the sofa sleeper is serviceable. 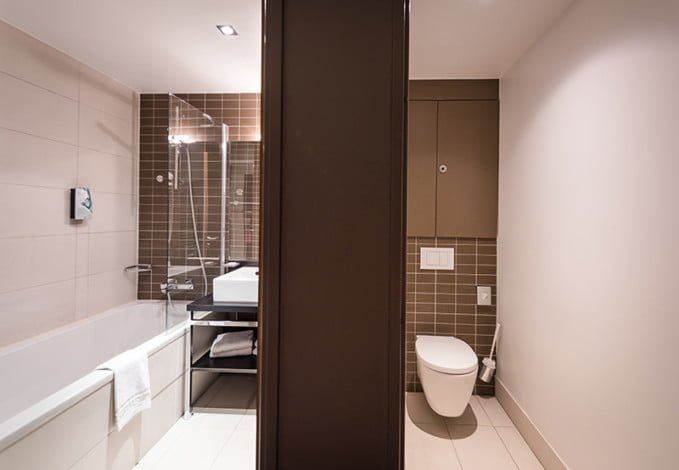 As you can see from the photo above, the bathroom is separated. We like this approach in general, but it’s worth noting both of these rooms are small. Also, be prepared for water to get all over the floor when you shower. This is nothing unique to the Hipark Serris, as the shower door situation is ‘awkward’ throughout Europe. (Or perhaps we’re just bad at showering?)

Ultimately, the Hipark Serris is our favorite hotel near Disneyland Paris because it’s the paragon of luxury, service, or high-end amenities. It’s not. Instead, it offers comfortable, clean, and modern accommodations with a great location at (usually) under $100 per night. Really, that’s what it’s all about for us. These rooms are superior to on-site Disneyland Paris hotels that are comparably sized (and just as far from the parks), and Hipark Serris costs less. If you want something more luxurious or closer to the parks, look elsewhere–but also be prepared to pay considerably more money on-site. Hipark Serris offers exactly what we want, but your mileage may vary.

If you’ve visited Disneyland Paris, where did you stay? Did you enjoy your hotel, or would you rather try another option next time? If you’ve stayed at the Hipark Serris, is there anything with which you disagree in this hotel review? Any other pros or cons? Any questions? Hearing your feedback about your experiences is both interesting to us and helpful to other readers, so please share your thoughts or questions below in the comments!

8 Responses to “Hipark Serris: Our Favorite Hotel Near Disneyland Paris”