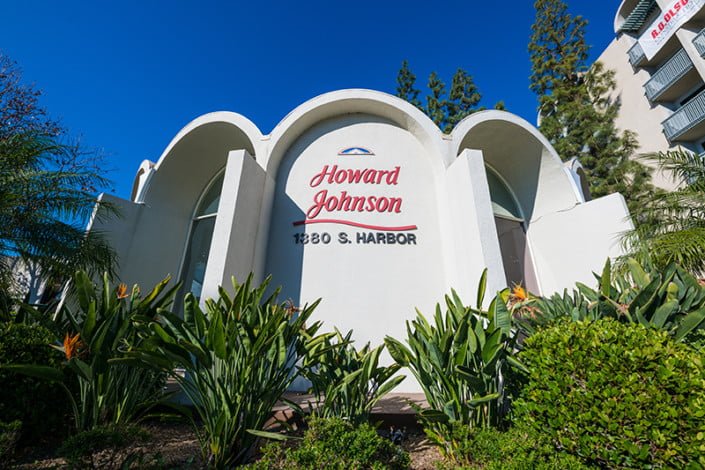 Howard Johnson Anaheim Hotel and Water Playground is an ~8 minute walk from Disneyland and Disney California Adventure. Our review features room photos, thoughts on amenities, and our experience staying at the HoJo Anaheim. We also discuss whether the hotel is a tad overrated, with a reputation based upon a time when Anaheim had little in the way of nice hotels.

For starters, some basics. The Howard Johnson Anaheim is one of ~50 Disneyland Good Neighbor Hotels. As we’ve stressed in other reviews, this is a meaningless distinction. It’s not a seal of approval by Disney, but more of a marketing thing. To get an idea of how the HoJo Anaheim stacks up to the competition, check out our Disneyland Hotels Reviews & Rankings post. You can also read our overall comparison of the benefits of staying off-site versus on-site in our Where to Stay at Disneyland post.

The Howard Johnson Anaheim Hotel and Water Playground is unquestionably the most “well-known” hotel among Disneyland fans. It’s been a presence in the fan community for years, and is the hotel near Disneyland people ask us about the most. With their deep-discount rates they used to offer for Annual Passholders, cool retro-chic style, and gargantuan marketing budget, the HoJo Anaheim has attracted a legion of loyal guests.

I don’t doubt that there was a time when the HoJo Anaheim was one of the best–if not the best–hotel near Disneyland. Prior to the opening of Cars Land, many hotels along Harbor Boulevard coasted by on their proximity to Disneyland. In that era, the Howard Johnson Anaheim Hotel and Water Playground would have been a cut above the rest.

As more and more of these older motels have undergone top to bottom refurbishments, and new full-service hotels have opened, it’s difficult to be all that enthusiastic about the HoJo Anaheim. Sure, it’s a nice option by Anaheim standards from 6 years ago, but six years ago is not today. This is especially true when you consider its pricing, which is not akin to the few holdovers from Anaheim’s motel-era, but is more on par with the modern developments in the area. 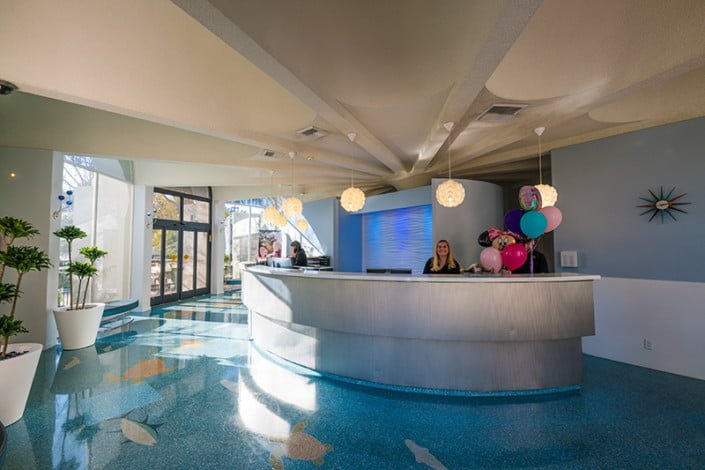 All of this is evident even in the HoJo Anaheim’s own sister property, the Courtyard Anaheim Theme Park Entrance by Marriott, which we love. While that newer hotel is more expensive than the HoJo, it’s also considerably nicer. It feels like the modern day equivalent of what the HoJo Anaheim once was: an off-site hotel a cut above the rest, more on par with an on-site Disney-owned hotel than its off-site competitors.

This is not to say the Howard Johnson Anaheim is a bad hotel near Disneyland. Far from it. Rather, it’s to provide some context and a preface to why this review is not as gushing as others you might read about the HoJo Anaheim. 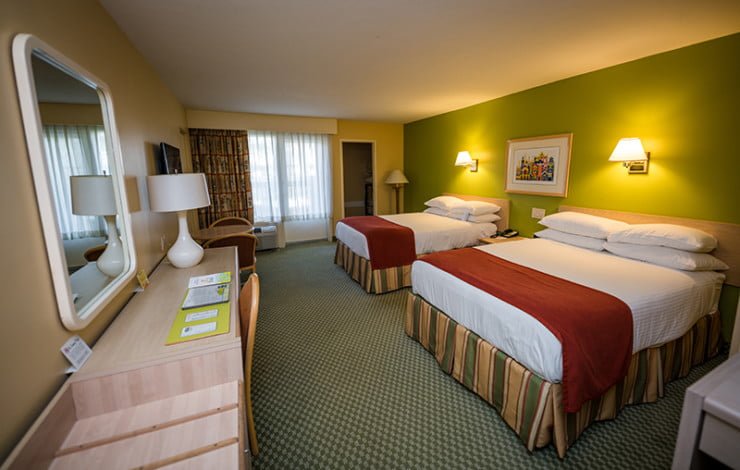 The rooms at the Howard Johnson Anaheim are amply-sized and well-maintained, but dated. Not dated in a retro-styled sort of way like you might expect given how the hotel embraces its mid-century charm–just dated.

Nevertheless, we found the beds to be comfortable and the caliber of the accommodations is definitely nicer than what you’ll find at other nearby motel-style hotels in Anaheim. It’s also clear upgrades have been made in the last decade or so, with Keurig coffee/tea maker and 32″ LCD televisions. 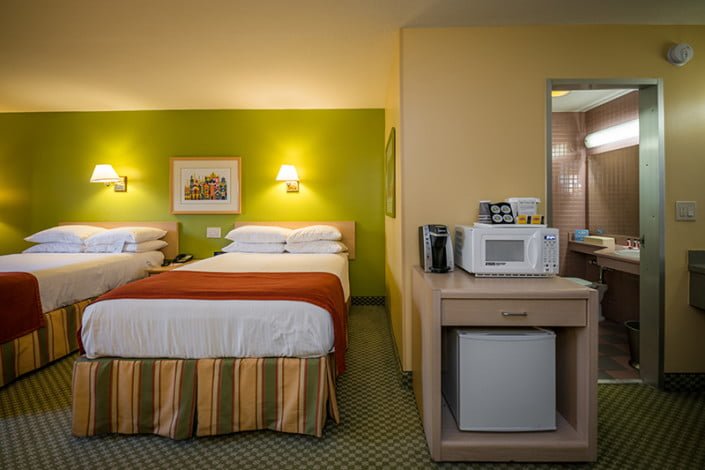 There are also mini-fridges and microwaves, and again, the spacious nature of the room shouldn’t be understated. It’s also nice to have a second sink outside of the bathroom, especially since the bathroom itself is pretty cramped.

One quibble here: the WiFi connection was spotty for the duration of our stay, and downright unusable at times. We headed to Starbucks on a couple of occasions to work. 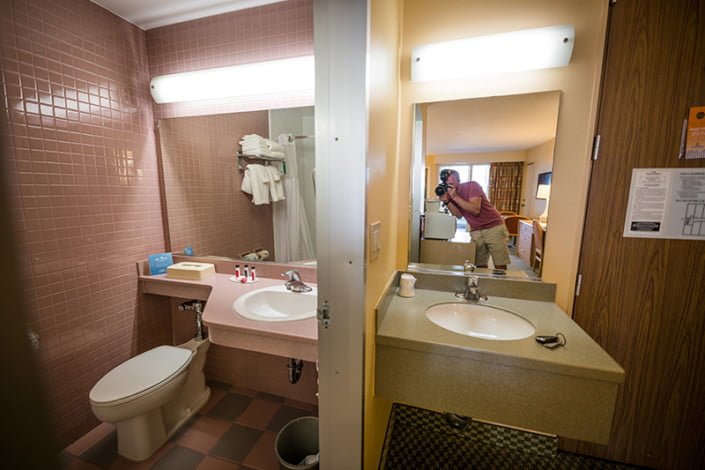 This circles back to the common theme of this review: at one point the rooms at the HoJo Anaheim would’ve been the gold standard of off-site hotels near Disneyland.

Many of the modern tower-style hotels that have been built in the last few years have nicer, larger rooms, and far superior amenities. Again, many of these newer hotels are comparable to the HoJo in terms of price–that’s the power of marketing and this hotel’s longstanding reputation. 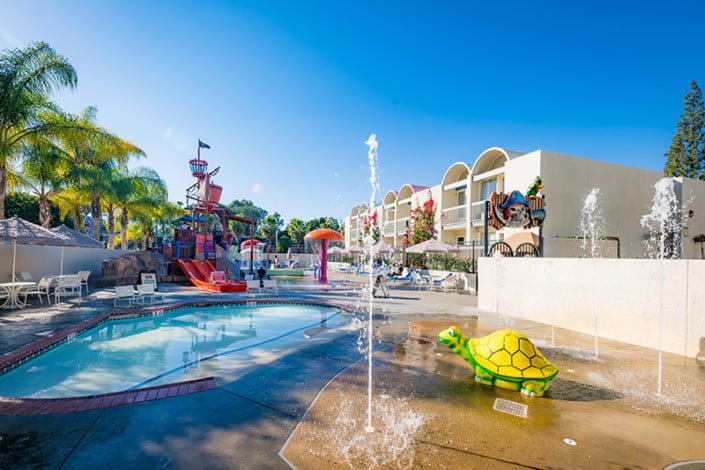 The Castaway Cove pirate-inspired water playground is potentially a nice selling point for families. The water play area at the newer Courtyard next door is significantly nicer, but that hotel is also more expensive.

We would caution that the water play area is much smaller than we anticipated, and likely won’t appeal to kids over the age of around 8. The hotel’s other pool is considerably nicer than the Anaheim norm, and was fairly quiet and low-key when we walked past it. 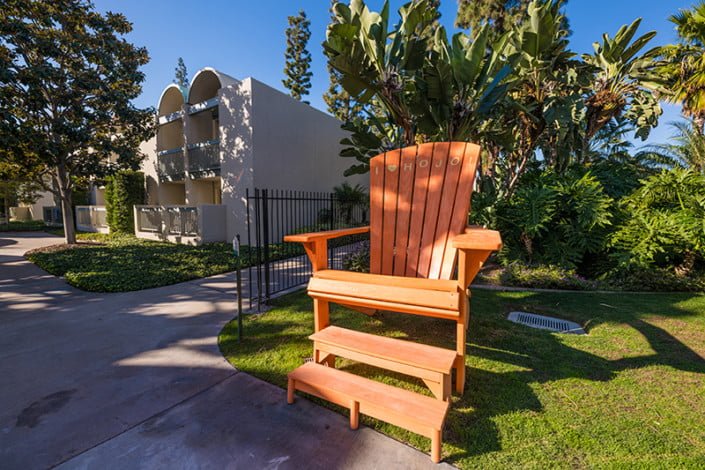 For us, the bigger selling point was the resort-style landscaping of the Howard Johnson Anaheim. There’s a good amount of lush landscaping, gardens, and this coupled with the large patios and balconies the rooms offer is a very nice touch. All of this does an excellent job to make the hotel feel apart from Anaheim–you’d never know the I-5 freeway is right behind it. (Well, perhaps you would if you’re staying in the tower, but we never heard or saw the freeway.)

Other amenities include two guest laundry rooms, a playground, and a convenience store. Aside from the landscaping, the other big perk of the HoJo Anaheim is that its one of the few hotels in the area that still offers free parking. There are also no resort fees, or any other hidden charges. 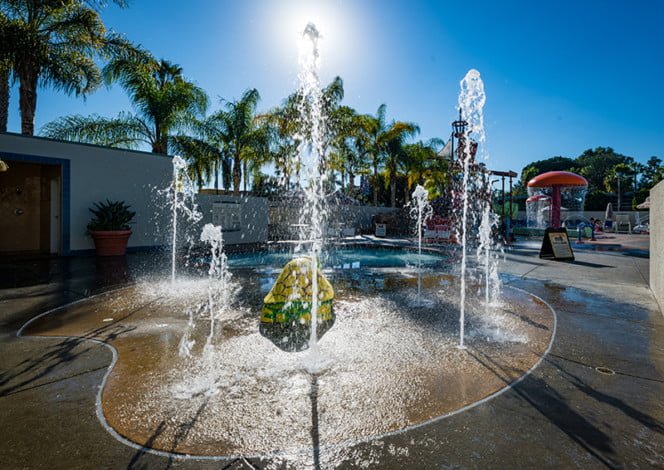 Two potentially-important amenities are notably missing from the Howard Johnson Anaheim: a fitness center and restaurant. While the HoJo advertises Mimi’s Cafe as being its restaurant, it’s across an intersection–not at the hotel.

They might as well claim the nearby McDonald’s or Panera Bread as hotel dining options. (For what it’s worth, we do think the fact that you’ll walk past both of those restaurants on your way to Disneyland and Disney California Adventure is a potential selling point.)

Ultimately, Howard Johnson Anaheim Hotel and Water Playground is a good option depending upon your preferences and budget. It’s not the best hotel near Disneyland, but it’s better than average. Our qualms with the HoJo essentially boil down to this: it’s overpriced for its actual quality-tier, and we don’t believe it has any significant selling points that make it worthy of consideration over alternatives in the area–especially at the same price point. It’s potentially good in some situations, but not because it’s “the best” or anything of that sort. Don’t buy into the outdated hype.

Do you agree or disagree with our assessment of the Howard Johnson Anaheim? Do you think it’s one of the best hotels near Disneyland…or overrated? Any questions? Hearing feedback about your experiences is both interesting to us and helpful to other readers, so please share your thoughts or questions below in the comments!