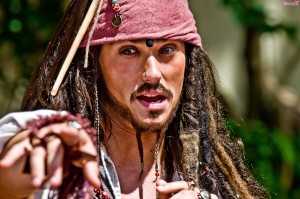 Last night, Johnny Depp was inside the sets of the Pirates of the Caribbean attraction at Disneyland, dressed up as Captain Jack Sparrow. He appeared to be ad-libbing a bit and interacting with guests whose boats he desired to “commandeer.”

For years, there have been urban legends that Johnny Depp would sometimes do this, or would appear as Captain Jack Sparrow in meet & greets or parades. Unlike many Disney urban legends, these were not quite so easy to disprove. On the one hand, it seemed highly implausible. After all, there’s security and operations to consider, plus…why would he want to do it?

On the other hand, Johnny Depp is a bit, ahem, quirky, so who knows if this was the type of thing he would’ve enjoyed. It doesn’t seem totally out of the question that Eisner/Iger would have a red “Depp-Phone” on their desk that Johnny could ring whenever we wanted to chill in the AC of Pirates of the Caribbean sets and smell that glorious funky water. Plus, these rumors were often from entertainment Cast Members who would have first-hand knowledge. The rumors were not just coming from guests who could’ve mistaken the “lifelike” Audio Animatronics figure for Depp, or been fooled by a doppelgÃ¤nger performer.

Who knows if those old urban legends were actually true, and why Depp would’ve been there if they were. This time, it’s Walt Disney Studios Motion Pictures filming Depp on location at Disneyland, both inside the attraction and out. It’s possible the footage will be used as promotional material for Pirates of the Caribbean: Dead Men Tell No Tales, which hits theaters May 26th.

Thanks to the wonders of smartphones and Twitter, we have several videos of Johnny Depp’s limited appearances inside Pirates of the Caribbean:

Sorry for the crappy quality and shakiness BUT I SAW #JOHNNYDEPP AT DISNEYLAND! 😍 my week has been made. pic.twitter.com/oUB7W6R9SQ

Disney announced yesterday that Disney/Jerry Bruckheimer Films’ Pirates of the Caribbean: Dead Men Tell No Tales will have its World Premiere in Shanghai, China, at Shanghai Disney Resort on May 11, marking the first time a Hollywood movie will premiere in Mainland China. Johnny Depp, Orlando Bloom, Geoffrey Rush, Javier Bardem, and producer Jerry Bruckheimer, among others, plan to attend the gala event.

The red-carpet event will take place in Disneytown at Shanghai Disney Resort. After the red carpet, the “Pirates of the Caribbean: Dead Men Tell No Tales” screening will be held in Walt Disney Grand Theatre at Disneytown. Shanghai Disneyland’s Treasure Cove is an entire land themed to Pirates of the Caribbean, and the flagship attraction there focuses on the film characters.

It’s also possible that the footage shot of Depp in Disneyland will be used for promotional video at Disneyland Paris, which is currently refurbishing its Pirates of the Caribbean to add Jack Sparrow and other film franchise characters. Another outside possibility is that the footage will be used in Japan to promote “Disney Pirates Summer” at Tokyo DisneySea. That park does not feature a Pirates of the Caribbean attraction (it’s next door in Tokyo Disneyland), though.

In other words, we don’t know why the promotional filming occurred, but there are plenty of possibilities. Regardless of the exact reason, expect a promotional blitz for both the film and theme park attractions this summer. It seems unlikely that Johnny Depp will appear inside Pirates of the Caribbean again, but it’s likely to be all over social media if he does. We’ll keep you posted should Tim Allen appear in the set of Buzz Lightyear’s Astro Blasters…