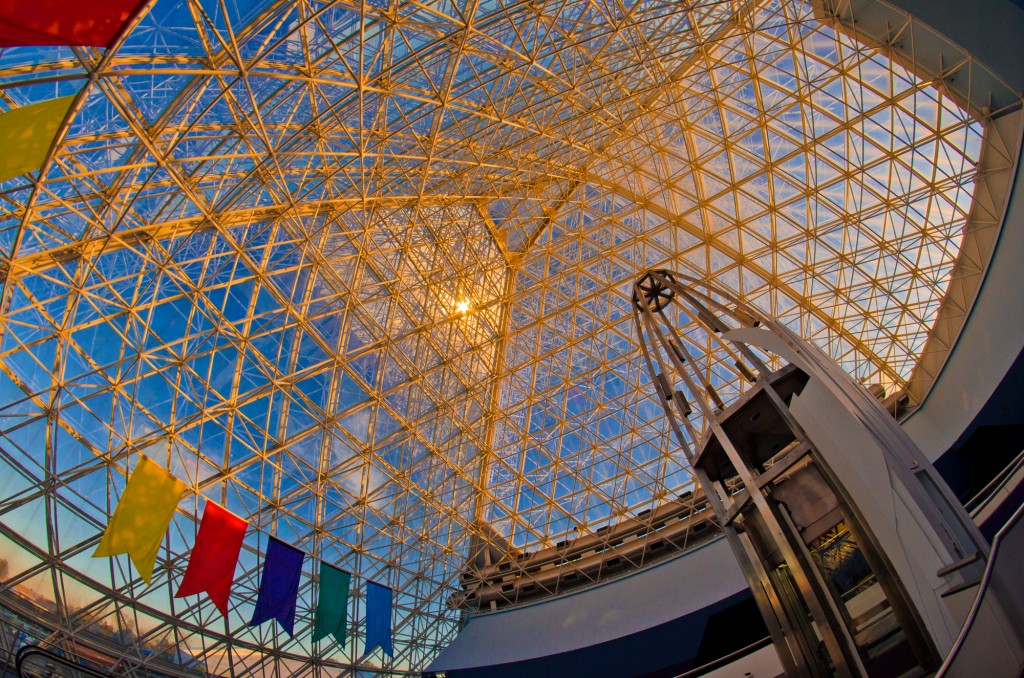 It’s little secret that the original Journey into Imagination is my all-time favorite Walt Disney World attraction. Without it, you wouldn’t be reading this blog (because it wouldn’t exist), and it’s highly unlikely that Sarah and I would take so many trips to Walt Disney World as adults. The entire pavilion oozed of (as cliche as this may sound) “imagination,” and it truly sparked my inquisitiveness and curiosity as a child. I’d ride the attraction over and over and wander around the upstairs ImageWorks for hours on our visits to EPCOT Center.

While my parents would wander around World Showcase in the afternoon, I’d be off in my own world, embarking on various adventures with a PVC toy Figment I purchased with money I had earned from my chores in the months leading up to our annual Walt Disney World trips. One trip, I was able to scrape enough money together to purchase a small Figment plush. He accompanied us on every subsequent trip to Walt Disney World, and still joins Sarah and me on our trips to this day. (He’s even visited Disneyland!) Most kids prefer Magic Kingdom, but my favorite park was EPCOT Center. Some EPCOT Center fans lament the loss of Horizons. I don’t even remember Horizons, but I can recall each scene in Journey into Imagination in vivid detail. Suffice to say, the original Journey into Imagination has had a substantial impact on my life as a youth and my life as an adult.

As we all know, the middle Act of this story followed the typical arc, with Journey into Imagination reaching its low point in late 1998 when the pavilion was stripped of all things related to imagination. This wasn’t as a low of a point as it could have been for me, personally. We only took one trip as a family to Walt Disney World after the closure of Journey into Imagination, and I was in that regrettable teenage maturation state that made me “too cool” for most things Walt Disney World had to offer.

In the past year, I’ve had the wonderful opportunity to experience a few things related to the original Journey into Imagination. In May 2011, I had the chance to meet Tony Baxter and briefly discuss the original pavilion with him. Later that same trip, I had the near out of body experience of seeing Dreamfinder, Figment, and Richard Sherman perform “One Little Spark.” In December, I was able to meet and chat with a close friend of Dreamfinder.

About a year prior to our February 2012 trip, I became aware of guests catching glimpses of the upstairs ImageWorks area through various tours and unauthorized expeditions. At that time, I began attempting to gain access to this playground of my youth. Unfortunately, the tours are expensive and often don’t even visit the ImageWorks, and I value my privilege to be able to visit the theme parks far too much to risk an unauthorized expedition.

Finally, in February 2012, I was able to access the upstairs ImageWorks.

The elevator ride up seemed like an eternity. It was as if I wasn’t aboard an elevator at all, but rather a slow-moving time machine back to the early 1990s. When I stepped out of the elevator, I couldn’t help but smile ear to ear, as so many memories that I formed up there came rushing back to me. I was only upstairs for a few minutes, but it seemed like time had stopped while I was there. As I looked out the glass pyramids towards Spaceship Earth, a monorail passed, and the sunset was casting a warm glow over The Land. For some reason, I couldn’t help but feel like I was standing right in the heart of EPCOT Center. After looking around a bit more, it was time to leave. For a good twenty minutes afterward, I just sat near a planter outside of the Imagination pavilion, still a bit dumbfounded by the experience. I know to most people, I was just standing in an unused space in some corner of a theme park, but to me it was so much more. Hopefully this resonates with some of you and doesn’t just seem like the overwrought story of some odd theme park experience.

In my heart, I know the story of Journey into Imagination isn’t over. The final act is about to begin. What’s presently unclear is whether the story is a drama, which will result with a return to glory of the once imaginative pavilion, or a tragedy, wherein the Imagination pavilion will suffer a fate similar to Wonders of Life. I think you all know what I’m rooting for!

21 Responses to “A Journey Into Lost Imagination”