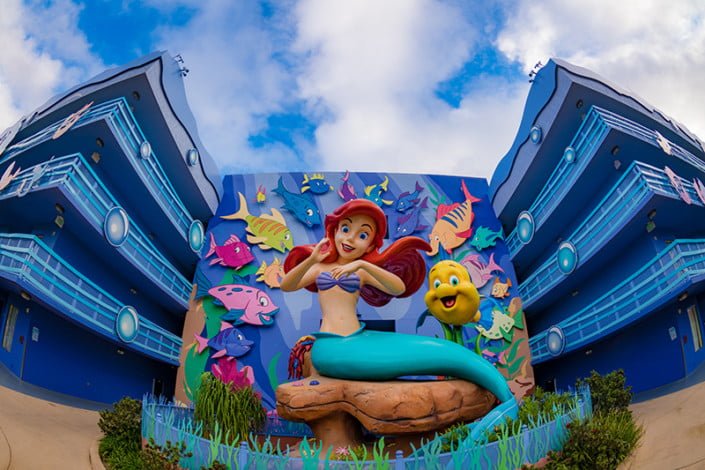 This review has been a long time coming. When originally writing our Art of Animation Family Suites Review, we included a line that we’d review the Little Mermaid rooms “very soon.” That review was first published 4 years ago and we’re just now writing this review. Better late than never, I suppose?

Our delay in staying in and reviewing the Little Mermaid rooms wasn’t for lack of effort. We have priced these rooms out no less than two-dozen times for various trips, and the price has always been too high to justify. Initially, we balked at the price, thinking it’d come down over time or eventually be included in discounts as popularity wore off. (As if the movie released in 1989 was suddenly going to wane in popularity.)

That never happened, and we ended up paying more for our stay this year than we would have if we just stayed there back when Disney’s Art of Animation Resort first opened. I’m actually a bit embarrassed to admit that we paid $140/night to stay here, which is more than we typically pay for Moderate Resorts after discounts.

I’m mentioning all of this not as a plea for sympathy or so you’ll respect the tough research we do, but as a reality check so you have an idea of what to expect here. The rate we paid is the value season rate for the Little Mermaid rooms. That’s the cheapest they get–you can expect to pay above $200/night if you travel during the summer or around holidays.

While the Little Mermaid rooms at Disney’s Art of Animation Resort are often touted as being a small surcharge over the other Value Resorts, this is a bit deceiving. The rooms started out as a $20/night surcharge, but that has climbed to more like $30-$50/night, and that’s when comparing rack rates. 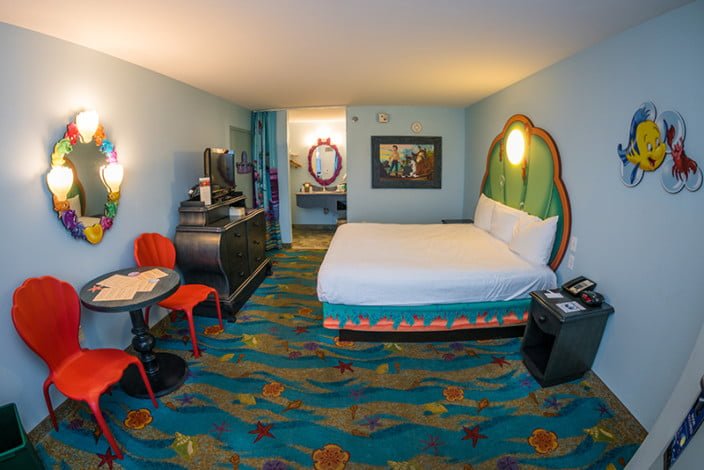 Objectively speaking, the Little Mermaid rooms at Disney’s Art of Animation Resort are not worth the money. These are small motel rooms, and rather than having elaborate theme and details, they have fairly cheap decorations scattered around. The carpet is probably the coolest element of the room, and that isn’t saying much.

That’s not uncommon for a Value Resort, but the lazy thematic effort is disappointing given what you’ll pay here. For the cost difference over the course of a weeklong vacation, you could easily afford to make a stop at Party City and buy a boatload of decorations and make your own Little Mermaid “themed” room. I wish I were kidding. 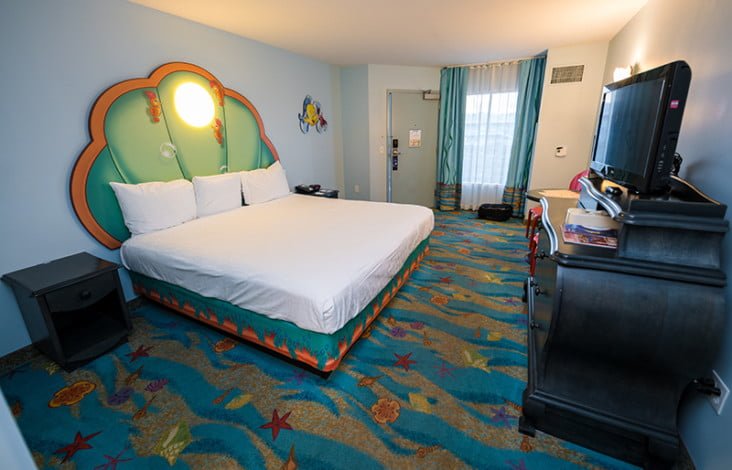 None of that probably matters to those of you considering the Little Mermaid rooms. The calculus is not a rational one, but an emotional one. Sarah’s first comment when walking around the room was how much she would’ve liked it as a kid. That’s probably what you’re asking yourself, too. Will your kids love the room? You probably already know the answer to that, and no review is really necessary.

However, in the event that a review is necessary, let me attempt to dissuade you from staying at the Little Mermaid rooms. First, your child or children probably like more than one Disney film aside from the Little Mermaid. In which case, stay at the Port Orleans Riverside Royal Rooms (read and see more in our Royal Rooms Review). Those are a significantly better option for only a small premium in pricing after discounts. 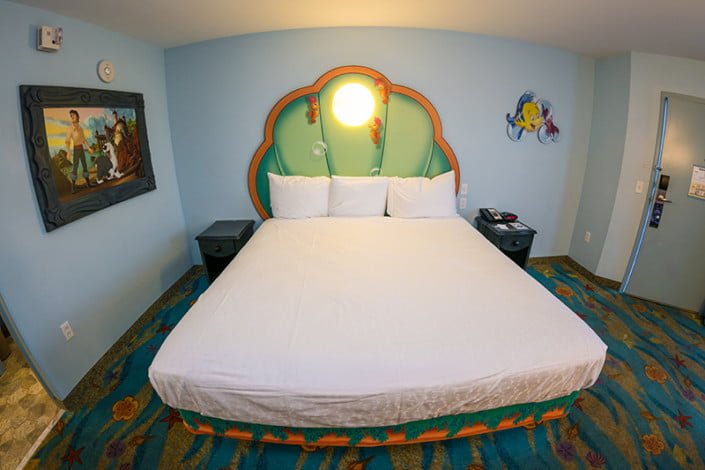 Second, these rooms are in the worst possible location at Art of Animation, farther from the main lobby than the Lion King, Cars, or Nemo family suites. Depending upon the exact location of your room, this could mean a 10+ minute walk to the bus stop.

Finally, your kids only know what they tell them. These are All Star-caliber rooms (they aren’t even as nice as the rooms at Pop Century) that leave a ton to be desired in terms of space and quality. For $140-200/night, you don’t even get a coffee maker. 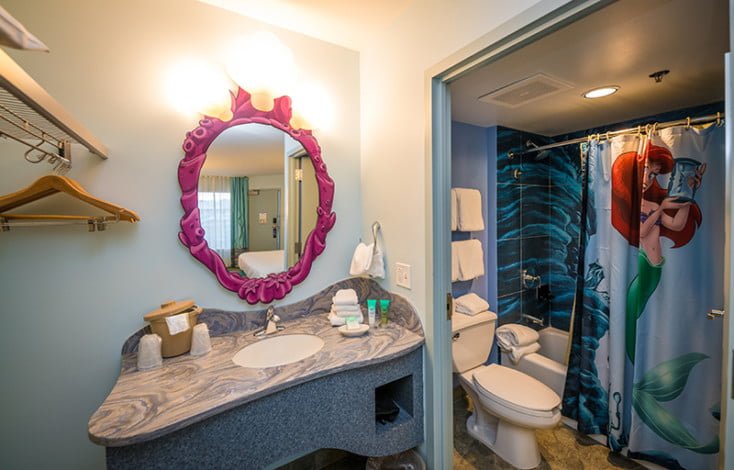 If you don’t tell your kids these Little Mermaid rooms exist, how are they going to know? (I guess maybe one of their punk friends could tell them.)

Rather than catering exclusively to their whims, opt for a nicer room at a cheaper price elsewhere. Put the savings towards an experience at Walt Disney World they will enjoy that actually is worth the money. 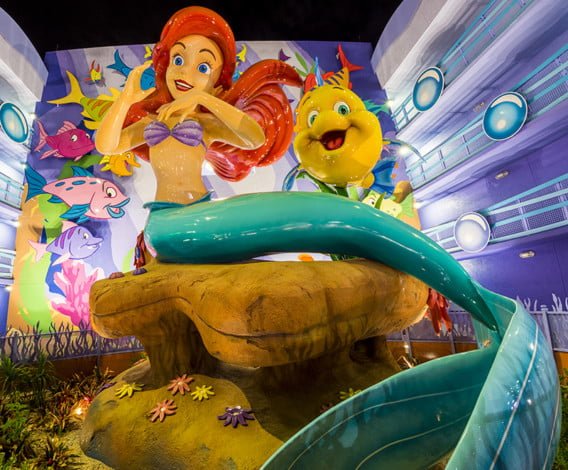 Now, this is not to say that you shouldn’t stay at Disney’s Art of Animation Resort. To the contrary, we rather like the resort, and think its common areas have a lot of appeal for families with small children. In fact, Art of Animation is my pick as the best Value Resort at Walt Disney World.

While I think some elements of the design could be better, there’s undeniable appeal in the resort, and walking around the common areas is a fun experience. It’s not Walt Disney World theming in the traditional sense of transporting guests to a different time and place, but there’s a certain charm to the oversized characters, elements pulled from Disney animated classics, and vibrant colors. 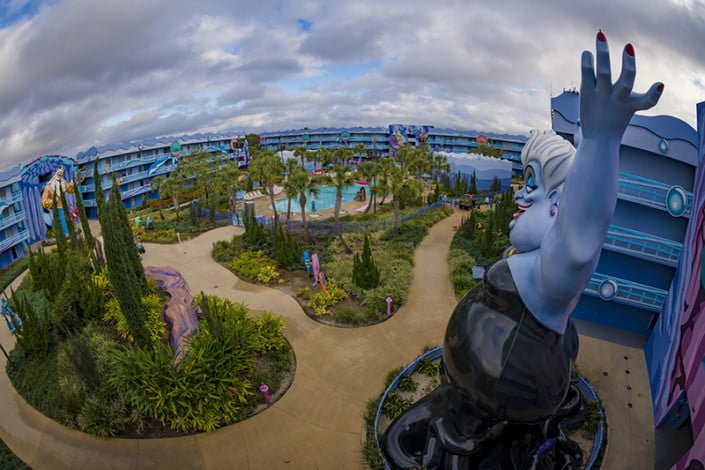 There’s absolutely no nuance to Art of Animation, but (and I really hate to use this line) kids love it. Art of Animation is whimsical and fun, and can work for some adults, too. And unlike the slipshod design of the Little Mermaid rooms, the common areas and family suites have considerably more depth and detail, and are arguably worth the money. 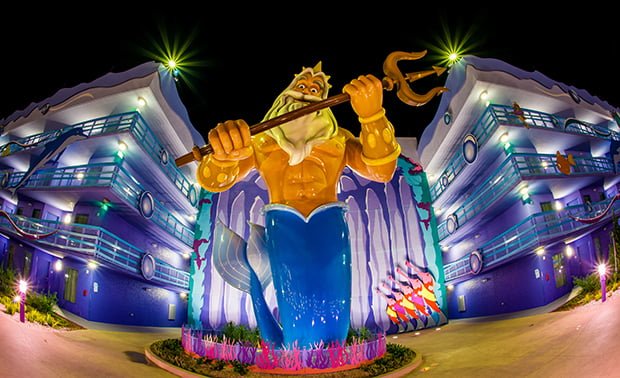 Generally speaking, we fall into the “love it” camp with regard to Art of Animation. However, that enthusiasm does not extend to the Little Mermaid rooms. The decor is simply too weak, the price too expensive, and the size too small. While they are more expensive, we’re much bigger fans of the family suites, and feel the proportionate value for money they offer is higher.

By contrast, the Little Mermaid rooms feel like an afterthought, as if Disney didn’t know what to do with those buildings once the Pop Century ‘Legendary Years’ project fell through and the buildings were abandoned for a decade. (That’s what the Little Mermaid rooms were originally intended to be, and exactly what happened. For those unfamiliar with the history of Pop Century’s Legendary Years, you can find it here.)

If you’re inclined to ignore us and book a stay in the Little Mermaid rooms, you can take some solace in knowing that the resort’s general amenities are nice. We already covered this in our family suites review, so we’ll keep this section brief… 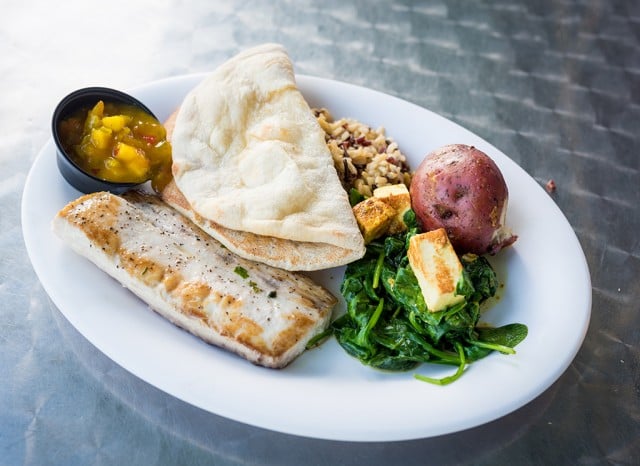 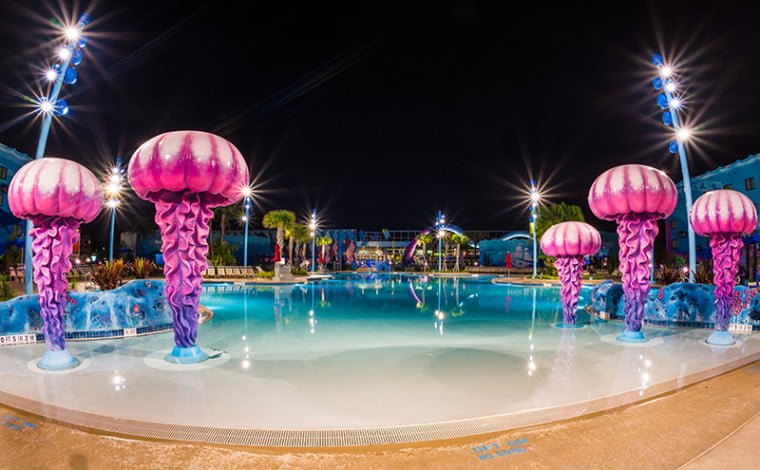 The pools are also solid at Art of Animation. The Big Blue Pool is the only Value Resort pool to not allow pool-hopping, and is pretty cool. We think it’s slightly overrated, but it’s still a strong–and huge–pool. I actually prefer the Cars pool, which is quieter and has a neat look with the Cozy Cones nearby.

Overall, this review was probably entirely unnecessary. Like we said at the outset, there was a good chance you probably already knew whether the Little Mermaid rooms at Disney’s Art of Animation were a “must-do” for you, or something you should skip. While we both really enjoy Disney’s Art of Animation Resort, we would never do the Little Mermaid rooms again. We’d pay more for a family suite at Art of Animation or the Royal Rooms at Riverside, or (if it’s just us) less money for a nicer standard room at Pop Century. The price of these very basic motel rooms is too much for us to stomach, and that would be true even if we had kids who were the biggest Little Mermaid fans of all time.

Do you think Disney’s Art of Animation Resort is for you? Have you stayed in the Little Mermaid rooms? Do you think they were worth the money, or were you disappointed? Do you want to stay here? Any questions we can help you answer? Hearing feedback about your experiences is both interesting to us and helpful to other readers, so please share your thoughts below in the comments!