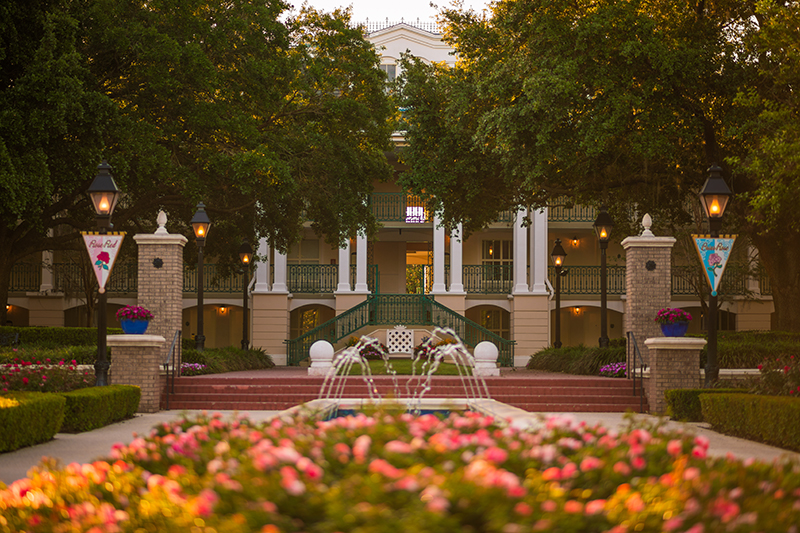 Royal Rooms at Port Orleans Riverside are the only princess-themed guest rooms at Walt Disney World, featuring Tiana’s friends from animated films such as Aladdin, Beauty and the Beast, Cinderella, Little Mermaid, and Snow White. This hotel review features room photos, thoughts on staying in the rooms, and whether they’re worth the extra money. (Updated October 23, 2021.)

We’ve separately reviewed Port Orleans Riverside, so this will focus solely on the Royal Rooms. If you’re interested in the amenities and thoughts on the resort as a whole, read our Disney’s Port Orleans Resort – Riverside Review. That covers pools, transportation, amenities, regular rooms, dining, and much more.

Spoiler: Port Orleans Riverside is #1 on our list of Moderate Resort Hotel Rankings at Walt Disney World. Being big fans of the resort already, we were curious as to whether the Royal Rooms improved the experience or whether spending extra for the themed room was a worse option.

October 23, 2021 Update: Port Orleans Riverside recently reopened after a year-plus closure. During that time, it was expected that the Royal Rooms would receive a soft goods refurbishment consistent with the regular rooms (see our New Rooms at Port Orleans Riverside post for a photo and video tour). That was the plan pre-closure, and it was our understanding that the project was already underway.

For whatever reason, the Royal Room refurbishment was not completed. We’ve now heard from guests who have stayed in 3 different Royal Rooms, and all look identical to what you see here, minus bed runners. That’s probably a good thing, given the trend to remove carpet and other decorations that are harder to clean and maintain. It’s possible there are some renovated Royal Rooms, but if so, we’ve yet to see photos or hear reports on them. 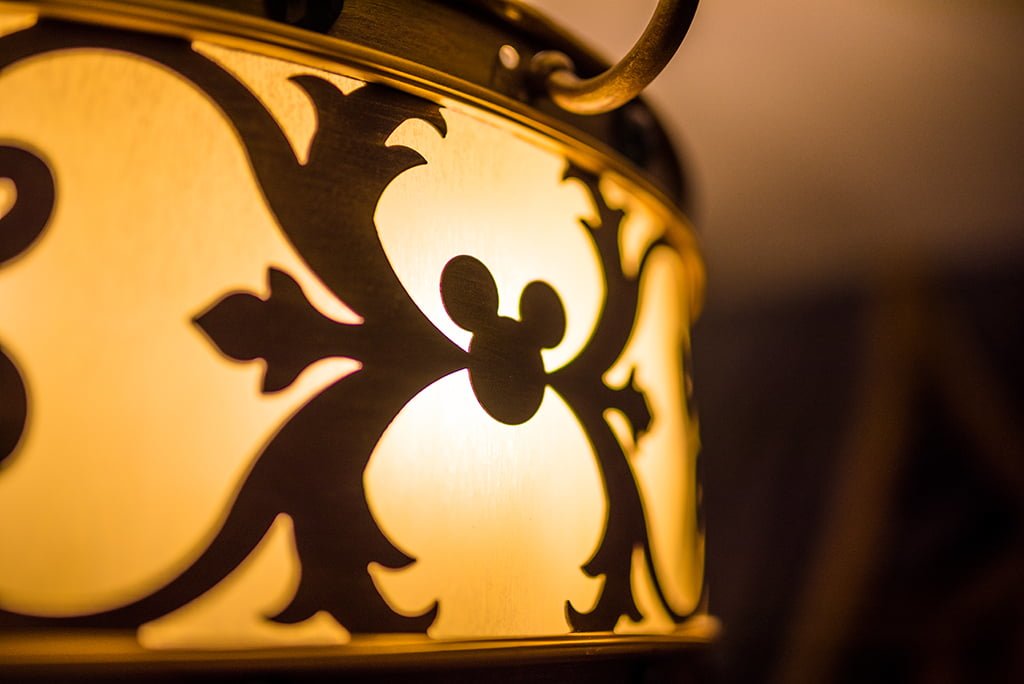 We really like the Royal Rooms at Port Orleans Riverside, and are happy they seem to have survived the resort refurbishment project. It might come as a surprise to some of you that we like these rooms, given that our review of the Pirate Rooms in Caribbean Beach is not exactly positive. As such, it’s understandable to expect something similar here.

Going into the experience, my big concern was that these were going to be otherwise undesirable rooms that Disney had minimally “princess-ified” a bit to capitalize on the insatiable demand for all things princesses. That more or less seems to be what happened with the Pirate Rooms, in my view. Fortunately, that is not the case with Port Orleans Riverside’s Royal Rooms. 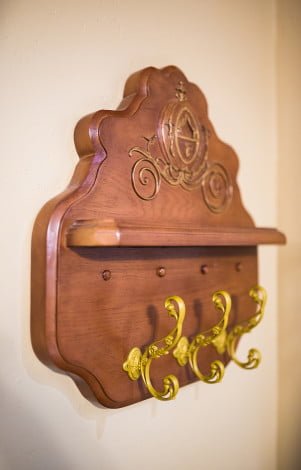 Unlike the Pirate Rooms, which I think are technically in Georgia and are a hellacious hike to Old Port Royale (pool, food court, etc.), the Royal Rooms are the equivalent of Preferred Rooms in Alligator Bayou in terms of distance from the lobby and food court. All of the Royal Rooms are located in Magnolia Bend, and even the most distant rooms should be less than a 10-minute walk from the food court.

Note that the Royal Rooms are sub-divided into River/Garden/Pool View rooms and Standard View rooms, with the former having about a surcharge most nights. The view is immaterial. Moderates have exterior hallways and no balconies, so it’s not as if you can enjoy that view, anyway. 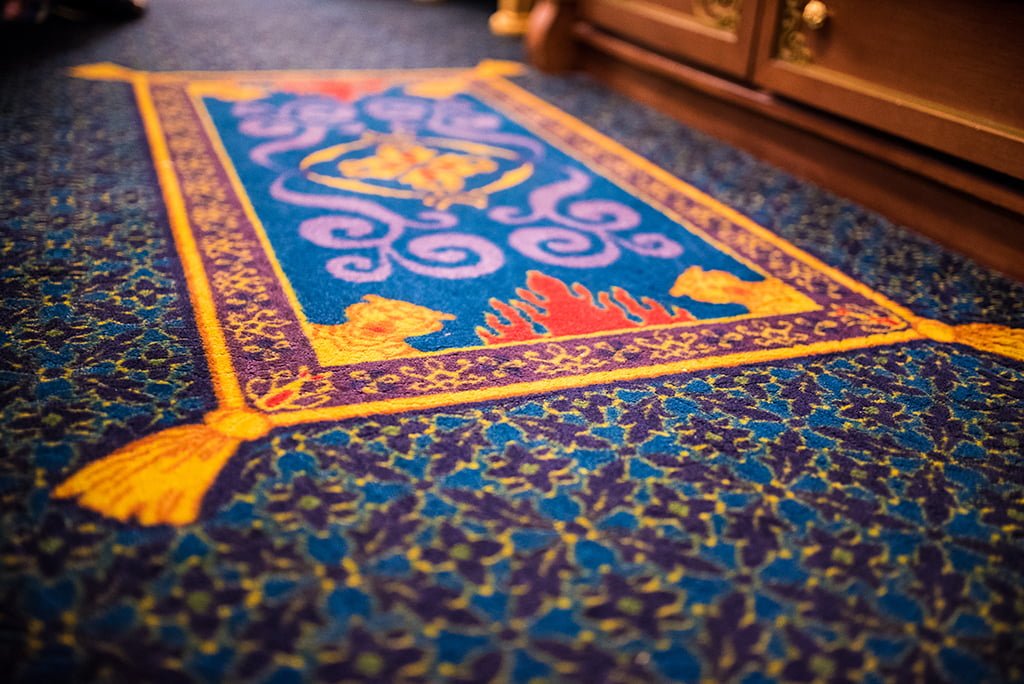 What might matter is location, as the rooms with a view are also going to be slightly closer to the bridge leading to the lobby. In most cases, the distance is going to be negligible (we were placed in what I assume was a Garden View room despite paying for a Standard View), but it might matter to you. I wouldn’t pay anything for the slight location difference.

The generally good location of all of the Royal Rooms does help make their cost more palatable. With average rates that are over ~$60/night more than a standard view, Royal Rooms aren’t cheap. 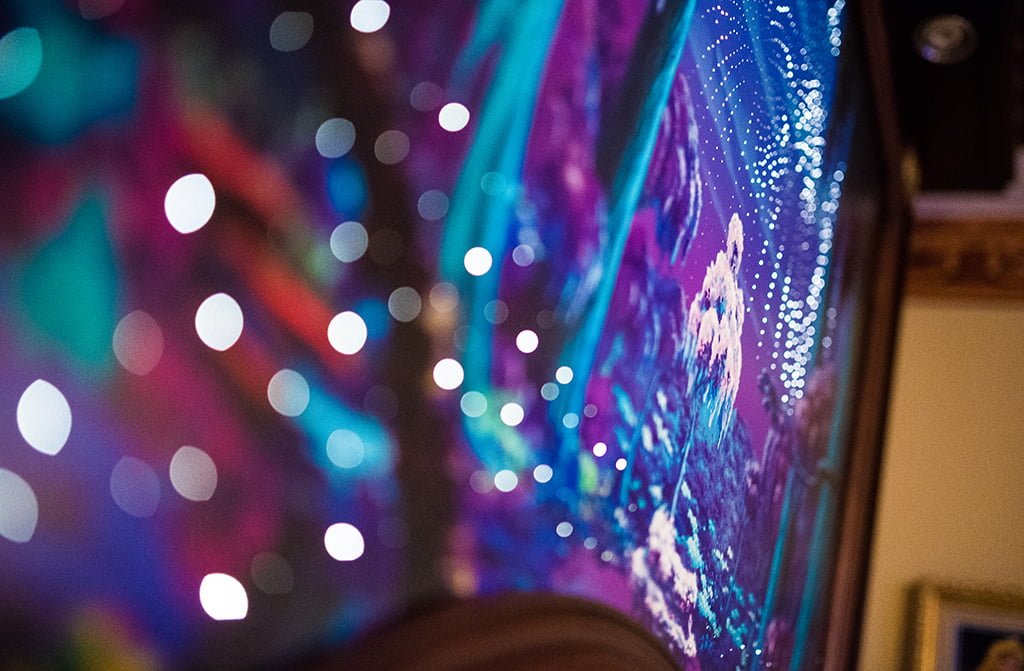 However, if you’d be getting a Preferred Room, anyway, that difference is cut down to ~$25/night. That’s much easier to justify.

Given that the theme of this room could be the highlight of the trip for your kids, I could totally see dropping the extra $25/night to see their eyes light up when you turn on those fiber optic headboards each night before they fall asleep. 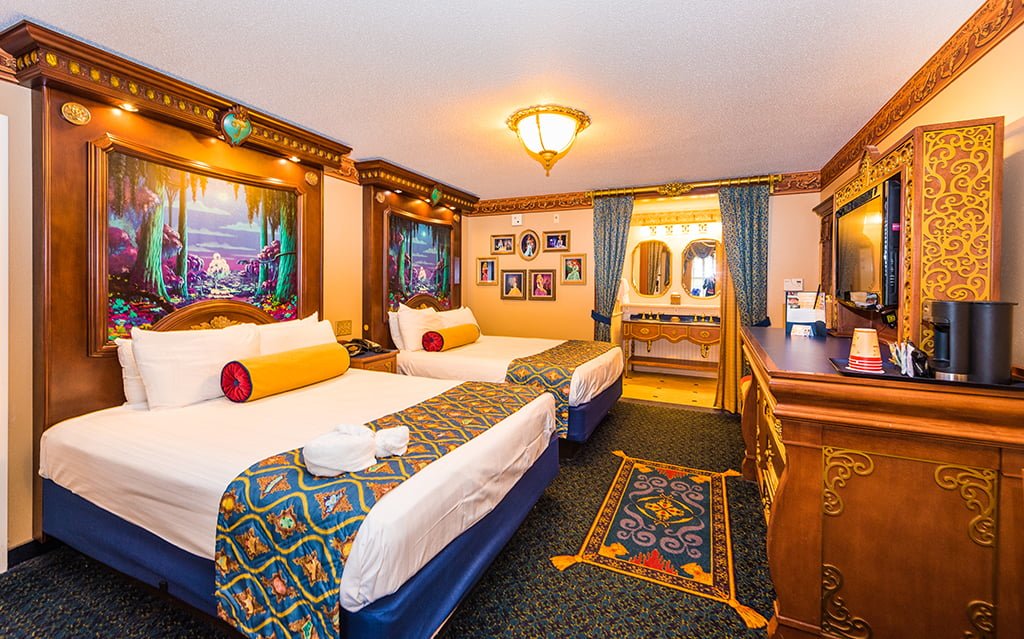 Speaking of which, the biggest selling point is obviously going to be the decor. This is one aspect of the Pirate Rooms that I thought was okay–it failed to wow me, but I’m also not a 6-year old boy. By contrast, I was pleasantly surprised by the quality of the decor in the Royal Rooms.

There are two ways Disney could have gone with these rooms thematically: glitter, sparkles, and pinkification (new word alert) or stately, elegant, and regal. The former would be the cheaper way out, and would mean the rooms are more decorated than they are themed. 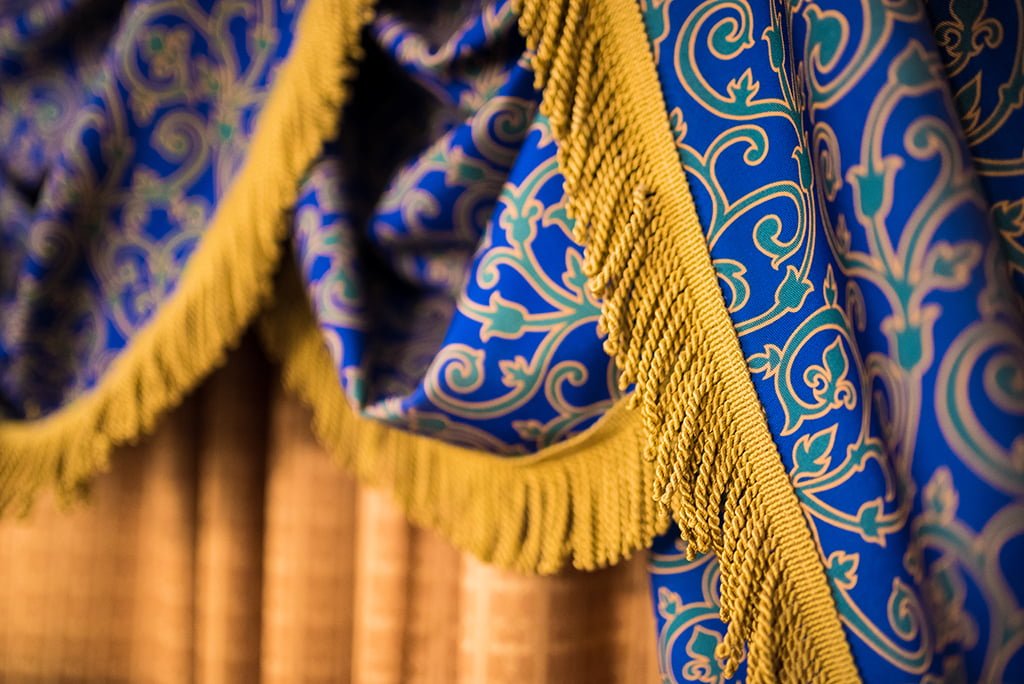 I was a bit surprised that Disney went the latter route, making the rooms truly Royal Rooms rather than simply Princess Rooms. In the wide view of the room and many of the details shots, you can see that nothing jumps out as “pinkified.” Rather, they look regal.

Most guests are probably going to call them the Princess Rooms, and these may not appeal to the princess-averse youngsters in your party, but there was effort put into keeping them fairly neutral. More importantly, effort was made to the finishing and detail of the rooms. Lots of woods, rich texture, and finishing make the rooms have an unexpected depth given the target audience. 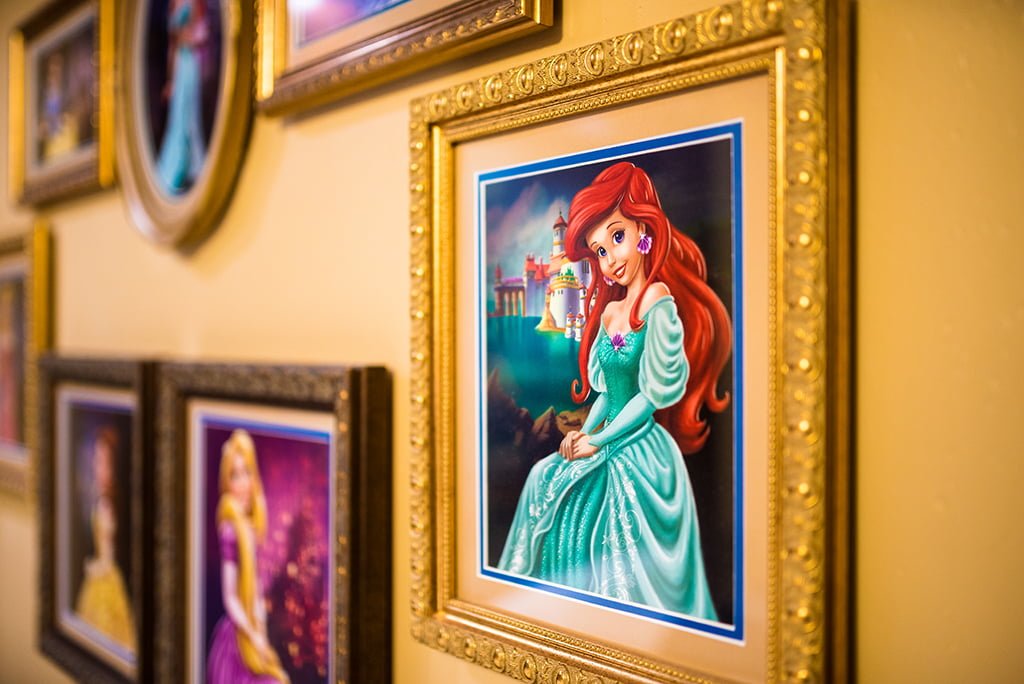 To be sure, these rooms still skew towards a younger demographic and this is reflected in the princess portraits (in which each of the princesses inexplicably received a spray tan for some reason) and some other decor around the room.

However, the room is not so over the top that it’s going to be eye-roll inducing to anyone over age 8. By and large, the rooms are tastefully done. 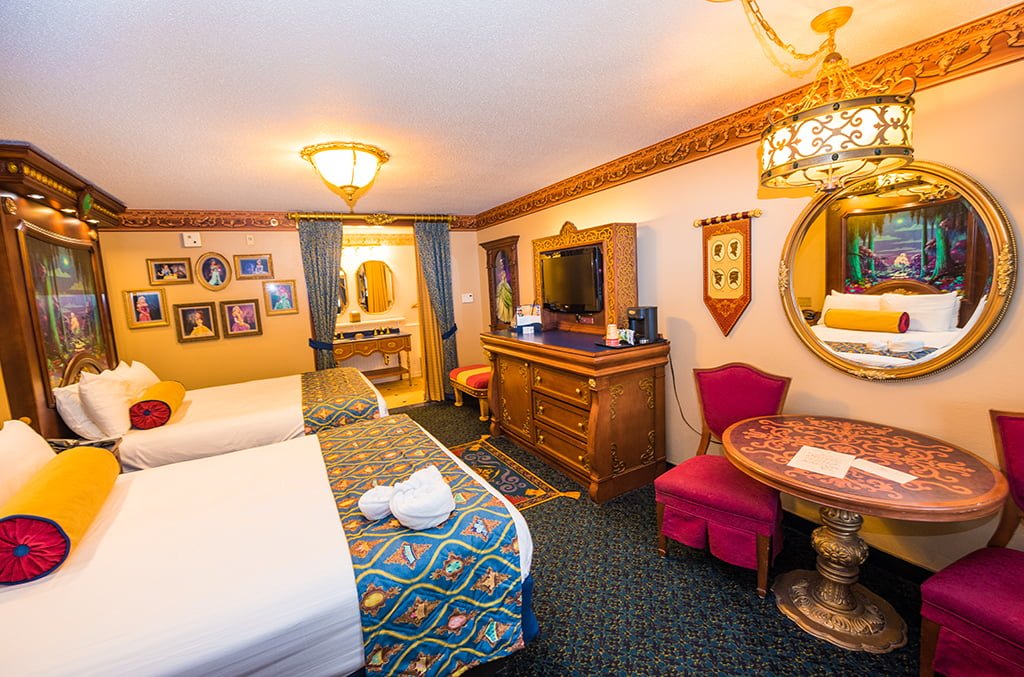 In fact, I could see this even being a good option for adults looking for a whimsical place to stay on their first visit to Walt Disney World. There’s no way I’d pick these rooms over those in Animal Kingdom Lodge (or elsewhere), but I realize everyone’s tastes vary–I liked the room a lot more than I expected I would.

I could see adults who identify Disney most strongly with its animated films getting a kick out of these. Same goes for anyone who has ever read any “news” articles about the royal baby. Sarah really liked the Royal Room and already wants to stay in them again. 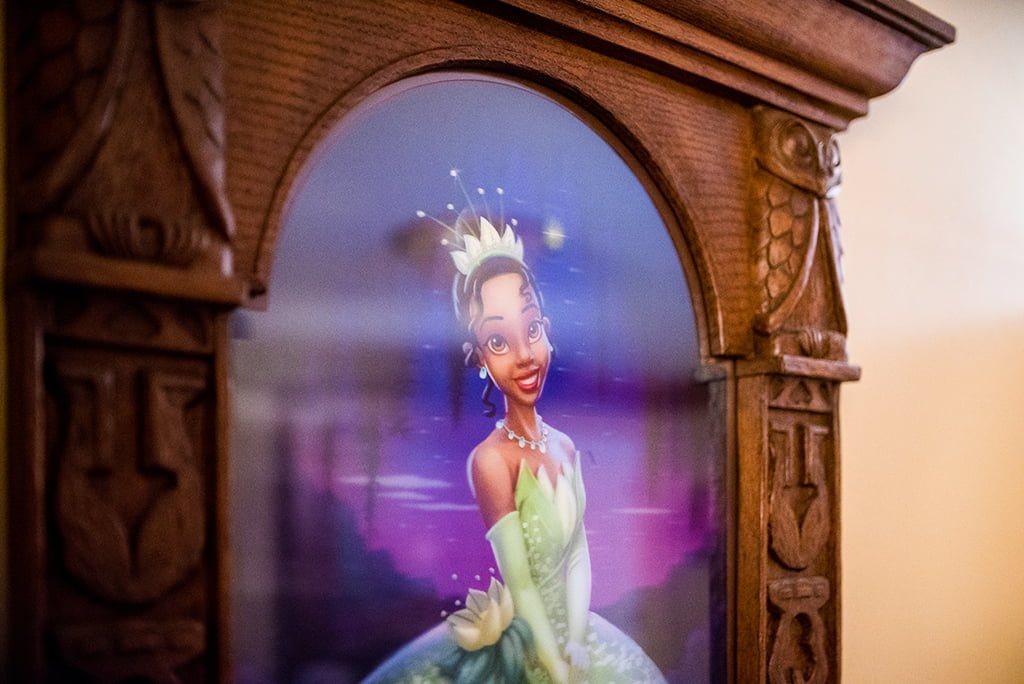 Since this is Port Orleans Resort, Princess Tiana is highlighted throughout the room. It’s too bad this and a meet & greet are about the only attention The Princess and the Frog receives at Walt Disney World, because I think it’s one of Disney’s best animated films, and criminally underrated.

(Update: Well, it seems like that’s going to change sometime in the next few years. Not exactly what I had in mind when writing that!) 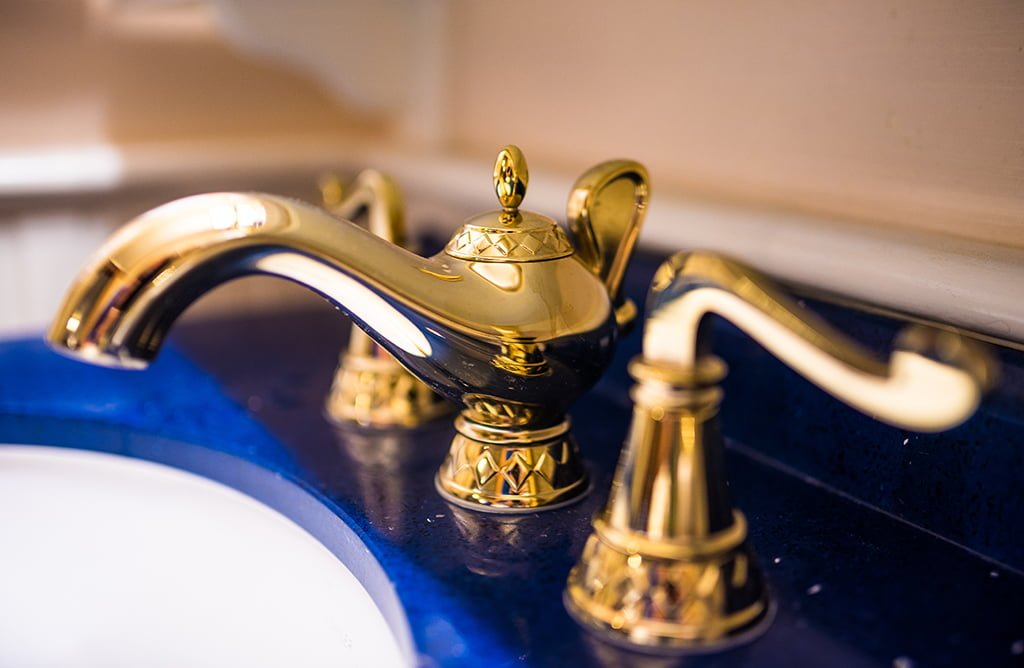 The attention to detail is no exaggeration.

From the ornate woodwork to the fiber optics in the headboard to the faucets and more. I’d be curious to see the per room construction costs of the Royal Rooms versus the Pirate Rooms. I’ll bet these cost 3-4 times to design and build above what the Pirate Rooms cost. 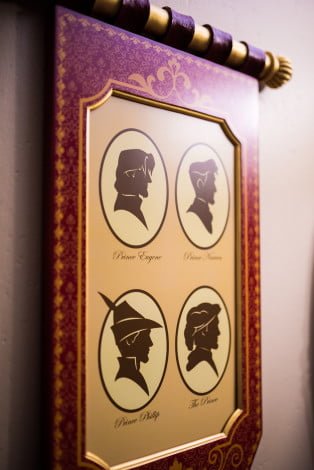 The princes are also repped. Interestingly, Beast’s character is referred to as “Prince Adam” in the room, which is a source of controversy among Disney fans. (No, I’m not kidding.)

While he was never referred to as Adam in the film, subsequent to that, he was referred to in official Disney products and releases as Prince Adam. Due to this, many claim Prince Adam isn’t actually his name, and is an urban legend or myth. I’m not so sure about that. It isn’t like some fan named him that and the errant info has spread on Tumblr, and it’s not like misattributing, “If you can dream it, then you can do it” to Walt Disney. Either Walt said that or he didn’t. Not quite the same here. 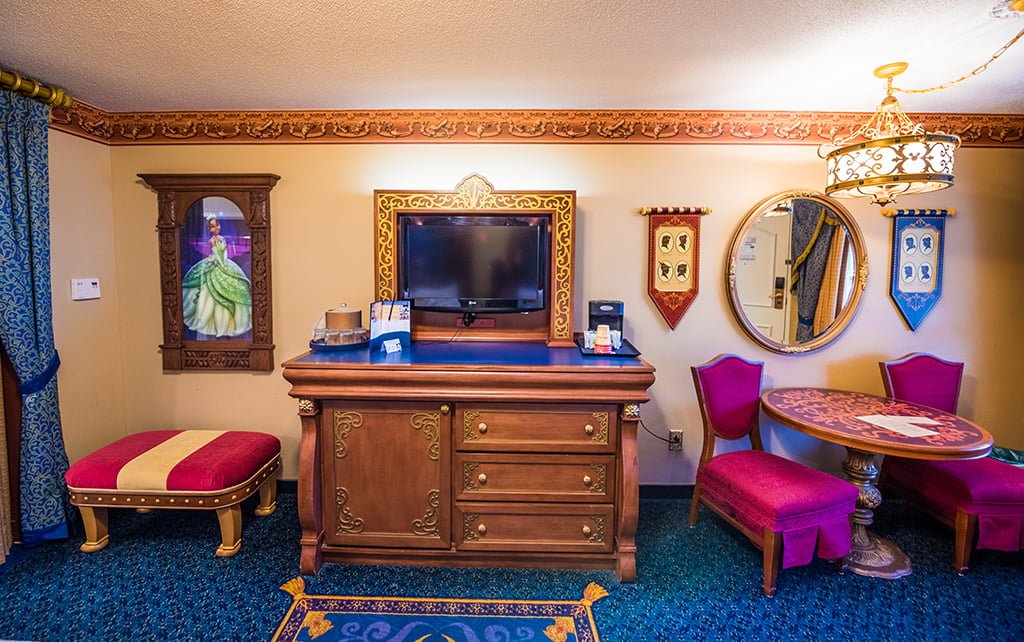 If Disney itself has since released additional information that does not contradict what was contained in the original film, that could be considered canon. Movie companies do this all the time–they’re called “sequels.”

In this case, it’s not a sequel, but it’s still Disney releasing information that’s consistent with the original film. I don’t really care one way or the other; I just find it an interesting controversy. Regardless, I digress… 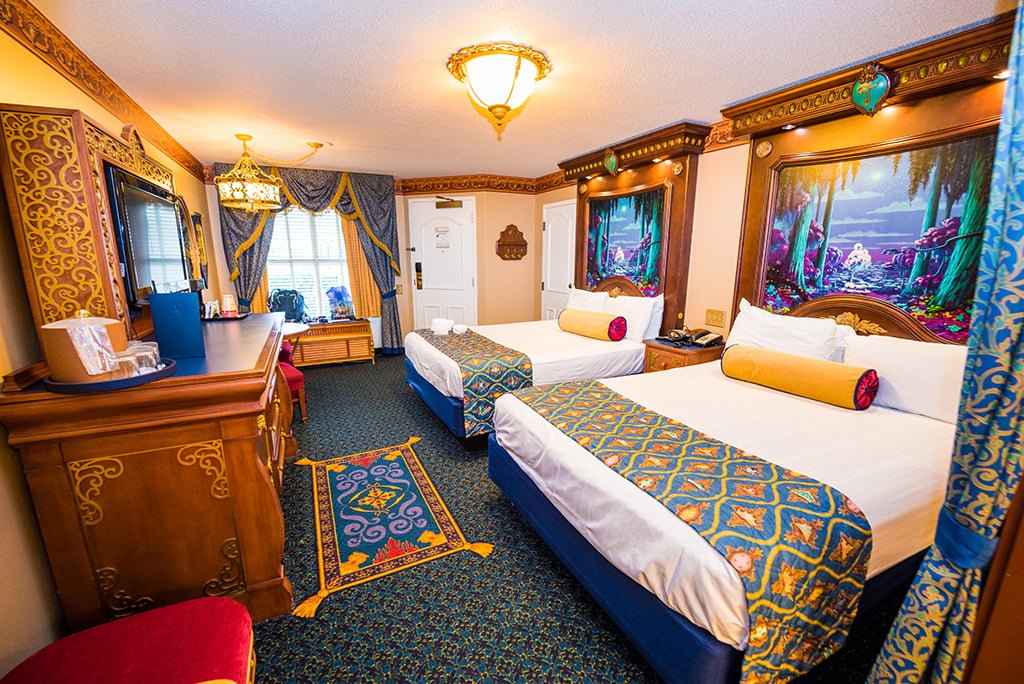 In terms of what to expect from the rooms, you’ve got the standard Moderate Resort amenities, such as mini-fridge and coffee maker. One downside is that the rooms sleep 4, as opposed to the 5 of Alligator Bayou rooms thanks to the pull-down bed in those rooms.

I spend a few hours working on my laptop early each morning before we head to the parks, and one plus is that those chairs were more comfortable than the normal in-room chairs. Not a huge thing for most, but might be a nice little “pro” for a few others. 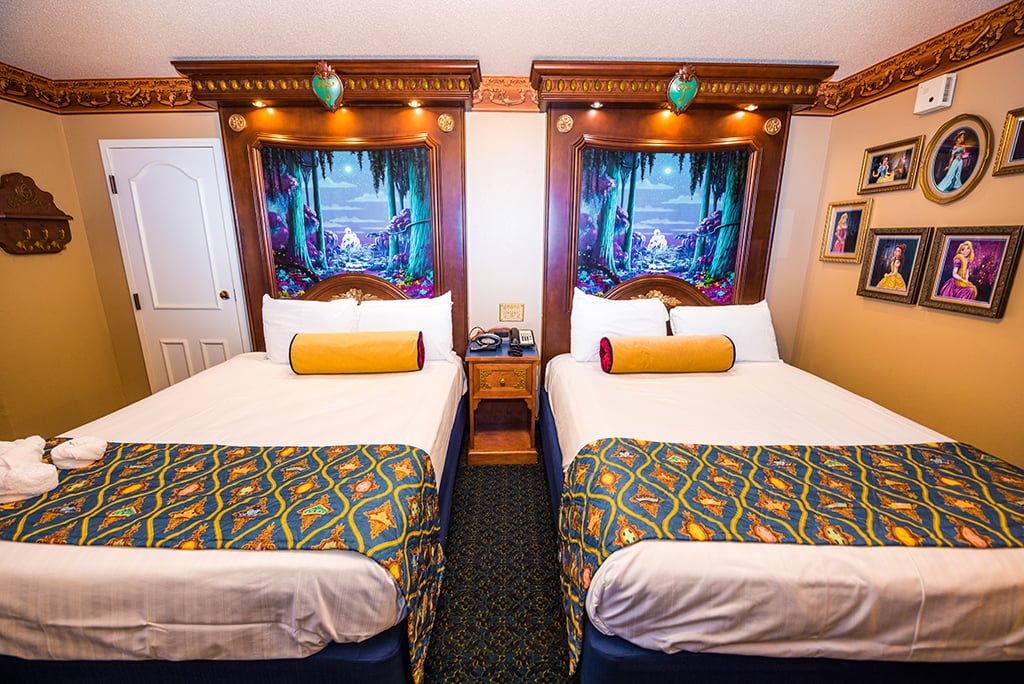 All Royal Rooms at Port Orleans Riverside feature two queen-size beds. There are no king bed rooms in this section, nor is there any space for extra roll-away sleepers.

In terms of bedding, these seemed about average for Moderates, meaning they are fine but nothing special. I’m so tired after a long day in the parks that I could have a great sleep on a pile of filled potato sacks. I think the mattresses in the Pirate Rooms might actually be filled with potatoes, so the ones in the Royal Rooms are a definite upgrade from those. 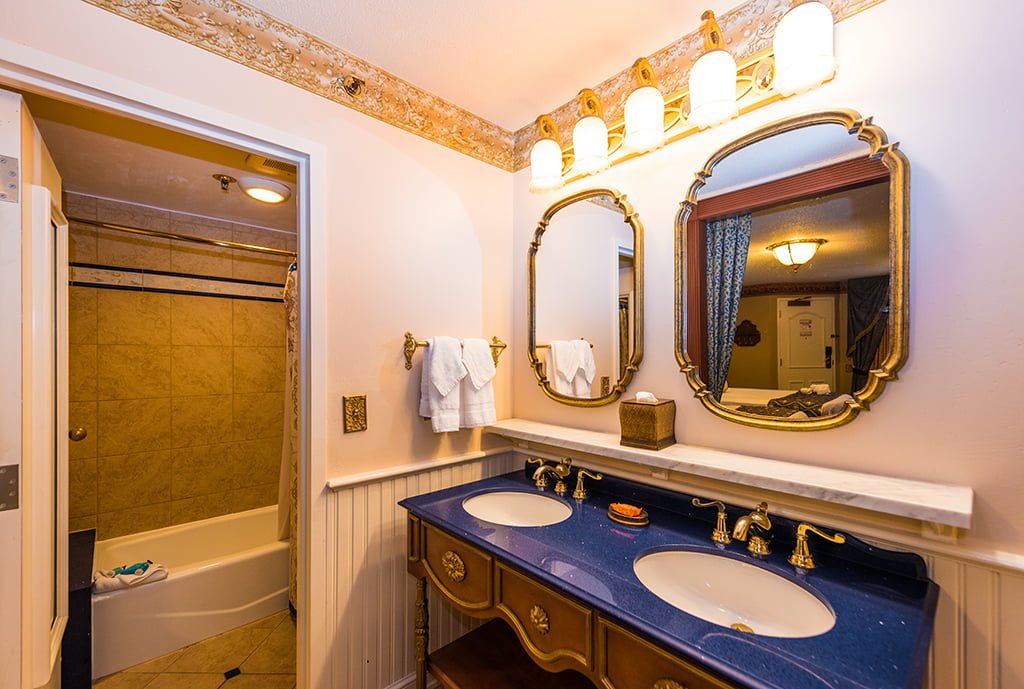 The bathrooms in the Royal Rooms are basic. There’s some nice accent work, and I love the faucets, but otherwise, this is all fairly standard.

This is one area where a refurbishment and modernization of the Royal Rooms would be welcome to improve the lighting and storage space in the bathrooms. 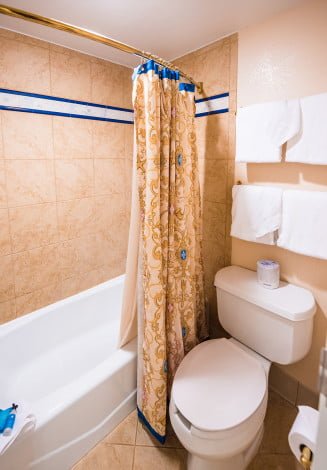 Same goes for the shower. No one strained anything dreaming up the design for the bathrooms.

Here’s a walk-through video of the Royal Room so you can get a better idea of how it looks, as well as those cool fiber optic headboards in action:

Overall, we were both very pleasantly surprised by the Royal Rooms. They aren’t something I’d do again for myself, but when we have kids, I could see them being a must-do. One of the main arguments in favor of Value Resorts is that “kids love them” despite the basic designs being off-putting for a lot of adults. I think the Royal Rooms do a great job of appeasing both kids and adults.

For the kids, you have the rooms themselves, which can also be enjoyed–or at least tolerated–by many adults. For adults you have the subtle theme and charm of Port Orleans Resort as a whole, which likewise can also be enjoyed by kids. As a result, I see the Royal Rooms as a great compromise and something to strongly consider for the sake of your kids–or royalty-obsessed adults.

Do you like the Royal Rooms, or do you think they are overpriced? Would you consider splurging on a stay here for the sake of your kids? What do you think Beast’s real name is? Planning on staying here someday? Do you agree or disagree with our assessment of the Royal Rooms at Disney’s Port Orleans Resort – Riverside? Any questions we can help you answer? Hearing your feedback–even when you disagree with us–is both interesting to us and helpful to other readers, so please share your thoughts below in the comments!