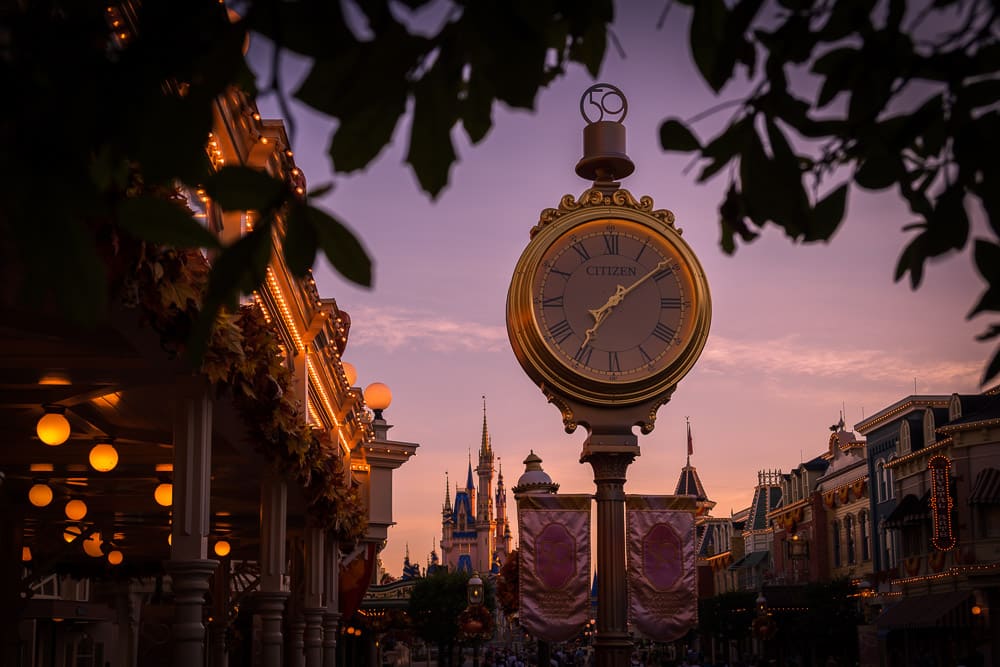 Magic Kingdom is now opening at 8 am on days when the park closes early for Mickey’s Not So Scary Halloween Party, a trend that will likely continue between now and December 2022 for Mickey’s Very Merry Christmas Party, as well. With this change, we set out to determine what we could accomplish during 7:30 am Early Entry and share the step-by-step results in this photo report.

Although moving from a 9 am opening time to 8 am might seem significant, it’s actually huge. For those of you haven’t followed our posts about park hours and Early Entry at the other parks, each extra hour in the morning is a big deal because it shrinks the pool of potential guests who are willing and able to get up early on vacation.

When park opening is at 9 am, there are a ton of people taking advantage of 8:30 am Early Entry because it’s relatively easy to be out the door and to Magic Kingdom by that time. It’s a different story entirely when moving that forward by an hour–especially for the families with small children to whom Magic Kingdom and its Fantasyland headliners most appeal.

This isn’t just conjecture or speculation. We’ve seen exactly this scenario play out at the other 3 parks since the start of spring, where Early Entry everywhere else is so much more productive because fewer guests can and will take advantage of it. Once EPCOT and Disney’s Hollywood Studios moved their opening times up to 8:30 am, that was a game-changer for Early Entry. Over at Animal Kingdom, the perk has always been great thanks to that almost absurd start time.

There’s also past precedent at Magic Kingdom. The halcyon days of Extra, Extra Magic Hours starting at 7 am during the initial launch of Star Wars: Galaxy’s Edge were gloriously uncrowded. Ditto the days around Christmas, New Year’s Eve, Easter, and other assorted peak season dates when Magic Kingdom used to open before sunrise to help with crowds.

It’s the same story again and again–early opening, lower crowds. Most people do not get up this early on what’s supposed to be a “vacation.” Simple as that. 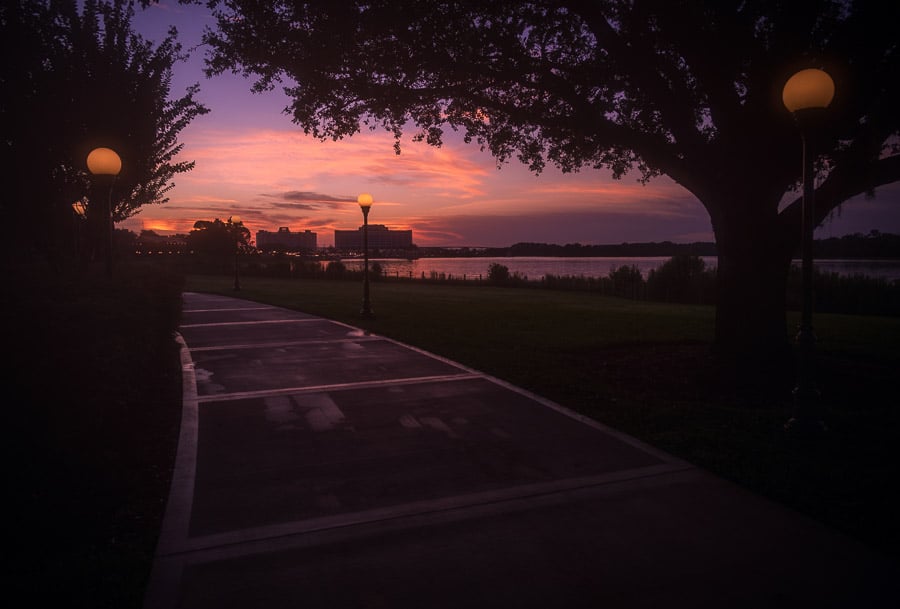 Our normal recommendation is to arrive at least 30 minutes before the start of Early Entry, which is typically good enough for Magic Kingdom. On this particular day, I walked over from Grand Floridian and arrived at the turnstiles just before 7 am–they opened a few minutes later.

Upon reaching the end of Main Street, you’ll see Cast Members with signs direction guests to the right for Early Theme Park Entry. This works exactly the same as morning Extra Magic Hours, if you remember those. Anyone can continue to Cinderella Castle or the regular rope drop locations outside Liberty Square and Adventureland. I always like to go get an empty park shot of the Hub. 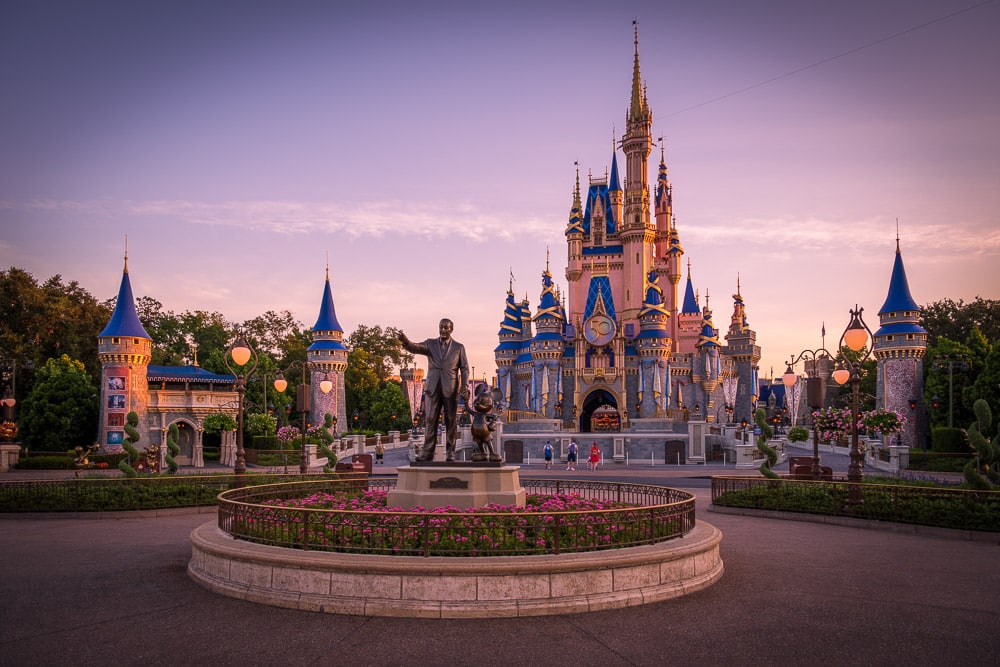 There’s a row of Cast Members stationed by the East Plaza Gardens to scan MagicBands, MagicMobile, resort room keys, or whatever identification you might have if staying at one of the participating third party hotels.

You can’t access Tomorrowland or Fantasyland until you’ve entered through here. Once you’ve done that, you’re good to go for the morning–unlike Extended Evening Hours, MagicBands or room keys are not scanned at each individual attraction. From there, you proceed on to either the Tomorrowland Bridge or Fantasyland Bridge. 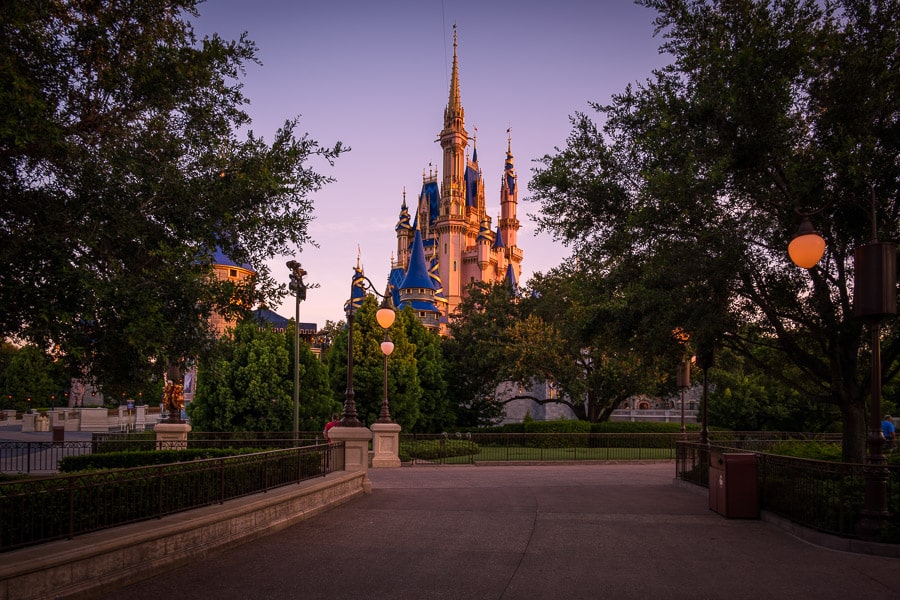 The crowd is always smaller for Tomorrowland. This is “less true” with the 7:30 am start time for Early Entry–there’s a difference, but it’s not nearly as pronounced. We usually “joke” that Fantasyland guests are revving up their double-wide strollers, preparing to do some serious damage to the ankles of anyone walking too gingerly. The sprint to Seven Dwarfs Mine Train is a high stakes, eat-or-be-eaten game.

We did Early Entry at Magic Kingdom prior to this party day on a normal weekend day. I should’ve played “count the strollers” on the two days. Regardless, I can say with utmost certainty that there were far fewer (even as a proportionate measure of the smaller crowd) on the 7:30 am day. Again, this is likely a matter of families with small children having a tougher time getting to Magic Kingdom at this hour. 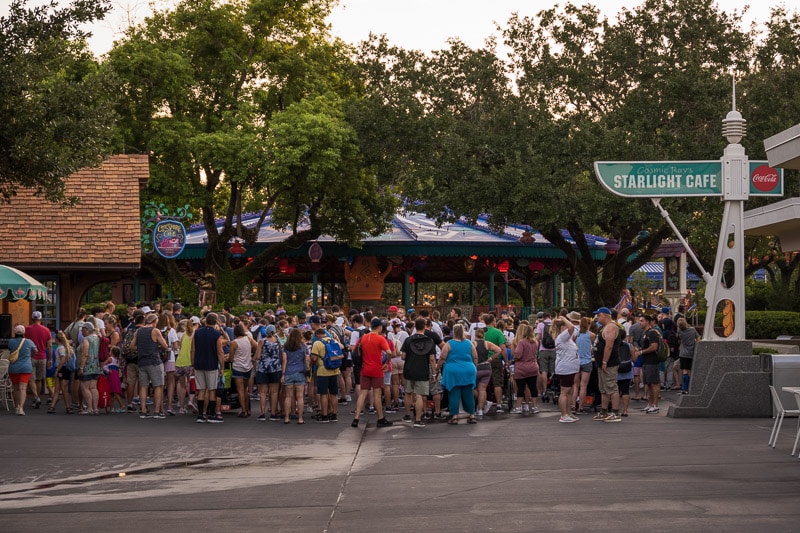 With 15 minutes until the start of Early Entry, I headed to huddled crowd gathered outside Cheshire Cafe. It was here that I had a few moments to dig deep and reflect upon the sage wisdom of the celebrated thinker Connor4Real: never say never again.

It was only a few short weeks ago when I doubled-down on my advice imploring you to “skip the SDMT Shuffle,” calling it uncomfortable and unpleasant. I went on to assert my expertise, saying we’ve done Early Entry and rope drop dozens of times at Magic Kingdom in the last two years, and “you won’t convince me Seven Dwarfs Mine Train is the best way to start the day.”

This morning, I was beginning with Seven Dwarfs Mine Train, convinced it was the best way to start the day. 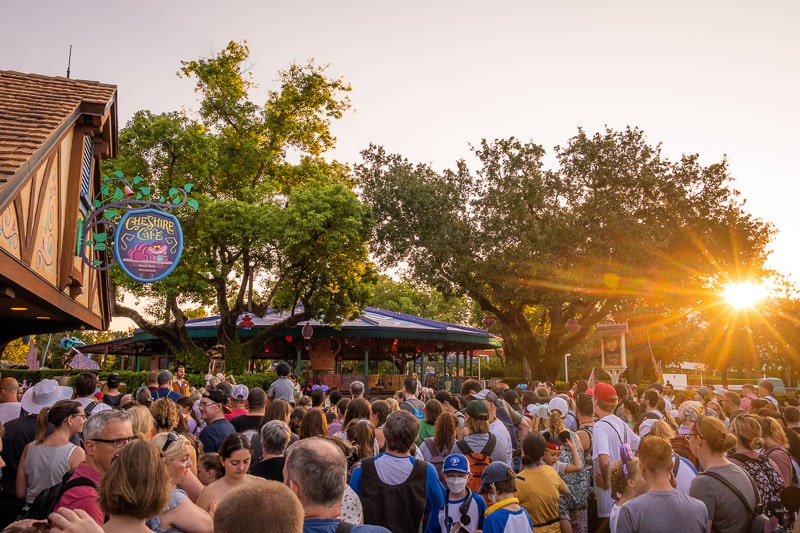 The key distinctions here are the earlier opening and closing times, plus the lower crowd levels throughout the entirety of the day. In short, less competition and a lack of better alternatives could make an outcome-determine difference–that’s what I was here on this day to test. 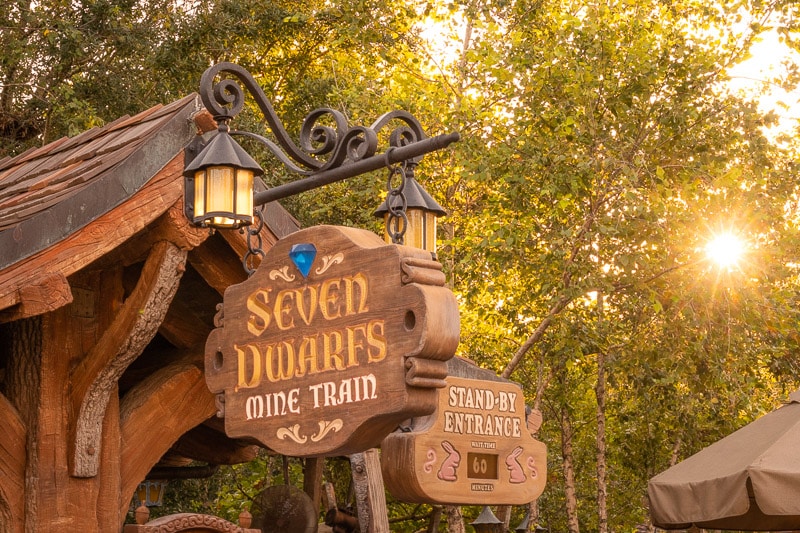 In any case, I shouldn’t have been so steadfast in my statements that it’s always a bad idea to be part of the SDMT Shuffle. Usually is not always. There are exceptions to any rule, and you should always consider your personal circumstances, priorities, yada yada yada. The point is that I’m not infallible.

Anyway, without Sarah here to help me test optimal approaches, I was on my own to capture photos and do the ride-riding. 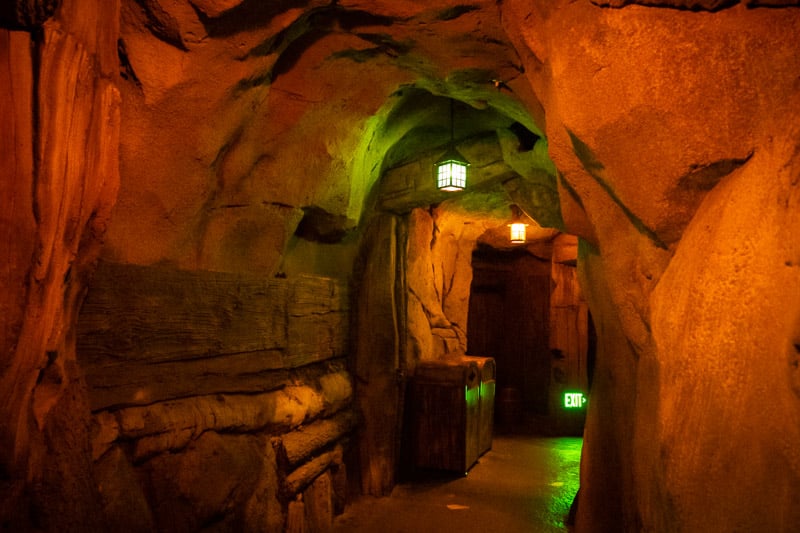 Just as any other day, the SDMT Shuffle took place, but it was quicker moving and less competitive.

Still chaotic with the line quickly forming in a poorly-organized, amorphous fashion outside the attraction before narrowing as it headed into the queue proper–much like the Haunted Mansion line coming out of the Stretching Room. 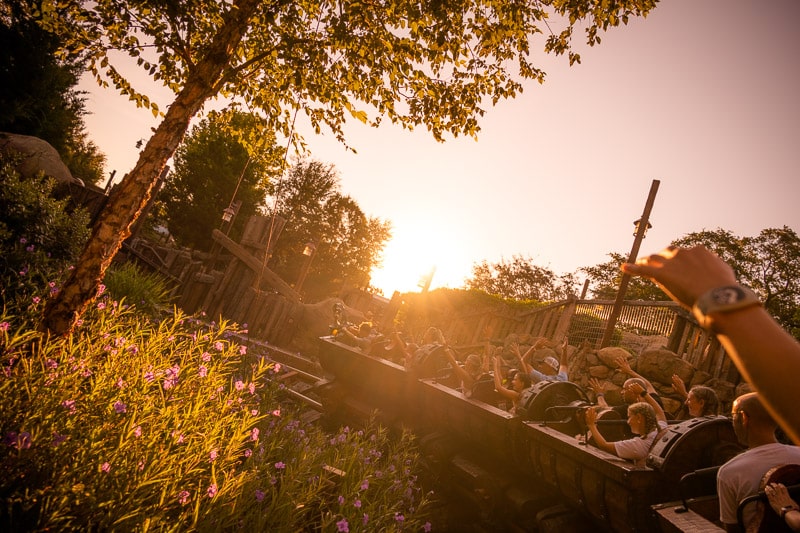 I was past the marquee and into the proper line for Seven Dwarfs Mine Train at 7:34 am.

My actual wait time was 12 minutes, which probably would’ve been 15-20 minutes if I took a leisurely pace and was at the very back of the small crowd. Not bad, no matter how you slice things. It also helps that the sun was still low in the sky, so the outdoor queue was bearable.

With the sun flittering through the trees and beautifully side lighting buildings in Fantasyland, I tried to take photos on the ride. That was largely a spectacular failure–dozens of photos that are either out of focus, have hands prominently in the frame, or both. Oh well, can’t win ’em all! 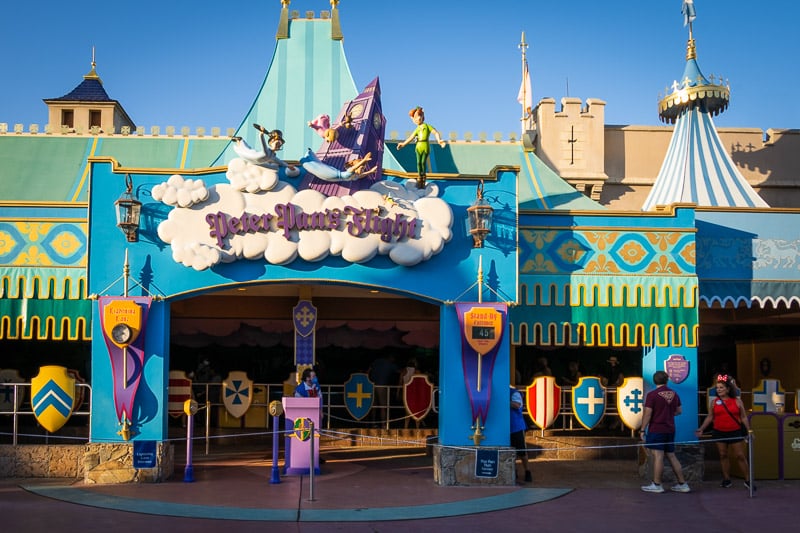 Next up was Peter Pan’s Flight, where I entered the line at 7:53 am.

The people in the photo above were debating aloud whether they should do it, with the woman skeptical that the wait time was actually 45 minutes. 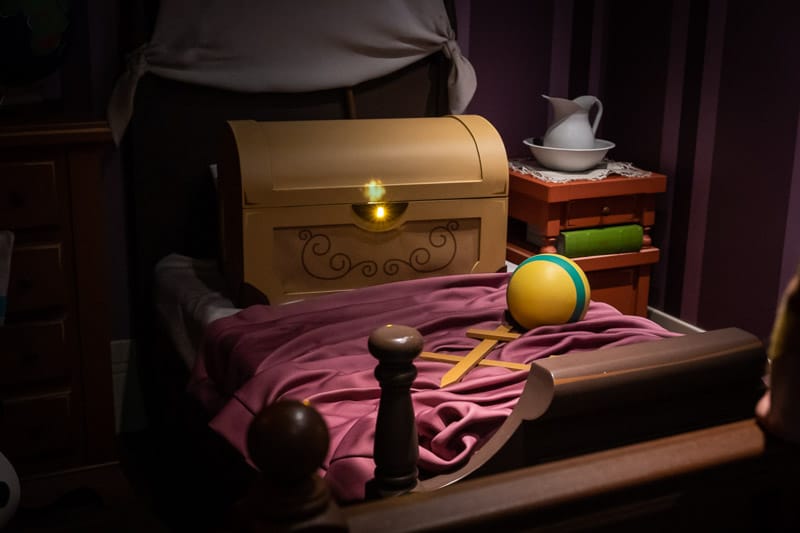 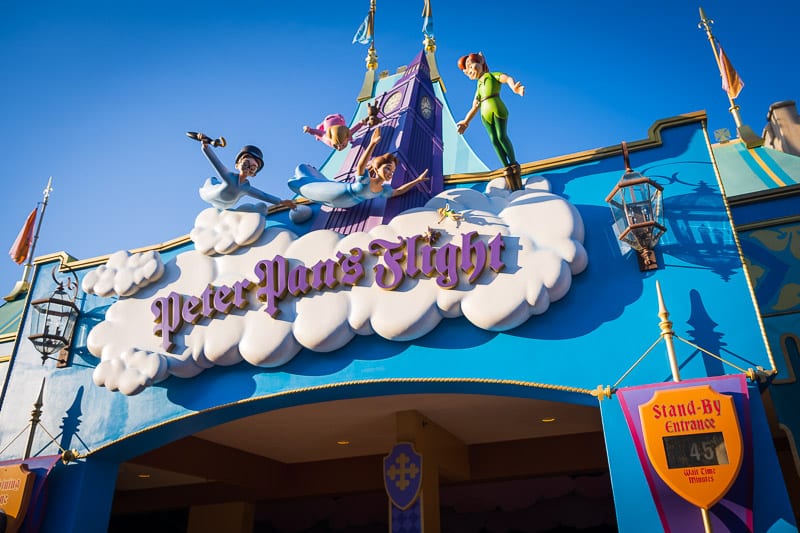 The posted wait time was still 45 minutes, which was very obviously still wrong. I’m guessing I could’ve done it again with an actual wait time under 15 minutes.

I noticed multiple guests balking at this continuing on for “shorter” lines, which was likely further exacerbating the discrepancy between the posted and actual wait time. When almost everything else is 5-10 minutes, people aren’t going to opt for the 45 minute long attraction, even if it is Peter Pan’s Flight. (And even if the sign is wrong–most people wouldn’t know that this couldn’t possibly be right.) 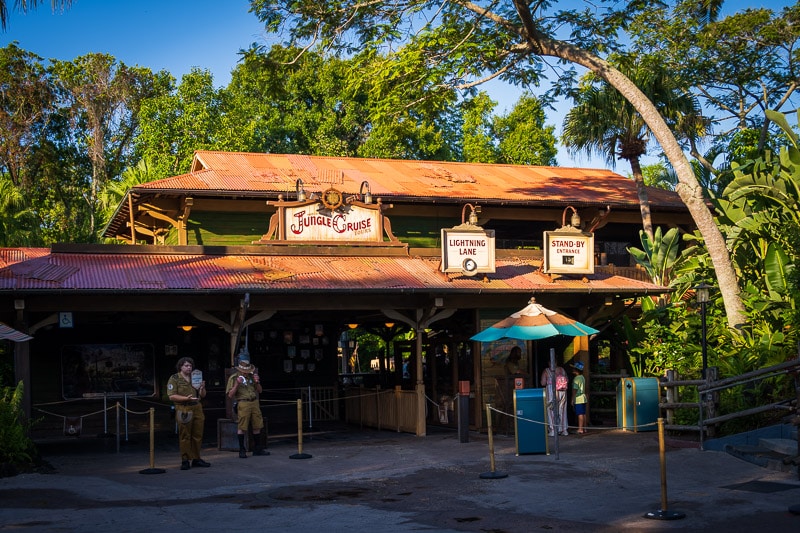 I’d normally pass on Jungle Cruise and head straight to the mountains of the frontier.

Given the low crowds and early time, I decided to give it a shot. The posted wait time was 15 minutes, and my actual wait time was however long it took me to walk through the mostly-empty queue. I was off before 8:25 am. 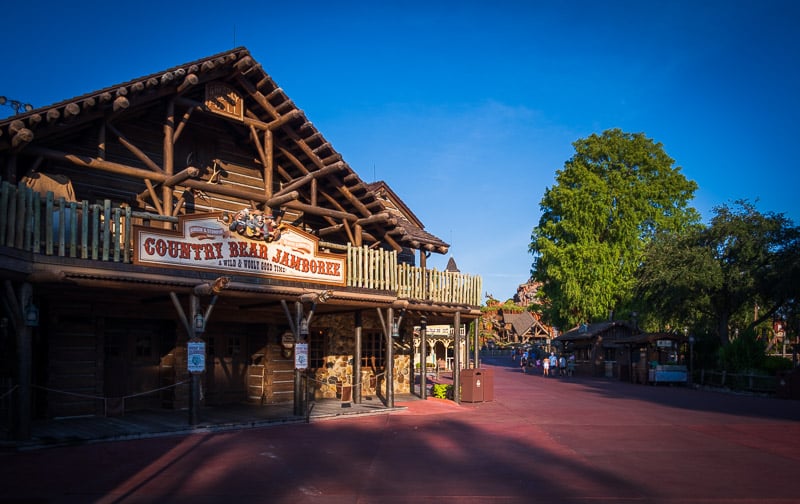 Following that, I cut through Adventureland and headed back to the Wild West, which was a veritable ghost town. Fitting.

If I were going for convenience or fewer steps, I would’ve knocked out Pirates of the Caribbean first. However, I didn’t have Genie+ this day, and wanted to accomplish as many high profile attractions as possible to avoid slow-moving standby lines. 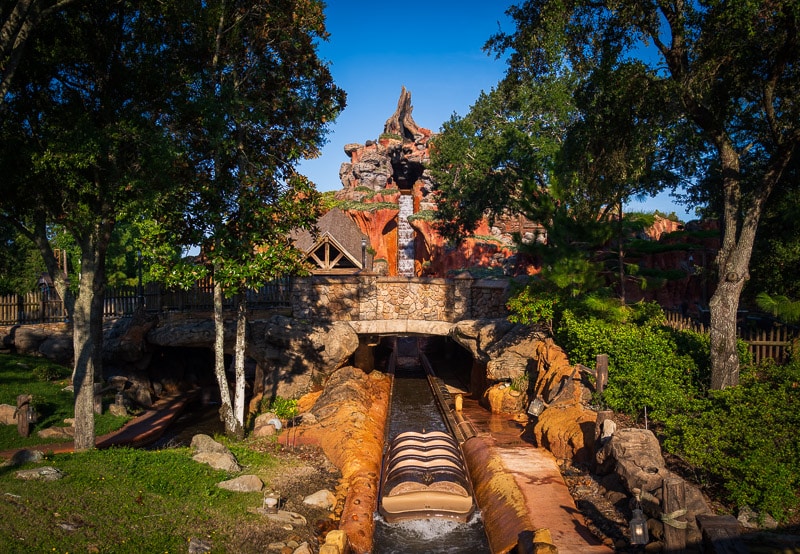 I’m not sure if Splash Mountain had a delayed opening and I got lucky, or if it really was still cycling empty logs. 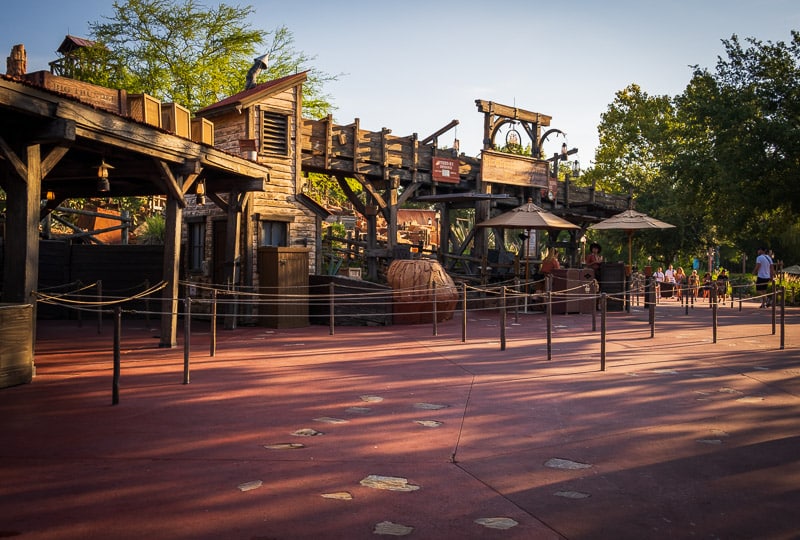 Next up was Big Thunder Mountain Railroad, which was absolutely overwhelmed by the colossal crowd. Ghost guests, of course. 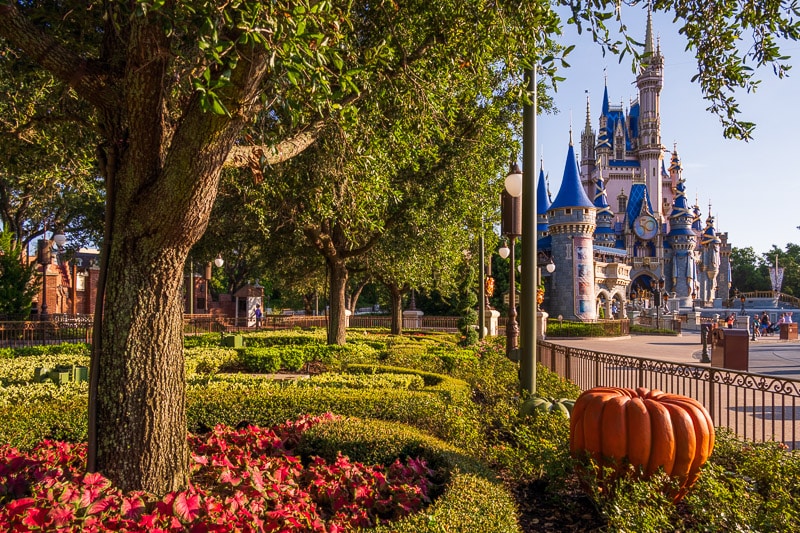 At this point, rope drop was more or less over and Magic Kingdom was transitioning to ‘normal morning on an uncrowded day.’

I’ll be back with everything that encompassed via standby lines, including repeating several of these attractions (relevant for those of you who are not eligible for Early Entry). 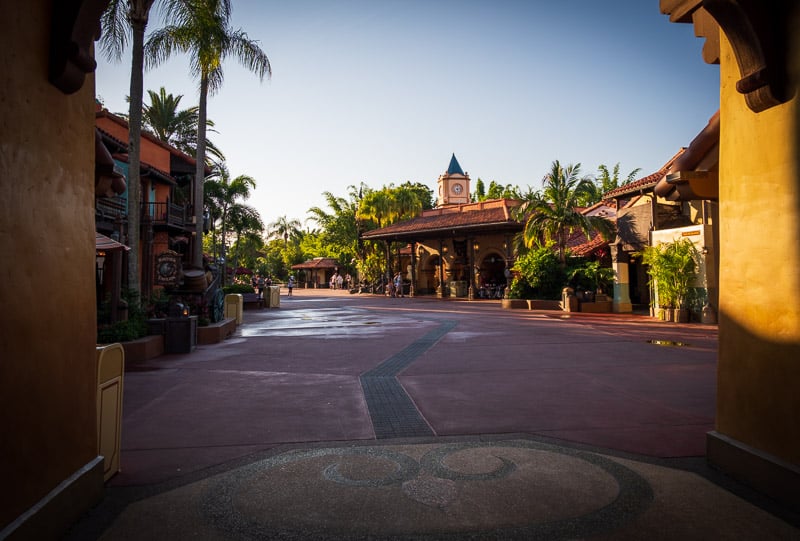 All told, here’s what I accomplished between 7:30 am and ~9 am via Early Entry and rope drop at Magic Kingdom:

Going by posted wait time data, those attractions should’ve taken me 326 minutes in total. That number is probably actually more like 200 minutes. So, I’d say 120 minutes (adding my arrival time to the total) minus photo time and enjoying sunrise in Magic Kingdom was well worth it. 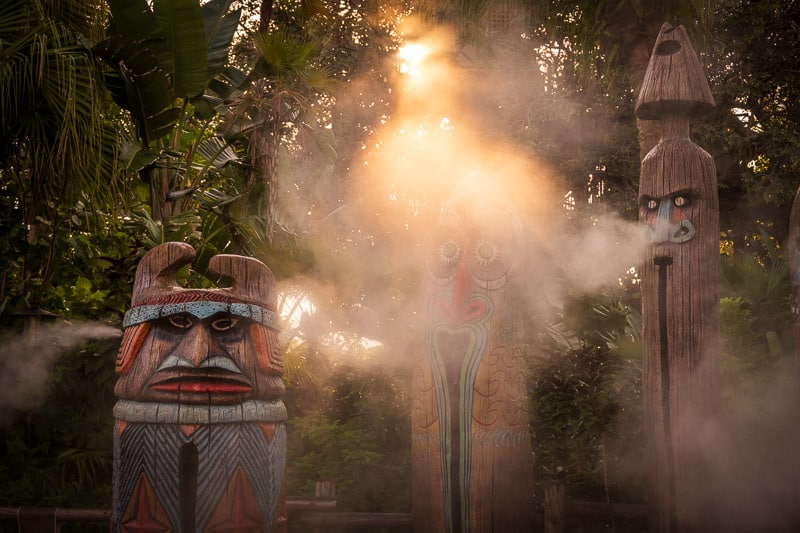 Usually, I end these Early Entry reports with a comparison to Genie+ on the same or a similarly-situated day. However, I recently covered this in My Day at Magic Kingdom Using Genie+ on a Party Night.

While it’s true that I did accomplish more than this via Genie+ during a party day at Magic Kingdom, the conclusion of that post already “spoiled” the analysis here–that Genie+ is not necessary at Magic Kingdom during the daytime hours prior to Mickey’s Not So Scary Halloween Party. The “why” of that will become crystal clear once we get to the ‘normal day’ portion of this visit. 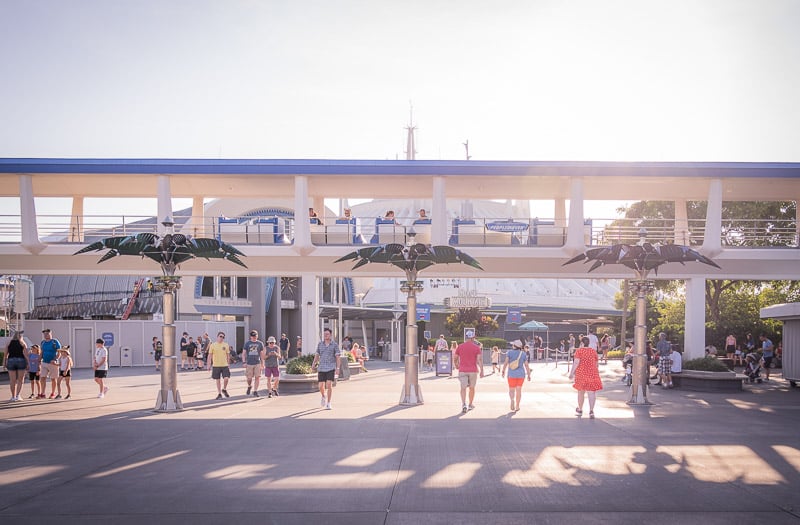 Ultimately, we highly recommend taking advantage of Early Entry at Magic Kingdom on days when Mickey’s Not So Scary Halloween Party or Mickey’s Very Merry Christmas Party is being held. For one thing, this is going to be the only way to efficiently experience Seven Dwarfs Mine Train on those days, since jumping in line at the end of the night isn’t a possibility those dates.

For another thing, the 7:30 am start time coupled with the lower crowd levels at Magic Kingdom during the daytime hours of party nights makes Early Entry and rope drop even more advantageous than normal. If you use savvy strategy for Fantasyland during Early Entry and pair that with traditional rope drop for Frontierland and Adventureland, you can have a solid start to your morning at Magic Kingdom. Even with the 6 pm closing, it is possible to accomplish a full day’s worth of Magic Kingdom attractions without buying Genie+ or Individual Lightning Lane access. Now that’s impressive efficiency

Thoughts on Early Entry at Magic Kingdom with the 7:30 am start time? Have you experienced this 30 minute jumpstart to the day prior to Mickey’s Not So Scary Halloween Party or Mickey’s Very Merry Christmas Party? What’s your preferred approach to Early Entry and traditional park opening/rope drop at Magic Kingdom? How would you have done things differently? Any other feedback on arriving early to the Walt Disney World theme parks? Agree or disagree with our advice or approach? Any questions we can help you answer? Hearing your feedback–even when you disagree with us–is both interesting to us and helpful to other readers, so please share your thoughts below in the comments!